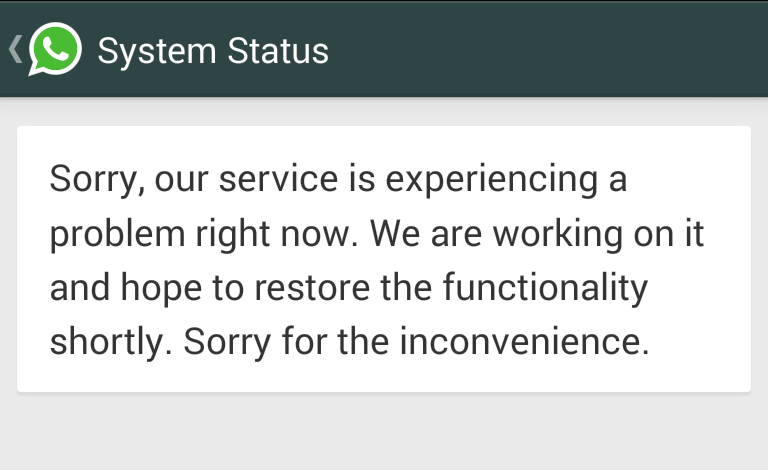 Last Saturday, WhatsApp suffered a four-hour outage in their services that affected all users, provoking the exodus of more than 5 million users to Telegram, its newest competitor, to the point that Telegram itself also suffered an outage due to its infrastructure not being able to support the more than 100 new registrations per second coming in.

After several outages within just a few minutes throughout Thursday and Friday, on Saturday at 19:00 GMT the service temporarily went down. The only explanation given by WhastsApp came via a curt tweet and a message in the Settings > Help > Service Status section within the app itself, by all accounts an insufficient explanation given the impact so enormous at all levels that it could provoke the temporary outage of a service used by more than 450 million people. After the service restoration, the company’s CEO, Jan Koum, released a statement apologizing for the problem, qualifying it as one of the most serious events in WhatsApp’s history. With regards to the cause of the problem, few details have been given, with the blame thrown on a failure of one of the routers responsible for server traffic that provoked a chain reaction throughout the rest of the infrastructure.

sorry we currently experiencing server issues. we hope to be back up and recovered shortly.

Koum also announced yesterday at Mobile World Congress in Barcelona (Spain) that WhatsApp will add voice services later this year, a service that other instant messaging apps, such as Line, are already offering.

The rise of Telegram

The side effects were immediate. Over the past few weeks we’ve seen how the IM service Telegram won followers at a dizzying speed. In the face of the WhatsApp outage and its recent acquisition by Facebook, the lack of trust and information flying among users provoked a massive migration to Telegram, which ended up with 5 million new registrations during the hours after the incident.

This is crazy. We'are getting 100 new registrations every second. Trying hard to prevent connection issues in Europe.

Telegram found itself so overwhelmed by users that during the same Saturday it suffered a two-hour outage itself when it was unable to absorb so much information entering its servers. When Facebook announced the acquisition of WhatsApp, only 500,000 “unhappy” new users accompanied this business move, when a million new registrations per day had been predicted this week. Given what we’ve seen, they fell far short.

Look out for the opportunists!

As in any case of bad luck, birds of prey always appear to take advantage of those affected. Fake chain mails have been the first trick to appear, with the graphic below displaying some completely false ones that push you to resend the message to your contacts to get around the WhatsApp shutdown or paying fees, or for access to “premium” account services.

But the main fraud is found in the suggested publicity on Facebook, which in recent days has suffered a rise in fake content that redirects you to download fraudulent apps for your smartphone under slogans as provocative as: “Want to know how to see the conversations of your friends on WhatsApp? Discover how here!” I repeat: All these ads are completely fake, and I urge you to always consult official sources to check your information.