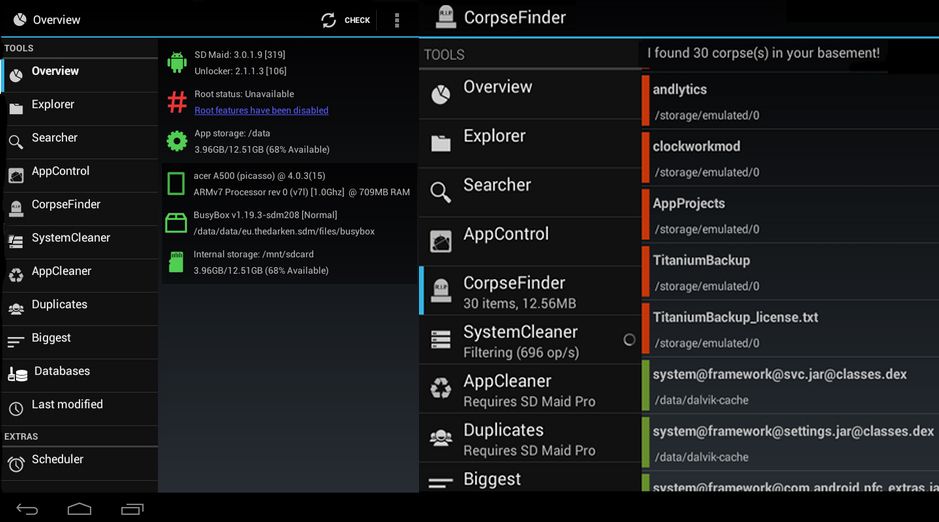 A very common problem among users of mid-range Android devices is that memory space gets used up quickly, and thus they can’t install apps nor update the ones they already have without making their device’s performance even worse. This happens because of the build-up of trash files when you don’t uninstall apps properly or clear out your temporary files. Here we introduce a few apps that can help you avoid this happening and keep your smartphone clean.

This is perhaps the most popular tool and the one that you certainly know for its desktop version. We’ve already talked here about its Android version but just to refresh your memory, among CCleaner’s main features are that it deletes temporary files, including your cache, your browser history, and the call log to get rid of all that useless data that hogs up space. It also allows you to manually delete the junk generated by services like Facebook, Twitter, or WhatsApp. Another feature of CCleaner is its app administrator; it’s true that this functionality comes integrated into Android by default, but from this app it’s more accessible. The user will directly view all apps along with the total space they take up, and will only have to tick the ones to be uninstalled, including some services blocked by Android.

We’ve also done an analysis of this app on the blog. Basically, Clean Master has the same features as the previous program, taking care of clearing the cache and junk files to improve the device’s performance. Its tools are divided into four blocks: Junk files, Privacy, App Manager, and Memory Optimizer. The latter is what makes Clean Master stand out, since, besides freeing up space on the phone with the other three tools, it can free up RAM by closing services that are running, a task that, without this app, has to be done with extreme care and knowledge of what you’re doing. Clean Master also offers a small quick-clean widget where you can view the amount of free memory and the amount in use, with an express method for deleting junk without having to go into the options.

This program might be the most complete of all since it offers up to 14 small tools dedicated to improving the performance and health of your device. All-in-One Toolbox is divided into three sections where you can access the device’s details—such as memory on the RAM, ROM, or SD card, CPU usage, and battery status—as well as the open processes which you can close with its task-killer and the optimization features. Among these utilities you’ll find options to clear your cache, browser, calls, and SMS history, as well as delete junk files from the memory card, a file and app manager to move things from the phone to the SD, a program installer and uninstaller, and, if your phone has been rooted, a tool to control which apps start when you turn on your Android.

Up to this point we’ve been talking about optimizing your Android but not about how to clean the memory card that also accumulates useless data. Although this feature also appears among All-in-One Toolbox’s utilities, SD Maid is dedicated exclusively to this. If you’ve had several phones and used the same memory card you’ll probably find an infinite number of folders with the names of apps that you no longer have installed. You can delete these manually from device’s file manage, but what about those folders with weird names that you don’t know whether to delete? This is where SD Maid comes in: it exhaustively examines the entire memory card with the aim of finding empty, obselete, or junk folders to help you delete them with a simple click. The app also has additional features such as a general viewer for the phone’s information, a file explorer, a search tool, an oversized-file tracker, and an app control panel to see hidden apps and vice-versa. Nevertheless, the two most interesting utilities are the CorpseFinder and the SystemCleaner which will erase from the card both the junk files and the temporary files or useless image thumbnails that fill up your external memory.

Finally, another interesting program is App Cache Cleaner, which, as its name indicates, takes charge of improving your Android’s performance by deleting the cached data that each app stores and that uses up your phone’s space. The way it works is very simple: It loads a list of installed utilities to show which ones are running and how much memory they are using, and then you can press the “Clean All” button. The small detail that makes it really useful is that you can program it to run every now and then automatically so you never have to worry about remembering to give your smartphone a good clean.

If you need more tips on how to free up space on your phone, here are a few more.