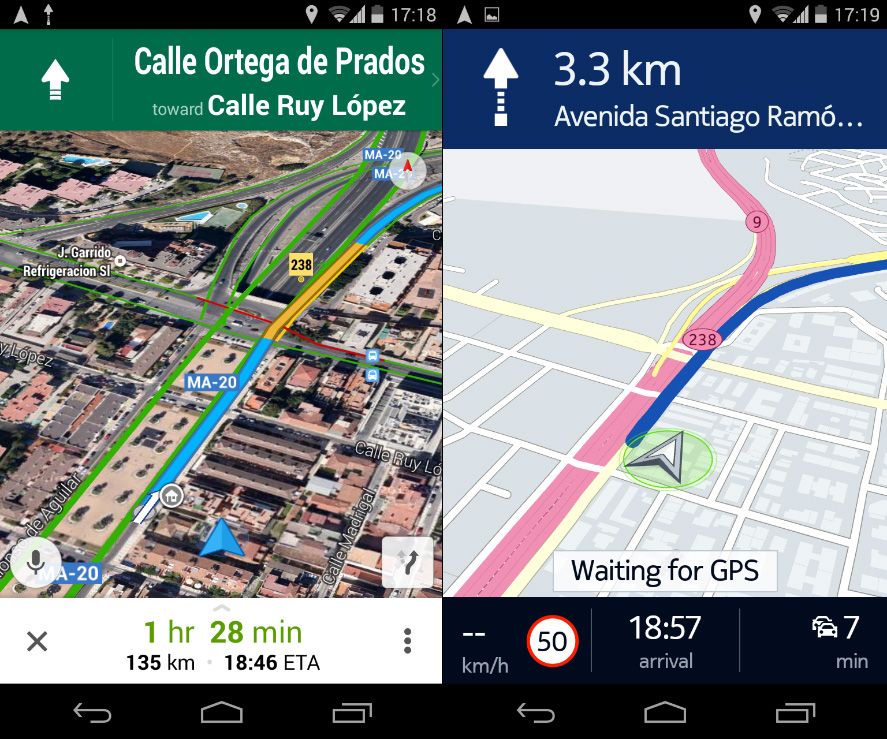 HERE Maps has recently arrived on the scene with the leak of its Android client as a direct competitor to the maps and geolocation tool offered by Google on Android. Even though HERE Maps is still in beta, comparisons are nevertheless inevitable. And surprising as it sounds, the Nokia tool has a few tricks up its sleeve that even its unshakeable competitor Google Maps doesn’t possess. The comparison below will delve into some of the most important features of each app.

Activating your device’s GPS and verifying your location is the most basic requirement of this sort of app. If you do it in Google Maps you’ll have the option to click on the button for nearby attractions to see museums, stores, and lodging near your location, as well as the temperature and weather where you are. And if you hold your finger down on a different spot on the map, you can also see how long it will take you to get there.

In the case of HERE Maps, if you click on your location a context menu will open displaying your exact address and three main options: One link to driving directions, another to add the place to your favorite, and another to use the point in Glympse, a service integrated into the tool to create events and set up get-togethers with your friends in specific places. Google has an important advantage in that it’s based on Google Earth and can thus offer a 3D browsing screen that includes comprehensive models for many important cities. But if you exclusively use Maps, it goes down a notch in comparison as it offers only a flat satellite view alongside the traditional maps, although in both cases you can customize the superimposed layers of information.

HERE Maps is much more specific in that regard, offering three basic, well-differentiated layers: transport, traffic, and map. The latter lets you view all buildings volumetrically, meaning that even though it doesn’t have textures, it will still make it much easier to get oriented in new places. Likewise, in map mode you’ll also find certain iconic buildings modeled in greater detail. These days it’s practically impossible to do better than Google, with its vast database of establishments and services. Thus the number of location nodes you can find on Maps is far higher than on HERE Maps or any other app. The image below compares the extended info that appears on the screen when you click on a particular node. The integration of Google services allows you to see user reviews, several photos of the location, as well as more detailed information on the type of establishments. HERE offers similar content but not as detailed information. At the moment, in both cases the apps are in beta phase, although they are fully functional. Google Maps displays the map in satellite mode and shows traffic conditions in real time alongside your estimated arrival time. It’s also possible to view the indications for the next turn beforehand and even search for alternative routes on the go.

The experience on HERE Maps is very similar and the info is practically the same, with a few extra goodies such as the speed limit of the road you’re driving on. At the moment the only handicap is that the voice giving directions is only in English, whereas in the case of the Google app you can get many other languages. Obviously, this is not a fair comparison, since the HERE Maps app is a preliminary beta that has yet to be publicly distributed by Nokia, although the app has already been leaked. Nevertheless, it surprises in the level of clarity and precision of its approach in comparison with how baroque Google Maps has started to get with the constant inclusion of extra features.

For all these reasons, it’s worth giving HERE Maps a shot: Although it can’t compete with Google in terms of the amount of content integrated into the service, it might prove an interesting alternative if you’re looking for a tool with a clear interface and more specific features. And given how technology has been going in recent times, apps that do just one thing but do it well are gaining ground over more multipurpose apps.