Home Tops and Comparisons Microsoft Edge vs Google Chrome in 2022: comparison and benchmarks on Android 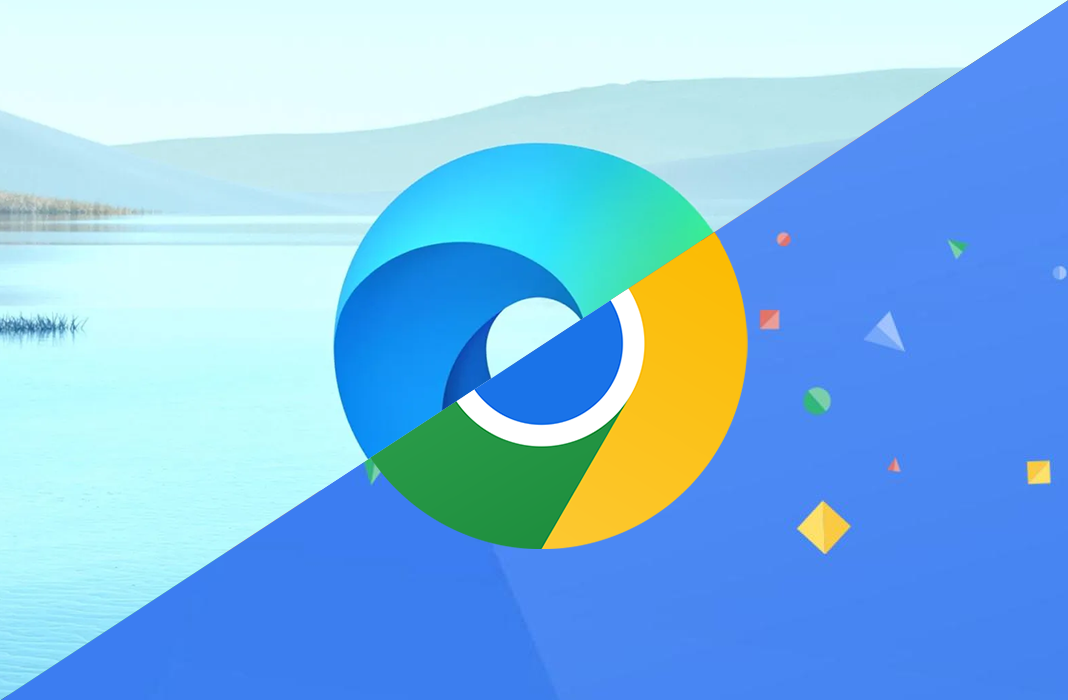 We spend an average of seven hours a day on the internet, so choosing the best possible browser should definitely be a priority for every user. Chrome is the most used browser on Android, which is not surprising considering Google pre-installs it on all devices with its operating system. Microsoft Edge is the Redmond company’s chance to convince users that there are, in fact, great alternatives to Google’s browser, as they’ve already demonstrated with their desktop client. 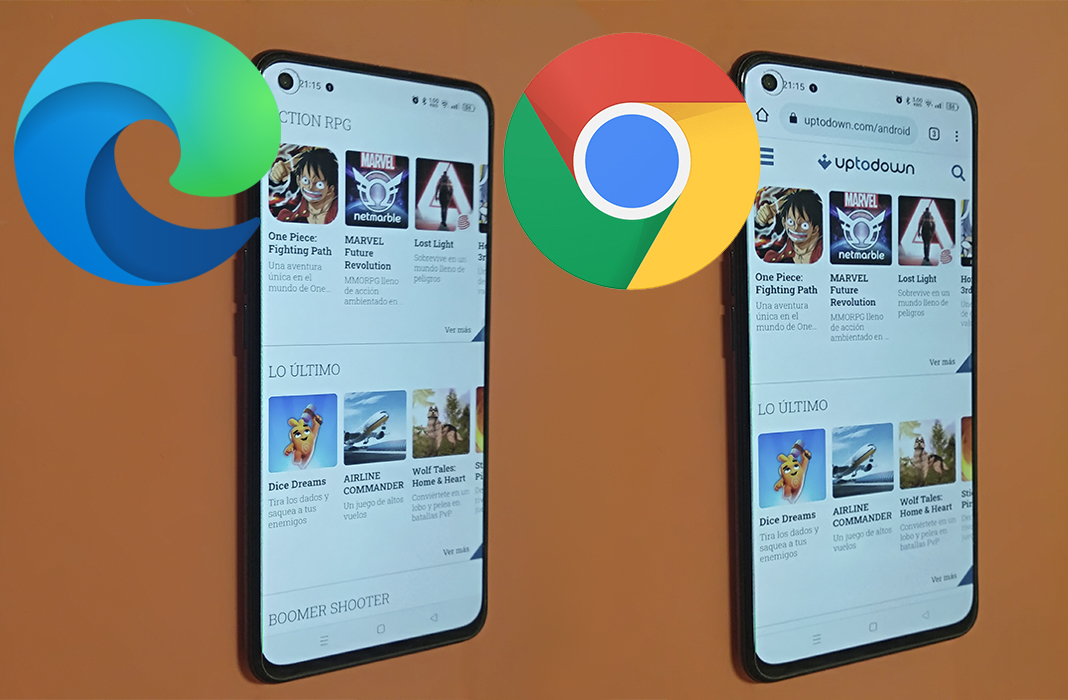 Both browsers are different in terms of design, but they both have very similar configuration options and features. What really matters in these types of apps is their performance, though, right? Well, let’s take a look at how they measure up according to a variety of different aspects.

This point is completely subjective since what for some may be an advantage, for others, may be a pointless tool or function. That said, Chrome’s design is one of its main attractions, not only because of its simple and intuitive interface but also because it’s identical to the desktop version.

Microsoft’s browser also offers a minimalist design in addition to making browsing easier with its Edge Collections tool. This allows you to group web pages about a certain topic you’re researching, which can be used to plan a trip or make a purchase, and give them whatever name you want.

Continuing with the productivity-focused options, Edge also offers the “Read aloud” feature that, once activated, reads the entire web page you have open at that moment.

There’s another aspect in which the two browsers tie: both allow you to convert web pages into apps and create shortcuts for them on your phone.

As for casting options (i.e., sending content from the phone to the TV), Edge uses the Miracast and DNLA protocols and Chrome uses Chromecast devices connected to the same wireless network as the phone.

One area in which Chrome has a leg up is its connection to the entire Google ecosystem, including apps like Gmail, Google Calendar, Google Docs and Google Maps. If you depend on that ecosystem, it can be hard to switch to any other browser.

You’ll find Chrome present on virtually every existing operating system. In the case of Chromebooks and Android, the browser is always installed by default, but you can also use it on iOS, iPadOS, Windows, Linux and macOS. Your accounts and all their content will be synchronized (if you want) on all devices where you log in.

On the other hand, Edge is available on Windows by default and can be installed and run on macOS, iOS, iPadOS and Android. At the moment, the only thing it lacks is Linux support and while you can’t install the desktop version on Chrome OS, you can install the Android version. If you associate it with your Microsoft account, you’ll be able to keep the session open between the Android and Windows version, as well as send content to read it later on another device.

The winner in this section is Edge, without a doubt, not only because it has more privacy settings options than Chrome, such as the tracker blocker, but also because they’re easier to activate.

Edge lets you choose up to three levels of tracking prevention and uses Microsoft Defender Smartscreen against malicious websites and downloads. Chrome only blocks third-party cookies and informs you of potentially dangerous websites, downloads and extensions.

It’s important to take into consideration how much space an app occupies, especially on more basic devices with limited ROM. To measure the space occupied by both browsers, we’ve taken into account the size of the APK before installation and the size of the app once it was installed.

In this case, Edge doubled in size once installed while Chrome increased in size by only about 40 MB. This may have something to do with the integration of the browser with the operating system.

Although Google made improvements to Chrome by speeding up startup on Android to reduce memory consumption, it’s still a browser that uses a lot, and we mean a LOT, of the device’s RAM. In this case, Edge has a significant advantage by using fewer resources.

To measure the RAM used by each of the browsers, we’ve used a useful app called Simple System Monitor. This app runs in the background and allows you to open a pop-up window while testing the browsers. We opened the Uptodown home page, a Wikipedia home page and a YouTube page without logging in.

Edge used 334 MB of RAM with three pages loaded, while Chrome used 547 MB. This is a huge difference, especially if you’re using it on systems with limited memory.

We’ve pitted the two browsers against each other in three synthetic tests to see how each performs and how they compare. The tests we’ve carried out measure the performance of different protocols and rendering systems of technologies such as HTML5.

We’ve performed the test with the latest stable versions of both browsers and all tests have been repeated twice to check for possible variations and without any other tab open other than the benchmark itself.

Let’s take a look at the results:

This testbed developed by the WebKit team focuses on browser graphics performance. To perform the measurement, MotionMark draws multiple objects such as an SVG node or HTML elements with CSS styles.

In this test, the winner was Edge, with 104.09 points compared to Chrome’s 95.88. Thus, Microsoft’s browser proves to be better at rendering web pages.

JetStream2 is one of the most comprehensive browser benchmarks that gives you insight into data such as latency and performance. Each of the 64 subtests it runs measures with individual scores how fast the software starts or the speed at which it executes code.

JetStream offers an overall score (the higher the score, the better the performance) with the average result of the tests, as well as the score of each test separately. In this case, Chrome took the lead with 48.705 points compared to Edge’s 19.499.

Lastly, we ran both browsers against each other in this test that measures responsiveness to any action executed by a user. The test launches a total of 480 tasks to measure the time the browser takes to execute each one of them.

In this case, Edge came out ahead of Chrome again. Microsoft’s browser scored 40.9 points compared to 13.2 for its rival, and since a higher score means better performance, Edge is the winner again.

After going through the benchmarks for both browsers, Edge came out on top in two of the three categories. However, it’s not only all about speed but also about performance. In this case, Chrome, despite using more RAM, has been proclaimed the winner.

After comparing both browsers in identical conditions, we’ve seen that both excel in different aspects and falter in others. However, there are some aspects, such as design, that are subjective. Even the storage they occupy may matter more or less, depending on the device used to run them.

That said, while everything must be taken into account when choosing the right browser, both are excellent tools for most users.