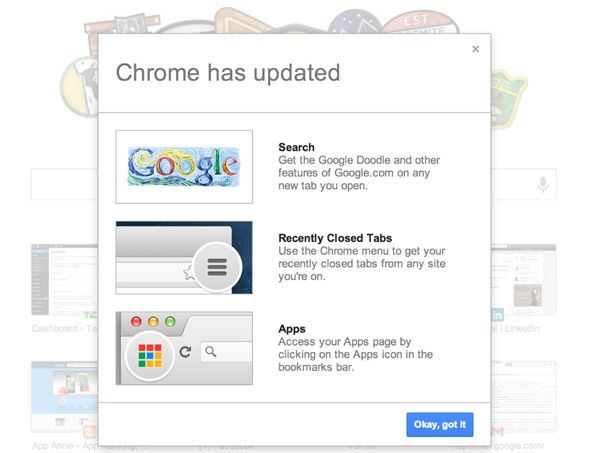 Over the last several weeks, Google has been progressively unveiling to users the new Chrome update that modifies the browser’s opening tab when you start a session with your Google account. It’s characterized by a new array of your most visited tabs, a higher level of integration with Chrome Apps, and the relocation of some of its tools.

Having already announced the release this past August, Google has now united its browser (and its doodle, which is now visible on all open tabs) with buttons to access your eight most visited websites. In the upper part of the screen the information is condensed into the following options: Google Plus, Gmail, Google Images, a drop-down menu with the Chrome Apps that you have installed, an update notifier, and your social login.

Chrome Apps now play a bigger role: in addition to the former link in the main screen, a new icon will automatically be added on the browser’s upper toolbar, as well as a shortcut on the start menu in case you use Windows. Google is undoubtedly making a heavy bet in favor of the integration of its own online tools to replace traditional desktop ones. It’s not a coincidence that just a few short weeks ago they launched Chrome Apps for Desktop.

Other smaller changes include the disappearance from the main menu of the recently closed tabs, which is now “hidden” inside “Recent tabs” section within the Chrome drop-down menu in the upper right part of the browser. In order to receive all these improvements you don’t have to download a new update nor do any kind of special procedure. Once your Chrome has been updated, you’ll receive a welcome message like the one above when you open your browser. In recent weeks a large number of users have already received the update. If you haven’t been one of them, don’t feel too left out; yours is set to show up soon.