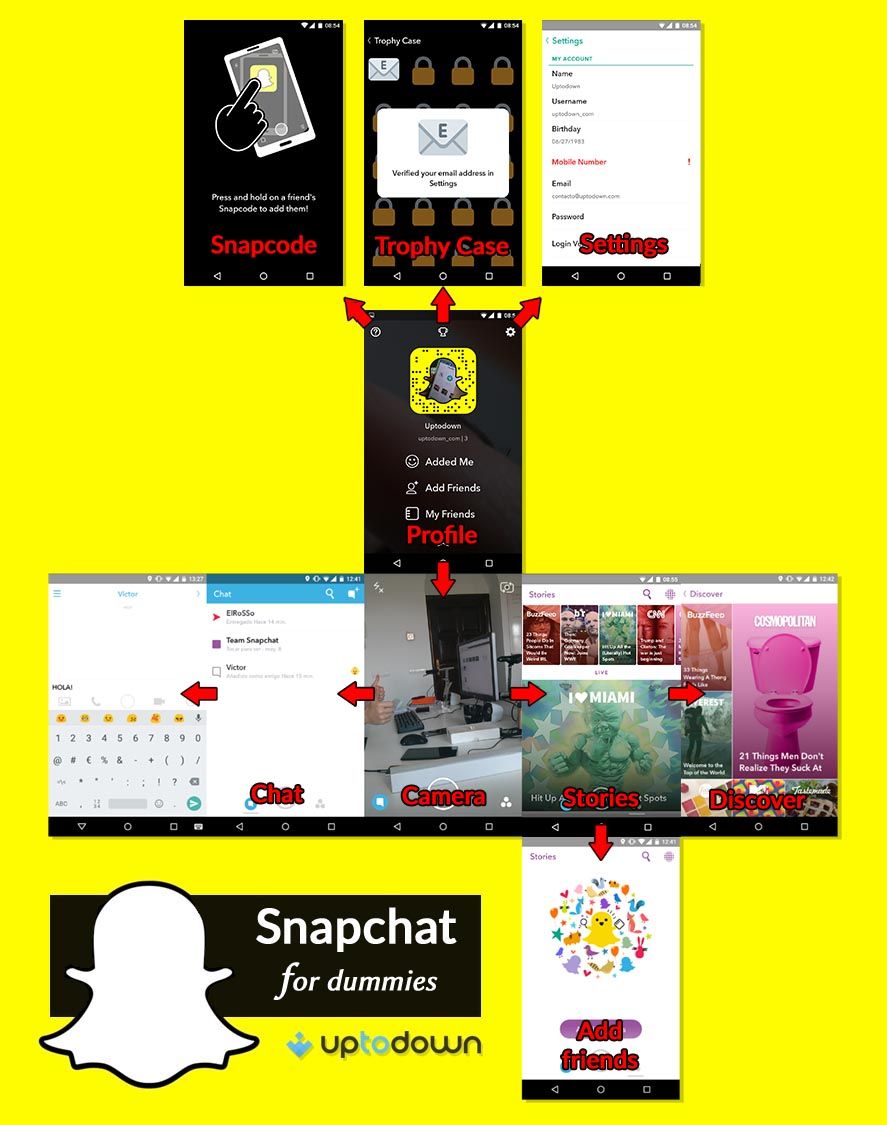 Your Grandma didn’t appreciate Heavy Metal. Your Dad doesn’t really get memes, and you just don’t understand Snapchat. The same sociocultural cycle of generation gaps and cultural divides is what’s coming into play here, but with over 150 million daily users they’ve managed to knock Twitter right off of its high horse. This impossible hybrid: half social networking, half messaging app, is used by thousands of millennials to keep in touch and up to date on the latests snaps by celebrities and brands. No one said this’d be easy, we might even shed a few tears along the way, but we’re here today to decipher its mysterious charms, and we’re going to give it all we’ve got in our explanation of how Snapchat works all of you 30-somethings.

Nothing is forever, not even your messages

Us full-fledged adults are more into hoarding and cataloguing our online existence. Think about it, up ’til now, you probably still have some of your MSN Messenger texts saved onto docs somewhere. And wasn’t it just yesterday that you were secretly stalking somebody’s Facebook profile lurking posts from years long gone? Snapchat is shocking in that it doesn’t save anything. Minds blown.

Snapchat doesn’t have walls, there’s no activity logs. Here, it all comes down to one simple premise: send content, consume it, and watch as it disappears forever. Actually, that’s its major appeal. At a certain age life is off the hook. Living every moment to the max, YOLO, and all that jazz pairs extremely well with a tool that allows for forgetting all about those heated conversations you had with your ex at 4AM. A sense of exclusivity is what makes you feel unique and special when receiving a snap. In fact, before hitting send you’ll get to choose if you want to aim your message directly at a specific person, or if you want it to go public so all of your followers can watch. It’s kind of like throwing a coin into a lake, in that you won’t really know who’s going to be watching, but who cares? For celebrities and huge brands like McDonald’s this kind of interaction sets up a tighter bond between fans/consumers that’s really hard to understand for those of us who are more likely to be out buying six packs of baby food rather than IPAs.

How to browse Snapchat

Creating an account is as simple as typing in your email and username. Although, further along in the process you’ll have the option to add your phone number in order to sync contacts that are also on Snapchat. After logging in, there’s a kind of profile page where you’ll be able to add an image or short video similar to an avatar. That’s it. There are no further customization features, but it’s not like they’re really necessary anyway.

Access settings on the main menu with just a quick tap on the cog icon. Also from your main menu you’ll get to take a glance your trophy case, or have a look at your snapcode (we’ll explain further along, but this is one of the many ways for you to add new contacts), your friend list, and the menu that lets you add new contacts where theres a log of the latest users that added you. Still following? Ok, so up till there things are fairly straightforward. Swiping down will get you to your camera where if you swipe in any other directions again you’ll find all the other sections in this app as is shown in the diagram below. Let’s take a breather here, folks. Not all the sexy middle-agers out there will be able to keep up the pace.

How to add contacts on Snapchat

There are several ways to go about adding contacts. Don’t forget that user relationships are not two-way like on Facebook, but rather follow along in the footsteps of Twitter. Meaning that your followers see all of your public content, but if you’re not following them, you won’t see theirs and vice versa. In terms of ways to add contacts, there are a bunch, and you can access them both from the add contacts option on your main page as well as from the My Story section by down swiping if it’s the first time that you’re opening it. In short, How to send photos and videos

It’s not in vain that Snapchat has an in-app camera at its core. From here, you’ll be able to access the rest of its features, although how it works is just as vaguely explained as the rest of it. If you tap the circle below, you’ll take a picture, but if you hold it down, you’ll be recording video for up to 10s. But that’s not all, if you hold your finger on your face, or anyone else’s that’s in the image, you’ll get to add a bunch of effects that are superimposed in real time. This will ring a bell to those of you out there that are familiar with MSQRD. Not to mention the hundreds of stickers and post-processing filters that you can add later on.

Once you’ve got something to post, you choose who to send it to, either one person or a group of specific contacts, or put it up on your story (we’ll get to that in a sec). First of all, you’ll need to keep in mind that the image content disappears just a few seconds after watching it, but if you’re quick enough to grab a screen capture, the other person will know. So, watch out for what you send and who you’re sending it to, if you catch my drift. When it comes to “stories” content is somewhat less fleeting, it can be seen by users during the first 24h after publishing. That’s about as close as you’ll come to finding something more or less like a wall, where you’ll link several snaps to turn them into a kind of slideshow about anything you want. This method relays slightly more headroom for branding and marketers to broadcast promotional snaps, and allows major execs to slap on a knit cap like Mr.Burns and kick it with the youngsters.

One of Snapchat’s latest moves was to add partners. Basically they’re major companies that have their own specially licensed channels. There they upload all kinds of HD videos with hours of post-production work to engage consumers via distribution channels just like every other communication line out there.

Promotion is what’s really at the heart of it all. In recent years, there’s been an avalanche of brands like McDonalds that run ads and promotional exclusives that aren’t published anywhere else and teasers from HBO, for example. Netflix, NIKE, Disney, Apple, Coca-Cola, and even the White House are some of the major brands that are now active on this cheap and profitable platform. Here’s a couple of lists of Snapchat’s high profile celebrities and brands.

Now it’s your turn, adult. Decide for yourself if this cockeyed net of madness adds anything to your dull, grey life. No harm in trying, right?