Home About Us Google’s treacherous competition with other app stores 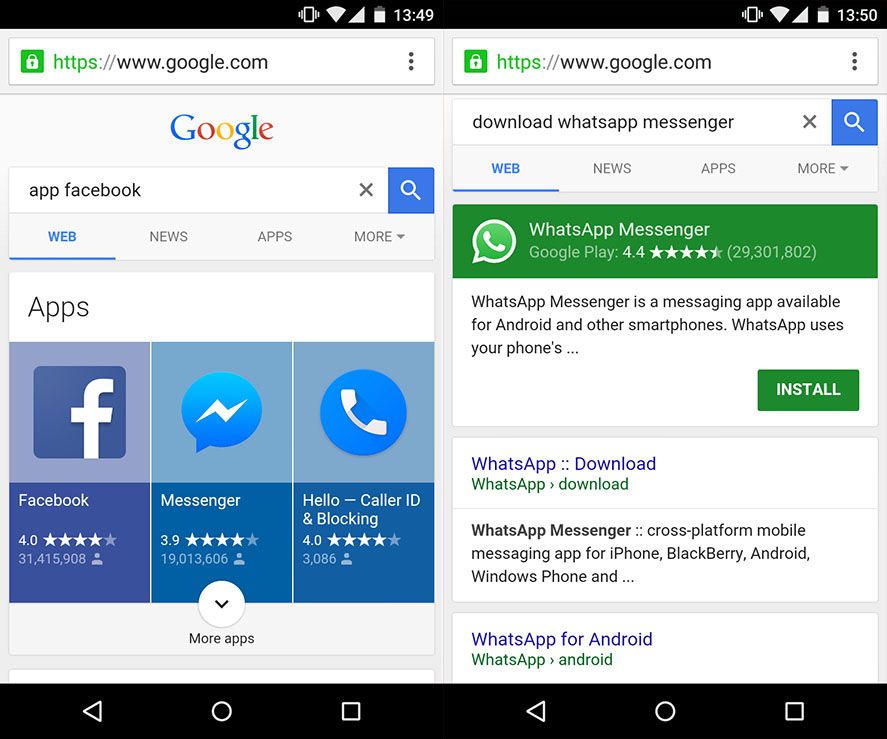 In Uptodown we’ve weathered all sorts of knocks from the heavyweights, be they complaints from Twitter asking us to remove all previous versions of their mobile client (one of the advantages of our service) or Google’s veto of our official app that forced us to remove it from Google Play and offer a much more limited version than the original. Now Google strikes again with Chrome search results for apps that are completely unfair to the competition, giving an overwhelming preference to downloads from Google’s own store.

Until now, when you searched for mobile applications on Google you’d get a few sponsored links at the top follow by the organic results for the search term. In many cases, Uptodown was the main result, even above the official sources, which some people might deem cheeky but which had an obvious explanation: if we offer a reliable service with a better download speed that the official pages, and with even more information than that provided by the developer, it just makes sense that many users would prefer to use our infrastructure. The sad thing is that Google is trying to hide any source that doesn’t correspond to the ones in the Play Store in order to give greater weight to its own results in all sorts of ways.

Here are a few examples: If you Google ‘Download WhatsApp’ you’ll get a bright and flashy download box for WhatsApp that redirects to its Google Play page. Beneath it, the Uptodown link, much less attractive but that until just a few days ago was the first visible result. Now try typing ‘apps’ followed by any term. You’ll see you get another, even more prejudicial search layer than the previous one, with enormous icons similar to those used in the Play Store and leaving practically any other results outside the initial scroll. In fact, we’ve even found searches where the Uptodown result appears after the sponsored link, the new app boxes that take you to Google Play, the related images, AND the app’s ITUNES link (searching from Android!). What the heck is happening here?

And now we’re not just talking about Uptodown in particular but about all this ridiculous rubbish added to the browser. Just searching the simple, ubiquitous term ‘apps’ will give you a results page WITHOUT A SINGLE ORGANIC RESULT in the entire first page, between the sponsored links and those self-promoting boxes. Look:

And here is another questionable decision: amongst the different search types Google offers (news, images, videos, etc.) there’s one for ‘Applications’. So far all fine, except that the only results there are from Google Play. But what happens when you search that section for an app that’s not on Google Play? Check it out: TubeMate is one of the most downloaded apps on Uptodown, and we are the official source chosen by the developers themselves. If you do a normal search we appear in the first slot, but if you search the Applications section… you get an app called TubeMOTE followed by other Google Play links that have almost nothing to do with what you were searching for! As our CEO Luis Hernández already commented on his blog, currently more than 60 million users trust Uptodown for their software downloads, even when we occasionally have to use all sorts of labyrinthine methods to get to the final user and don’t have the luxury of facing our main rivals, Google and Amazon, on equal terms in all spheres. In fact, Amazon is now clutching at straws after launching its own independent tool for free apps, although breaking apart its marketplace doesn’t seem too smart (or maybe it is, given what we’ve seen). While we’ve already had to deal with the hassle of the ‘unknown source’, now it will be difficult for any user to come across any app store that’s not Google’s own market. No matter what, though, we’ll keep fighting as always for a transparent and egalitarian Internet. Strength and honor!