Home Tutorials and Guides How to create broadcast lists in WhatsApp

You probably use WhatsApp on your smartphone to communicate with everyone: family, colleagues, even strangers. You can send messages to your contacts and sometimes, you want to say the same thing to everyone without having to repeat the same message over and over again. That’s where broadcast lists in WhatsApp come in handy. Announcing a baby’s birth or inviting everyone you know to your birthday party just got a whole lot easier.

WhatsApp recently took measures to fight against the massive forwarding of messages, a problem that’s especially serious in countries like India, where it’s creating a plague of misinformation and excessive messages on a daily basis. Broadcast lists are a nice way to fight against these practices, letting you send a message individually to a group of contacts, without it being intrusive. In other words, it’s not for sending spam to enormous groups.

What are WhatsApp broadcast lists?

The creation of broadcast lists in WhatsApp is a feature that lets you send mass messages to your contacts. This way, you don’t have to copy and paste the message in each chat or create a group. Plus, all the conversations are individual and no one else will know how many people you sent the message to or who else received it. None of the people on the receiving end will know who else you sent the message to, and they won’t even know that they’re part of a broadcast list.

You can use broadcast lists for personal use; to send photos of your kids to your parents and in-laws, for example. But you can’t use them to send spam, and you can’t abuse them or WhatsApp will take notice and you won’t be able to use it anymore; they’ll block your account and your app.

From the app’s website FAQ: “Frequent use of broadcast messages may lead people to report your messages. We block accounts that are reported multiple times.”

How to create and use broadcast lists

You can create a broadcast list in WhatsApp in just minutes, with a maximum of 256 contacts. You can add as many as you want or need. Just be aware that you’ll open an individual chat for each one of the replies you get to the message you sent to your broadcast list. If you’re not careful, you can have 200 conversations open and your app will be utter chaos.

To create a broadcast list see the following steps: 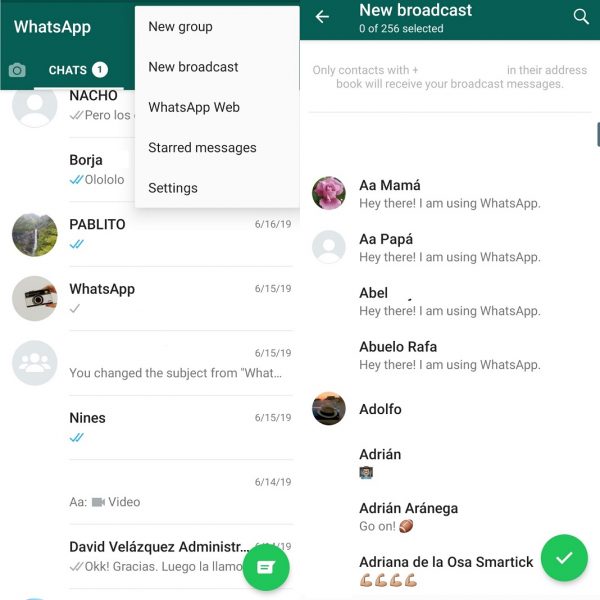 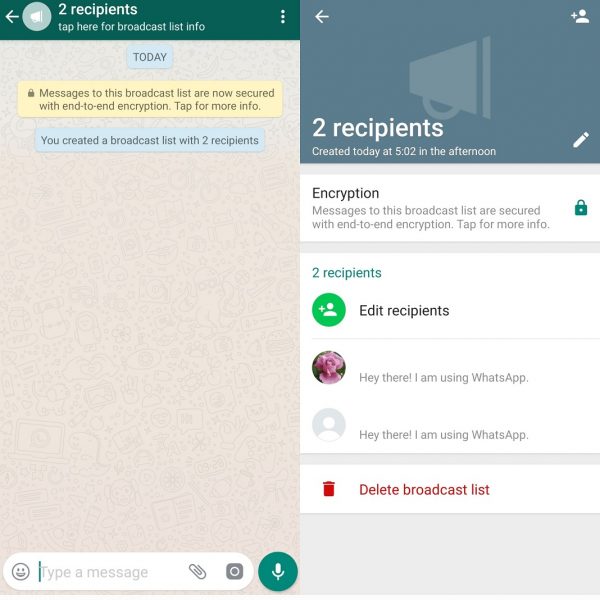 How to edit broadcast lists

If you want to add someone else to the broadcast list or delete someone once it’s created, you can do so. You just have to enter in the list, tap the three dots in the upper right corner, and go to “Broadcast list info.”

Just like any group in WhatsApp, you can add any contact by tapping on the “+” sign. If you want to delete a contact, you just have to hold down your finger on the name and tap delete. The person will disappear immediately and won’t receive any future messages. 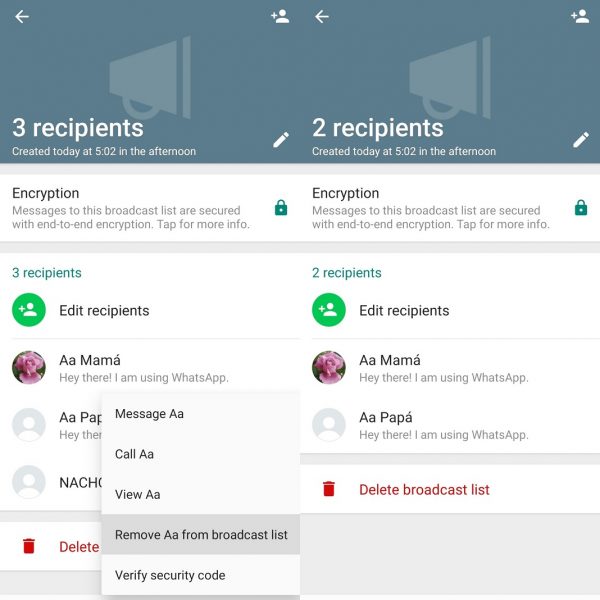 If you don’t need a list anymore, you can delete it. To do this, you just have to hold down on the broadcast list from the main screen in WhatsApp and tap the trash icon. Confirm you want to delete the list and it will disappear.