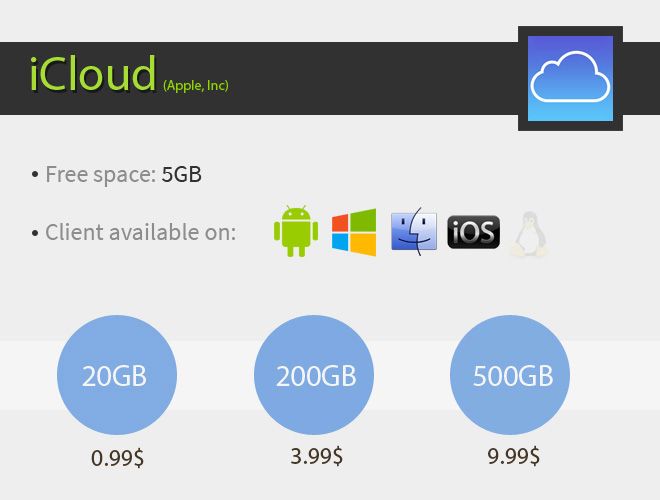 Free hosting services that allow you to sync your files in remote storage spaces are increasingly indispensable as people use ever more distinct devices each day. While everyone offers a certain amount of free space, it might be a good idea to subscribe to one of the paid plans to increase it. Here we compare the features and prices for five such services: DropBox, Google Drive, OneDrive, MEGA, and iCloud.

[Update: Although the original article was written in March 2014, all the information below has now been updated to September 2014.]

The free version of DropBox offers 2GB of space, and although there is a paid plan with accessible prices, you can increase this amount of default space using several different methods. Thus you can get up to 16GB more by recommending the service to your friends and having them register, with 500MB extra awarded for each friend. In addition, if you associate your account with the Mailbox email manager, you’ll get an extra 1GB. One of the main advantages of Google’s service is that it gives you 15GB for free to share between your Gmail inbox and your Drive. Even still, recently the cost of the expansion packages has been reduced drastically, and for just two bucks a month you can get 100GB of remote storage. From there, 1TB costs 10 dollars, and there are options for storage plans with the same base rate for 10, 20, and 30TB. Apple’s cloud storage service, although designed to be used with the company’s devices, is perfectly extensible to any other desktop machine, with a client available for Windows as well as extensions for several browsers. On September 10, 2014, Apple drastically reduced the monthly fees. Besides those shown in the graphic below, there is also a 1TB plan for $200. After its recent change of name from SkyDrive, Microsoft’s cloud storage service has completely revamped the look of its service, integrating it further into the Windows operating system in the process. In fact, the latest update to Windows 8.1 leaves it running in the background to sync your preferences. In June 2014 it increased its allowance from 7 to 15GB, and also modified its price plan and expanded the maximum file size to 10GB. The successor to Megaupload has broadened its sights beyond simply serving as a remote-storage service, having now launched a multiplatform file-synching app that together with the 50BG that Kim Dotcom offers just for signing up make MEGA an excellent option. In addition, it lets you save up to 17% on the rate if you pay for an annual subscription.