One video game genre that adapts perfectly to smartphones and tablets is Tower Defense. This subgenre of strategy games works so well on touch screens that it seems like it was made for them. Now that there are many options available in the Android ecosystem, we’ve gone ahead and made a list of the best free tower defense games on Android. 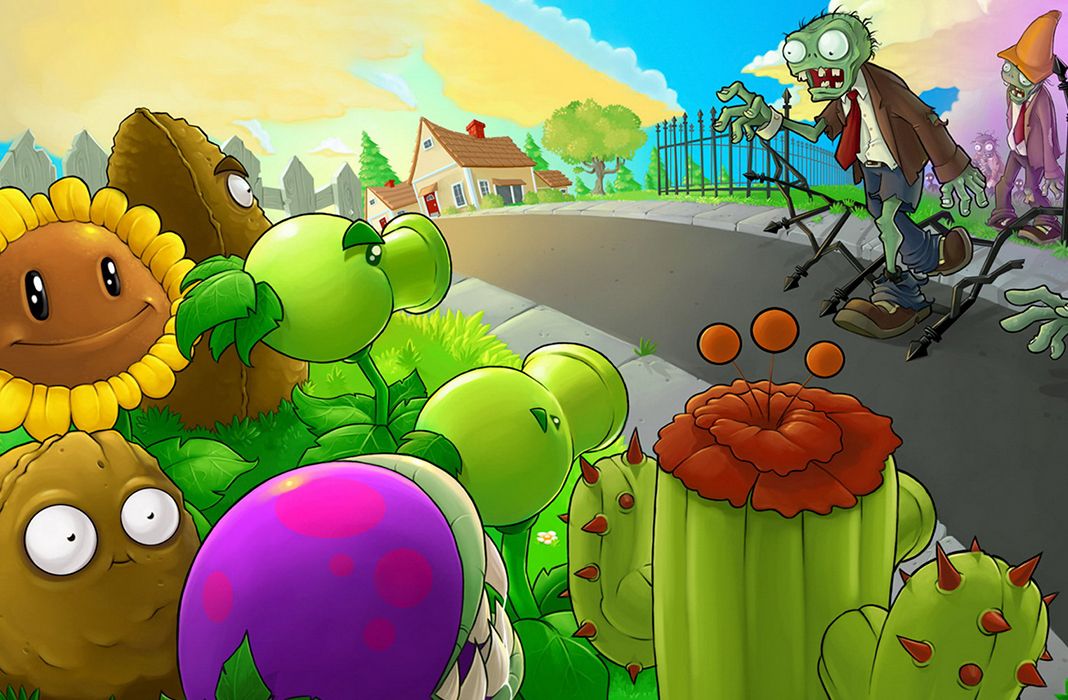 Traditional tower defense games certainly haven’t innovated much in their short history: you have to place turrets to fight back hordes of enemies that are trying to destroy your base. Radiant Defense is one of the few examples of a game that tries to do things differently by changing one thing: you can block terrain to force enemies to follow certain paths that are more easily defended. It’s a great game with very colorful graphics. [Download] 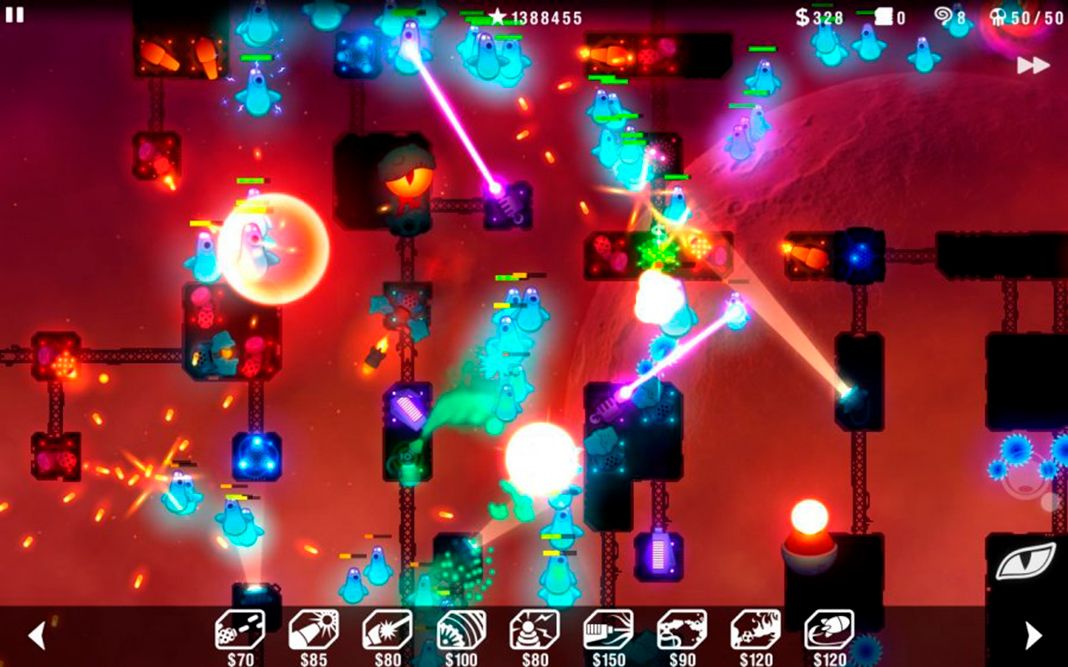 Although most of these kinds of games feature an overhead view, there are a few that go against the flow by using other perspectives. Skull Towers puts you right into the action with a first-person view, tasked with taking down waves of undead that ramble towards you. In addition to your trusty bow, you can construct barricades and other defenses to slow down your enemies. Don’t miss out on this fun and original title. [Download] 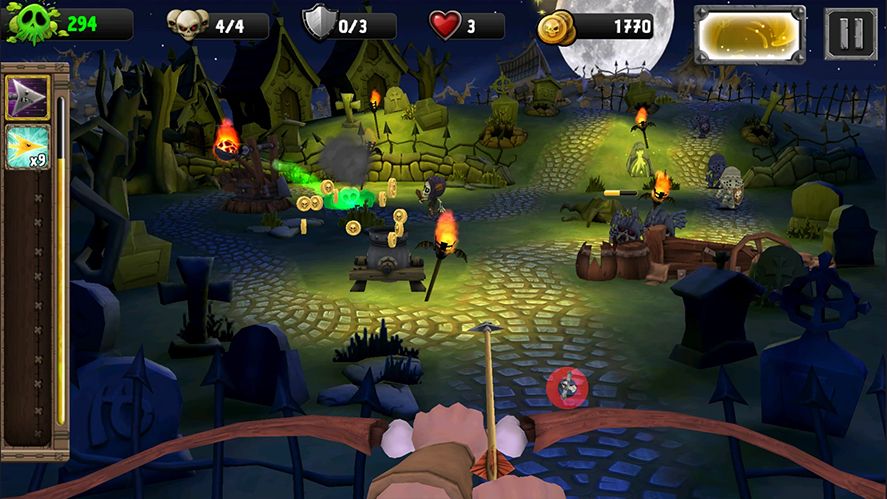 We can’t forget about the classics, and the fantastic title Castle Creeps TD has seen great success thanks to its updates over time. It features towers and heroes that you can level up to customize your game experience. It’s a bit old, but that doesn’t mean it’s any less fun. [Download] 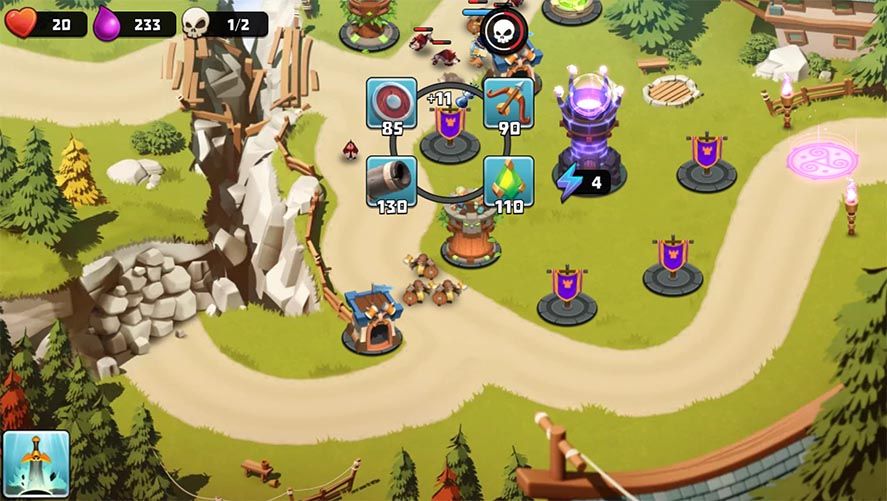 If you’re looking to stick to the term “tower defense”, this game may take it a bit too far. You will play a lone, eagle-eyed archer who has to defend a solitary tower already in place. It’s not clear why he is doing this, nor if he ever climbs down to do his business, but what is clear is his expertise with the bow and arrow. You have to choose the right parabolas to drive your arrows home and dispatch enemy cohorts that seek to conquer your land. Check out its different unlockable characters, which you can get after hours and hours of gameplay. [Download] 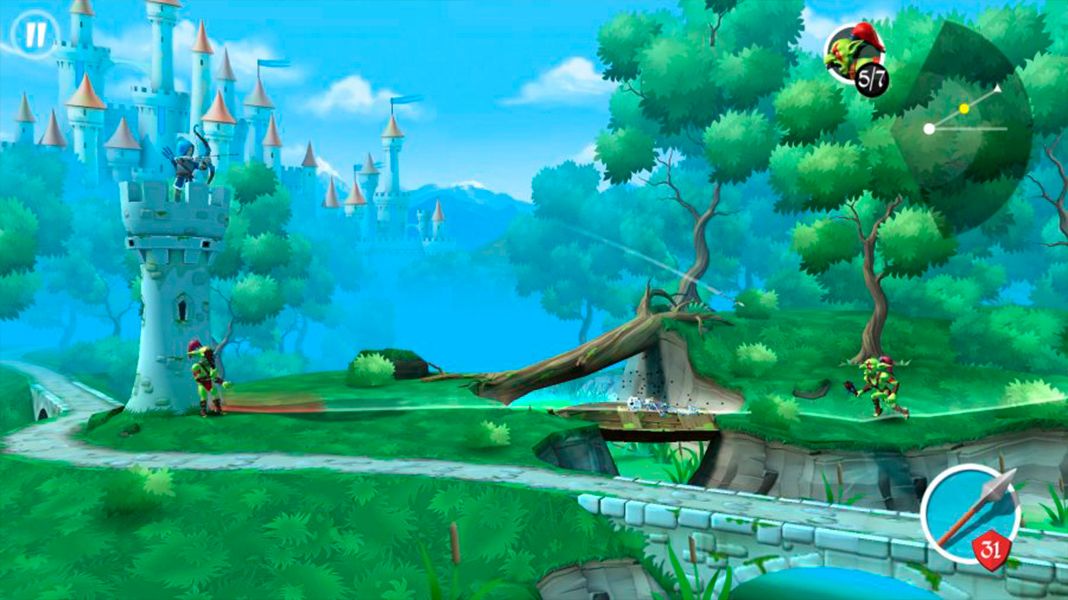 Classics never die, and Castle Defense 2 is a clear example of that. Aside from the ability to build a handful of different turrets, you will also have powers and heroes to help dispatch the orcs and other bad guys that are headed towards your base. It isn’t exactly the most innovative tower defense game, but it does feature colorful graphics and a huge quantity of levels. [Download] 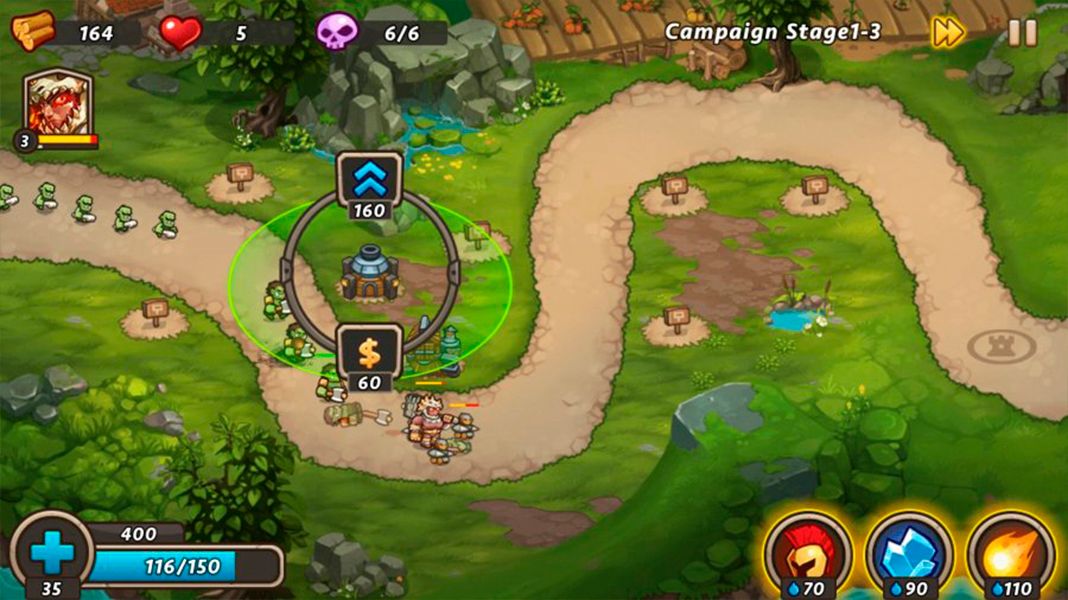 Don’t let its ugly and simple graphics scare you, Grow Castle is pure brilliance and fun. It’s a quick-paced title in which you have to make good decisions about how to spend the money dropped by fallen foes. You can strengthen your tower, which comes with an appropriate graphical change, or improve your troops to make them stronger and more able to fight back the danger that continues to grow. These choices between waves are key to surviving until the end. One of our favorites. [Download] 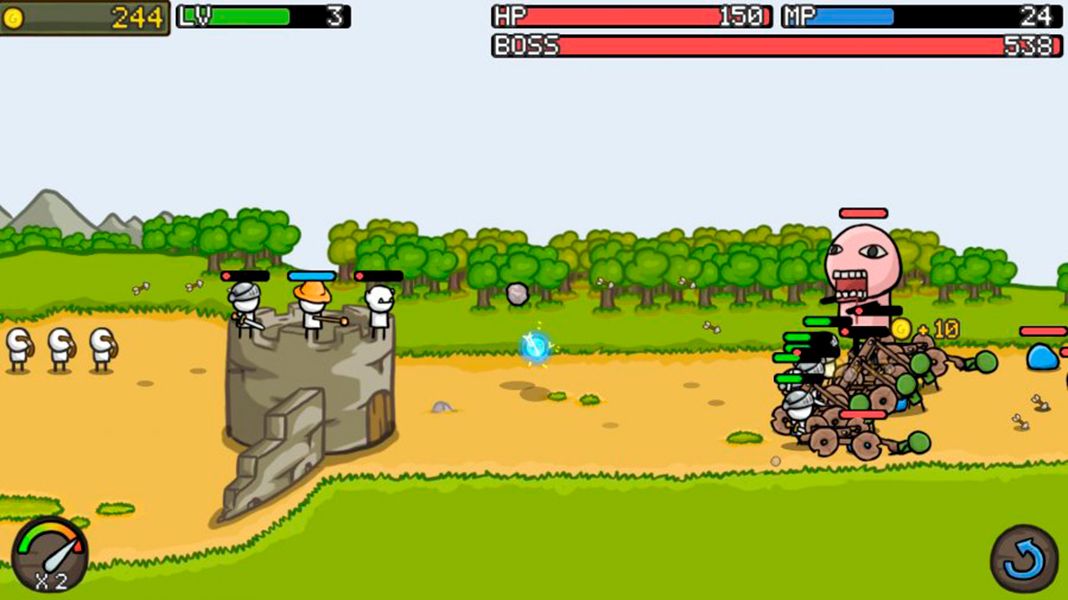 We tried to get away from games that mix genres to keep the list more centered around tower defense, but Digfender combines elements from different genres into an incredibly fun game. Your goal is still to defend your base against hordes of enemies, but this time they come out of the caves that you dig. This adds an extra element of strategy to base building and has the added benefit of providing resources when you excavate certain areas. It’s a very interesting concept that deserves more love and attention. [Download] 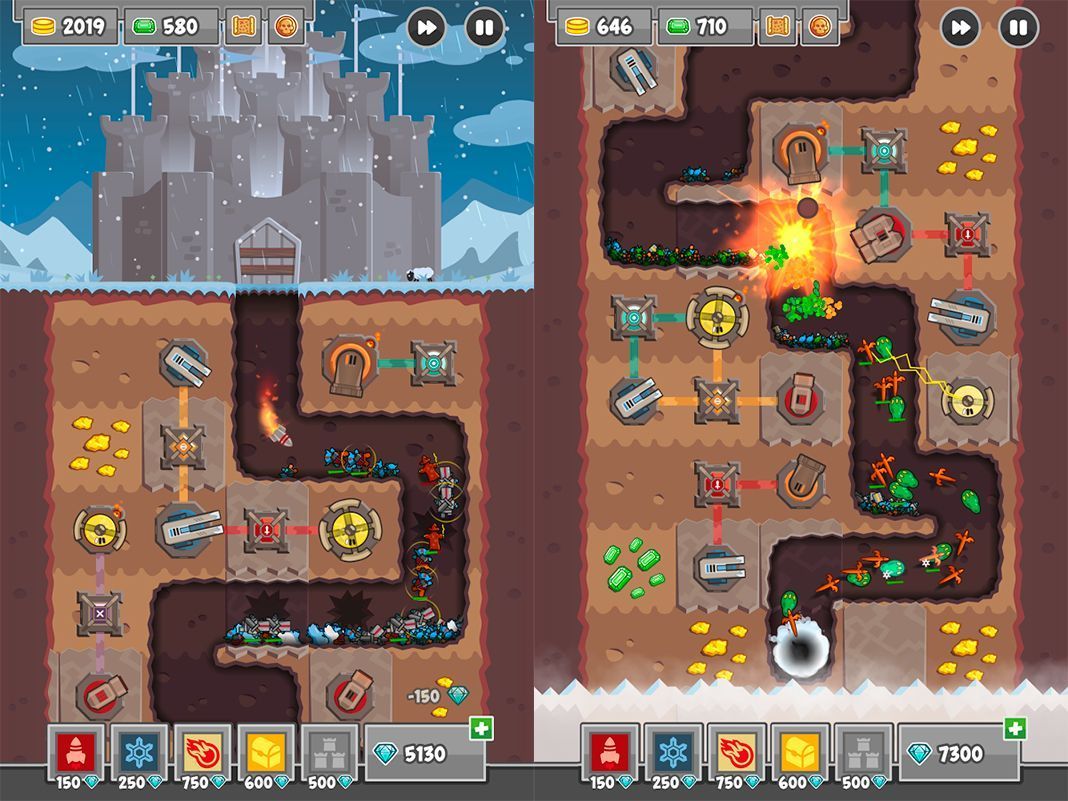 There are many copies of Kingdom Rush, and we’ve already included some of them in the list, but Realm Defense might be the best of them. It’s not an original title, but it does everything well: you have a variety of towers available, the graphics are excellent, and there are a bunch of levels to play. All in all, an outstanding game. [Download] 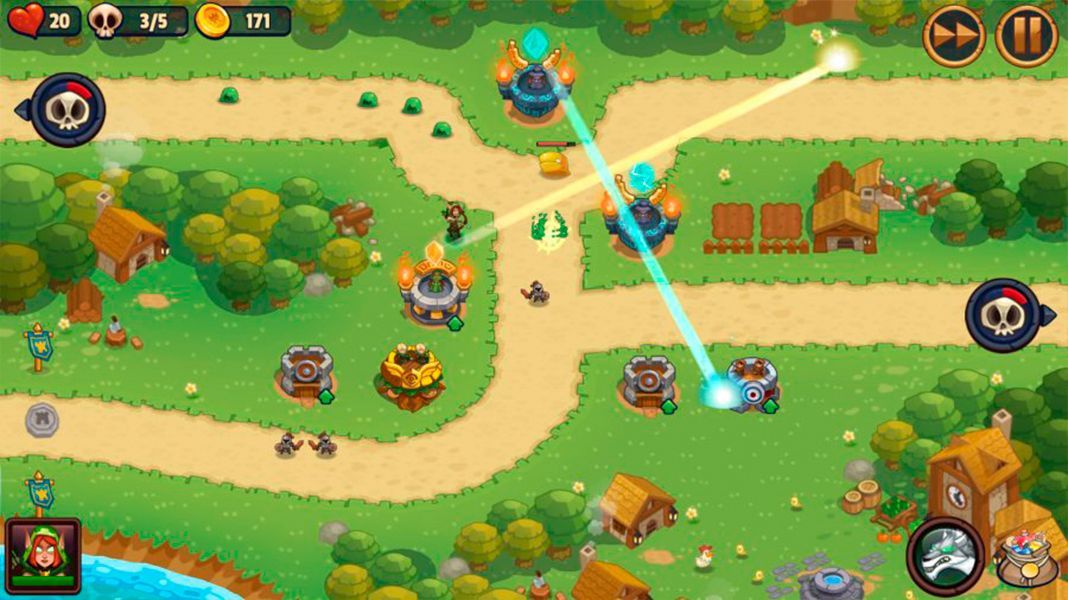 It would be a crime to talk about the tower defense genre without mentioning this stellar saga. The second edition of the popular Plants vs Zombies adds many more hours of gameplay, an assortment of defensive plants, and a continuously growing variety of hilarious zombies. There probably aren’t many of you who haven’t already played this game, or its classic original, but don’t hesitate if you haven’t. Now to get back to humming the song by Laura Shigihara. [Download] 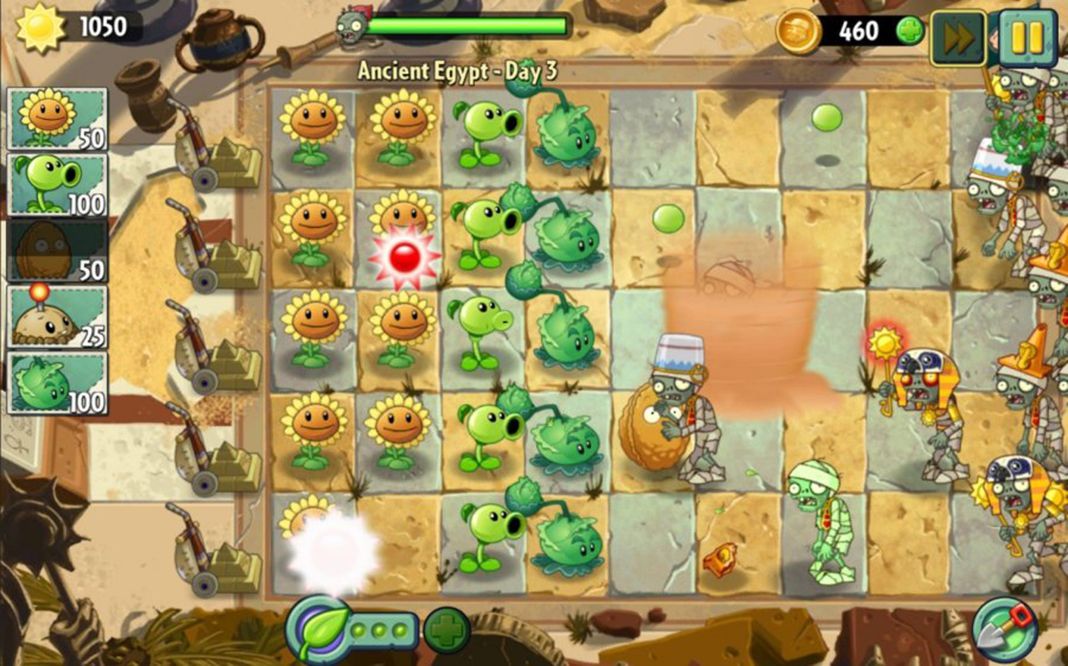 The epic task of defending your fortress alone is something that you have to try, and Warcher Defenders is one of the best games to do so. This fantastic retro game combines the difficulty of games from a bygone era with incredible pixelated graphics and chiptune music tracks. Enemies attack from all directions, so you have to climb up and down the platforms built on the side of your fortress. The gameplay goes at a crazy pace, and there are difficult final bosses at the end of each screen. What more can you ask for in life? [Download] 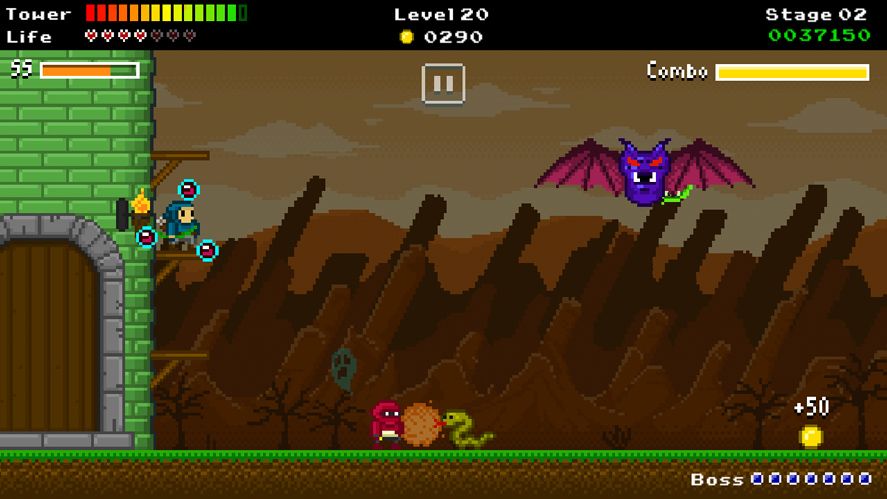 With Turret Defence you’ll feel the excitement of endlessly combining turrets to try to stop the tireless advance of dozens of enemies. The vertical orientation in which each game is played will allow you to see each of your opponent’s advances at all times. By joining turrets of the same type, you’ll be able to upgrade to a higher category and fulminate your enemies before it’s too late. [Download]

Defending a huge fortress has never been an easy task. Centuries ago, warriors already had to cover the path that led to each castle with innumerable traps. This will be your main mission in Royalt Revolt 2. If you don’t want your enemies to get anywhere near your fortress, in each level you’ll have to try to fill every area of the terrain with barricades and obstacles. All this while you plan your best offensives to let your soldiers conquer each rival fortress. [Download] 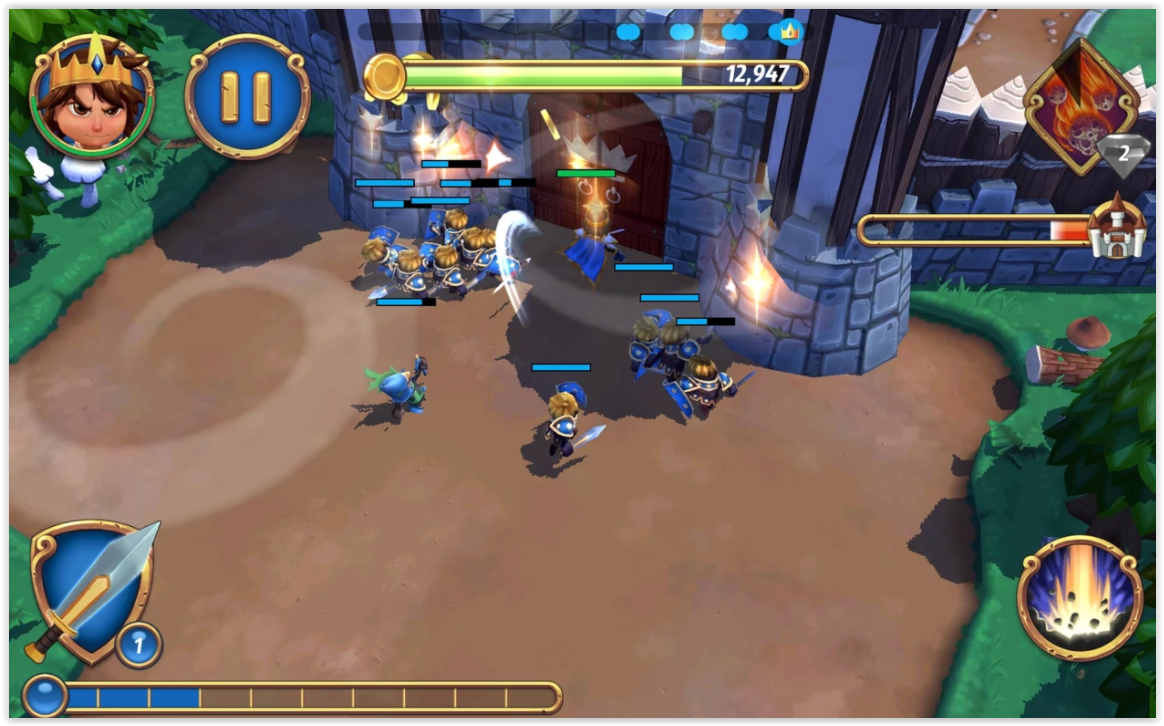 A house in the middle of a swamp is being attacked by countless animals. In Swamp Attack 2 you will once again help this unfriendly character to defend his house from these crocodiles and other hungry creatures. To that end, you’ll have to quickly click on each of the evil creatures that, swimming over turbulent waters, get closer and closer to the main character’s home. [Download] 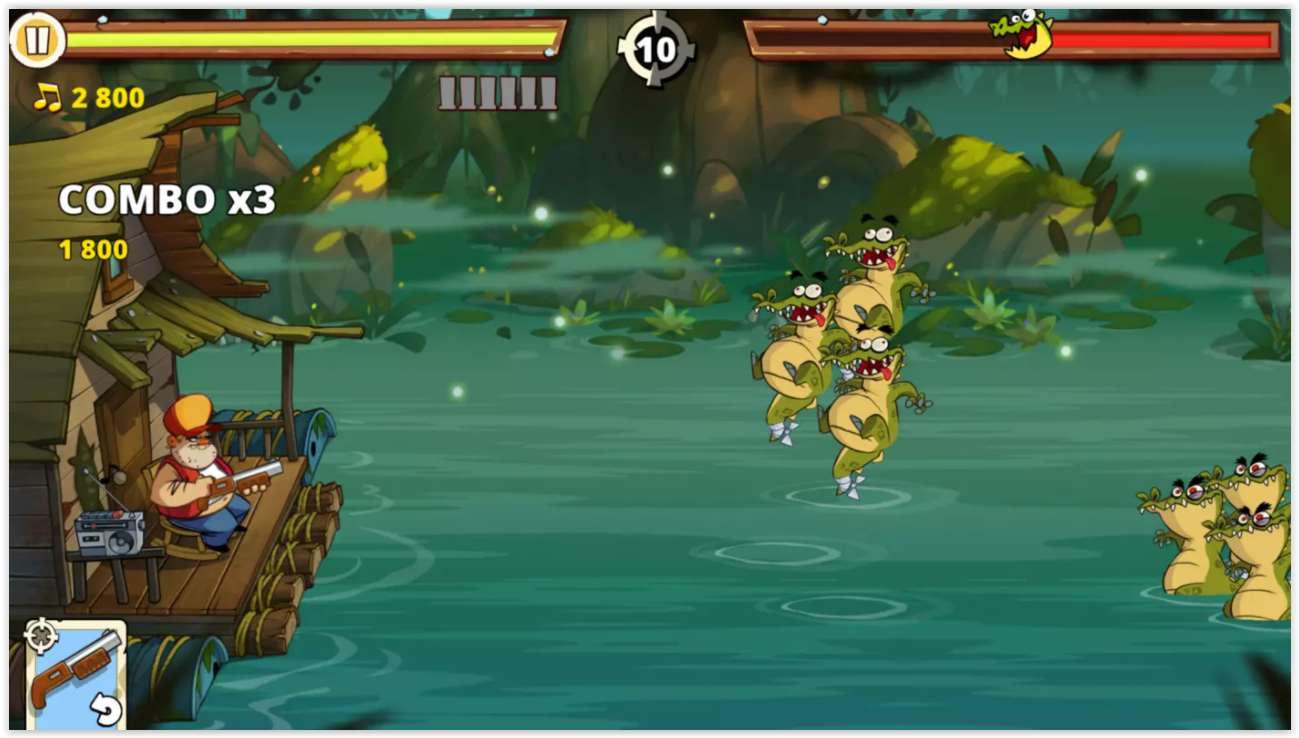 A large group of mushroom-shaped warriors are the main characters in this title that already has two installments. In Mushroom Wars 2 you’ll have to create your own squadron of these small creatures to conquer all the mushrooms scattered over the terrain. In addition, the game lets you adjust the difficulty level in an attractive campaign mode made up of more than 50 levels. [Download]

Empire Warriors TD: Defense Battle has the most traditional elements of the tower defense genre in terms of mechanics. Throughout each game, you’ll have to add turrets that will help you shoot at all the enemies that approach your area. Paths will be infested with them, which means that you’ll have to be very fast and spread the cannons at full speed if you don’t want to be assaulted. All in all, the great variety of resources to discover and the speed at which the enemy hordes move will make each challenge increasingly exciting. [Download] 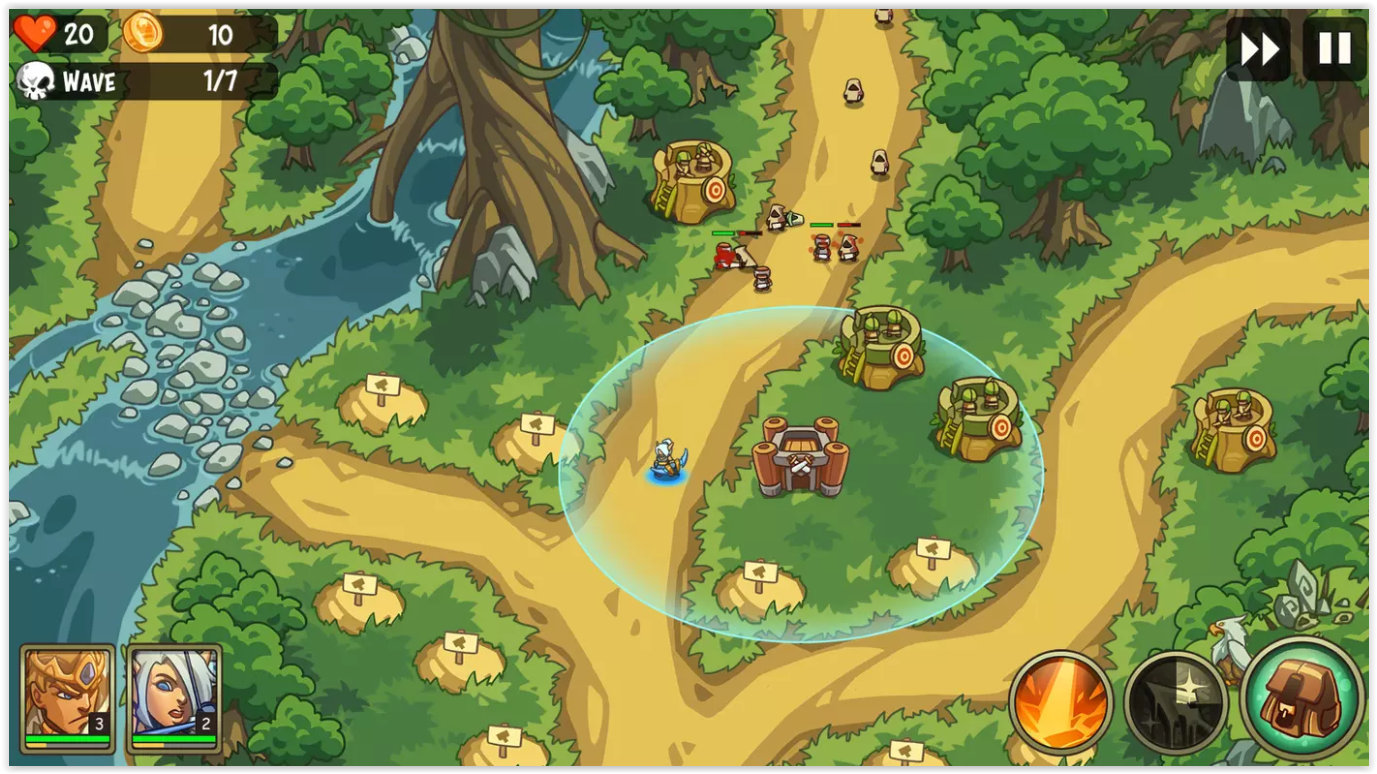 In Toy Army Men Defense shows a macro view of scenarios controlled by toy armies. Your mission in each game will be to align the lead soldiers in the best possible way to mitigate the rival offensives. By planning different strategies, you will be able to attack the rival base while you keep control of your territory. By earning rewards, you will be able to unlock more powerful troops that will help you to develop the best tactics in the arena. [Download]

In AMazing TD you will find square-segmented scenarios on which to build offensive and defensive towers. Creating the most appropriate strategy will be essential if you want to stop the advance of dozens of enemies that will relentlessly approach your base. Although during the first levels the availability of resources will be very limited, you will gradually assemble a solid defensive line that will give you an advantage during each online duel. [Download] 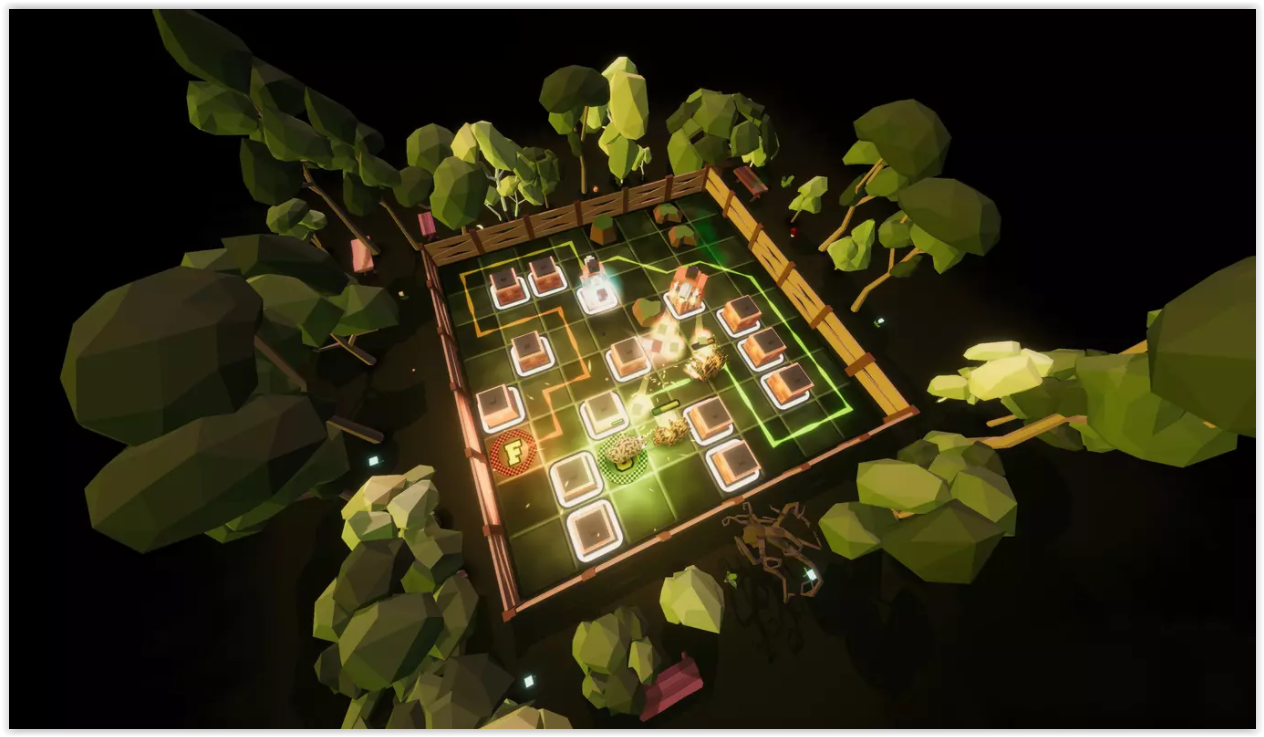 Guardian Chronicle brings you time-limited assaults that will test your ability to allocate characters and turrets in the best possible way. At the bottom of the screen, you will see the different warriors that you can spread across the terrain. Based on the rivals’ position, you’ll be able to manage offensive combinations that will help you stop the enemy’s relentless advance. In addition, each of the characters will have specific skills that you will be empowering as you win. [Download]

New York City is in danger and only an army of larvae can stop evil from spreading. In Larva Heroes you’ll guide the steps of a group of sticky worms that, thanks to their bravery, will attack all the enemies that try to approach your base. As you level up, you’ll get stronger characters that will make sure that the Big Apple doesn’t fall into the hands of the evildoers. [Download] 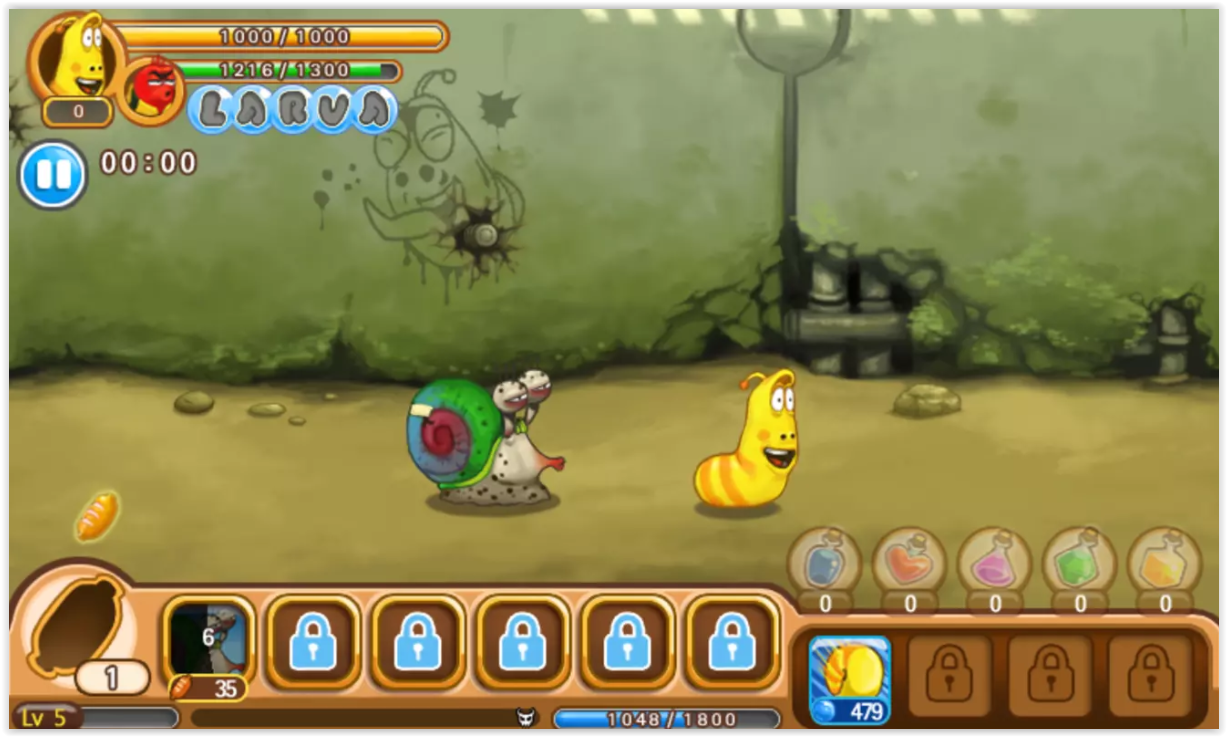