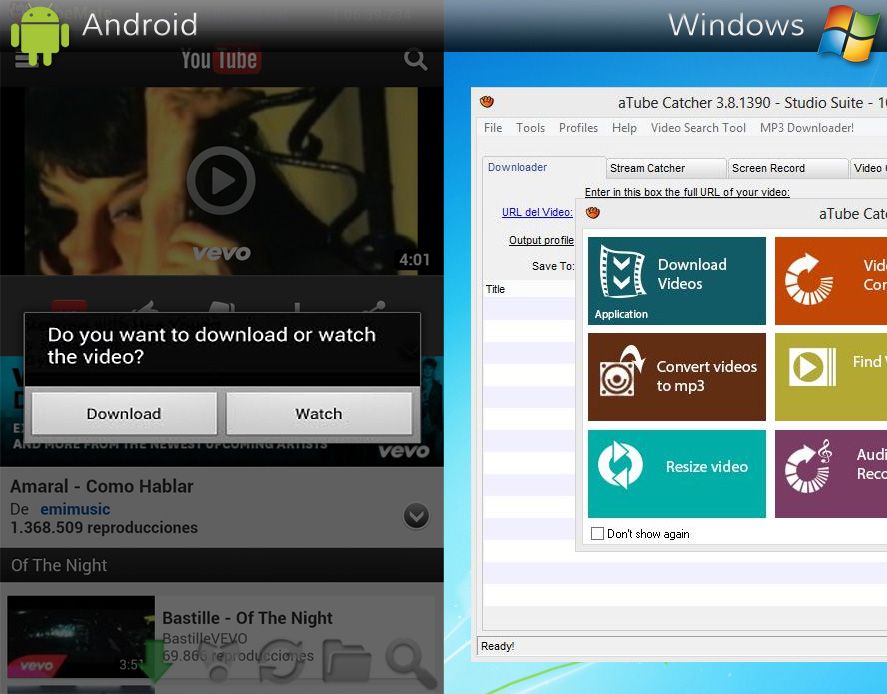 As clearly displayed in the volume of software downloads on Uptodown by platform, and as has been happening for several months already, Android is displacing desktop operating systems when it comes to doing tasks that have always been relegated to desktop computers. These are some of the many tasks that you can do from your smartphone using their counterpart Windows app equivalent.

The connection between the two platforms is clear, as is the demand for this type of service. aTube Catcher for Windows and Tubemate YouTube Downloader for Android are among the most downloaded on their respective platforms. The increase in traffic of multimedia content via IM services has boosted demand for programs to download video directly from your smartphone. The way both programs work is practically the same, as are their results. Getting a WPA key for a nearby WiFi network is a practice that, although in most cases is used for ends that are at minimum shady, is still in enormous demand. Aircrack-NG for Windows is the leading tool in its field for Windows, but the connectivity options of modern smartphones make it very useful to access this tool from your smartphone itself. Wifi Unlocker or ReveLA WiFi are two equally good alternatives for Android. Android isn’t as likely to collect ‘debris’ as Windows, but does get cluttered by files from the cache of certain apps and other temporary content that accumulates on your device even after you’ve uninstalled an app. Luckily, there are efficient cleaning tools such as Clean Master for Android, and—if you’re looking for a company everybody knows—the one and only CCleaner recently released a mobile version with similar functions to those of its desktop cousin. Editing text documents, tables and presentations can get rather annoying on those small smartphone screens, but nothing stops you from using a tablet or even connecting your phone to a larger monitor if you have a micro-HDMI connection. This makes your terminal into a device from which you can work perfectly with an office IT suite. QuickOffice (recently acquired by Google) is a fantastic alternative that is totally compatible with the formats used by Microsoft products and other equilvalent freeware such as LibreOffice. Completely free image editors of the likes of Photoshop or Gimp are few and far between or else not up to scratch, but there are several specialized apps that can do many of the same things on your smartphone. Pho.to Lab is one of the most downloaded apps to apply automatic effects to images and create collages based on all sorts of templates. PicsArt Estudio and Pixlr Express are other tools with similar features, also among the most used in this sphere. When it comes to remote desktops there’s no need to look for alternatives, since the most-used tools are already crossplatform and allow you to control remote machines from other PCs or your smartphone. TeamViewer is one of them, and as of recently Google Chrome Remote Desktop can completely jump this limitation to run on your browser independently of the type of hardware you’re working on. To use your smartphone as an exterior hard drive and above all to work with most of the tools described in this article you’ll need to have a decent file explorer that unfortunately Android does not include by default (unlike desktop operating systems, where they’re a central feature). Luckily there are many alternatives out there like OI File Manager or ASTRO File Manager, from which you can browse through the file tree on your internal memory or SD card. In addition to their use as a remote management tool, apps like Bittorent have their own official client for Android from which you can download files and store them on both your phone and a drive you have connected to it, or remotely. If you need a more complete downloads manager than the one included by default in the browser you use, you can always turn to tools like Easy Downloader. How to control your PC from your Android