Home News and Updates Google Drive 2.0 and a new app for slide presentations 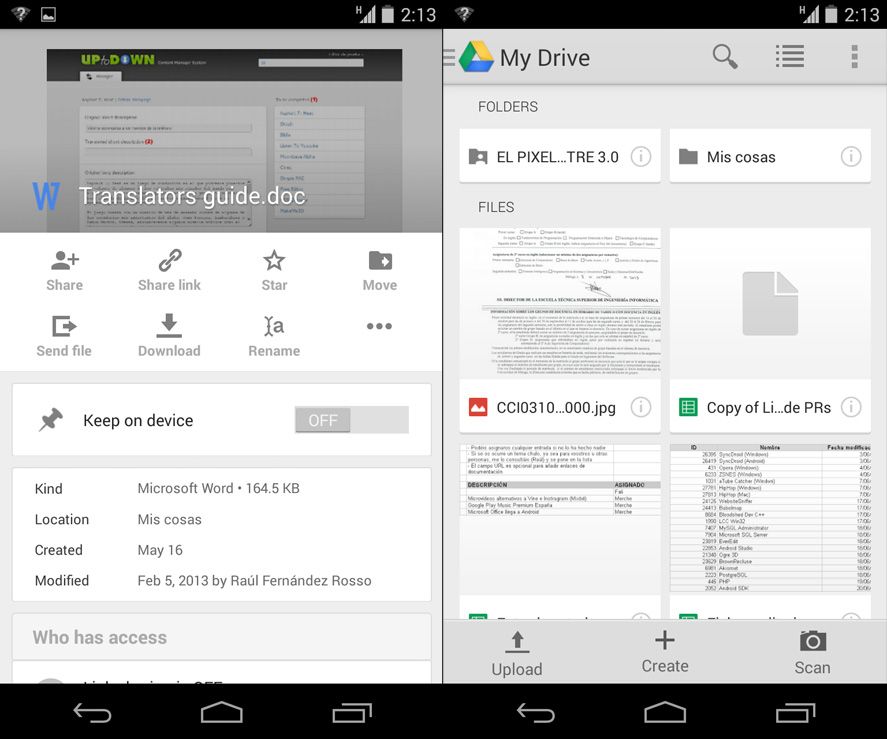 Google I/O 2014 is on, and it’s serving to present the new releases in the company’s ecosystem of tools and services. Some of the main new features at the app level have been focused on stepping up office IT services and cloud file management, and thus we’ve seen an update for the official Google Drive app in version 2.0 and the launch of Slides, an official tool for viewing and editing presentations, joining the word processor and spreadsheet editor that were launched a few months ago.

At the functional level, the app retains the same basic structure as before. What’s enormously improved is the file management, browsing, and administration from the app itself. Now greater emphasis has been placed on the tab with the context information of each individual file, so that you can view all the details in one place, both a preview image of the content and the creation and modification details, as well as all users with access enabled and their level of permissions. You’ll also have better access to actions you can do to each file: share, edit, move and edit properties. And what links it to the other mentioned feature—its native compatibility with documents from Microsoft Office and the new file definition that allows you to view and edit slide presentations. And best of all, you’ll see a chronological list of all the changes done to the file as well as the user who made them.

As if that weren’t enough, a new subscription storage method has also been released for companies. Google Drive for Work will offer unlimited cloud storage space for 10 dollars a month, although there are certain limitations (described on their official blog) depending on the number of company employees.

Google Presentations, the latest addition to the family

In April Google launched its native Docs and Sheets applications to edit text documents and spreadsheets. These allow you to work directly with these file types from the Drive app and avoid having to turn to other tools. The only thing missing from this set of Microsoft equivalents was PowerPoint, hence the release of Google Slides.

With this tool you locally edit slide presentations stored in the cloud. You can even make whatever changes you like without an Internet connection and upload them later. With the arrival of Sheets, Google is now completely autonomous when it comes to office IT software. It’s for this reason that QuickOffice, the suite it acquired a few months ago, was pulled from Google Play this week. Nevertheless, we still have the APK for it on Uptodown, which is still totally functional (though as of today it will no longer receive updates).

What exactly is “the cloud”?

How to use voice dictation tools for writing