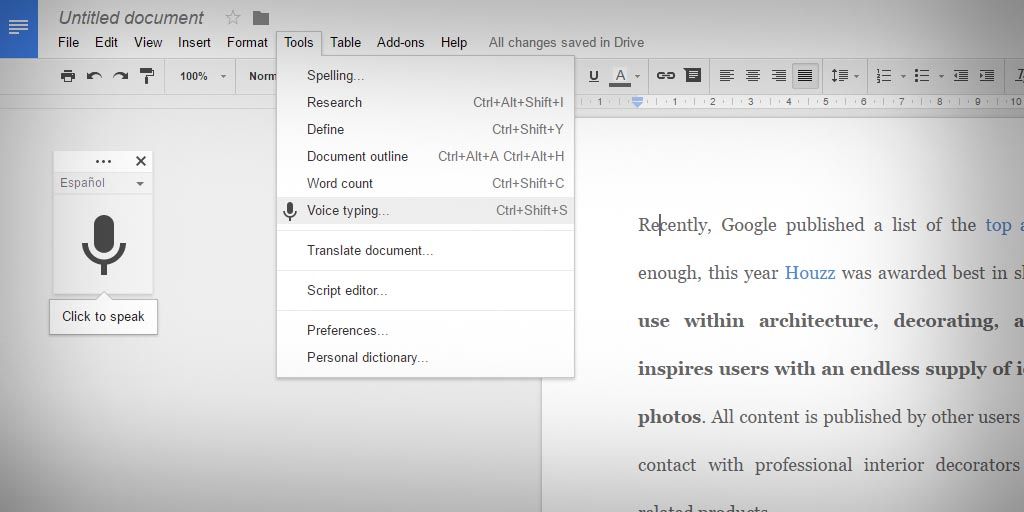 Seems like everybody’s got carpal tunnel syndrome or other wrist or arm injuries these days. Whether it’s just a temporary condition or a permanent disability, a problem like this is unquestionably a terrible burden on people whose job it is to spend hours in front of their computers typing. Though you’d think the major operating systems would have covered accessibility issues a long time ago, sadly that’s not the case. Google Docs‘ voice recognition system, for example, has only been around since last September. And as for Microsoft’s … maybe best not to go there.

Voice recognition on Google: A marvel, but still green

Since September of 2015 it’s been possible to use Google’s voice detection tool in its word processor. You turn on the feature by going into a document, then clicking Tools > Voice typing. A window will pop up that you have to click on to start. You’ll obviously need to have a microphone connected. The system recognizes several punctuation and spacing commands, in particular:

Although dictation itself is available in practically any language, these commands work in German, Spanish, French, English, Italian, and Russian. What’s surprising is that all the advanced editing commands work only in English. That non-English speakers can’t do operations as basic as deleting the last word or paragraph with voice commands is actually kind of offensive at this point. Especially considering that Google recommends in its official guidance that you avoid deactivating the voice recognition while using it and that you move your cursor with the mouse to where you want to insert text or make changes. The majority of people who turn to voice recognition out of necessity are sure to be delighted by this.

Other available voice recognition tools include the one that comes built into Microsoft’s operating system. No, Cortana doesn’t work: it goes in other directions related more to cheekiness and unnecessary functional interactivity rather than, you know, shoring up system accessibility. You can access the Windows voice recognition system by typing that into the search box. You’ll need to calibrate the microphone and get it “used to” your voice with a tedious tutorial where you have to repeat a series of phrases aloud. In this case, the recognition is not just limited to typing – it can also be used to control most system commands like running applications or opening windows. The problem is with the voice detection itself, which at least for Your Correspondent was much more annoying than with Google’s tool, making lots of mistakes no matter how precise I tried to be with the dictation. This might be because, since it “learns” your voice during use, the system improves over time. Google has the advantage here because if you’ve ever used Google Now on your phone, it might already “know” your way of speaking a bit better.

There are a handful of other external tools that let you enter text by voice. In the case of tools like Evernote, which can transcribe voice notes to plain text, it simply uses the Google API, so the results are practically the same.

There are also paid services like Dragon NaturallySpeaking, which offers an array of features designed to give you full control of your PC via voice commands. On its website you can check out the features in each of the available packages.

PS: This whole post was written by voice dictation.

Google Drive 2.0 and a new app for slide presentations