Home Tops and Comparisons Doze vs Greenify: How to hibernate apps and save your data plan... 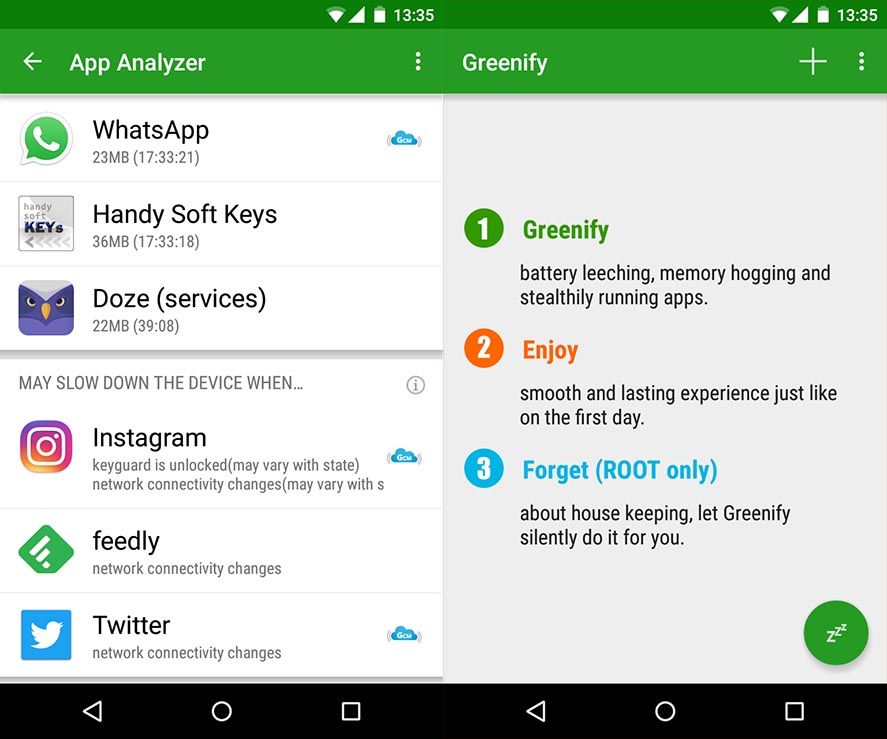 We’ve already explained several times that what most eats up your smartphone battery and data allowance are all those services running in the background and doing constant checks even when you’re not using the device. Greenify – a free and open source tool – has been around for a long time to solve this problem by hibernating background processes. The arrival of Android Marshmallow has brought Doze, which does the same thing, integrated into the operating system, and other third-party apps simulate this feature by funnelling your data through a VPN. So which one’s best?

Why your resources get drained

Imagine you’re away from your device and you start getting WhatsApp messages from several groups at the same time. Messaging apps have to constantly have their ‘ears pricked up’ to be able to receive data, meaning they’re chipping away at your resources at all times. If you’re an active Instagrammer, your notifications will be ‘hot’ from your constant mentions. Now add all your apps running at the same time when you’re not using your phone et voilá, some 15% of your battery can disappear like tears in the rain. That said, you mustn’t confuse hibernating apps with completely shutting them down. Android ‘parks’ certain apps so that opening them later doesn’t involve reloading them in your memory, thereby saving a few resources. (Incidentally, this means that some ‘cleaner’ apps might be worse than the problem they aim to solve, as constantly reopening apps from a clear cache actually consumes more data and battery.) What services like Doze and Greenify do is freeze – but not close – your apps, so when you unlock your device they’ll go back to being fully functional.

As of a few months ago, Greenify no longer requires root permissions, meaning any user of Android 4.1 or higher can use most of the features of its hibernate tool. To do so you’ll have allow the app to make changes and automatically block the screen. Its app analyzer will specify which apps are running in the background, how long they’ve been active and how much space they take up, as well as a list of services that might affect device performance in hibernate mode. The Doze system, for its part, comes included by default on Android Marshmallow. Check out its default configuration from Settings > Battery > Battery optimization, where you’ll see a list of all the services it currently manages automatically. You can remove items from that list as desired. This method is not as aggressive as the one used by Greenify, so you’ll keep getting basic notifications of the apps you use when the device is hibernating. If you don’t have Android 6.0 but wish to use a similar tool, check out the free app Doze – For Better Battery Life. Its main defect is the need to activate data transfer over a VPN, so take care which network you’re connecting to in order to preserve the security of your data traffic. This app’s approach is more radical, preventing all apps from connecting to the network while your screen is off. Which option is best?

The main reasons you might opt for Doze or Greenify are your preferences when it comes to customizing the app. Doze needs nothing to function, being little more than a smart resources manager that runs even without your knowing what it’s doing. Greenify, on the other hand, is much more customizable and lets you block exactly which app is causing your issues. Still, it requires a bit of fieldwork to tweak its system to your needs. If you don’t have Android 6 you’ll have to make do with Greenify or third-party apps that simulate Doze, though if you don’t like Doze’s modus operandi then that’s decided for you. Like plucking petals from a daisy.

Tips to improve battery life on your Android smartphone