It was way back in the 70s that we first got the opportunity to take part in virtual races. Taito, Atari, Nami, and SEGA were the first to give life to this now vibrant genre of video games. Just like many kids years ago in arcades, today you can participate in high-speed races right on your smartphone. To help find the right one, we’ve created a list of the best racing games available on Android. All of them are free, and have enough excitement to burn through a thousand tires. 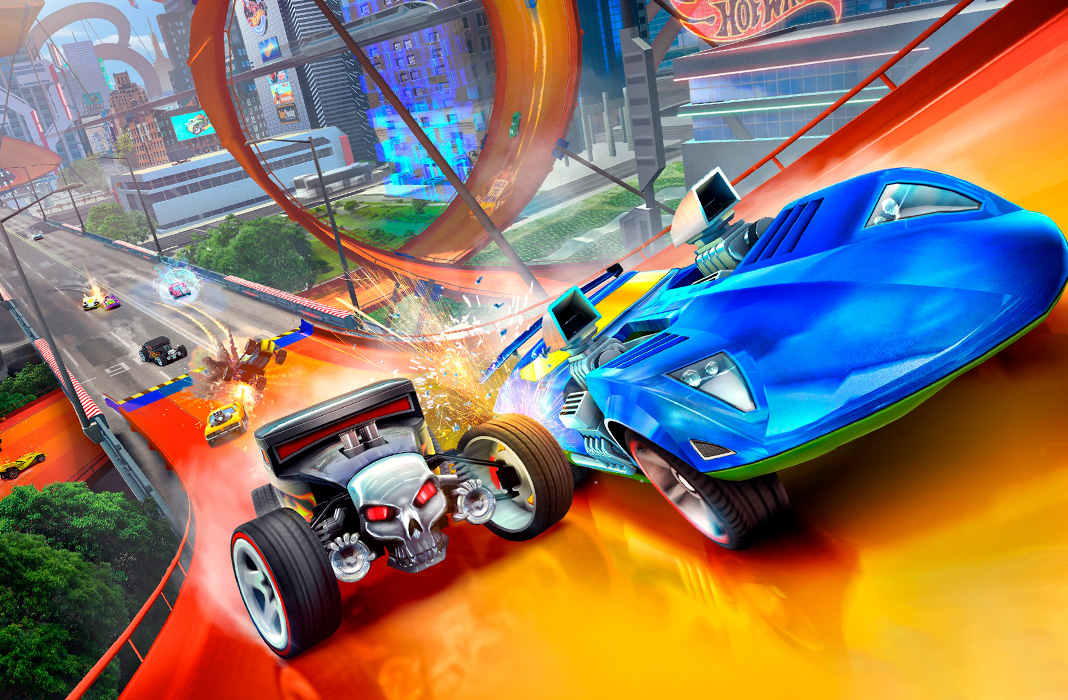 Although it hasn’t come out officially, GC Racing: Grand Car Racing is an outstanding racing game. It’s not going to revolutionize the genre, but it successfully makes sure that anyone can enjoy the speed of the competition from the very first moment playing. The best thing about it would probably be that it’s perfectly adapted for all types of smartphones, whether they’re top of the line or not. [Download] 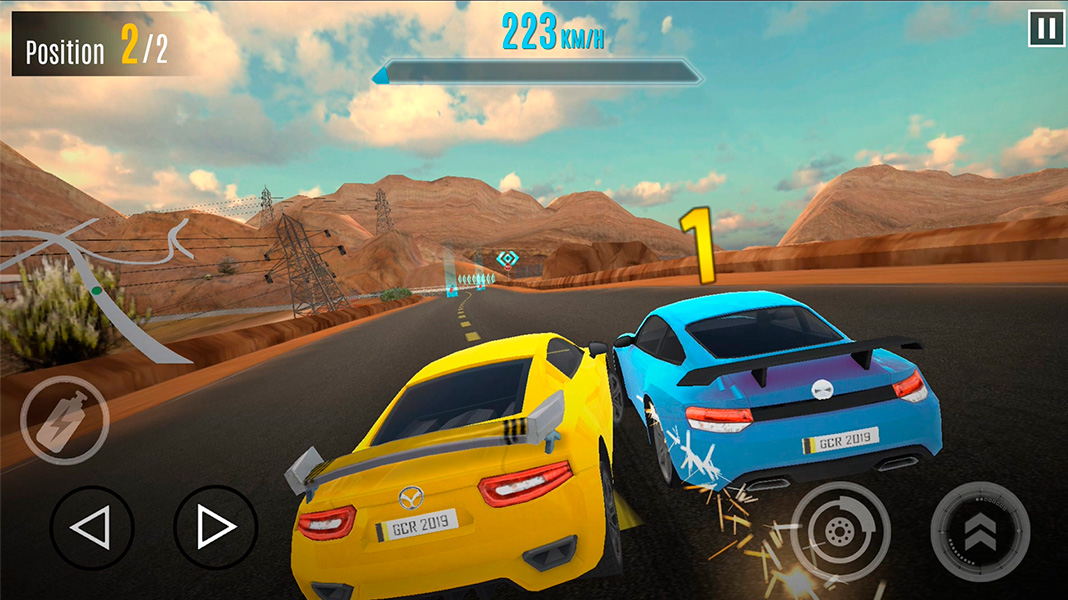 Thinking about rally games takes us back to 1998, when the legendary Colin McRae Rally hit the market. Not that Dirt Rally Driver HD is a sequel or anything, but without a doubt, it owes some of its greatness to the title from Codemasters. Over 100 levels will put you to the test on dirt tracks where you’ll have to give it all you’ve got behind the wheel. It’s not a game that stands out for its graphics, but we’ve fallen in love with the lighting in each one of its screens. [Download] 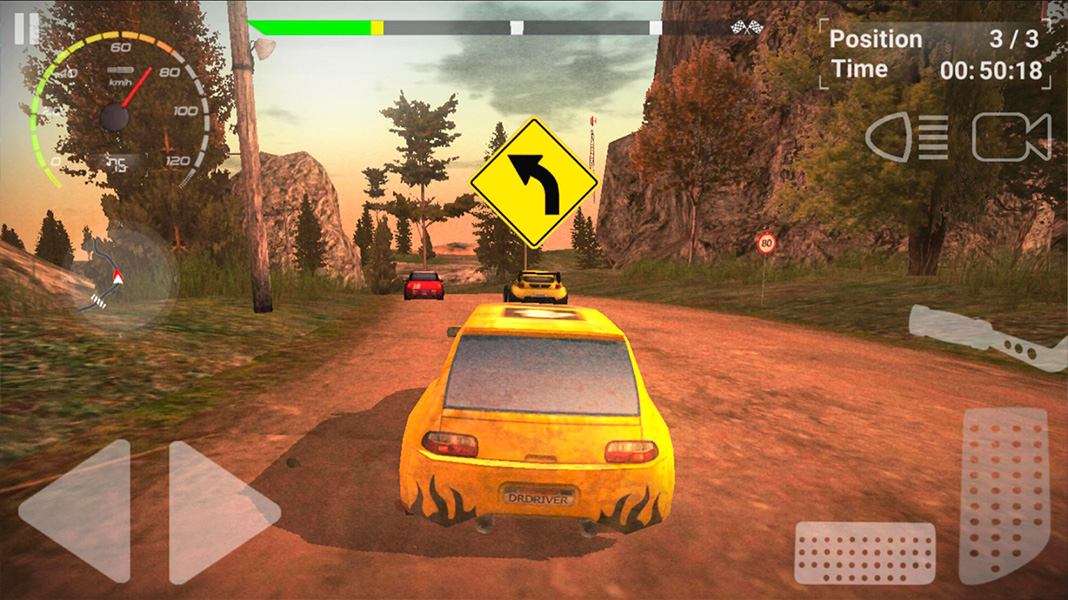 We don’t know what it is about games with isometric perspective, but we always find ourselves going back to them. In the universe of racing titles, we’ve been enjoying quality works with this viewpoint for what seems like forever, and Built for Speed 2 is a great example of this. This sequel improves upon what we saw in the previous installment and keeps us hooked with its enjoyable arcade concept. [Download] 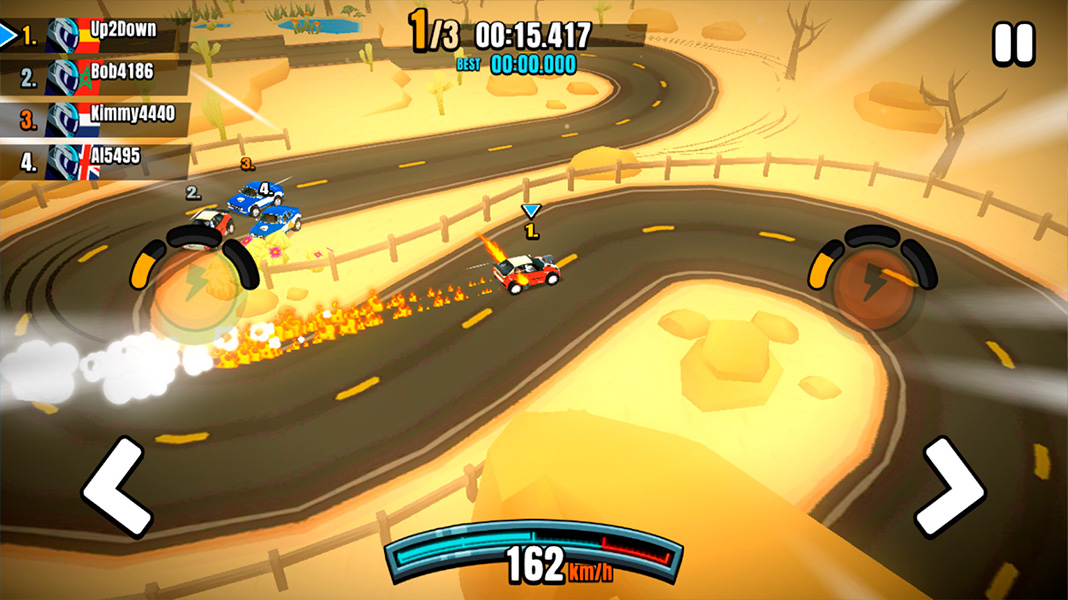 The release of Mario Kart Tour has revolutionized the mobile ecosystem, even though there are plenty of players who are disappointed with the game. That’s why we bring a somewhat atypical solution for anyone looking for a quality kart racing game: Doraemon: Dream Car brings you the classic gameplay from the Nintendo saga for consoles. The characters from this renowned series come back together to compete on tracks full of references. It’s a real gem that many people still have yet to discover. [Download] 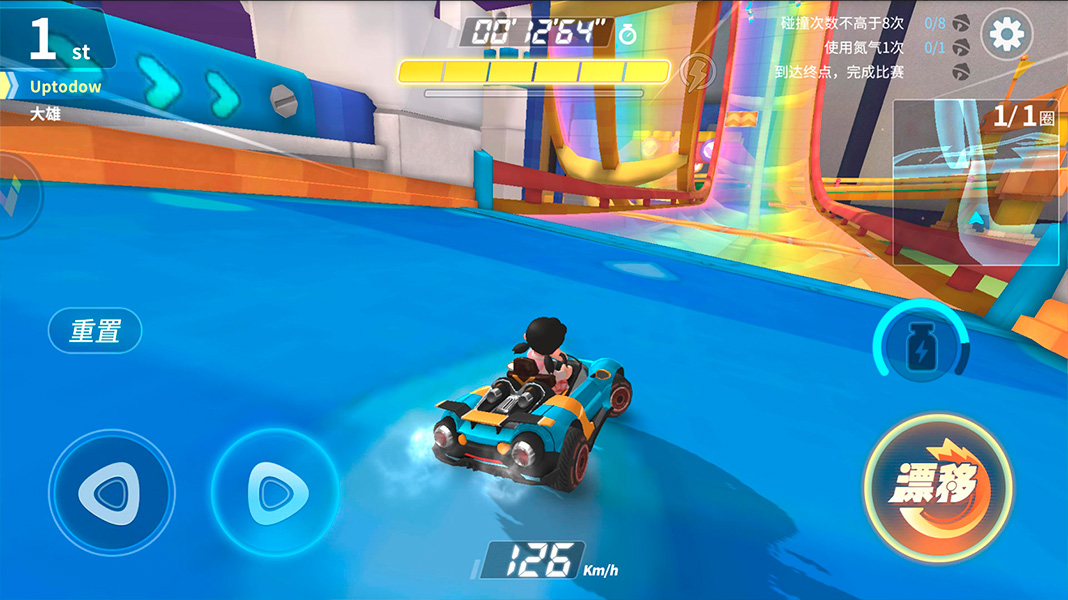 The good people at Hutch Games have become specialized in bringing us racing games in all shapes and sizes. Rebel Racing is one of their latest titles: a game that stands out for its realistic physics and for letting you drive luxury cars. You get to cruise down the west coast of the USA in short, intense levels. [Download] 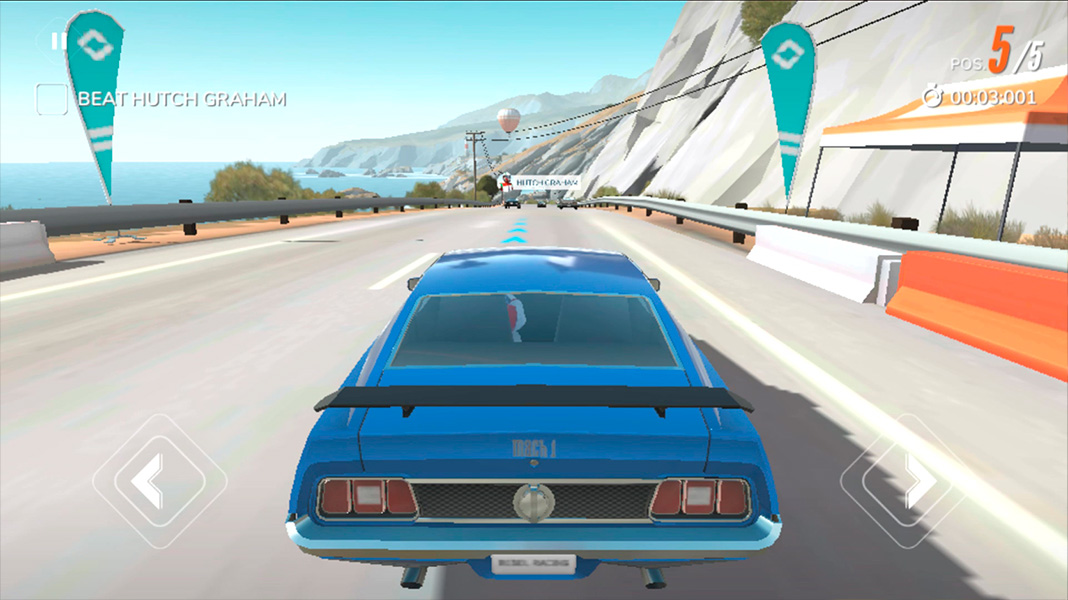 There’s no doubt that the Fast & Furious movie franchise is one of the most popular in the world. The adaptation for mobile devices doesn’t quite reach the same level of awesomeness, but it is a fantastic game that’s packed with possibilities. Not only does it have the typical races, it also has different game modes that add a ton of variety: levels where you have to last as long as possible while you’re attacked from helicopters or races where your objective is to lunge at and destroy rival vehicles. It’s a shame that the servers are going to close on October 31, 2019, but at least we can enjoy it until then. [Download] 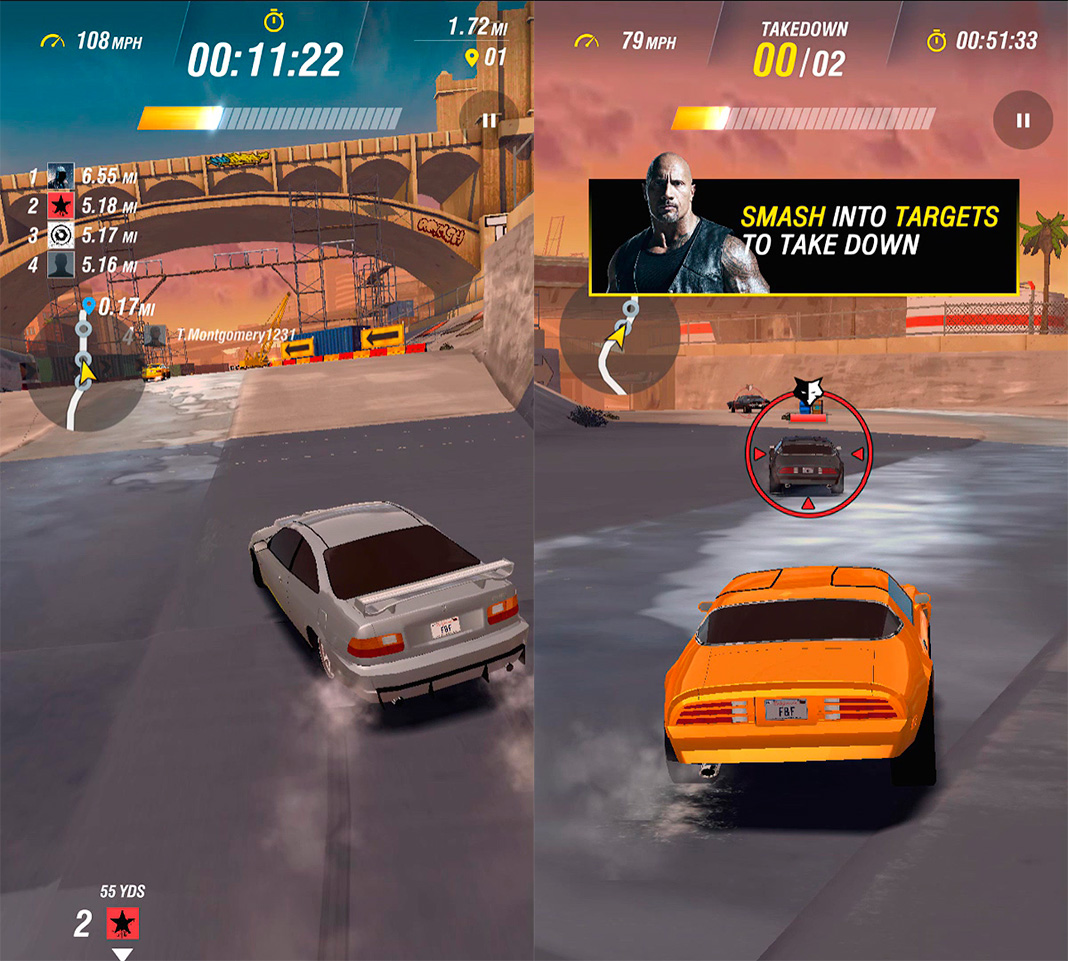 The arcade title #DRIVE has wowed us ever since we first discovered it. There’s a good reason it’s one of the games that chose to highlight in the first semester of 2019. The work from Pixel Perfect Dude is an excellent game where you’ll have to drive nonstop … that is, as long as you have gas, and your vehicle isn’t destroyed. [Download]

Words can’t do this game justice. It’s one of the most relevant racing game sagas in the genre. Gameloft has been going with the Asphalt franchise for a long time now and its 9th installment is a real treat for the senses. The game is spectacular, although in order to be so awesome, it has had to simplify the gameplay quite a bit. Regardless, on a technical level, it’s still one of the top games that exists on mobile devices. Hands down. [Download]

They may not be karts in the strictest sense of the word, but spend a few rounds playing Beach Buggy Racing 2, and you’re sure to be reminded of Mario Kart or Crash Team Racing. This is the feeling that this excellent game from Vector Unit gives. It’s a title that fans of the genre won’t want to miss thanks to the simple controls and colorful graphics. [Download] 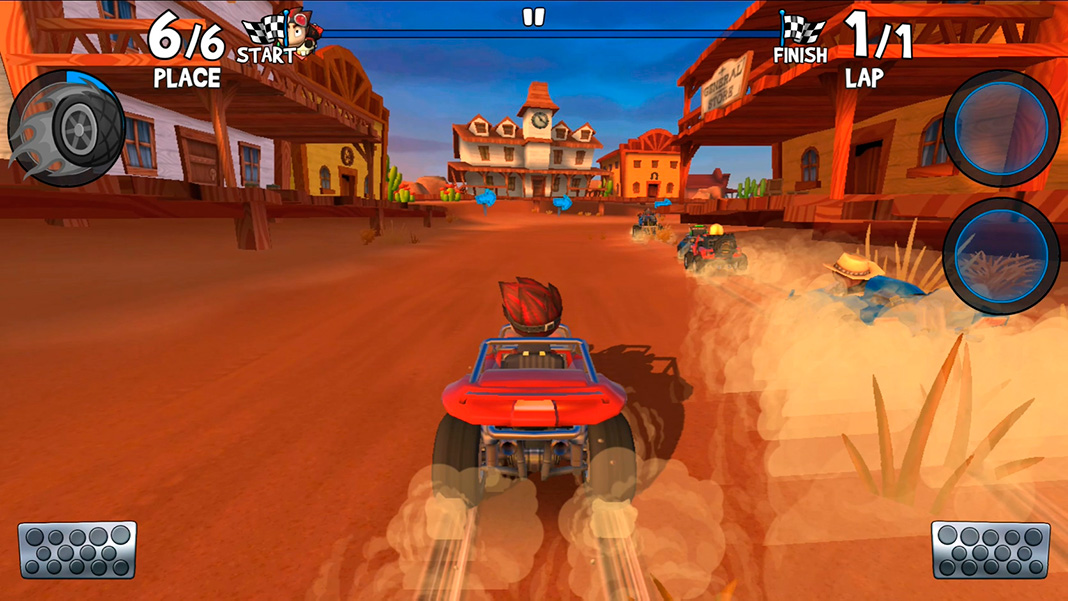 We lose count of all the Hot Wheels games that exist for smartphones, but one thing’s for sure: Hot Wheels Infinite Loop is one of the best racing games that exists for the medium. Not only does it stand out on a technical level; it also has various game modes that make it nearly impossible to get bored. The one you’ll probably spend the most time playing is a competitive race with teams of 4 where the winner isn’t the first to the finish line, but the instead, the team who has the most cars in the top spots. [Download] 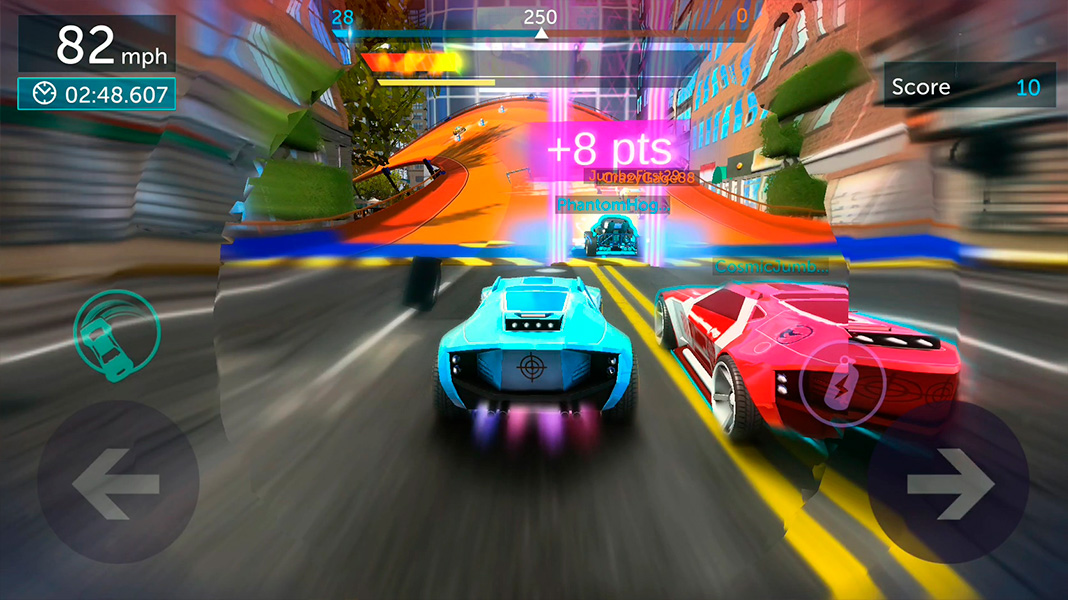 Racing games have always fallen into one of two categories: arcade – crazy races, or simulation – closer to reality. Although games usually fall somewhere on this spectrum, one curious subgenre has recently become popular on Android. In it, rather than driving, you have to change gears as quickly as possible. Nitro Nation is a great option to burn some rubber in drag races taken right out of Fast & Furious. [Download] 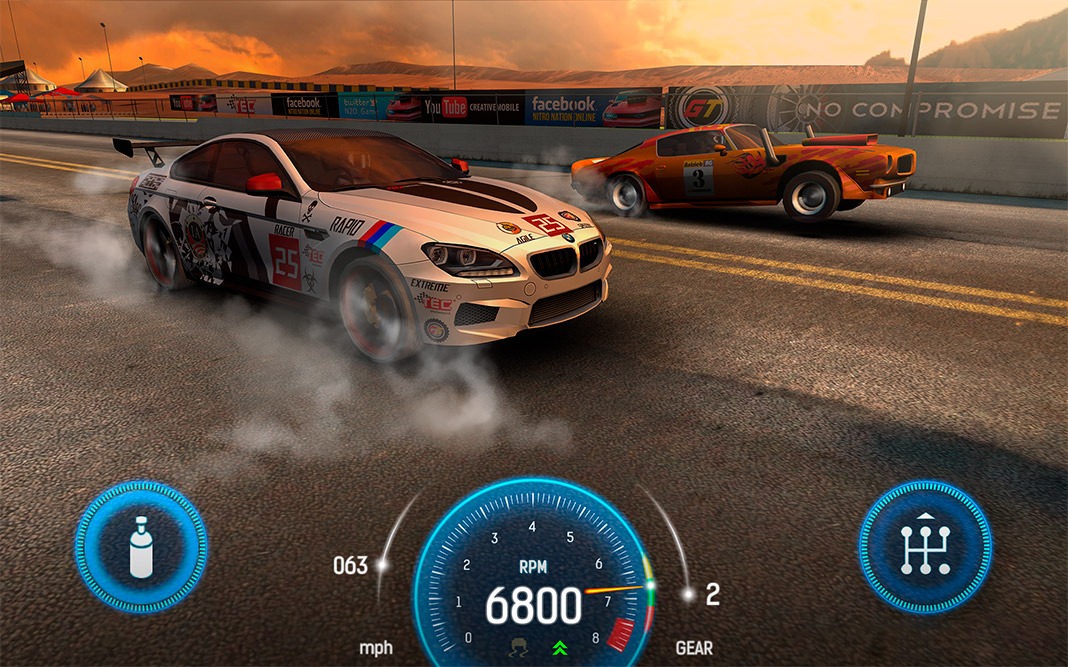 You have to admit that all traditional racing games on the Android ecosystem are quite similar. Choosing one usually comes down to personal preference, but there are a few small differences that can help you make the decision. Driveline features the same excitement and intensity of other racing games, but it lets you choose between three different unique vehicles to hit the asphalt in: rally cars, street cars, and 4x4s. [Download] 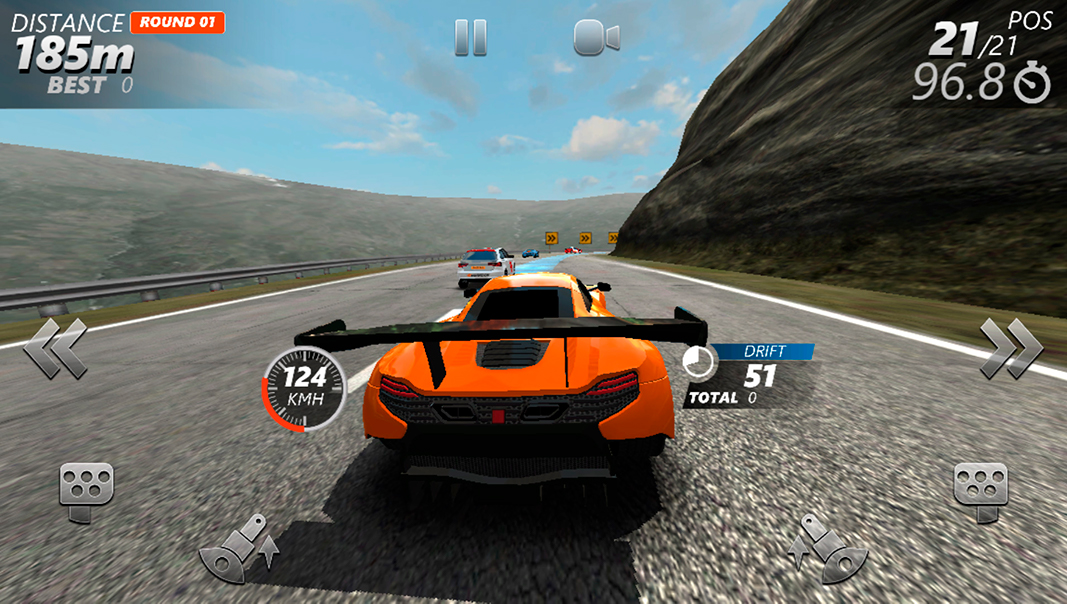 The Driving Zone saga has always strove to stay as close as possible to a true driving experience. This game stands out thanks to its amazing graphics and realistic physics. Although you can drive on roads filled with Japanese cherry blossoms flowers, we recommend the Teutonic roads. [Download] 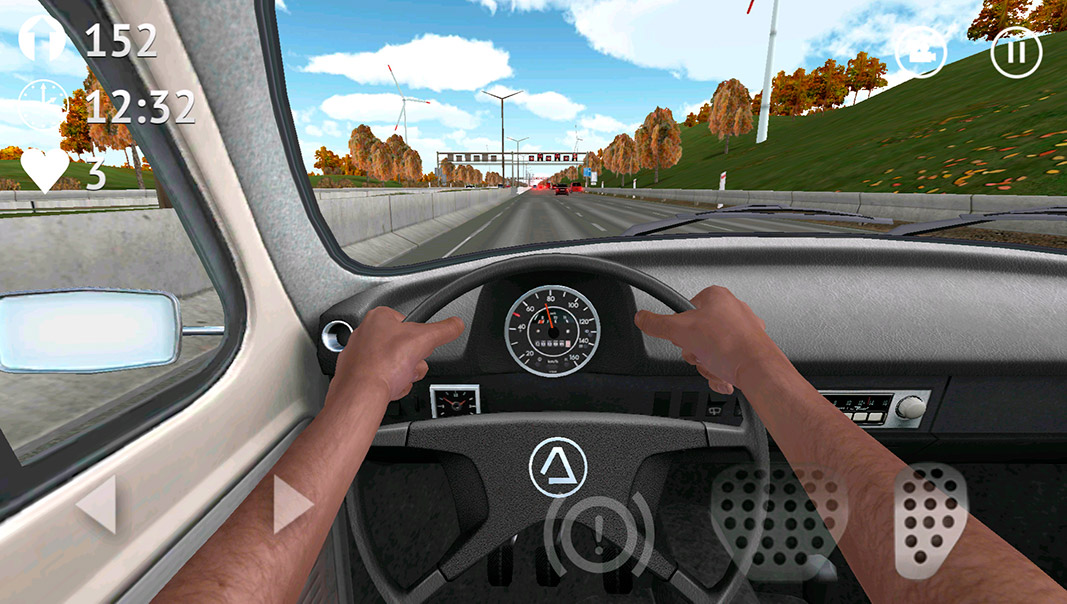 There are a lot of big names in this game. Many people dream of driving a Mercedes AMG C63S or a Lotus Elise 220 Cup, and you can make that dream a (virtual) reality with the fantastic Gear.Club. It’s a dizzying title that features a great graphics engine that can compete with other big name studios. It’s one of our favorites thanks to its elegant design. [Download] 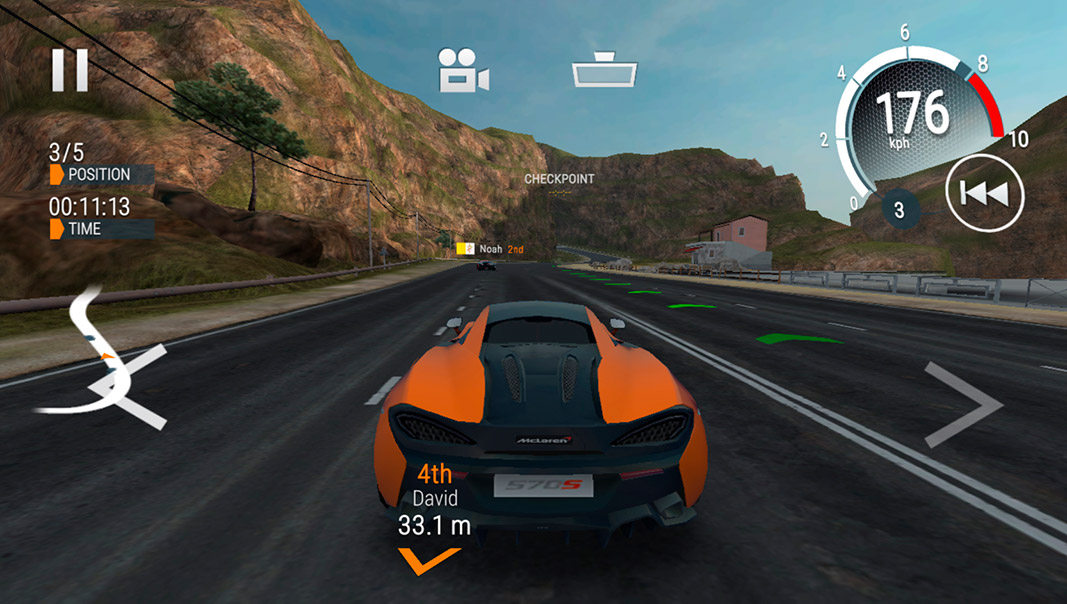 Many games have you drive around urban streets and scenes filled with obstacles that you have to dodge. Not ThunderdomeGT. Here the races are more similar to Nascar, where you have to drive a certain number of laps around a circular track. It might not sound particularly exciting, but that couldn’t be further from the truth. Winning each of the races won’t be easy, and you’ll have to put the pedal to the metal if you want to finish first. [Download] 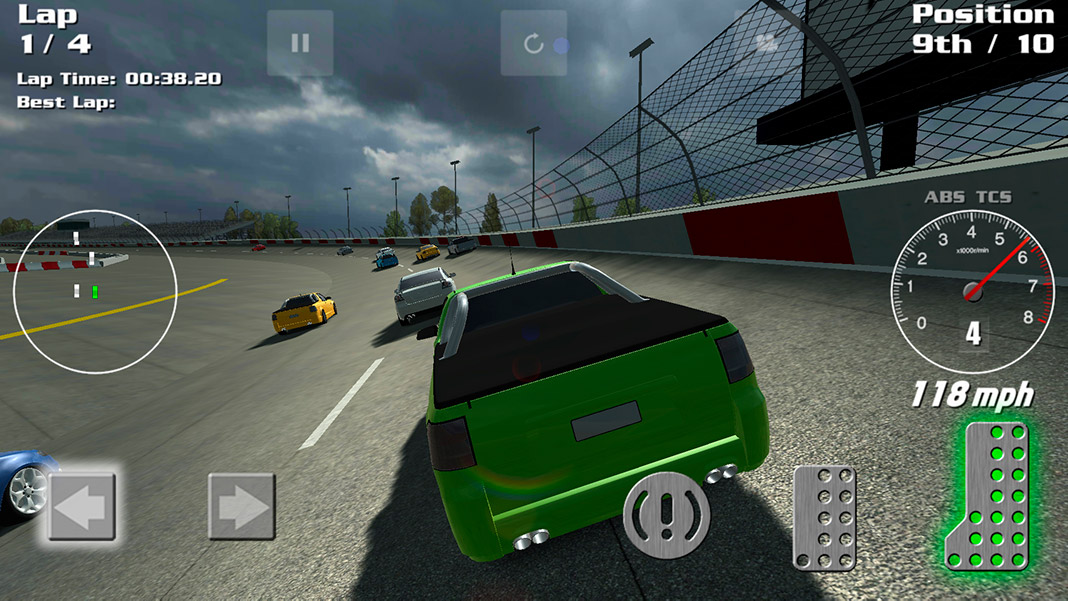 Classics never die, and Soner Kara is an essential Android racing game developer. While their Traffic Racer is a legendary title on Android, Traffic Rider manages to up the ante. This time instead of driving a typical car, you’re given a motorcycle. The first person perspective will truly submerge you into the different levels, and if you want to win, you’ll have to complete a series of objectives or last as long as possible. [Download] 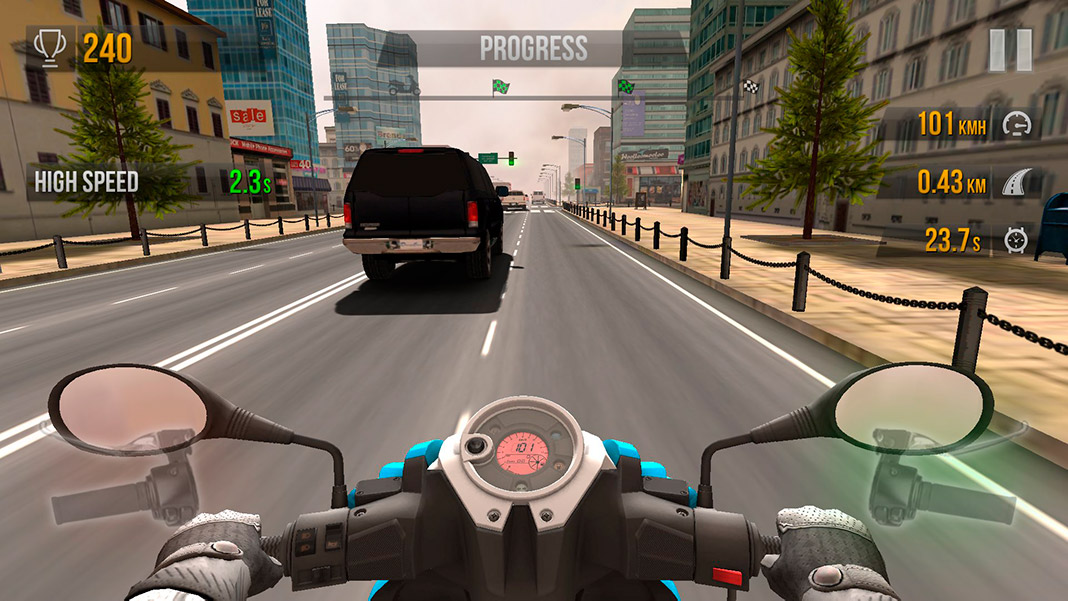 EA is behind the Real Racing franchise on mobile devices, and the third entry in the series takes place on some truly spectacular circuits. The scenery is further enhanced by the parade of cars that you have to compete against. It’s a technically brilliant title, although it does have an annoying micropayment system that lowers its standing a bit in our eyes. [Download] 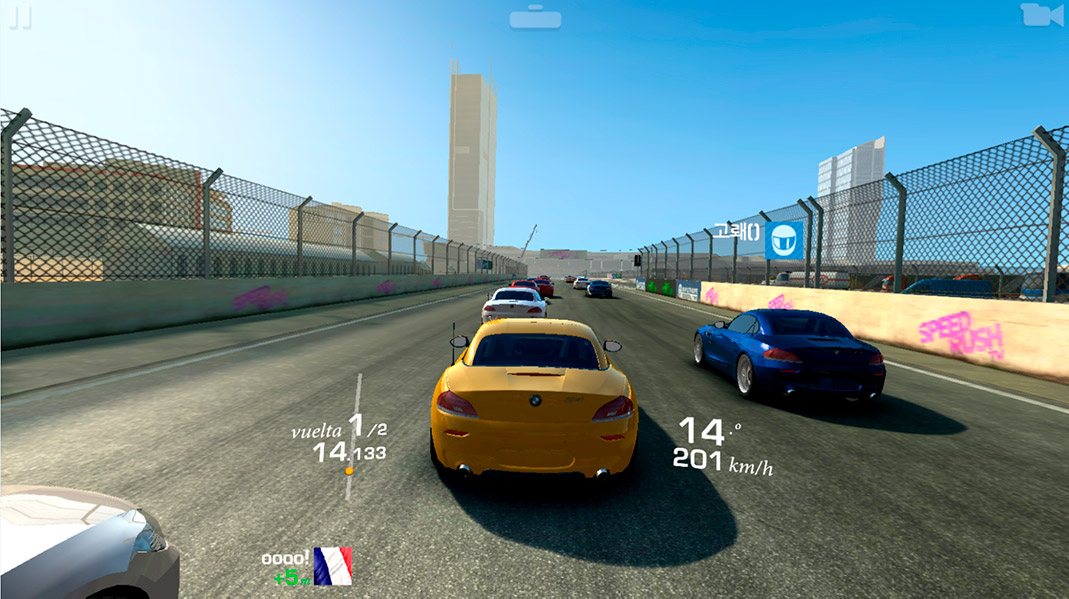 We return to the world of racing with a special adventure from Dominic Toretta and crew. Exciting duels between luxurious vehicles have never looked better thanks to its incredible graphics. This game looks so good that you’ll find it tough to not get pulled into the world of street racing. Plus, it managed to snag official licenses from lots of big manufacturers, so you’ll see many well known car models. [Download] 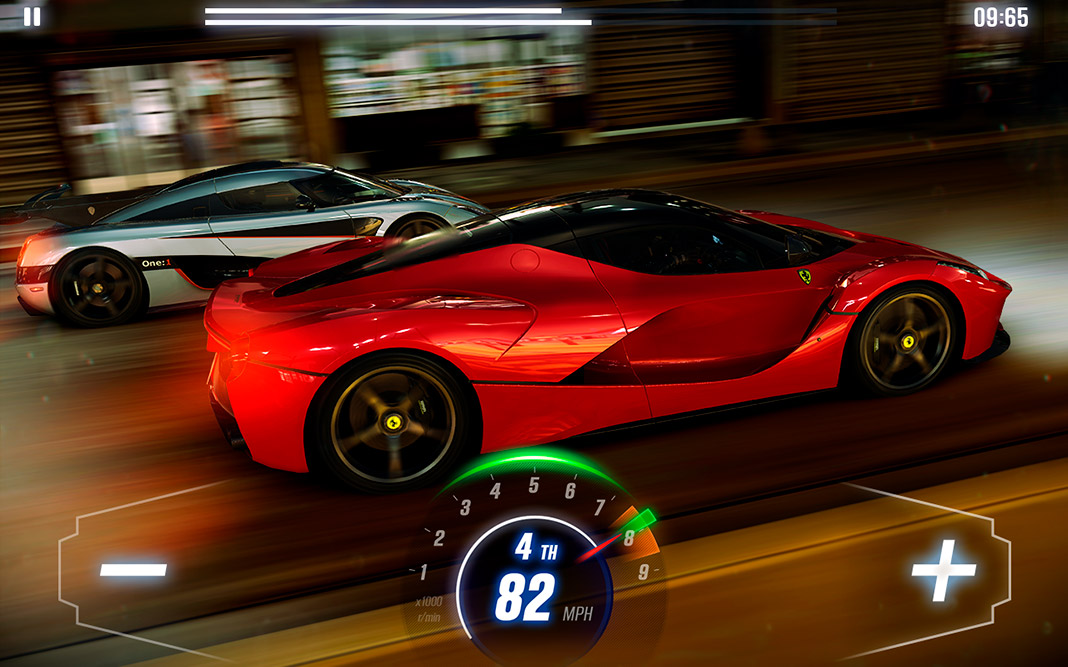 Need for Speed No Limits

The Need for Speed franchise has around since 1994, and without a doubt it’s one of the most prolific sagas in the history of the genre. It’s a game where fun comes first, a sentiment that was taken to the extreme with entries like ‘Most Wanted’ and ‘Underground’. Urban circuits and illegal racing are the strong points of the series, and that trend continues in this great game for Android. [Download] 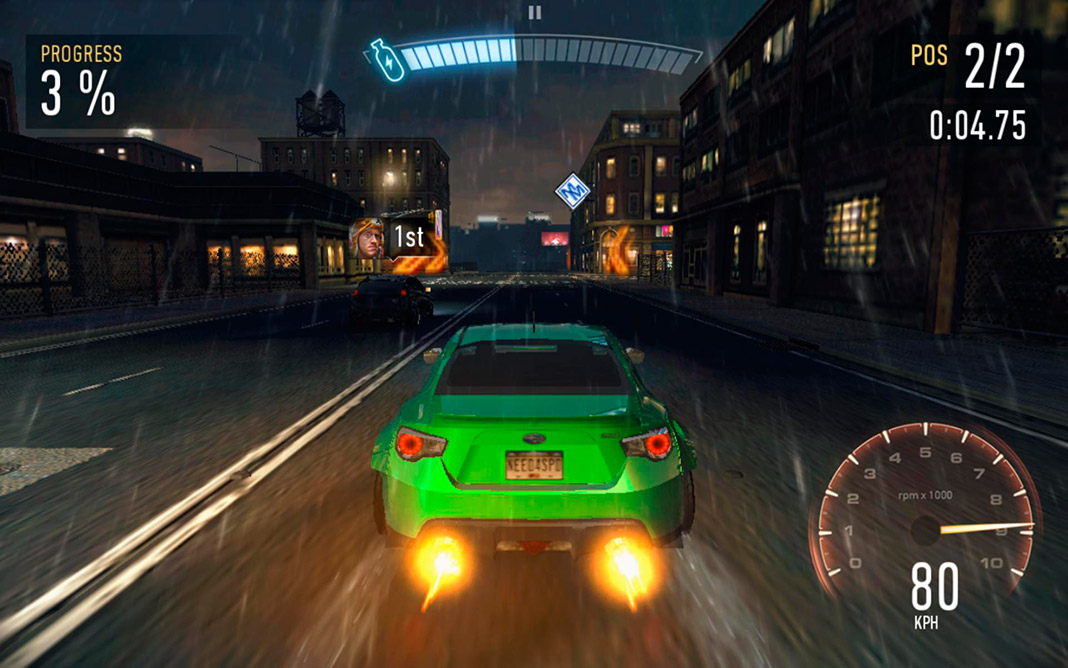 Gameloft has made some pretty bad games, but the Asphalt saga is one of the most legendary series on Android. The games are inspired by other franchises like Burnout and Need for Speed, so you can rest assured that they’re action packed. We’ve chosen Asphalt 8: Airborne as one of our favorites thanks to its spectacular aerial style. Not only will you drive through amazing tracks filled with obstacles, you’ll also get the chance to perform some breath taking vehicular acrobatics. It isn’t every day that you get to make incredible jumps in a Lamborghini. [Download] 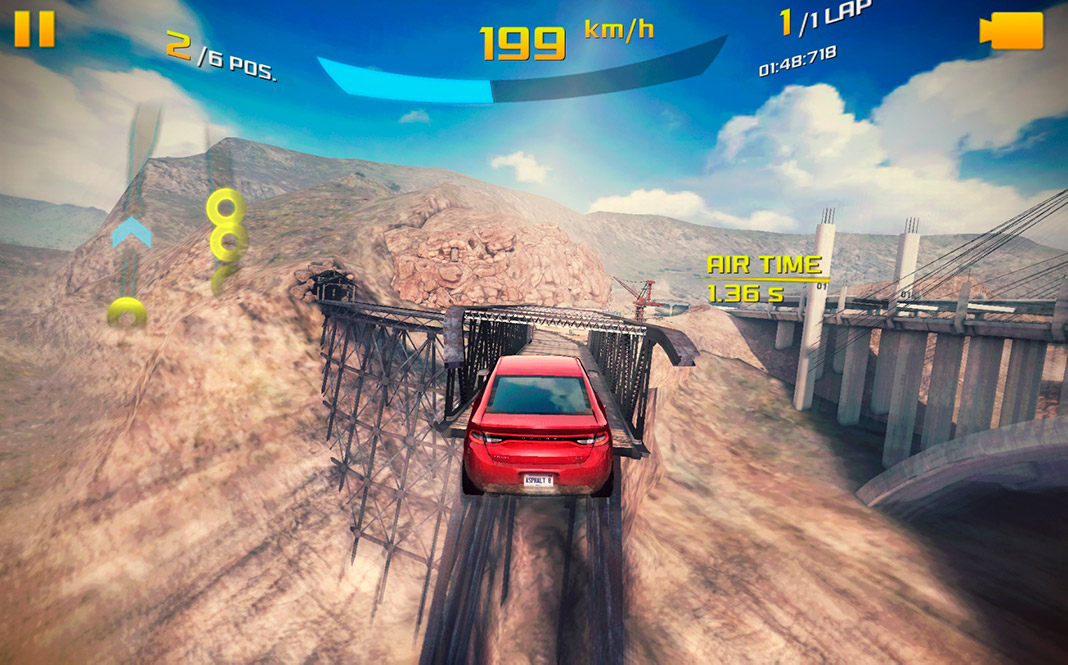