Home Software Reviews Organize all your shows with TV Time 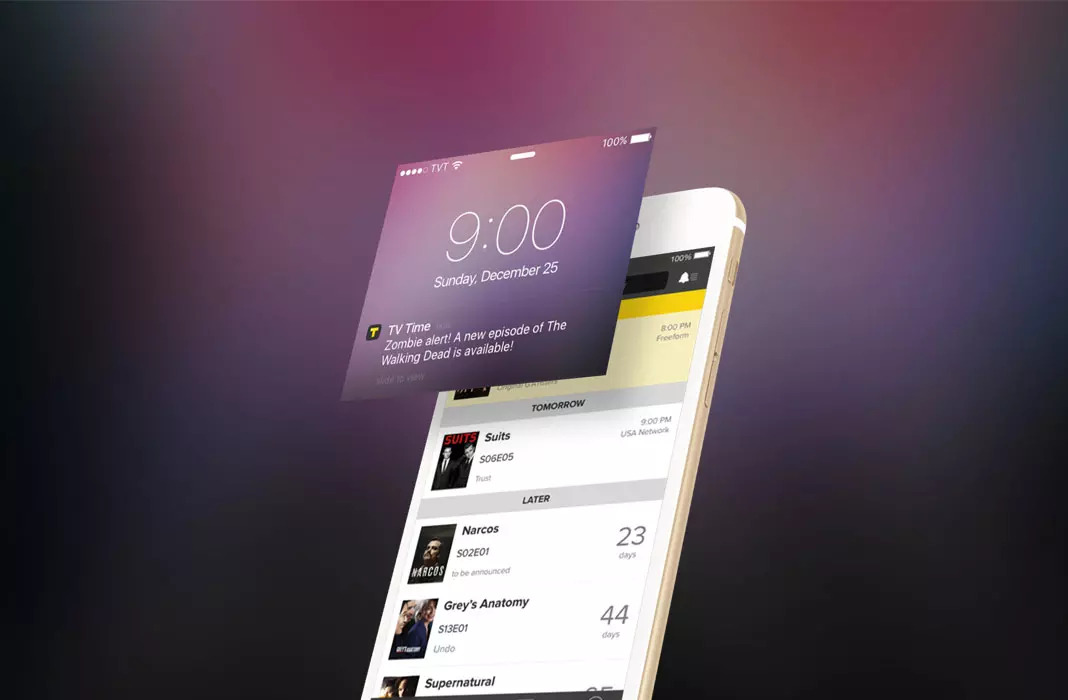 We spend all day watching TV shows. On all the platforms, tablet, TV, or smartphone. We follow all sorts of content and we look forward to new episodes week after week. If you don’t want to miss a thing, you can keep track of your series with the app TV Time for Android.

Aside from the “traditional” television, there are plenty of different platforms that stream content nowadays. This means you can follow tons of different shows through services like Netflix, HBO, or Amazon Video. It’s not always easy to keep track of which episode you’re on or know when a new season is going to premiere for a series you stopped watching months ago. That’s where TV Time (known as TVShow Time before) comes in handy. You can keep track of all the shows you watch and find new ones that are similar to ones you’ve seen with this useful app. 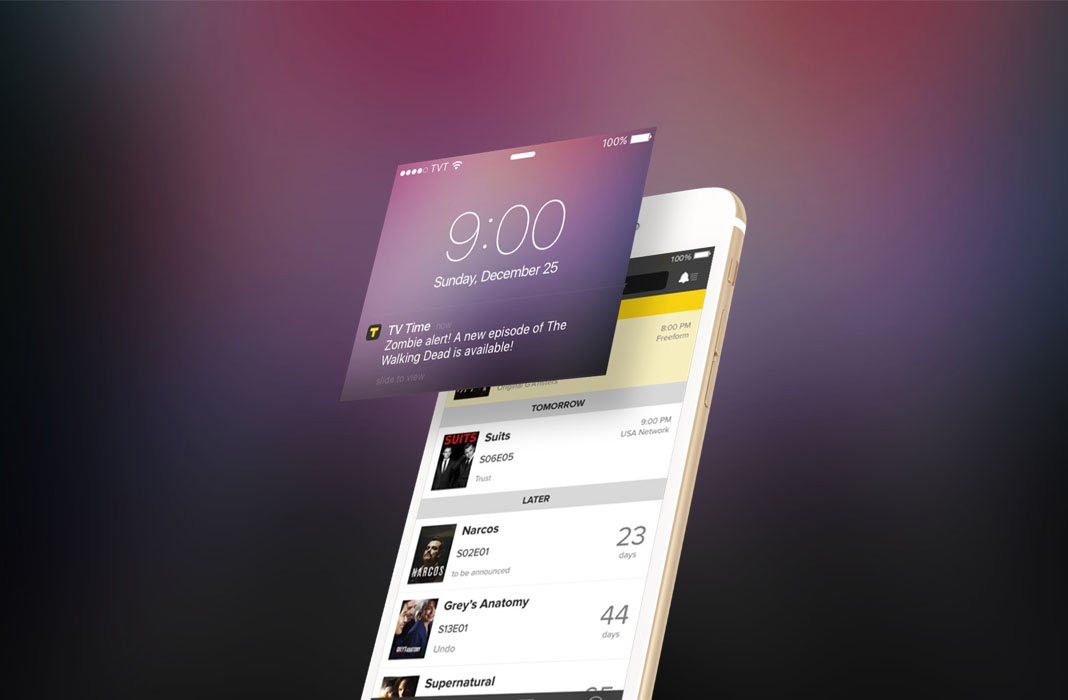 Organize your shows with TV Time

TV Time lets you search for shows in the app and add them to your profile. There are more than 50,000 different entries in the database, which are available from the moment the air date is announced, and include endless platforms. Once you select the series that you’re interested in, you’ll have five major categories which can include: finished, up to date, watch later, not started, and watching. You can have all the shows you’ve seen or are currently watching, easily seen at a glance. 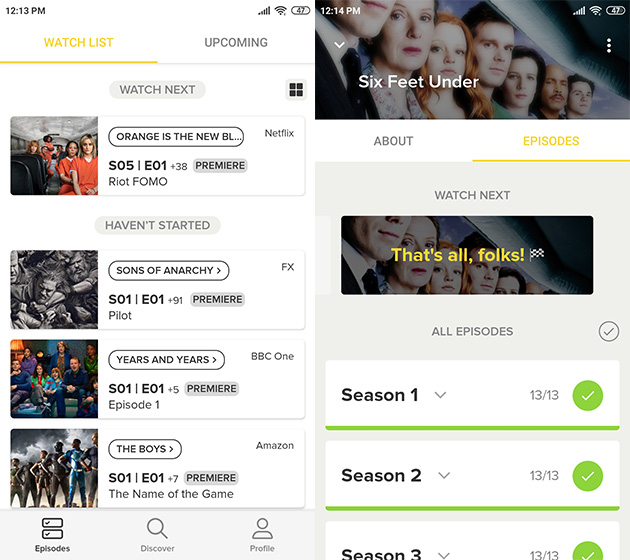 When you watch an episode, you can mark it in TV Time so you’ll know exactly what episode you’re on. Most streaming platforms like Netflix, Prime Video, and HBO automatically tell you what the next episode is, but sometimes you’ll need to keep better track. For example, if you share your HBO account and another person has watched the show you follow, you won’t know where you left off. Likewise, some platforms don’t mark episodes as seen if you watch them offline, not to mention what happens if you change your user account and lose your history. 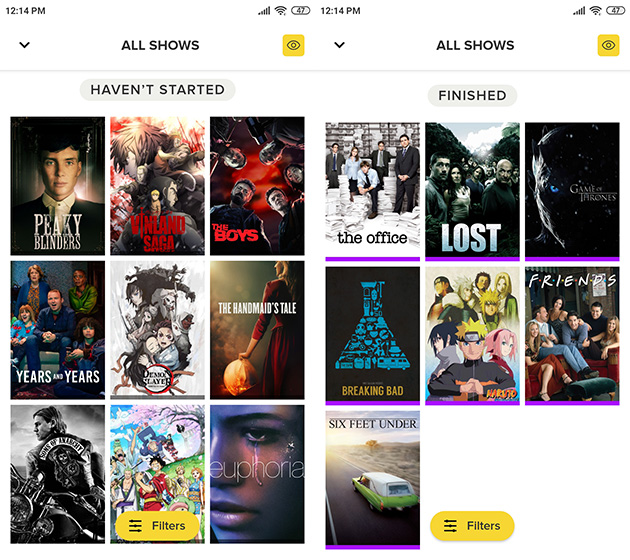 The app will also come in handy to get a quick and complete look at everything you’ve seen. If someone asks you for a recommendation, TV Time will let you look back what you’ve seen and even what you thought of them according to how you rated each one. You can access your profile and you’ll have a list of all the series that you’ve seen and which ones are finished (or were cancelled), the ones that have new seasons coming up, or the ones you’re completely up to date on, for example.

Through the app, you can rate each episode and record your opinion of it. Any time you mark an episode as seen, the app will let you give it a rating out of five stars, and also use emojis to represent how the show made you feel: happy, sad, surprised, etc. This way, you can let other users know if it’s worth watching or not. 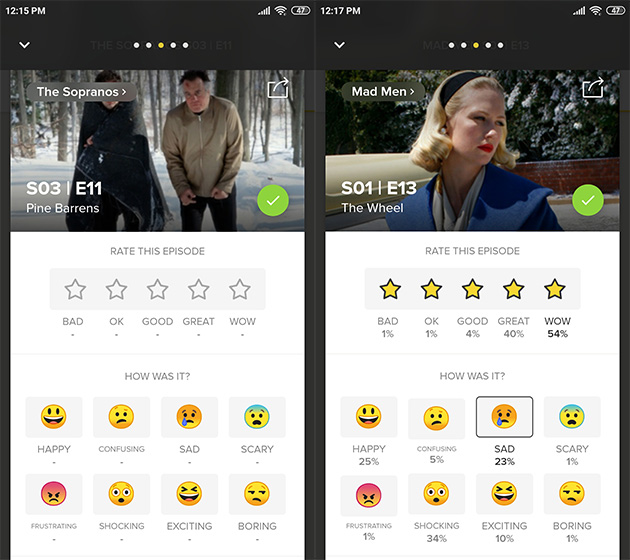 One of the most interesting features in TV Time is knowing when new episodes or seasons are coming out. From the “Episodes” tab, you’ll see a timeline with the current date and the upcoming premieres available for the series you follow in the app.

You’ll see the exact air date and time, information about the show itself, the episode number and season, and the platform where you can watch it. This way you can see at a glance what’s coming out in the next few days and plan what you want to watch. Not only will you see the upcoming releases for that week, you can also take a look at all the episodes and confirmed seasons, even if they won’t be aired for months yet. You can easily keep track of the upcoming releases and get a plan in place to watch them all. 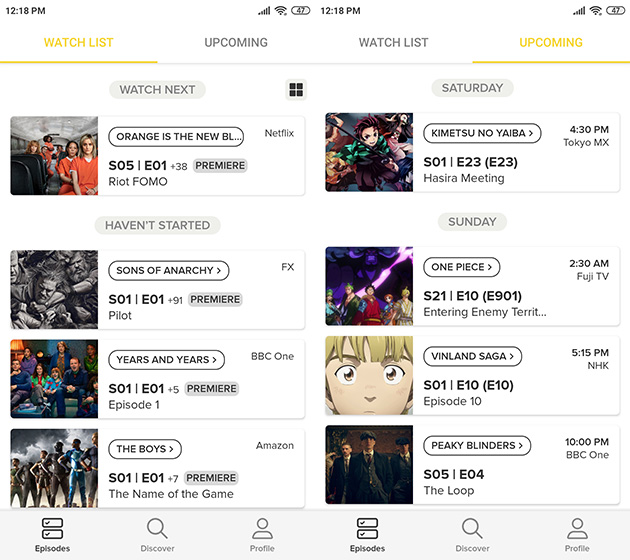 Another one of the most interesting options is the ability to discover series recommended for you according to ones you’ve seen and rated. You can access a list that will show you the series that are trending recently to see if they interest you or not. When you select each title (either in your profile or not), you’ll see a synopsis, duration, what platform you can watch it on, and even a link to the trailer.

When you go to the Discover section, you have two options: top matches for you and trending. In the first one, you’ll see a percentage representing how much it matches your interests and the series it’s similar to, and that’s how it’ll pick each one of your recommendations. You can also see what platform it’s shown on and how many seasons it has. If you like what you see, you can add it to your list of shows to watch to remember to check it out later. 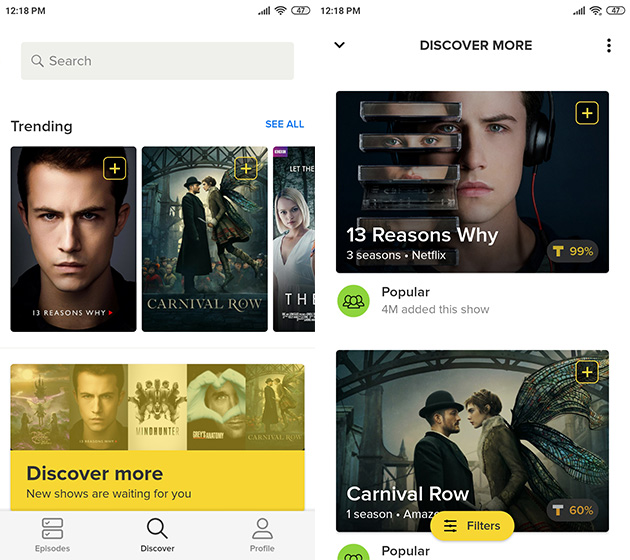 In the popular section, you’ll see what’s being watched right now. You’ll see the title, the number of seasons, and your interest level for the show. You can also read comments to see if it’s worth watching. It’s up to you to decide if you want to add it to your list or simply ignore the recommendation. You can also filter by genre or finished titles, if you don’t want to wait for new episodes or upcoming seasons.

TV Time also shows you charts and statistics about the shows you’ve seen, how much time you’ve spent watching a certain platform, or how many episodes you’ve seen in all. You can see the total amount of time you’ve spent watching shows in your entire life (or at least since you’ve signed up for the service), adding the time of each one of the episodes you’ve seen and recorded. It also shows you when your longest marathon was, the day that you’ve watched the most episodes in a row from a single series, and how many you watched.

The app also lets you unlock badges. You’ll unlock them if you watch multiple episodes of a series in a single day, if you watch episodes every day for multiple days in a row, among other “challenges.”

TV Time is a complete and totally recommendable app for anyone who loves watching TV shows. Whether you want to keep track of the episodes you’ve seen, discover new shows according to your history, or search through your favorites to offer recommendations to friends. You can have all the information about new series that you didn’t know or about new releases, and you can read other users’ comments. You can follow your friends to see what they’re watching and they can follow you too, so you can compare opinions and see which ones you liked best.

If you simply like watching shows and you like keeping everything organized, this is a great app. It’s convenient to be able to keep track of everything, and feel accomplished when looking back at everything you’ve managed to watch.