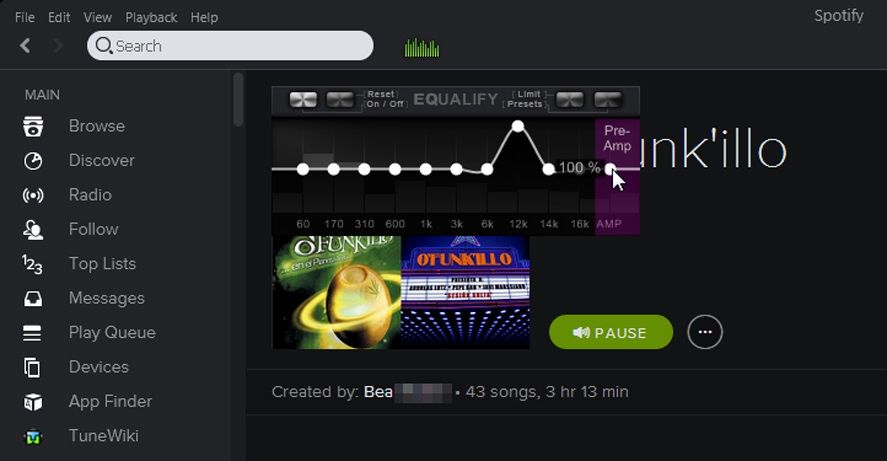 Since the birth of Spotify in October 2008, this music streaming service has come to boast a catalogue of around 20 million songs and has topped 40 million users around the world. Its popularity is incontrovertible and has been achieved by offering excellent features. Nevertheless, the user experience can be improved even further by using external add-ons with new features still not included in the Internet’s star streaming app.

Toastify is a small app that will make using Spotify much more practical, since with it you won’t have to go to the program’s interface to change songs, pause playback, or increase the volume and instead can leave it running in the background and do these actions with your keyboard.

This tool makes it more comfortable to combine your work with enjoying your favorite music, without taking a hit to your productivity. Your keyboard shortcuts are entirely customizable and let you control the main functions: switching songs, increasing or decreasing volume, pausing and restarting playback,and opening the Spotify interface.

In addition, Toastify also displays a notification with the title and artist of the song being played, which can be quite useful if you like listening to playlists that you didn’t create yourself.

How often have you been listening to a song and had to stop and look up the lyrics on Google? TuneWiki is a Spotify app designed to save yourself that hassle which instead directly displays the song lyrics in the program interface for the track you’re listening to at that moment. In addition, the text doesn’t appear in static form in the window, but rather is synched to the music to show you the lyrics as if it were karaoke, highlight the line playing in each verse.

You should keep in mind that this utility is not one to install on your desktop independently, but rather is integrated in the service, meaning that to run it you have to open Spotify and go to the “Search applications” option in the start menu. Once there, you should type in TuneWiki in the search bar or search for the most popular apps, as this one is, at time of writing, in second place. Equalify is an add-on that provides what many users long for from Spotify: an equalizer. This plugin embeds a new option alongside the search bar that you just have to click on for it to open a small window where you can modify the sound of your music in quite a similar way to the classic Winamp: with 10-band audio and a pre-amp.

With Equalify you can adjust each level as desired, controlling the peaks and troughs and also saving your changes as preset profiles. That said, if the button doesn’t appear straightaway remember to restart Spotify and play the song. Lazify: Bye forever to the bore of creating playlists

If you utterly hate sitting down to create a good playlist but you love having a long music queue, Lazify is a Spotify app—in fact, it’s installed the same way as TuneWiki—that automatically creates complete playlists just by dragging a song to the tool’s window, which is based on Last.fm and recognizes the song and relates it to similar artists.

Playlists can be as long as you like: from 10, 25, or 50 songs to a maximum number of uninterrupted listening hours. The results are quite good and should hit the mark in terms of your music taste. Perfect for slackers! Forgotify: Songs that no one else is listening to from artists nobody else knows

Did you know that 20% of Spotify’s content has never been played? Within its music library there are songs that no one has ever listened to (at least from this platform), meaning if you really want to discover music in the purest sense of the word, with Forgotify you can taunt your friends—without lying—about being the first to hear a song before anyone else.

Forgotify is a webapp with a very simple mode of operation: you log in, the song appears, you click play, and you hear it directly on Spotify. If you don’t like it you can click “Next,” and if, on the other hand, you do, you can share it with your social networks. The world of unknown performers will surprise you.

The Long Tail: Unknown songs from your favorite artists

The Long Tail is an add-on that combines the two previous tools: long playlists with songs few people know. This web platform searches the Spotify database for an artist’s least-popular songs, but unlike Forgotify, you’ll choose which band you want to hear.

The Long Tail gives users a list of 50 songs that have been played the least on Spotify from any artist or group. You just have to type in the name of the singer and a playlist will appear. An excellent app for getting to know the guts of your favorite artists.