Home Software Reviews Questland review: depth and user-friendliness at the service of RPGs 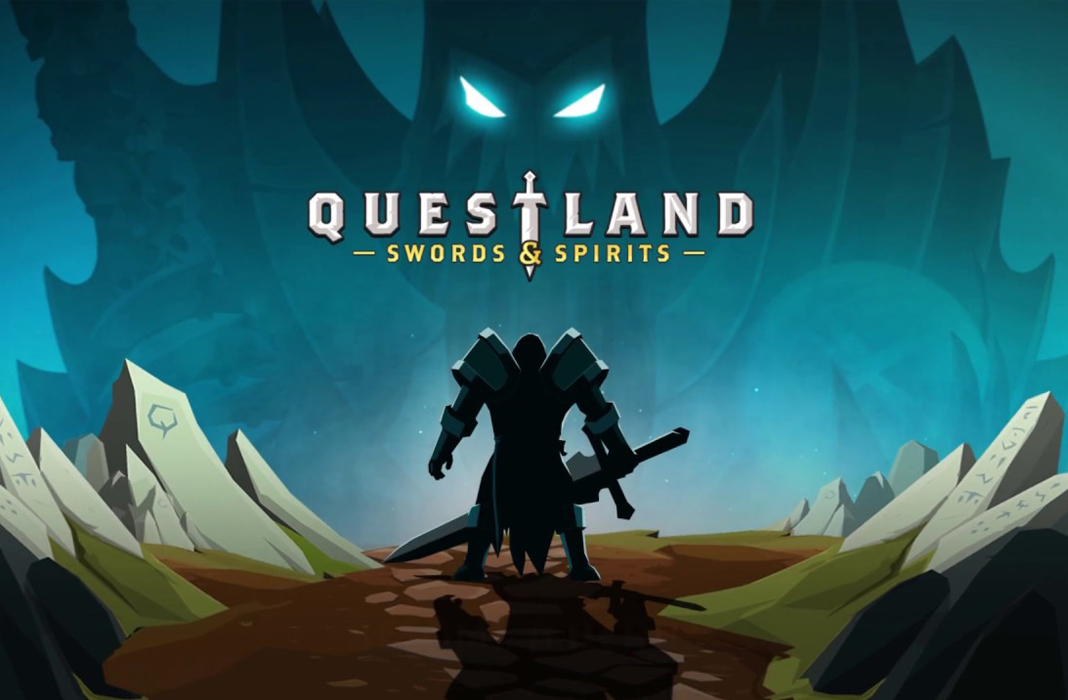 Is it possible to satisfy both RPG fans and a casual audience —that is, regulars of mobile video games? Gamesture seems to have done it with Questland, a role-playing adventure that combines characters and weapon customization typical of RPGs and a surprisingly simple gameplay.


With its first-person view, at first sight, Questland may seem like a pupil of the first RPGs that succeeded on PC screens, like the iconic Eye of the Beholder. Once the player has chosen the gender and appearance of their character, with the help of a very complete editor, they will participate in several campaigns in which they will forge their destiny, as well as optimize their equipment, after fighting against fantastic creatures. From giant spiders to living skeletons, knights, soldiers and, of course, colossal final bosses, who will fight hiding behind their lieutenants. 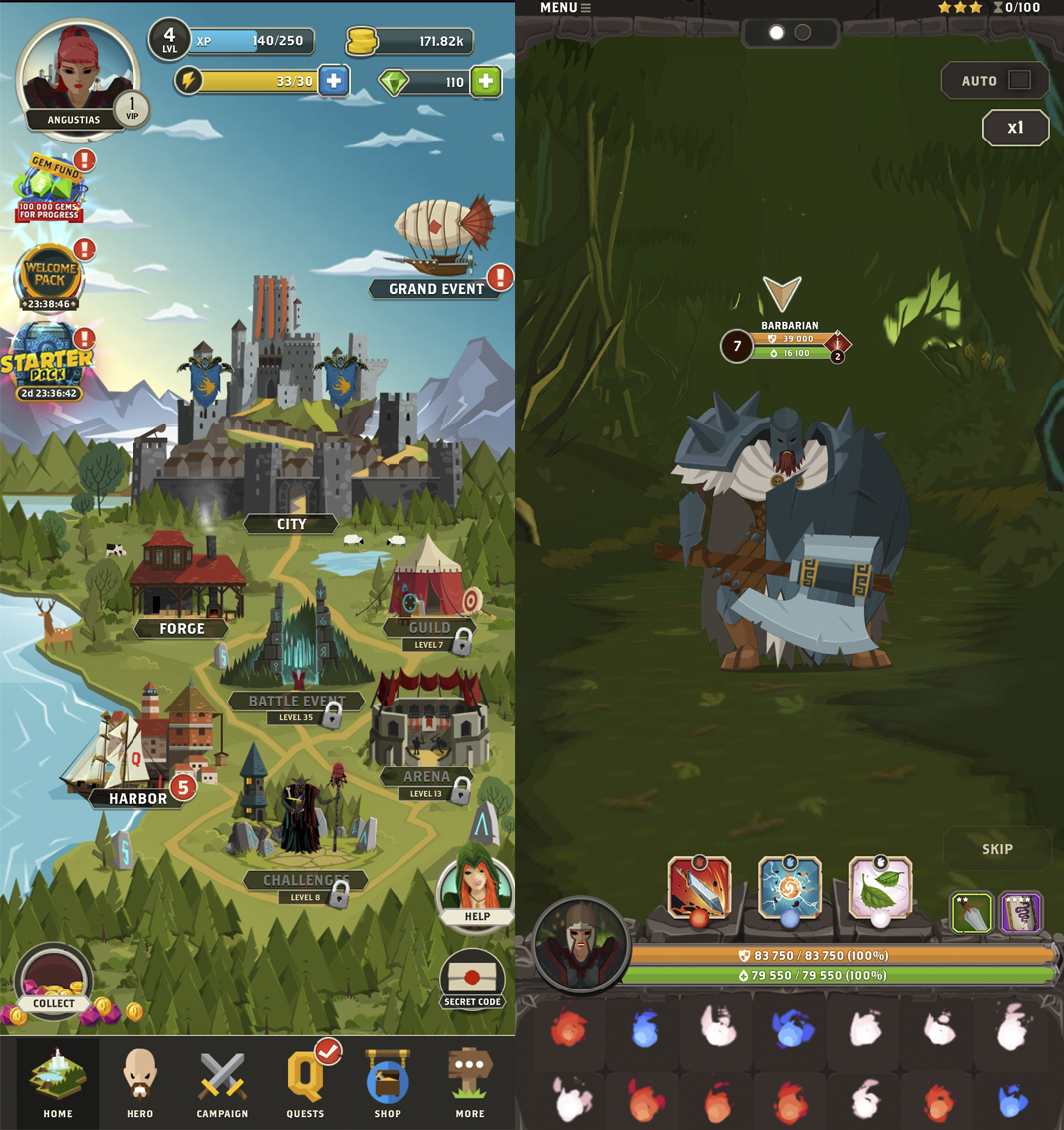 Questland battles as a sort of puzzle

The great challenge posed by mobile RPGs is that, in order to avoid scaring off the casual audience, which is still the largest consumer on mobile devices, they must keep the gameplay as simple as possible so as not to fill the screen with commands or stun the audience in the middle of combat with a succession of menus and submenus. Questland solves this by turning the combat mechanics into a sort of puzzle.

While 3/4 of the screen shows the scenery and the enemies facing you, the lower end is filled with a series of colored tiles that you must match to unleash spells and attacks. And all in a very simple way: by matching together two tiles, you’ll execute an action that will have a specific effect, depending on the tile’s color. 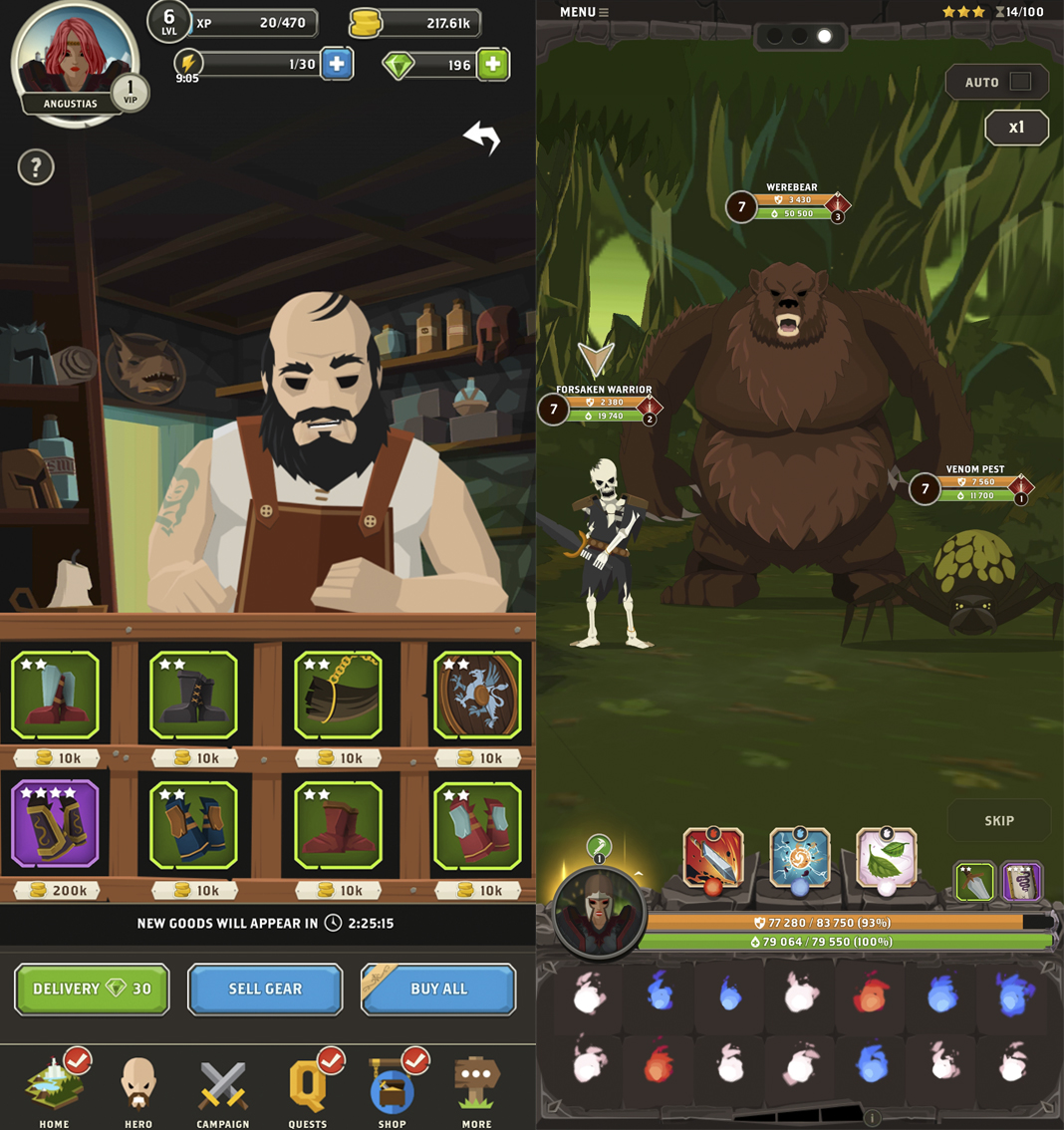 Attacks determined by the tile’s color

As the tiles vanish, new ones will appear on the far right of the screen. Moreover, sometimes you will have the chance to draw a diagonal on four identical tiles, which will unleash a colossal attack, capable of sweeping enemies off the screen or leaving the boss of the day shivering.

In order to be able to match four identical tiles, you’ll have to clear off tiles of other colors, either by means of simple attacks (clicking on a single tile) or in pairs. Depending on the tile color, you will unleash fire spells, electric attacks or healing spells. 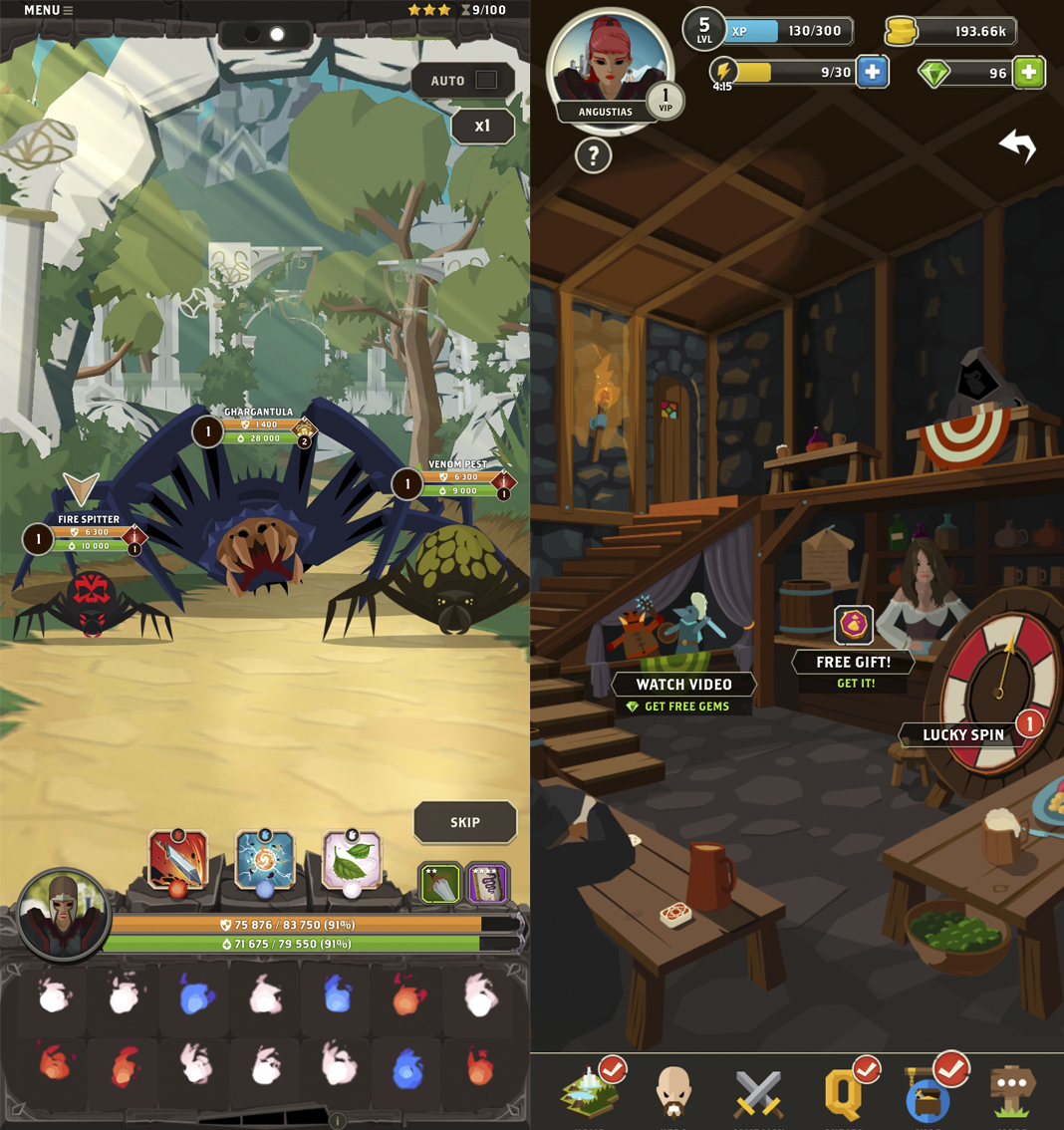 And as if that were not enough, Questland also lets you automate the whole gameplay and even double the speed of combat, leaving the fight in the hands of the AI so that all you have to do is manage all the equipment and items that you have earned in each battle at the end of each adventure.

As in any self-respecting RPG, the game allows you to upgrade or replace all of your hero/heroine’s equipment: helmet, armor, gloves, boots, spells and, of course, weapons. Each element will show its own statistics. Of course, you can also buy new upgrades with real money —although Questland is totally free and can be perfectly enjoyed without spending a euro. 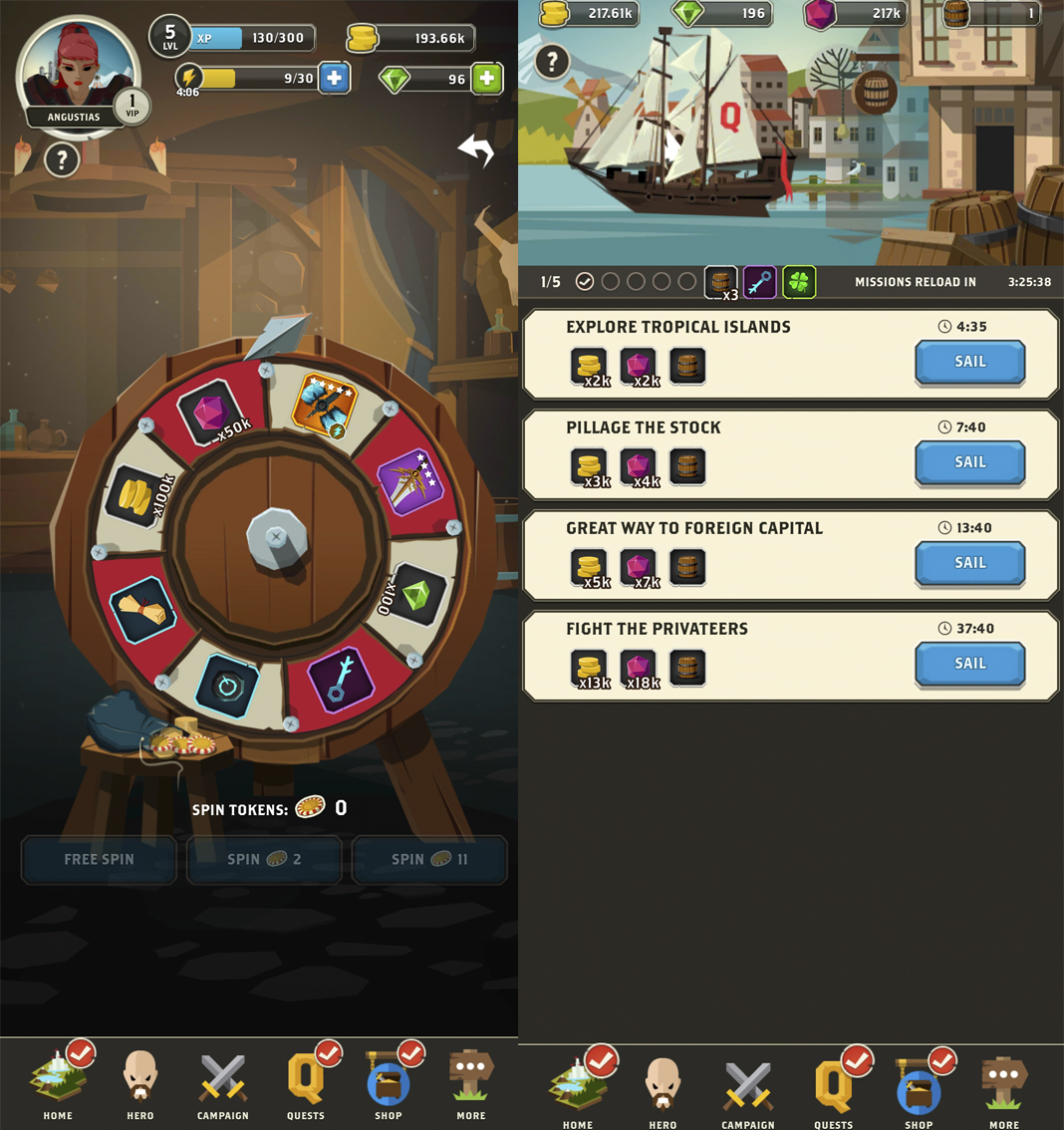 You will be able to send ships from the port in search of resources and items while completing challenges and quests, visiting different locations, such as the tavern (roulette included), and even defying other players in online PvP combat or joining a guild.

Questland offers short games, which you can enjoy single-handedly, but at the same time invites you to be part of a community and lore that you’ll find surprisingly deep. Create your own hero or heroine and make history in the world of Valia. Your greatest adventure is about to begin…