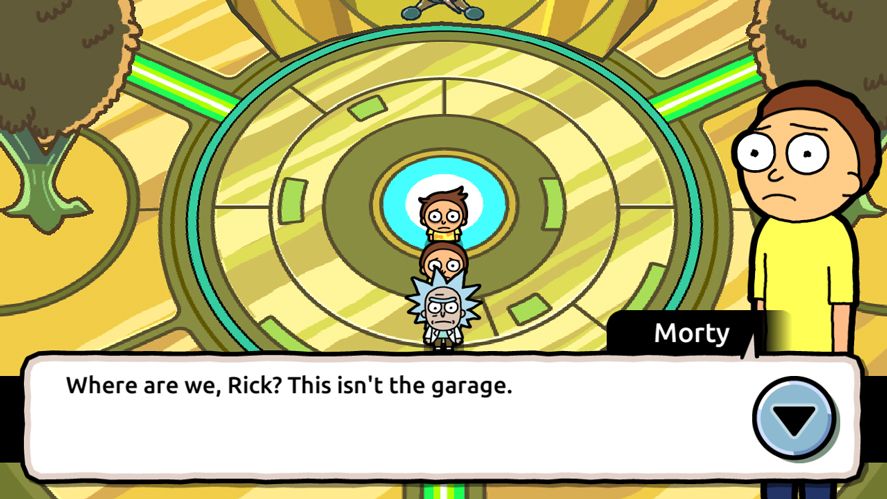 Rick and Morty is one of the most successful adult cartoons on Adult Swim in the last few years. Its sense of humor, and overall style have reached critical acclaim and are often highlighted as one of the best new media productions within its genre. Thankfully, the show’s influence has widened its scope to include video games, and we’re all the better for it. Pocket Mortys is a freakishly good parody of Pokemon where adventure is the name of the game. Originally created as a TV series it warped into a would-be homage to ‘Back to the Future.’ Episodes were initially built upon a very similar geist to the full length feature where a mad-scientist and his grandson are the heroes in an unending slew of adventures across the space-time continuum. Eventually the spin-off took onto its own to become an amalgam of originality, bizarrism and dark humor. Pocket Mortys follows along in the same light and is clearly a satire of the renowned Nintendo title. Moreover, the name in itself is an ouvert tribute to the Pokemon’s original title “Pocket Monsters.”

The main objective in Pocket Mortys is to try to capture all the different ‘Mortys’ across parallel universes. You’ll swoop in from portal to portal arriving to explore different worlds where you can do anything from: face off against other ‘trainers’ (wink, wink), collect lost Mortys that have been wounded in battle, buy and sell objects, etc. Yes, we’re still talking about the same game, and not about the other one, you know, that one where you have to catch ’em all and all that. Combat management is simple. Turn-based, that’s it. Here your Mortys use a variety of different moves and skills to fight for victory. Gameplay is based on typical rock-paper-scissors style, where each of the Mortys belongs to a given category. It’s not exactly just a crummy version of Pokemon, but that’s not far from its original intent. In Pocket Mortys, you’ll have over 70 different Mortys to capture, each of them with their own absurd and genius features. You can train, mix and combine and even evolve your own Mortys. Download, and you’re in for a pleasant surprise with that one. In general, the game’s overall look and feel are awesome. Perfectly embodying and capturing the essence of the TV show is what this is all about, and you’ll find yourself smiling more often than not. Fans of this underground hit will delight in the multiple references to characters like Mr. Meeseeks. In short, this game is a really fun title and the fact that its voiceovers are the original cast from the show is cherry. It’s hard not to fall hard for this masterpiece by Justin Royland and Dan Harmon. Wubalubadubdub!