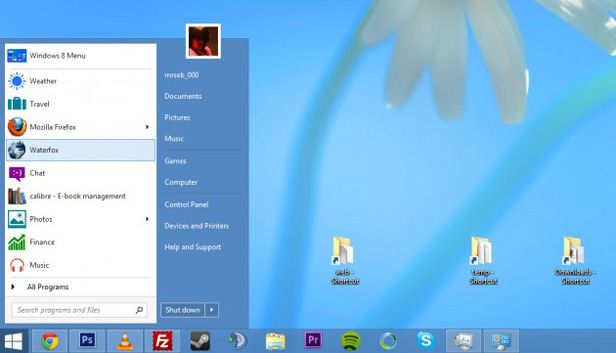 Microsoft has confirmed the rumors about the changes coming to Windows 8.1 “Blue.” The most noteworthy of which is the return of the Start button to the desktop. The main improvements that will be implemented in the new version of Windows 8 mostly focus on the appearance and design, in addition to bringing windows back to the Modern UI environment, and the system will experience a greater focus on cloud computing. The release date is still yet to be confirmed, but towards the end of June the beta version will be made available to the public.

The new features on the Windows Blue update will make it easier to access the basic settings again because the Start button will be permanently brought back to the bottom left part of the desktop. And, you will be able to boot directly to the desktop without having to go through the Metro home screen first.

Microsoft has listened to its users, and the Start button will be brought back to the desktop on Windows 8.1, but it will be different than previous versions. The Start button will have the Windows logo, and will appear on the Modern UI interface as hidden until you hover over the bottom left corner, but can be configured so it doesn’t appear on the taskbar for those who have become used to the new setting. The multiple window feature will be brought back in conjunction with the Modern UI design while achieving much more practical multitasking. When working with several program at once, or several open apps, you can view them all on the screen at the same time at a 50:50 ratio, which can change to a 60:40 ratio to make the one you are using standout, and you will be able to completely customize the size. Also, each app will be able to have several windows.

Another new feature of the Modern UI is that it can have the same background as the desktop to make transitions more fluid, and the “All apps” section will be improved so it filters them by name, date, or category.

The Cloud: Skydrive and Internet Explorer 11

The new Windows 8 update will come equipped with Internet Explorer 11 which will improve search results, have no limit to the number of open tabs, which will be able to be synced with all your other devices and Windows Phone.

The Windows Blue search feature will be a strong point for the new version. The Charm bar will have a more global reach, and will be able to search information from files, apps, the web, and SkyDrive using Bing, which will also be the default search engine, and the only one included in Windows 8.1, leaving all the other search engines out of the mix.

SkyDrive will also have a greater role as it is integrated into the File Explorer and Windows 8.1 apps. Your settings, apps, and history will be stored on SkyDrive with an engine that syncs the least amount of information necessary for everything stored in the cloud which is downloaded as you open files.