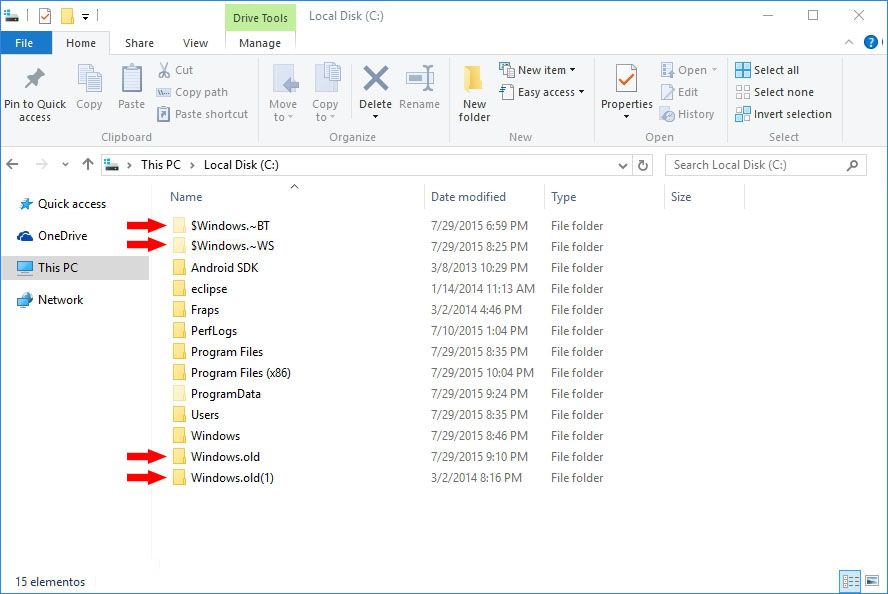 Now that Windows 10 is here – and as usual after the release of a new operating system – we’re still fiddling around to figure out what can be done with it. We’ve already talked till we were blue in the face about Cortana, the Edge browser, and the new Start menu, so we’re going to avoid repeating ourselves and focus here on things to do after installing the Windows 10 update to calibrate it with the rest of your system.

If you’ve had any problems installing the OS and have tried several methods before managing to make it work, it’s possible that you’ve got a few installation files still hanging around, specifically in the folders $Windows.~BT and $Windows.~WS created at the root of your hard drive. You can get rid of all of their contents, and likewise the Windows.old folders. The latter are simply backups of the previous version of the operating system and, as Windows 10 can’t be uninstalled, you can toss those as well. In addition, if you’ve used several builds of the operating system through the Windows Insider program, you can get rid of a good bit more rubbish via the included Free up space by deleteing unnecesary files tool, where there’s an option called Previous versions of Windows that can free up as much as 20GB.

Disable OneDrive if you don’t use it

On Windows 8/8.1 it was a pain to get rid of OneDrive, but there are so many other cloud file-hosting alternatives out there that it’s quite likely you still don’t use it. Luckily our wishes have been heard and it’s now possible to unlink OneDrive from your system and prevent it from running in the background. To do so, you just right-click on its icon in your desktop notifications bar and go to Settings. There you can untick the box so it doesn’t run on Windows startup and unlink it from your Microsoft account. Swap out the default image viewer

Now when you need to right-click on an image by default it’ll open a new photo tool similar to a smartphone image viewer, with an integrated editor to add filters and elegant transitions when you advance through a gallery. BUT IT’S SO SLOW and if, like me, all you want when you click on an image is for it to immediately appear, this is no good. Luckily, in Settings > System > Default Apps you can restore the inveterate Microsoft Photo Viewer. Your other option is to right-click, then click Open with > Choose another app and select your preferred one from there. The unification of desktop and Metro applications is finally a reality, meaning, for example, you’ll no longer have two calculator applications installed at the same time. Nevertheless, it’s quite likely that you’re not going to get much use out of many of the default features, such as the news blocks, for example. To manage them you just have to open the Start menu, click All Apps, and check out everything that’s installed by default. To get rid of anything just right-click on it and choose Uninstall. Link up your OS with your smartphone

Windows and your mobile operating system (Android and iOS; we already know this is not the case with Windows Phone) have always been considered two separate worlds, which doesn’t make much sense during these times of interconnection and unification of services. Now that we’ve got Cortana to get us halfway there, it might be a good idea to bring in your Google account so you can, for a start, sync your contacts book to Windows. To do so, use the Contacts tool to hide the list from your ancient Hotmail/Outlook account and set your Gmail address book as your default one using the wizard. This will make it possible to access your contacts’ info right from your search bar. The next step is to embrace some of Microsoft’s multiplatform apps for Android, like OneNote, Office, Skype, or Outlook. In fact, Cortana can already be used on Android, although the app is still in an early beta phase.