Home Tops and Comparisons WhatsApp wins on users, LINE on revenues, and Facebook on growth 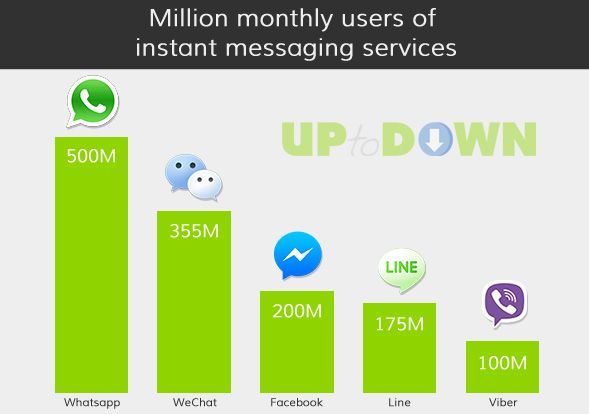 The battle in the mobile instant messaging ecosystem is fiercer than ever. The CEOs of each company never cease in bombarding us with new data on customer loyalty and economic revenues, but the story focuses on four main contenders: WhatsApp boasts the most users, LINE the highest revenues, and Facebook Messenger the highest growth in recent times. Meanwhile, WeChat is also positioned as one of the most powerful thanks to its hegemony in the Chinese market. WhatsApp: The most users

Jan Koum, the company’s CEO, has recently announced that WhatsApp topped 500 million active monthly users—an absurd number backed up by the 700 million photos and 100 million videos shared daily. Its international expansion strategy has managed to win in emerging markets as important as India, Mexico, Russia, and Brazil. And the cleverest know that to triumph in the mobile market you have to specialize for each localization.

Every once in a while a new rival appears on the IM market with promises galore and a strong uptick in growth during its first weeks (did someone say Telegram?), but after the inevitable leveling off, the constant growth of the heavyweights makes it quickly fall by the wayside. The only one able to hold its own is WeChat, which with 355 million users and undisputed leadership in the Chinese market has found itself in second place in terms of international use.

There is an interesting moral to this story, since it turns out that LINE, with its 175 million active monthly users, is the highest-revenue-generating IM service, even though it’s in fourth place with respect to user numbers, after WhatsApp, WeChat, and Facebook Messenger.

The Wall Street Journal recently dished some details on this topic. While WeChat is the most-used service in China, the rest of Asia—Japan, Thailand, Taiwan, and South Korea—belongs to LINE and KakaoTalk. The sticker market has made it a smashing success, not to mention recent developments such as the arrival of VoIP calls from the app to a dozen countries.

The latest arrival on the scene, at least in terms of the hard numbers, has discovered how to reinvent itself recently after its change of strategy and refocus toward the mobile market. The release of Facebook’s financial data for the third quarter of FY 2014 has supplied some relevant details, above all in relation to how the application is used: More than 50% of revenues come from the use of mobile apps. Considering the fact that the firm reported earnings of some 2.5 billion dollars, we’re talking about a lot of money here.

Of course, the really interesting thing is that for the first time usage data has been released for its IM app, revealing that it’s used by 200 million people every month, leaving it in third place in the market, beneath only WhatsApp and WeChat. This growth is mainly owed to the comprehensive revamp of the IM service after it completely separated from the official Facebook app.