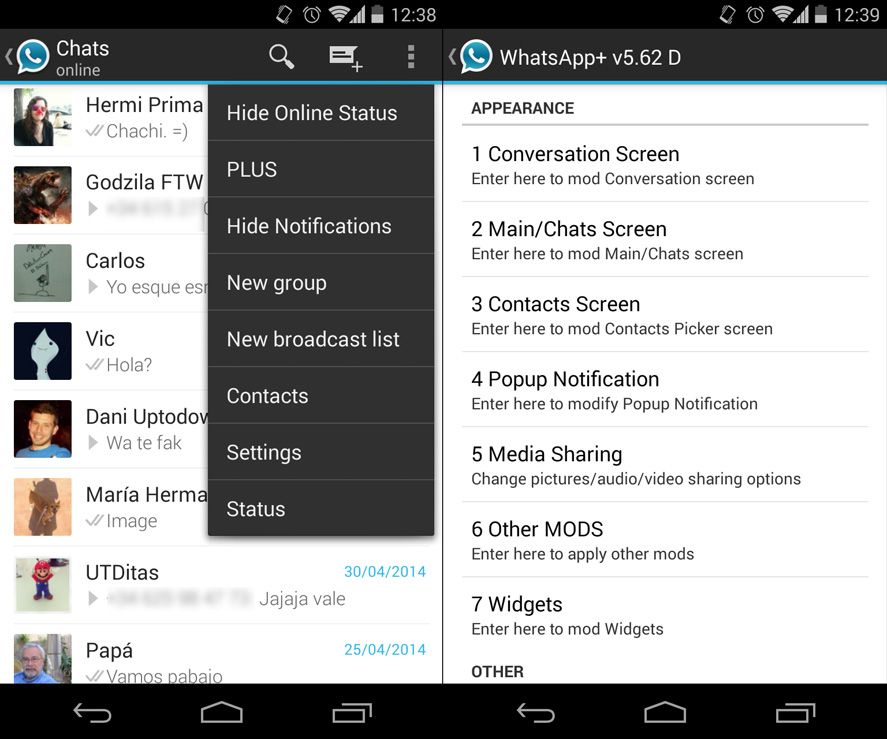 Many users already have an expanded edition of WhatsApp not found on Google Play that has the well-known balloon and phone icon colored blue. This is WhatsApp Plus, an unofficial alternative version that adds a host of tweaks and improvements that the original app doesn’t have, such as the option to add themes, hide your status, or use extra emoticons.

In many respects this program brings to mind the philosophy of Messenger Plus, the add-on for the Microsoft messaging service that includes interesting features still unavailable on the official tool. In this case, though, WhatsApp Plus is not a complement that you install “on top” of the original, meaning you have to uninstall WhatsApp first, although you’ll still be able to keep all your contacts and conversations. You can also return to the original program if desired without any type of restriction. Although WhatsApp Plus’s interface and system are already fast, intuitive, and in many ways better than the original, you can also modify practically any aspect of the app as desired. In fact, it’s possible to access dozens of complete themes that you can download and install from the program itself. (You can also delete them.)

Beyond the themes, you can make specific changes in the animations, the level of transparency of each window, the look and duration of the notifications, the shape of the app icon, and the type of image associated with each contact and group. You can transform it into practically whatever you want. The visual component is just the tip of the iceberg, with the real potential of this modified version lying in the extra features and tweaks. First of all, it includes more than a hundred new emoticons of all sorts, including those used by Hangouts. The only inconvenient thing is that only people who also use WhatsApp Plus can see them.

Another of its strong points is the option to cancel the compression when you send multimedia files, meaning you can send videos and photos at their original resolution. You’ll also have the option to send large-size files or even limit their maximum size in MB.

Although WhatsApp has added the option to hide the last connection time, Plus goes a step further, allowing you to completely hide your connection status so your contacts will never know if you’ve opened the app or not. But is it secure?

WhatsApp Plus is not an official tool, but that doesn’t mean it’s not totally legal. It’s developed via reverse engineering by the Alicante developer Rafalense, who has not received any notifications or complaints from WhatsApp, only a petition to remove the APK from the XDA-Developers forums.

With regards to security, the app has had no problems to date with regard to account deletion or security breaches, and is governed by the same protocols and servers of the original tool. Until we’re told otherwise, WhatsApp Plus is as secure (or insecure) as the official app.

New version of WhatsApp Plus gets around the ban

WhatsApp Plus shuts down for good