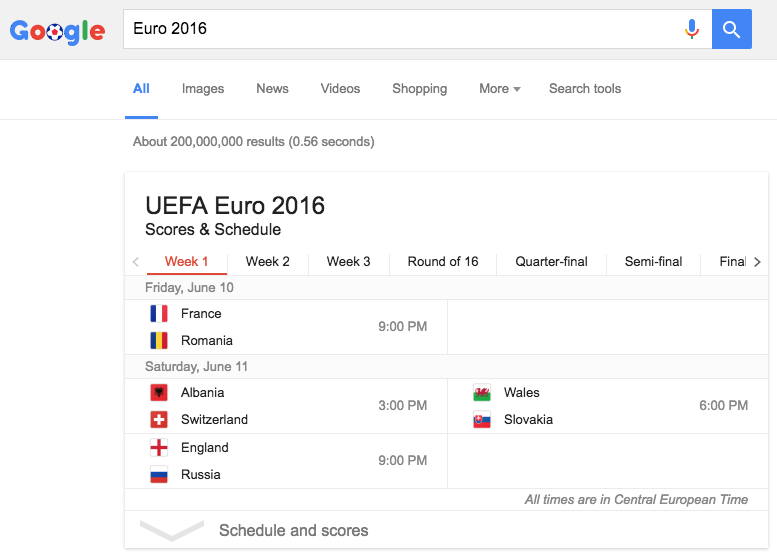 The UEFA Europa League 2016 is right around the corner. Next Friday, June 10th, is the first match – between France and Romania – with the rest of competition extending over 30 days until the final. The Copa America has also just started and will carry on throughout the month of June. There are lots of ways to keep up with both cups, but here we’re going to focus on Android apps to enjoy the UEFA EURO 2016 and the Copa America. Your first recourse for info obviously has to be the official channels. Both the EURO 2016 and the Copa America have their own Android apps where you can keep up with fixtures and results, as well as all sorts of extra info about to the competition.

In the UEFA EURO 2016 Official App you can check everything related to the cup, including news on the championship and detailed info on each location or participating team. But the app’s real potential lies in the possibility of following specific players or teams to get notifications about them on your device.

The Copa America Centenario 2016 app, for its part, does the same thing for that competition. Just open it and it’ll ask you what your fave team in the cup is so it can customize the info it displays. Rather humbler than the previous app, this one shows – on top of the standard summary of results and fixtures – social content, related media from the official Twitter feed, and video highlights of each match.

How to watch games on your smartphone

Although there are endless unofficial apps to stream the games, there are also loads of TV channels with open match broadcasts. THIS LIST shows the TV channels with the EURO 2016 broadcast rights in each country. In lots of cases you can access live streams right from the channels’ Android apps. Here in Spain, for instance, Mediaset is broadcasting all matches with the Spanish team as well as the last rounds of the finals. You can follow all of this through their MiTele app.

Same deal for the Copa America. HERE is the list of TV channels with the broadcast rights. In Mexico, for example, you can follow lots of matches through the Televisa app.

Or you can just turn to one of the mentioned compendiums of online TV broadcasts. One of the most popular has an explanatory-enough name: Fútbol Gratis Online (Free Football Online). Or if you want to go right to the broadcaster and skip the intermediary you can search Ustream.

Ah, and we mustn’t forget to mention one of best sources of soccer info out there. Resultados de Fútbol (Football Results) doesn’t offer live broadcasts, but it does have super-comprehensive, real-time info on each match and an unhealthy passion for detail. If you can’t watch a live match, you can always check how the game is developing from the official app.

It’s more than obvious that Twitter is a major communication line for commenting live sporting events. With that in mind, Twitter activated a collection of special emojis for Euro2016. They’ll appear next to the hashtags listed below: As always, this search engine offers additional information in its search header. When writing “Euro2016”, “Eurocopa”, or “Copa America,” you’ll find a whole calendar with match times as well as running scores and final results for each competition. This isn’t the first time we’ve mentioned MSQRD, a camera app where the main appeal is adding decorations and huge sticker masks that adapt to your face in real time. For the occasion, they’ve come out with a collection of national flags for each major team in Copa America. As is to be expected, shortly they’ll also be out with Euro2016 flags. Digital fandom for you hardcore hooligans.