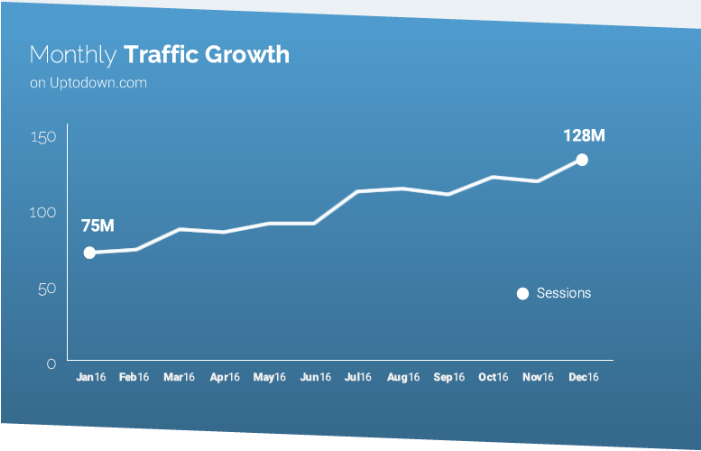 There’s life beyond Google Play, my friends. In fact, it was precisely in that bubbling cauldron that Uptodown was brewed, betting in recent years for a distribution model that might sound far-fetched given how monopolized the Android app market is. Just in 2016, 1.2 billion Uptodown users have downloaded 2 billion apps for Android alone. The numbers below illustrate some of the trends and hits on Android over the last year. But where in the world can such striking growth, most of it natural traffic, come from in the absence of disproportionate investments in ads? Easy. From taking firm root in emerging markets and betting on geographical regions that appear to be hitting the tech boiling point. Take a look, for instance, at the three countries with the most Android downloads on Uptodown: Brazil, Mexico, and India, respectively. The continental distribution makes the opportunities quite clear, with nearly half the traffic coming from America (579M) followed by Asia (347M), Europe (155M), and Africa (142M). In terms of trends, IM apps remain on top as the most downloaded app type, with WhatsApp Messenger as entrenched as ever at the top (133M) followed by Facebook Messenger (75M). Another look at our list of top downloads makes the value of our independence even clearer: 9 of the top 20 apps are not available on Google Play, among them tools for rooting devices and utilities for doing local downloads of online videos. In terms of the top game downloads, Clash of Clans remains at the forefront for the third year in a row thanks mainly to how fast we get the latest updates published when they come out. That said, new games have appeared in our top lists that serve as benchmarks when looking at spikes in traffic over the year. Pokémon GO drew 7.48 million downloads the day of its release, though we hit the record for downloads – at 8.87 million – this past Christmas Day thanks to all the new smartphones people got as gifts. But info on apps is just the tip of the iceberg in terms of what we can deduce from this data: we can also look at market trends and consumption habits on the most common hardware used to visit Uptodown. By hardware brand, Samsung is the most popular, with 357 million sessions, basically due to the huge brand segmentation with so many different models on the market, its interesting array of low-range devices, and its penetration into emerging markets. We can give even more detail to this discussion on globalization and the growth of new users with little experience of mobile technology if we look at the most popular versions of Android used to access Uptodown. Surprisingly, the number-one spot is occupied 4.4.2 Kit Kat, which rolled out more than three years ago, at 52 million sessions (20 million more than the runner-up). In terms of the most popular browser, the most used is Chrome with 156 million sessions, followed by UC Browser (49 million), and the default Android browser included on old versions of the operating system (44 million).