In the 1990s, there was one specific genre that dominated the arcades: beat ’em up. These classic arcade games immersed us in a world where we could punch and kick every enemy who got in our way. This video game style eventually evolved into the savage 3D hack & slash, but it still maintains a fan base of players who still love wiping the screen clear of all the 2D enemies. We’ve put together a list of the best games from the genre, with this selection of the top 10 beat ’em ups available on Android. 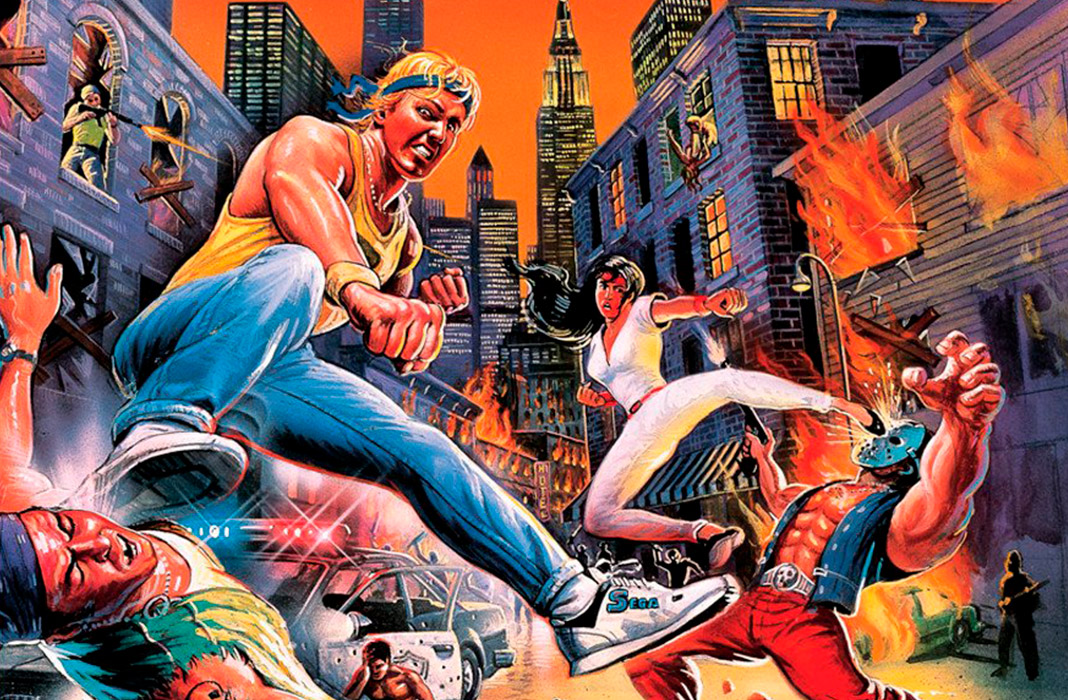 It’s time to use your own Bruce Lee wannabe to clear all the enemies from the screen with the fastest and strongest attacks you can manage. Your eyes are sure to light up with the colorful graphics, although the constant ads do rain on the parade quite a bit, cooling your desire to make it to the end. The special attacks are really something spectacular though, which is probably the best thing about Glory Samurai. [Download] 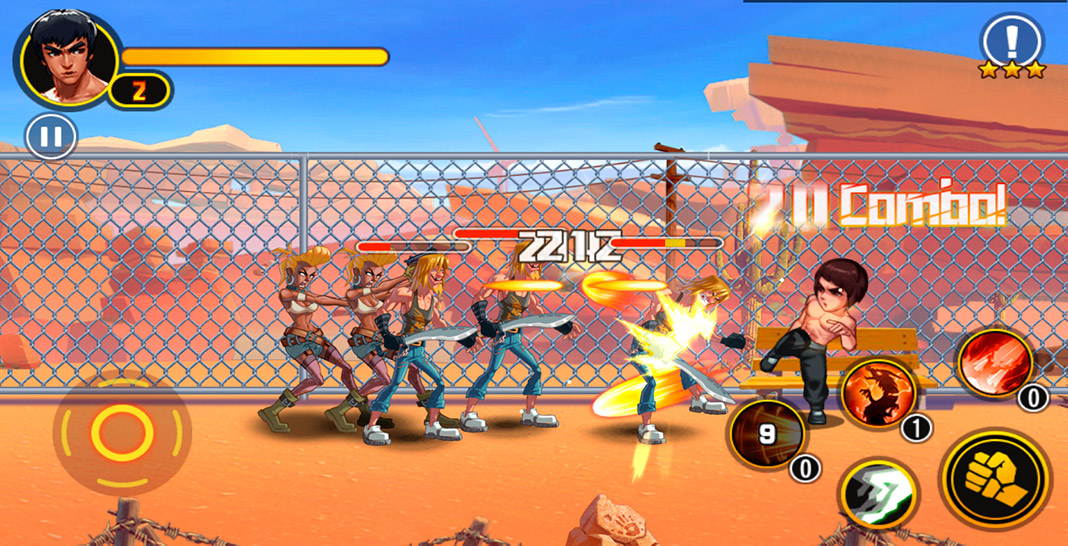 Although beat ’em ups are usually set in urban settings, ChronoBlade, stands out from the rest as it fully immerses us in a universe full of swords and witchcraft. Get ready to be thrilled by spectacular 3D graphics and enormous final bosses. With tons of variety and fun to be had, you get to choose from various character classes with all different abilities. This adds an interesting dimension to the game as it slightly changes how you’ll play each round. [Download]

It’s typical to find beat ’em ups on Android with a simple gameplay, based on manganime licenses. God of Highschool introduces us to a Korean manwa that dishes out a good dose of beat downs, high school characters, Asian folklore, and typical fanservice. It’s especially fun thanks to all the crazy combos you can unleash and the huge ensemble of characters who you can join your team. [Download] 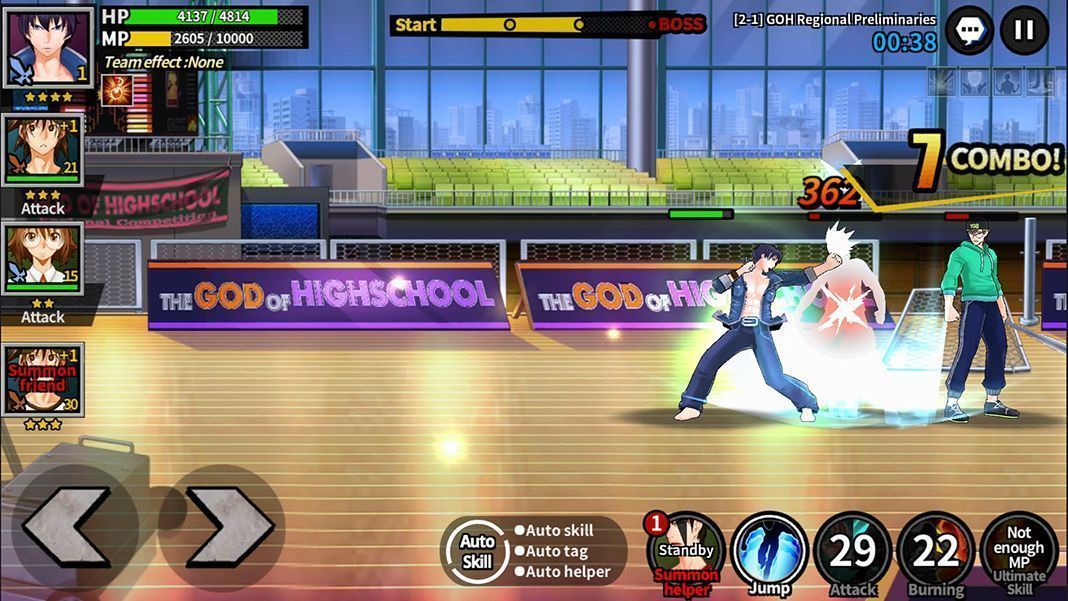 Spectacular would be the word we’d use to describe the graphics in Ultra Fighters. We often end up getting let down with the big names a lot of games boast, but in this case, Ultra Fighters does not disappoint. Here you can expect lots of action and gorgeous graphics that let you carry out all sorts of moves. It’s pretty simple in its development, but at least you have plenty of characters to unlock. [Download] 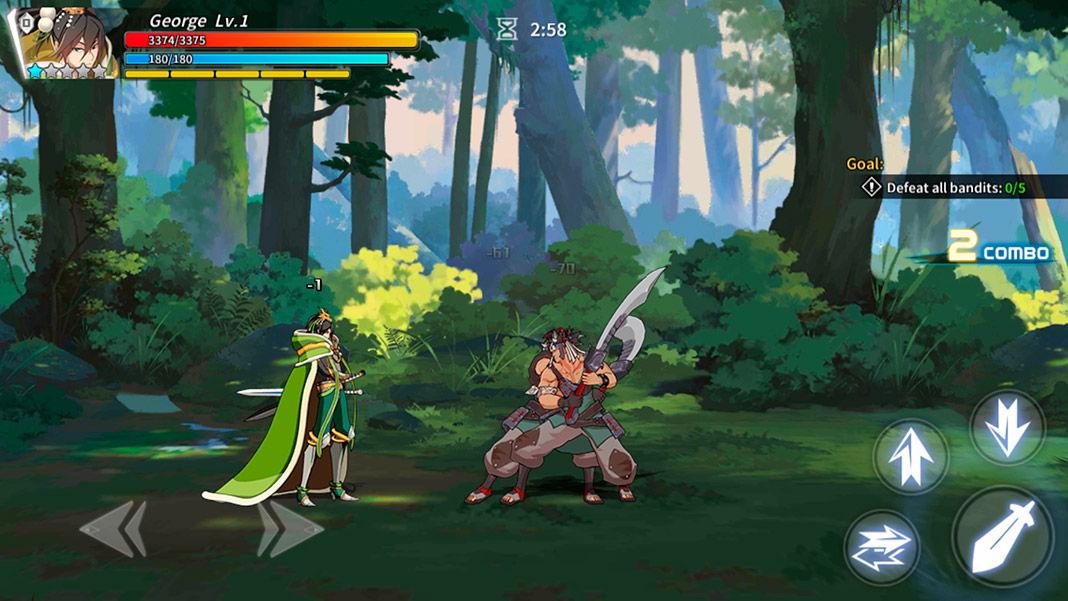 Zankoku na tenshi no you ni, Shounen yo shinwa ni nare… I think you know where we’re going with this, right? This video game from Evangelion puts us right smack dab in the original anime: you advance through storylines from the series while fighting against all sorts of angels who cross your path. In addition to the hand-to-hand combat, you also get to level up your EVAs, collect objects, and other typical options for online Android games. While it’s not available in western languages yet, it’s hard not to enjoy a game like this one. [Download] 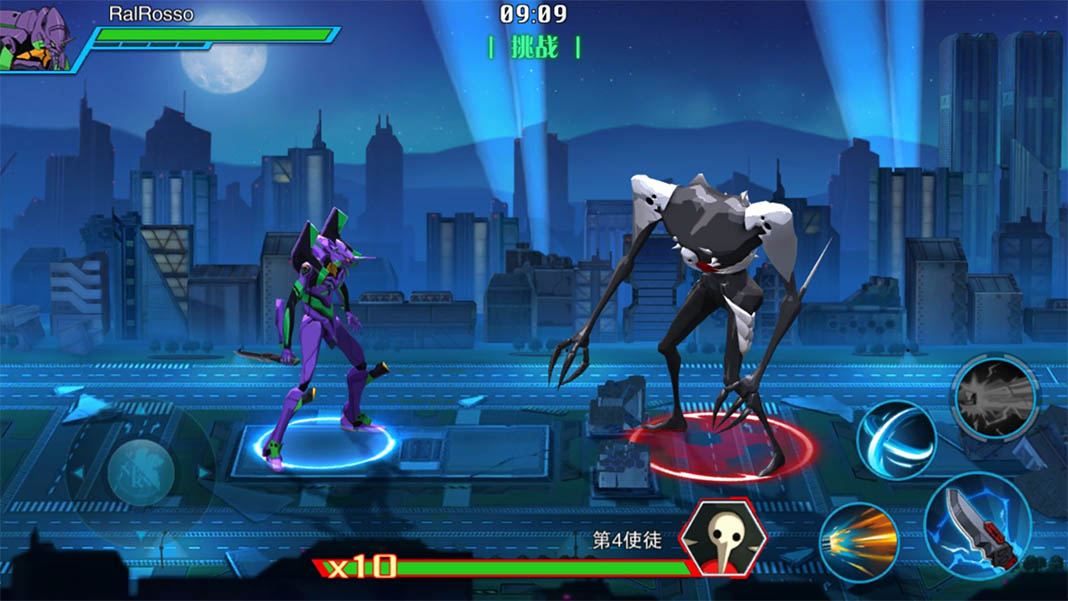 A classic among classics, Hero Fighter X may be somewhat rough around the edges if we compare it to modern-day beat ’em ups, but gameplay-wise, it still reigns king. In the beginning, you can only play in pretty boring phases, but it doesn’t take long before you can start unlocking more entertaining modes. You’ll end up being fascinated by the enormous number of fighting options you have in front of you. It’s probably one of the most complete Android games in terms of playability that exists in this genre. [Download] 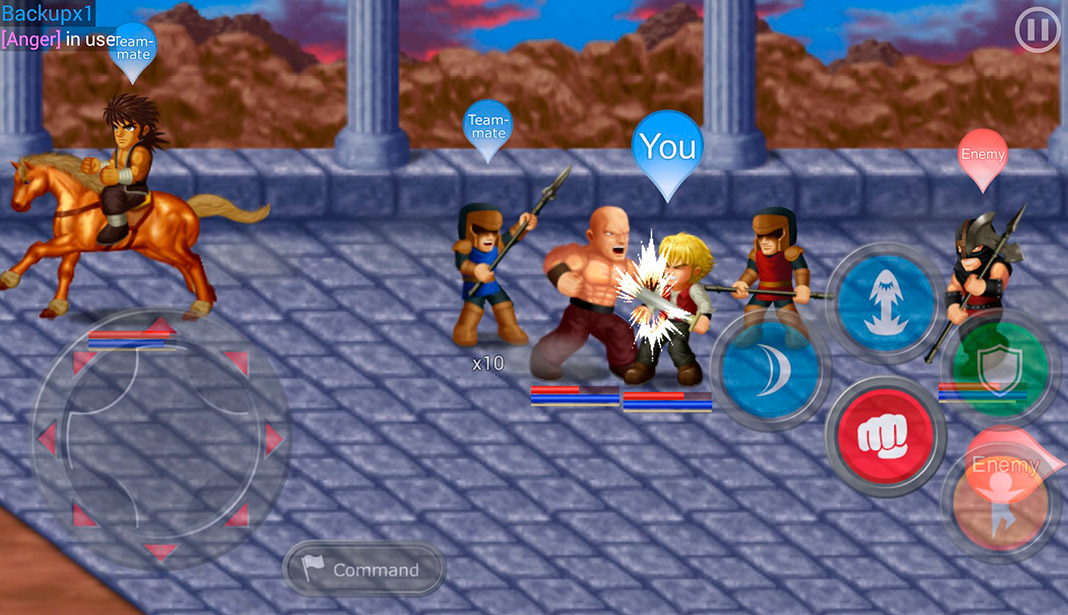 BlazBlue has become a big name in fighting games thanks to being one of the most technical titles that exist. Watching tournaments of any of its many games is always interesting thanks to the fatality of its combos. This installment for Android sets itself apart from the console games a bit with its excellent touchscreen controls and the fact that it offers a story mode where you have to wipe out all the enemies you come across. You won’t want to miss this gem called BlazBlue RR. [Download] 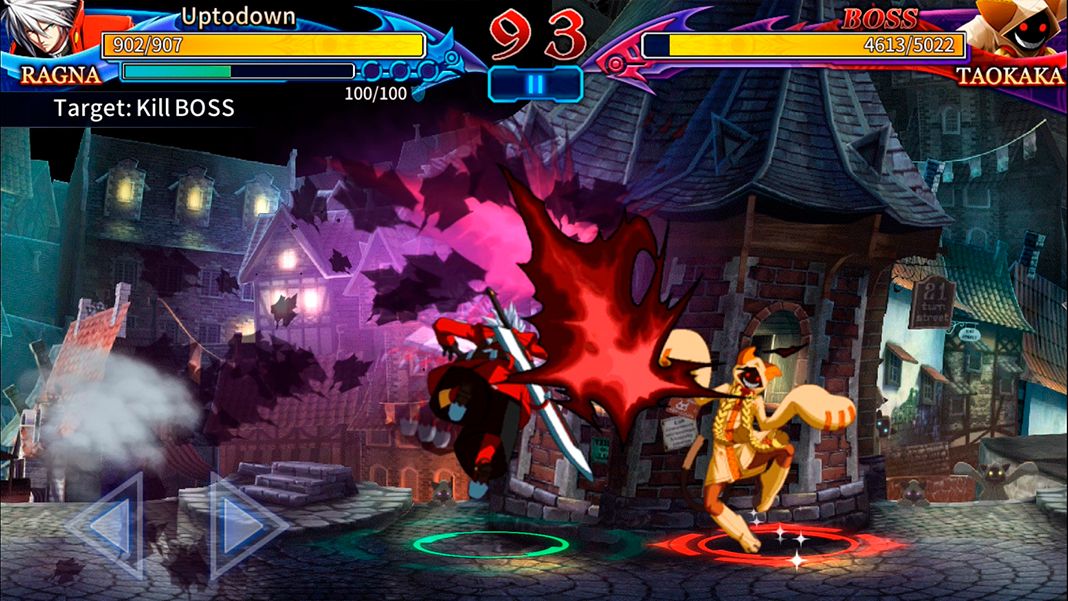 Ancient China serves as a backdrop for Missile Heroes, a great beat ’em up with graphics impressive enough to be envied by all its peers. It doesn’t attempt to reinvent the wheel or anything in terms of gameplay, where you’ll find the typical special moves buttons, but at the very least, it will light up your screen with its pure spectacularness. [Download] 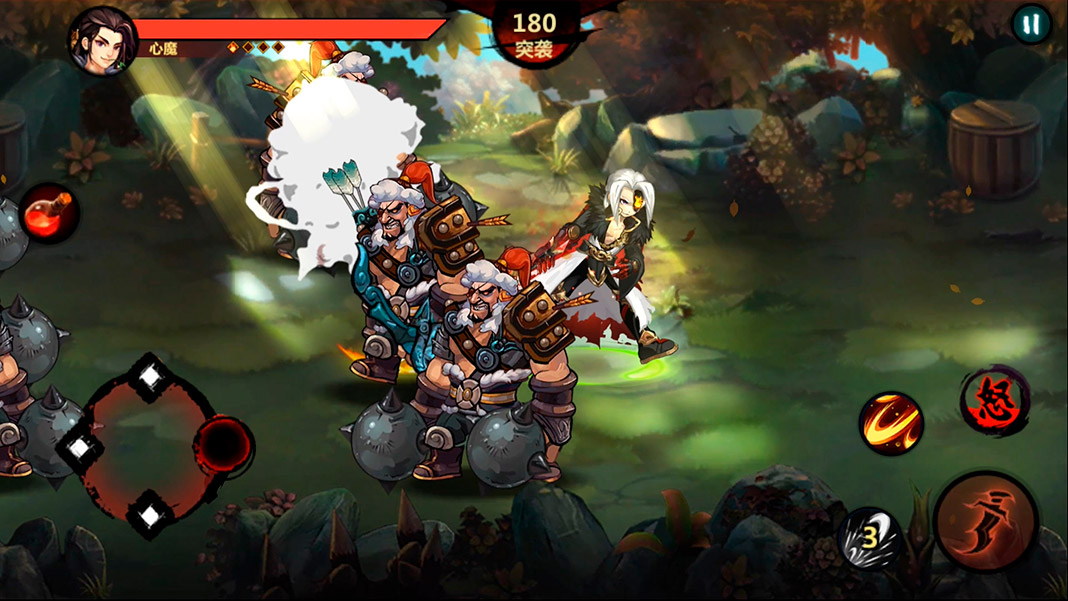 If we had to choose a smartphone version of classics like Double Dragon, Street of Rage, and Final Fight, the clear choice would be Beat Street. Its retro, pixelated graphics and its traditional development have you take down all sorts of anthropomorphic animals who try to get in your way. One interesting point worth mentioning is the fact that you have to unlock movements as you complete screens, so the game becomes more and more complex as you complete the phases. [Download] 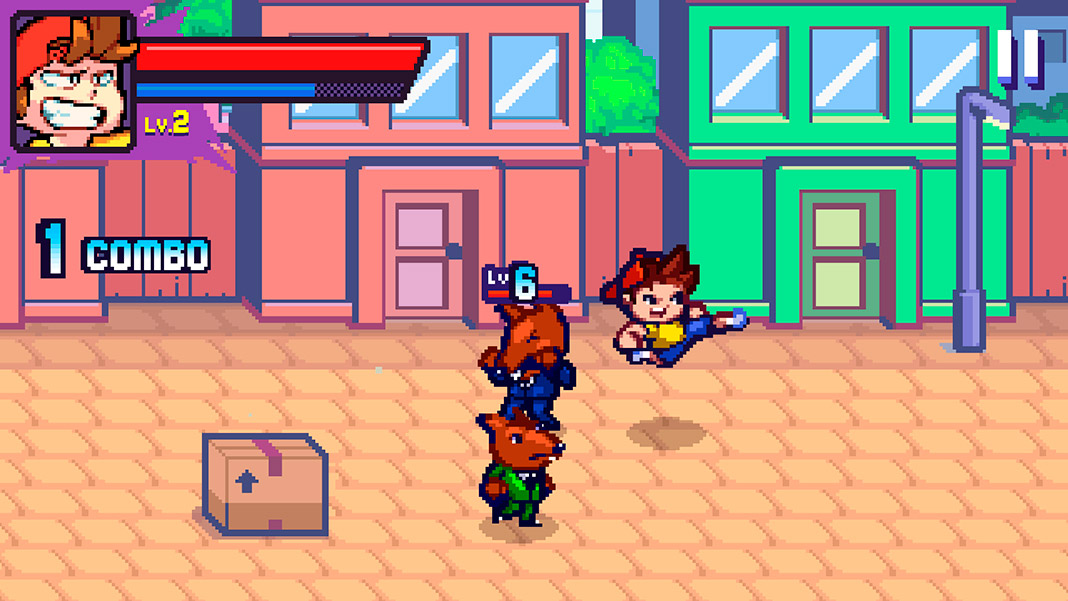 At first glance, Dragon Spear reminds us of Dragon’s Crown, one of the beat ’em ups that’s caused a big stir in recent times. Not only for its simply amazing visuals, but for the excessive details of the characters. Especially the female characters. We’re not huge fans of this design decision, but we do recognize that it’s the norm for many mobile games. Despite all that, Dragon Spear is a great game in terms of gameplay. Its variety of characters and settings remind us of the legendary beat ’em up Dungeons & Dragons. [Download] 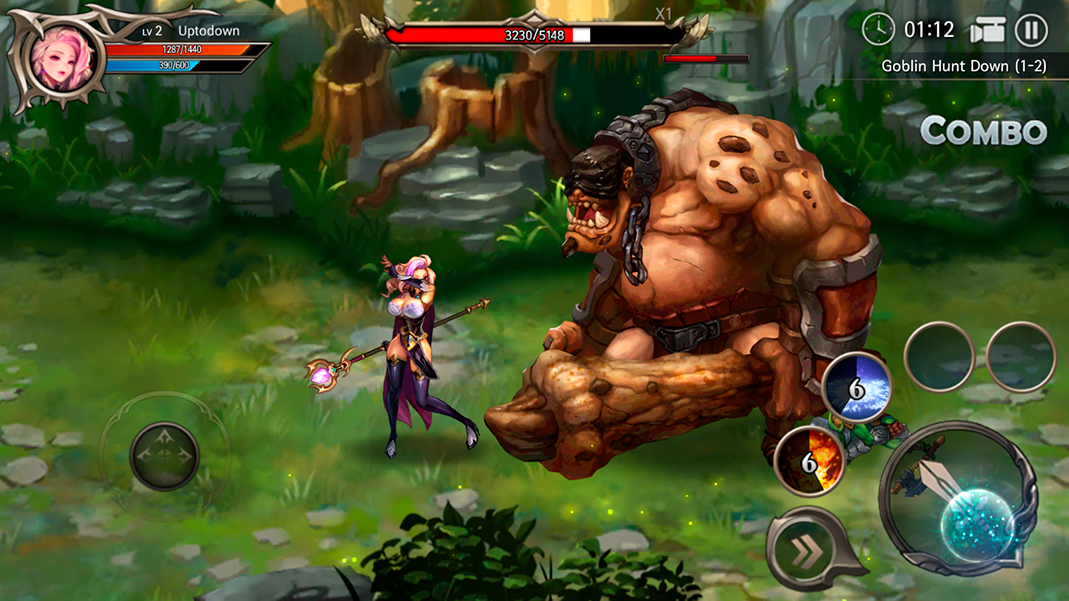 In Naruto: Ultimate Storm, the exciting beat ’em up from Tencent, we will be able to live exciting fights, along with recognizable characters and attacks from the well-known manganime. This means that during fights we will be able to use resources such as Naruto’s Rasengan or Sasuke’s Chidori. Nostalgia is served, and reminiscing upon many epic moments of Kishimoto’s work on our smartphone will be an easy task. [Download] 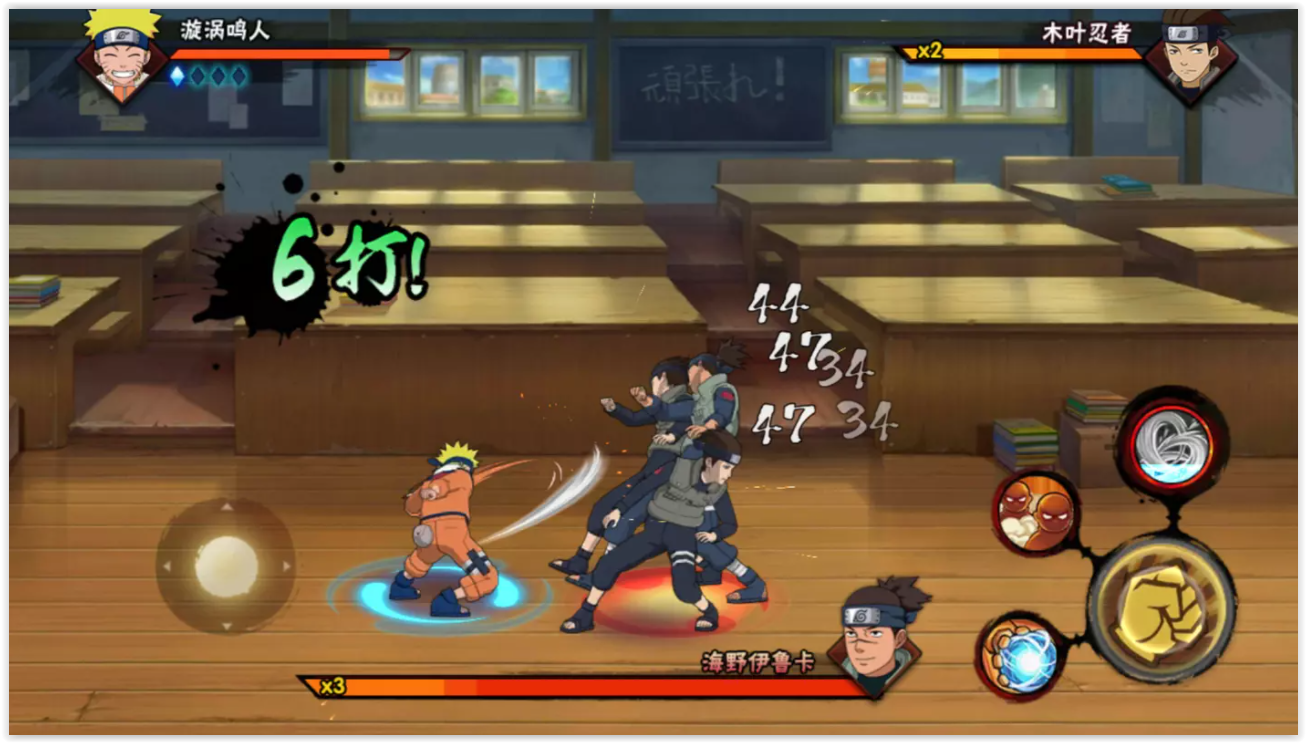 As its name suggests, in Invincible Hero we’ll play a super-strong superhero whose goal is to get rid of all the enemies we are presented with as we level up. This simple beat ’em up’s visuals show a vertical perspective and only two action buttons. Moving from left to right to aim at the characters that appear on screen will be as easy as touching the corresponding arrows. [Download] 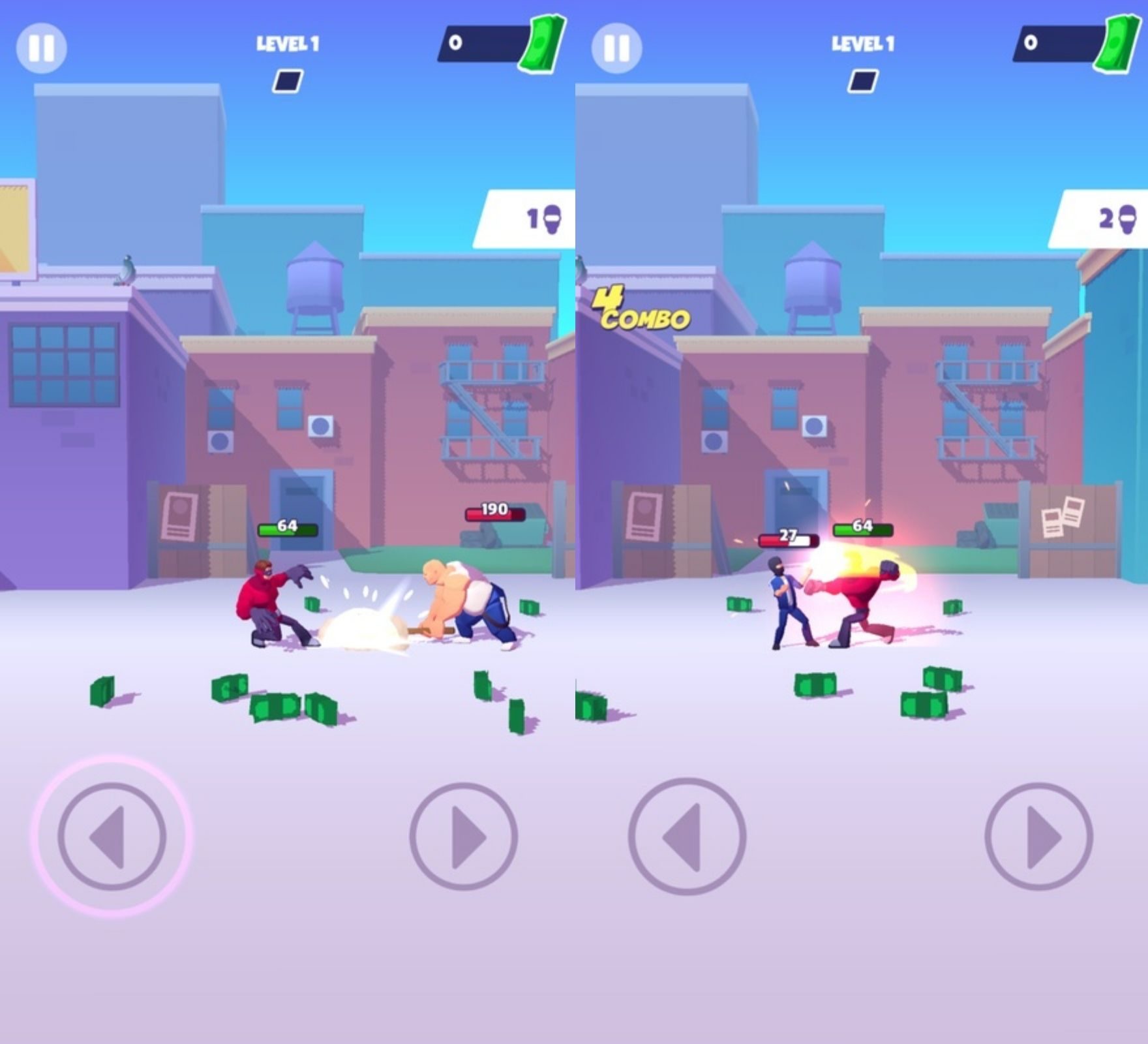 Following the line of vertically oriented beat ’em ups, we find Brawl Quest. In this title we will play different heroes whose goal is to stop the advances of multiple hordes of enemies. The game’s control system is not complicated at all. All we’ll have to do is press on the circular buttons to execute constant attacks. In addition, we will gradually get new characters that will help us to prevent the progression of evil in the world. [Download] 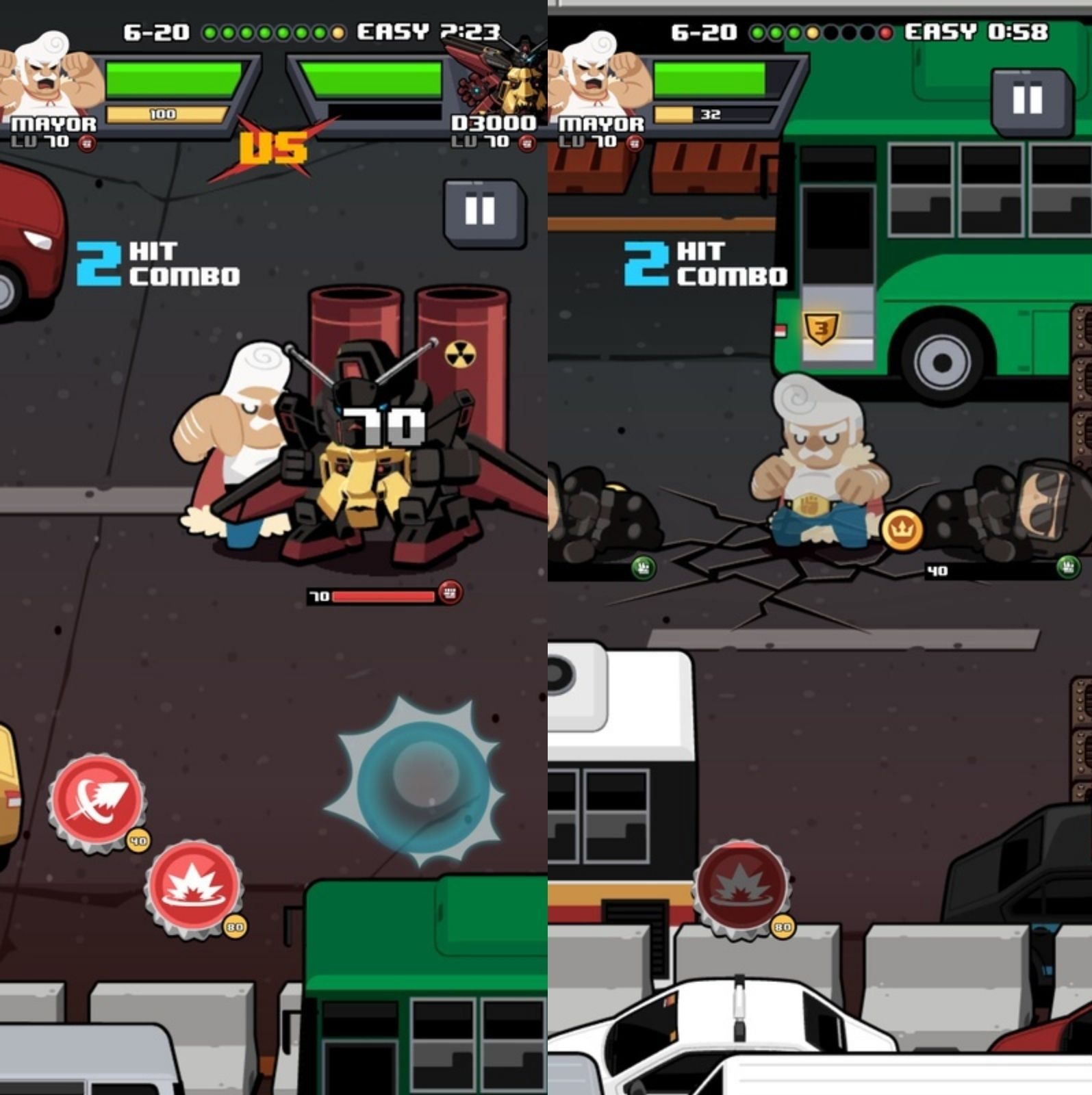 A dog with a human body is ready to bring peace back to its city. This is the premise of WarDogs Red’s Return, a beat ’em up that reminds us of classics of the genre such as Final Fight or Streets of Rage. Through eye-catching visuals and classic controls, in each round we will leverage the strength of this anthropomorphic animal to clear the streets of rivals. [Download]

The King of Fighters ALLSTAR

The King of Fighters saga is one of the best beat ’em up games for Android, and in this case, Netmarble brings us a spectacular title. The characters of KOF are distributed in more than 20 levels to make up an entertaining story mode that mixes narration with action. The King of Fighters ALLSTAR includes a dynamic control system and offers incredible combos that will allow us to fulminate all the rivals that try to stop our advance through the streets. [Download]

Imagine going deep into the jungle with Manny Pacquiao to live exciting adventures. This is the premise behind Fighting Pride, an action-packed beat ’em up in which we will accompany the boxer on his mission to defeat all his rivals. This game also offers practical controls, with a directional joystick on the left side and a couple of action buttons that will allow us to execute hooks and kicks to knock ’em out. [Download] 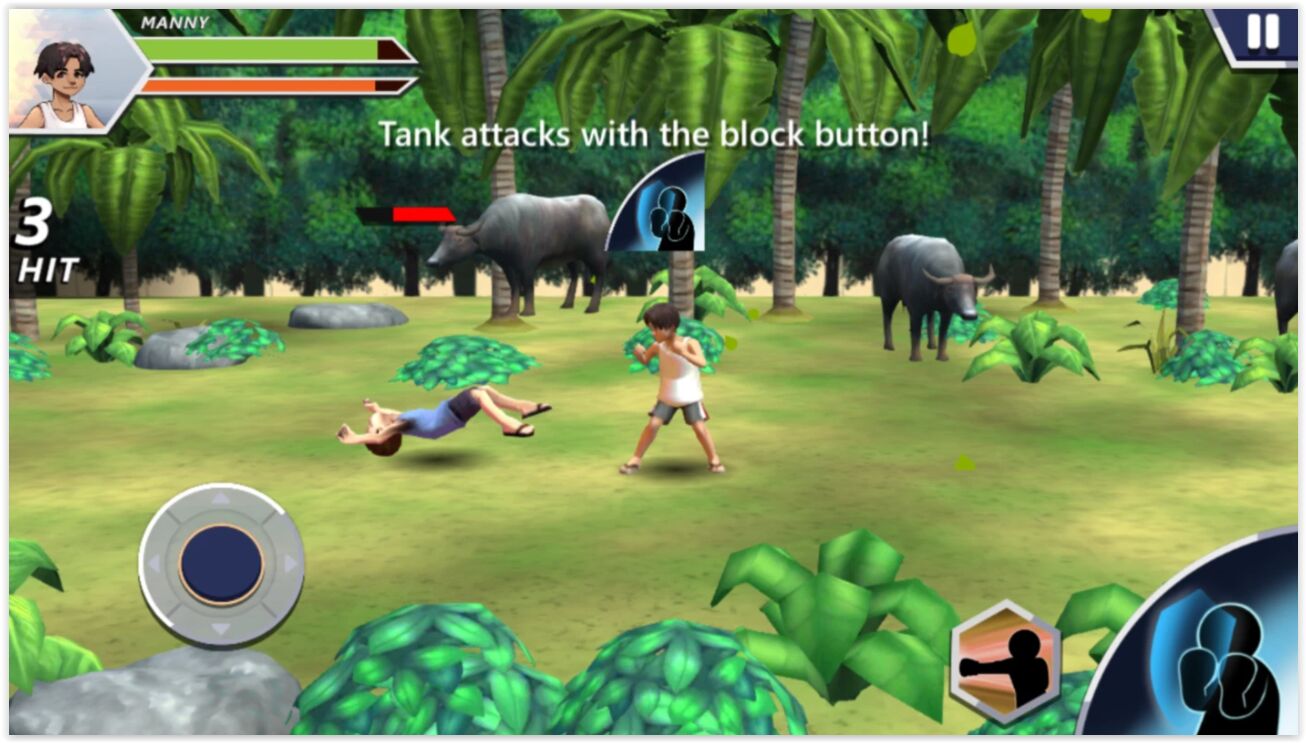