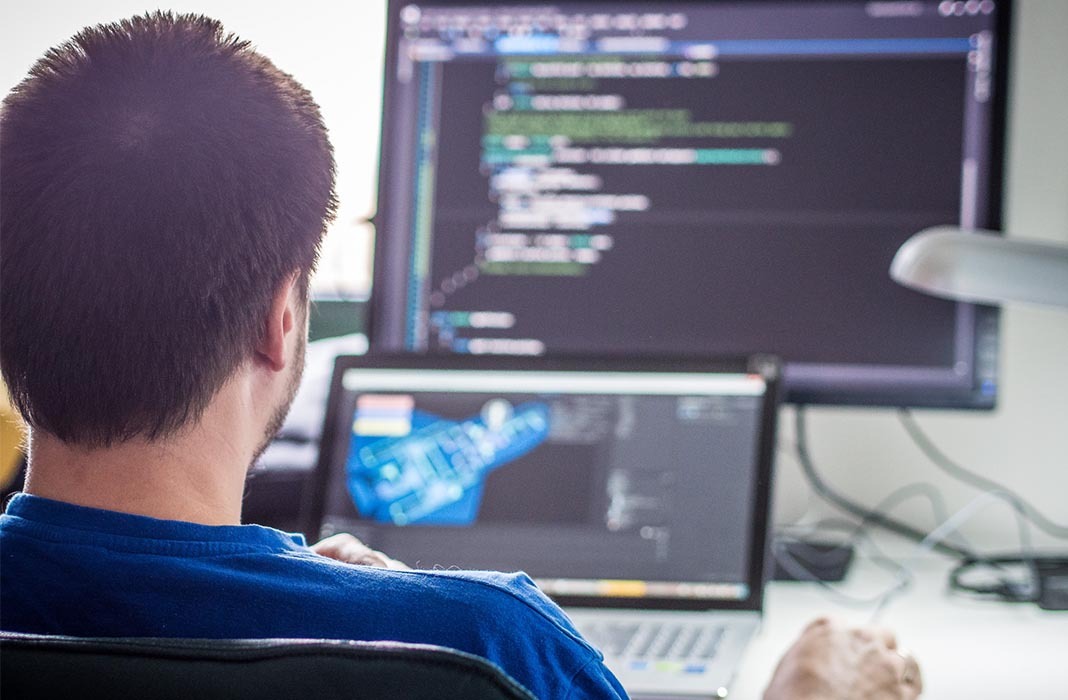 Any video game player with the most minimal creative inclinations has wondered if they’d be able to create a game without knowing anything about programming. The answer to this question is a little tricky. Although you need to have a bare minimum understanding of math and algorithms to get started with these types of projects, there are plenty of tools to make the development much easier, to the point that it’s unnecessary to even touch a key. In the case of Android in particular, there are tons of SDKs (software development kits) that let you create your own games from scratch, without having to pay any special attention to the technical intricacies. Here are some of the most popular options available on the market.

When it comes to choosing an SDK, the main choice between the different development environments depends on the need to program or not. There are apps that let you do practically all the work using only drag and drop gestures on the screen, but in the end, it’s practically essential to complete some of these tasks “manually” through some scripting language when you need to add more complex features. That’s why we’ve decided to separate the environments into two groups: one with programs for beginners where you barely have to program, and the other for experts where it’s necessary to know at least some language before jumping into action. 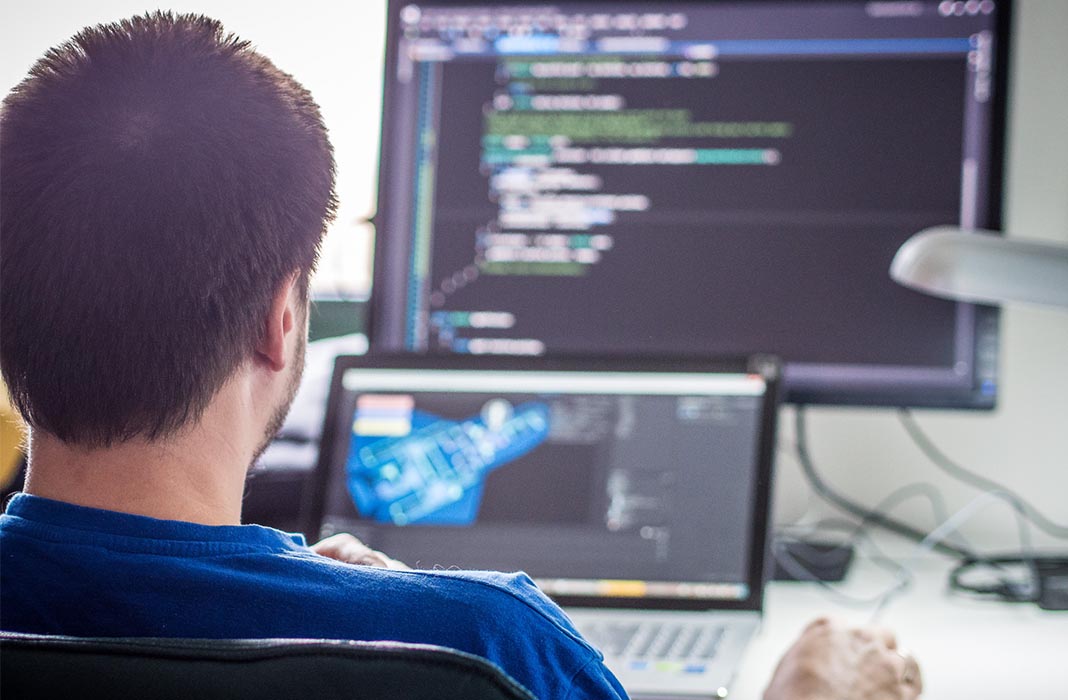 Game Maker is an old friend in the development of apps for newbies thanks to the extreme simplicity of its environment. It wins out for its complexity that varies according to how much you want to get into GML, its own scripting language. That said, you can create your game using a simple drag and drop interface and with the help of tons of tutorials you can find online.

In terms of creating specifically for Android, the program relies on the installation of components from Android Studio (which you’ll have to install externally), as well as the exportation of your APK or the integration of ads with AdMob. Although there are no automatic exportation assistants, with the amount of documentation that exists, it’s more than enough to create your game by following certain guidelines in terms of the touch control system and integration of external services. 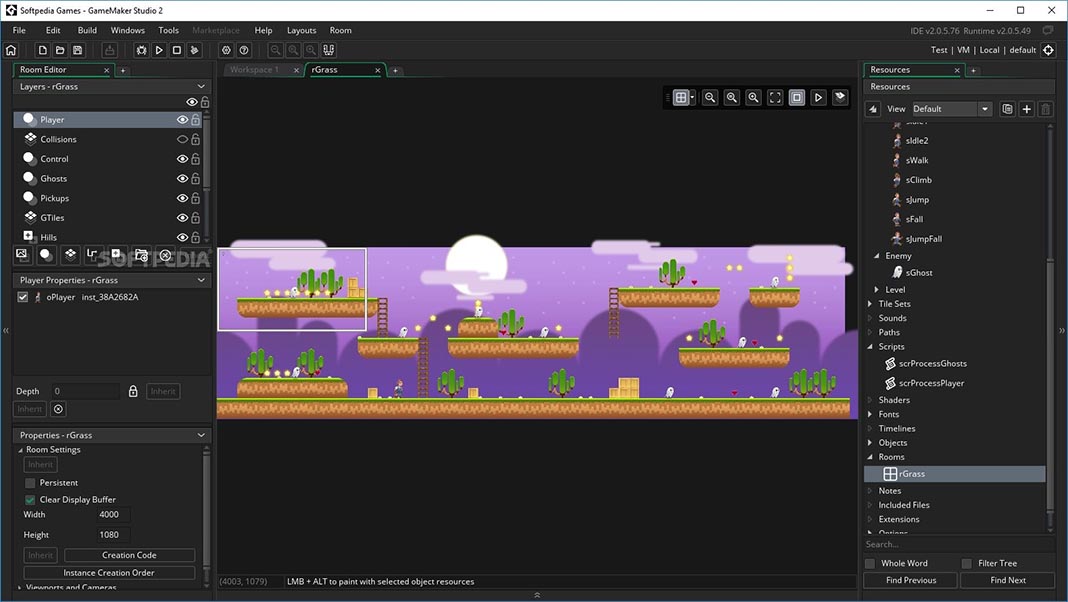 This tool does its best to make sure you don’t have to program anything (even if you want to create complex developments) thanks to its completely visual representation in pseudocode. This philosophy lets you drag modules to create all sorts of structures to build your game visually. So you only have to see the implementation of what you’ve created in the base scripting language if you want to.

The Pro version uses an annual subscription system that will let you export both for Android and iOS, also integrating support to add ads through various extensions or in-app purchases. Games like Duke Dashington and Heart Star are created using Stencyl. 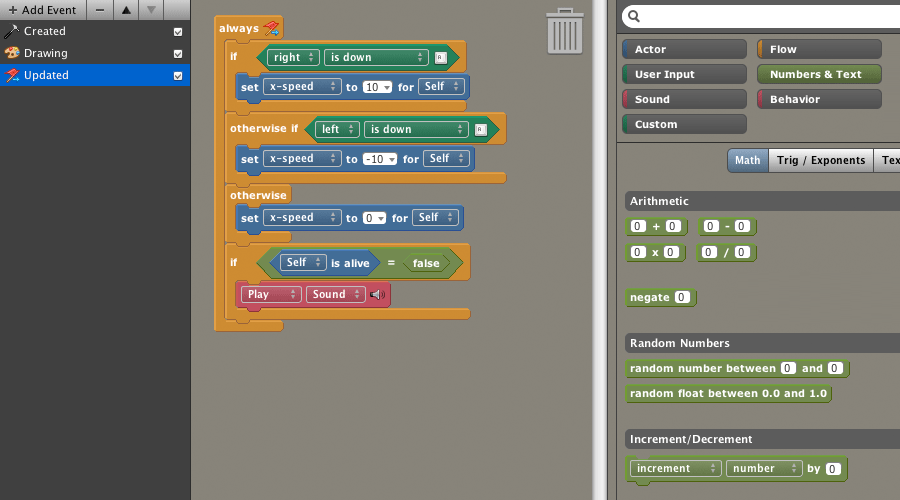 We would consider GDevelop to be a game editor that uses drag and drop methods as its bare minimum. You select objects, drag them on the screen, and assign them certain properties and behaviors from the different options available. Also, it offers its own image and tilesets editor. Other tools mentioned like Game Maker and Stencyl include these features too, but GDevelop is an SDK that’s simplified to the extreme. And best of all, it’s completely free.

For all these reasons, GDevelop may be a little too simple, and that’s why it’s good for creating simple action games, platformers, and puzzles, but you won’t find many free alternatives that include such a great visual environment for developing. 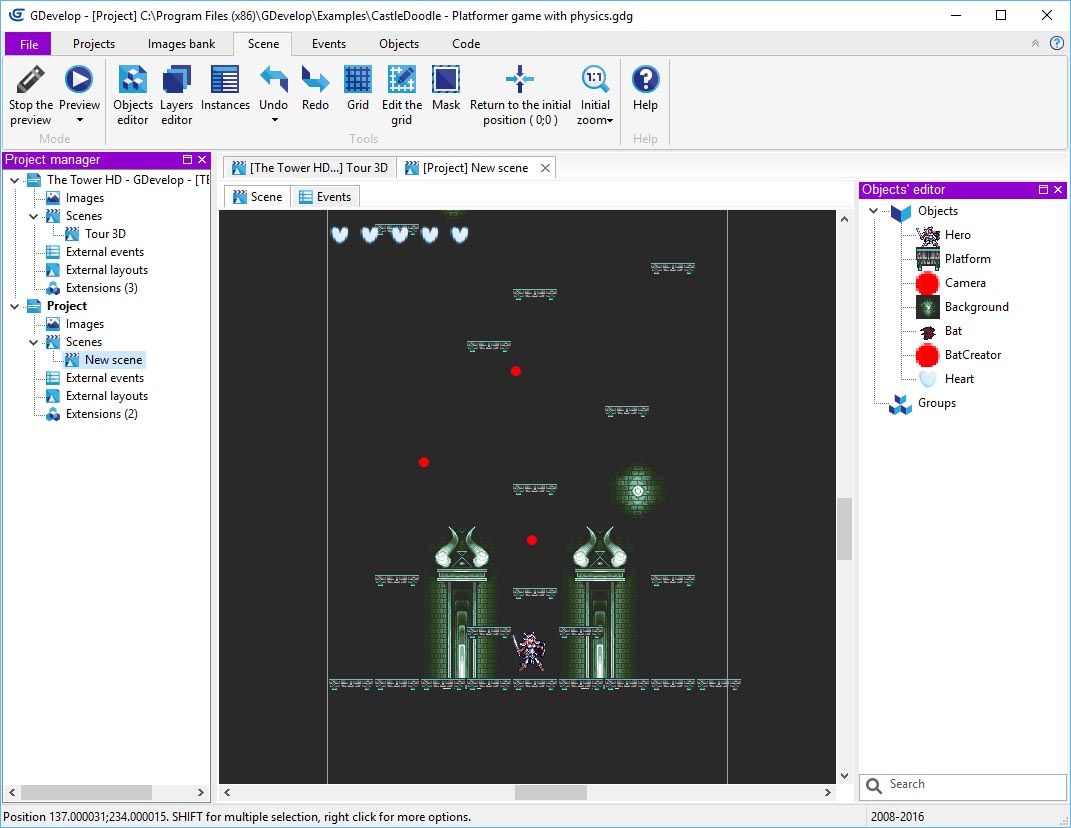 Another one of the leading app development programs that doesn’t require programming knowledge. In 2017 it made a big leap when it went from Construct 2 to Construct 3. Its emphasis on maintaining its beginner profile is so extreme that it took eight years to add support for JavaScript programming to satisfy the demands of more advanced users. That said, it’s very different, maintaining a simple but interesting visual paradigm based on events and triggers.

One of the most interesting features is that it can work as an online tool directly from the browser and save your projects in the cloud. This means you can work with it on practically any device. Plus, it includes support for ad integration and it’s even compatible with Facebook Instant Games. This is because the projects are exported in HTML5, which makes the exportation and manipulation of projects incredibly versatile. 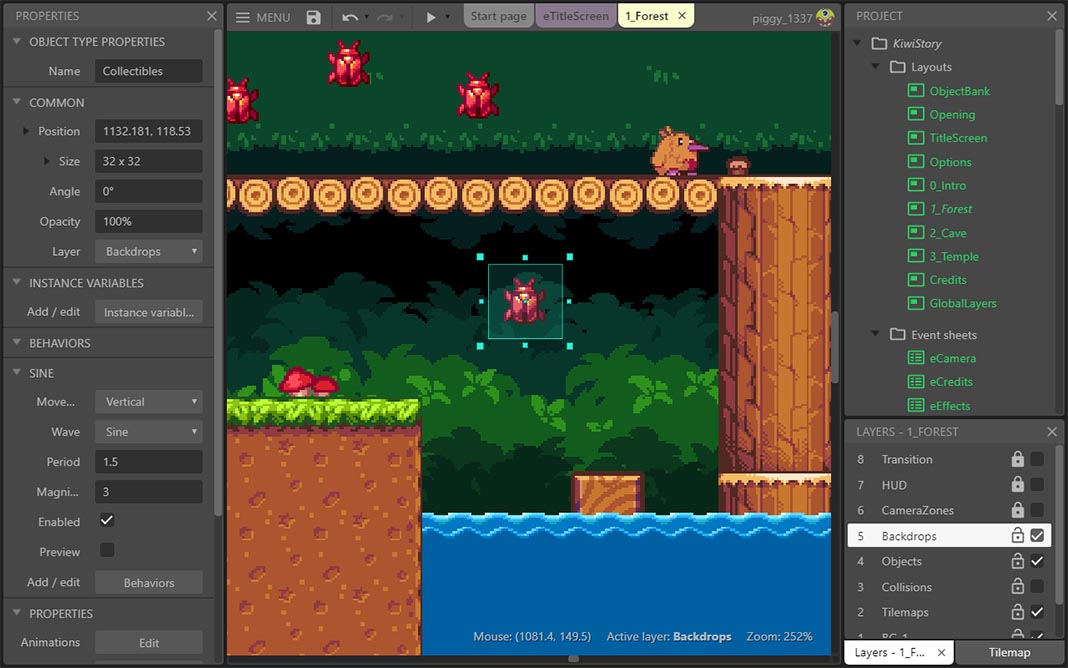 Without a doubt, this is the most well-known and used option. Currently, over half of the games published on Android are created using this familiar cross-platform development environment with an enormous community and support. The best thing about it, in addition to its versatility when it comes to creating both 2D and 3D games for any genre, is that it’s free for amateur creators. In fact, you’ll only have to pay for the Pro version if you earn more than $100,000 dollars for your work.

The possibilities and compatibility with other external tools is enormous, letting you import models and resources from Blender, 3ds Max, Maya, and ZBrush, just to name a few. Plus, the programming language it uses is C#, so in the case of Unity 3D, you’ll need to know how to program in order to make your creations. That said, thanks to its asset acquisition system, you can import all sorts of elements to your game, like models and music. 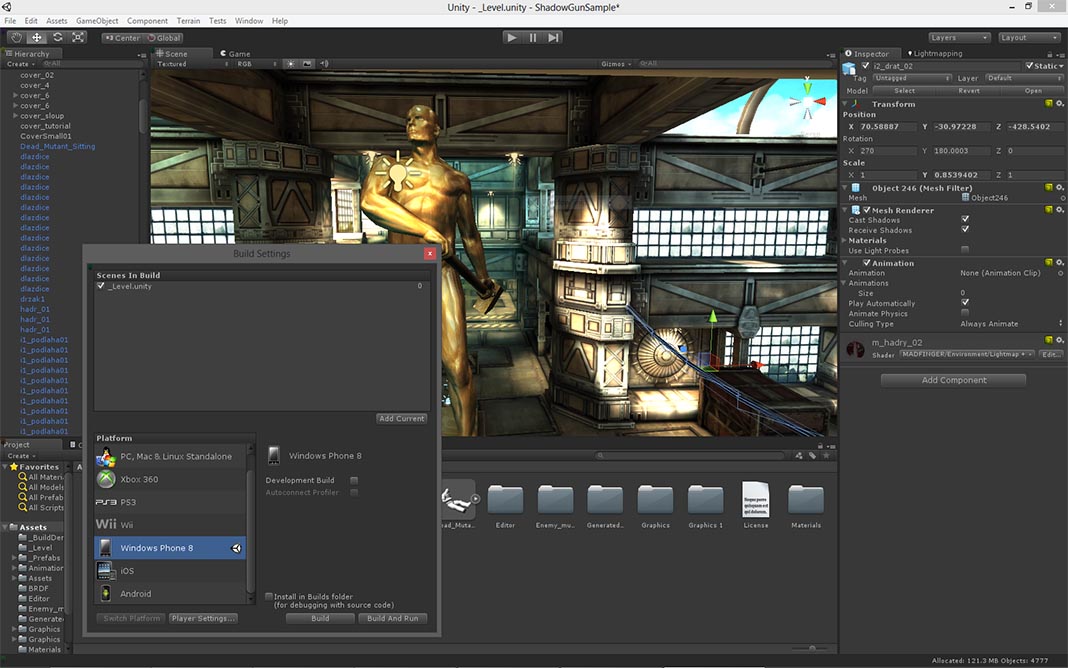 The engine developed by Epic Games is another one of the big ones used by countless commercial video games. Yes, obviously Fortnite is one of them. The really surprising thing about Unreal Engine is that, even though it’s an editor that’s completely centered around creating 3D games, it’s relatively possible to create complex developments without hardly touching code. This is possible thanks to a visual system of events where you’ll apply properties to the objects from endless preset templates that will orient you during the creation process.

Just like what happens with other SDKs on the list, this one lets you get audiovisual recourse through its own asset store, along with countless compatible importation formats. When you add in the fact that it’s free to use (that is, until you end up making bank off of your creation), and the enormous community of developers and documentation available, what you find is a really great tool. 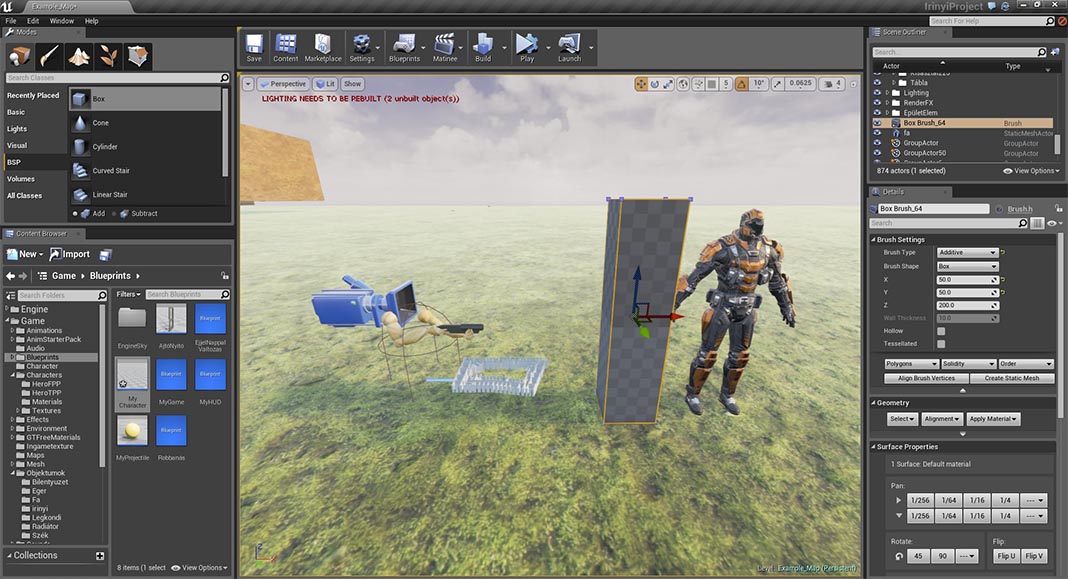 Rubbing elbows with the greats from a much more humble project. Godot is a fantastic multipurpose development environment that lets you create video games of all kinds, with physics and rendering systems for both 2D and 3D environments. It relies on its own GDScript scripting language with many similarities to Python, although it also supports C++ and C#.

That said, Godot includes an endless number of assisted tools for the creation of settings and environments, from specialized physics engines for 2D developments to animation editors for sprites, including a complete scene editor with the possibility of applying post-processing effects from the preview. Obviously, it’s a great tool that has a whole lot to offer, while asking for nothing in return. 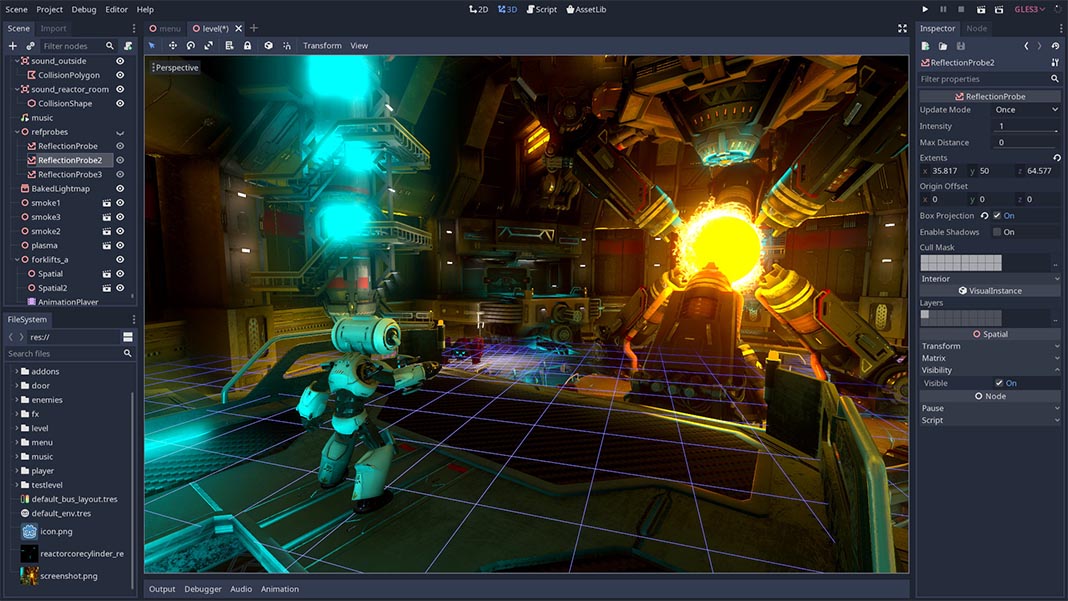 Solar2D also fills a need that may exist: you want to become a great programmer and you’re not all that interested in the frontend of the tool or its possible wizards. In this case, Solar2D can be a good starting point, not only because it’s completely free to use, but also because it’s based on the compact scripting language Lua, which can be a great jumping-off point to get started in the world programming. Of course, in this case it’s not an integrated development environment, so you’ll be able to code “bare-bones” next to the project preview window.

Beyond this, it’s an Open Source environment supported by its own resource store and a community of users and support that’s been around for several years. In fact, Solar2D is a fork of the old original Corona 2D. Even so, the tool and its community are still very active, as evidenced by the support for 64-bit apps, essential to comply with the latest changes imposed by Google in this regard. 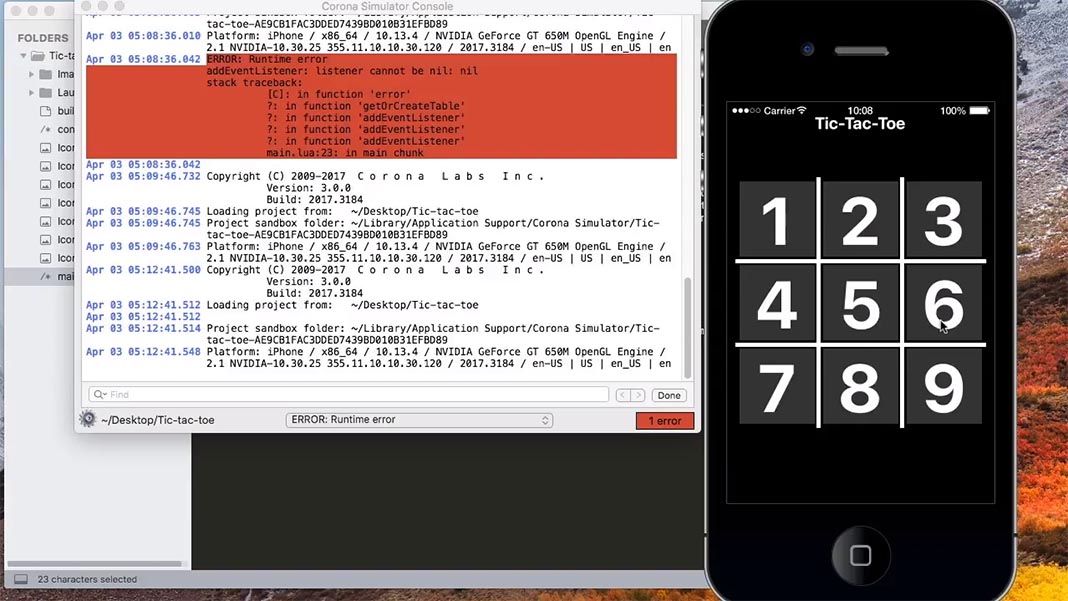 Cocos2D is another boss in the field of video game creation frameworks. Its open source nature has led to the existence of several versions of the tool since the original written in Python was released in 2008. These include Cocos2D-X, with its core developed in C++ and a total rethinking of the development environment thanks to Cocos Creator, an all-in-one tool that adds scripted drag and drop tools to the project to make it accessible to beginners and people who aren’t used to working with code from scratch. It’s a humble project that has turned into a monster with rounds of funding and massive use by top mobile studios. 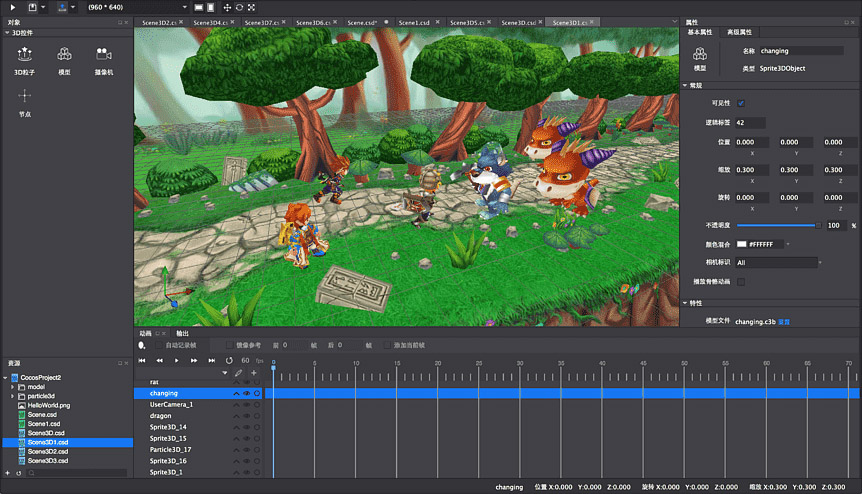 GDevelop is an Open Source platform for creating HTML5 games