Home Tutorials and Guides Son, I need you to fix my phone again: Tips for keeping... 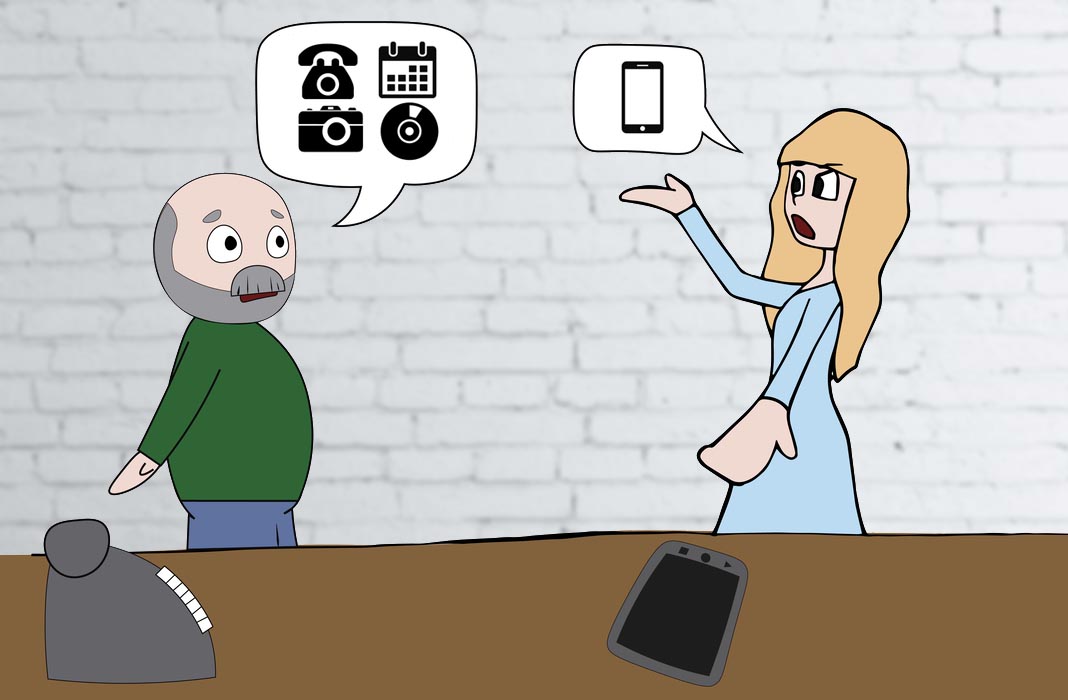 I’m sure that on more than one occasion, your peace and quiet has been interrupted by the shadow of your mother or father approaching you with their smartphone in hand. The look on their face is a mix of frustration and confusion and yes, once again, the smartphone is ready to be thrown out the window. Of course, the only thing the phone is guilty of is offering features that, according to your parents, only young people can understand. And now comes the time when you curse the day you gave your mom or dad that Android smartphone so they could manage enormous family groups on WhatsApp, use their Facebook account from anywhere, or take awkward candids of you to send to your Aunt in Milwaukee. Ever since they switched from their indestructible Nokia 3310, you’ve become the best technician in the family and you have to deal with all the problems…”Sweetie, I need you to fix my phone for me again!”

A home screen only Picasso could love

Now comes the time when your mom is trying to find the Facebook icon and ends up confusing it with LinkedIn. The “leave it to me and I’ll find it” idea falls apart when it comes to looking for apps on a screen that looks more like a cubist painting than an Android smartphone.

There are apps like Rootless Pixel 2 Launcher or Lawnchair which you can use to organize your phone’s homescreen. This way, the icons appear organized with the clean and minimalist look from the official launcher from the Google Pixel interface.

This way, all the apps are organized into drawers and it will be much easier to create certain virtual compartments where you can add the icons of your mom’s most used apps.

So your dad still saves all his photos on CDs

There your dad goes again, looking through his drawers for that USB cord that’s wrapped up with its original twist tie, just to move all the photos from his phone to the computer. He’s found it and now he has that stack of Verbatim DVDs in his hands that he uses as sort of a digital photo album. He’s about to pass the 2,564 photos from his phone gallery to DVDs to free up space. And it’s up to you to stop him.

Being the good son or daughter that you are, you help him out and tell him about the “new” technology that exists to save photos in the cloud. Google Photos offers numerous features to organize the pictures in your gallery online. You can even change the date on different groups of images to have different albums separated how you want them.

This app even can recognize faces so that you can search for photos of specific people. This way, your parents can quickly index the photos of your cousin Julio or ones where your grandma had her best smile.

This thing has less memory space than a diskette

Now that your dad is uploading his pictures to Google Photos, it’s likely that he won’t come back telling you he’s seeing the “internal memory full” warning ever again (hopefully).

To make sure that this doesn’t happen, you have to optimize the storage system for videos and images shared via WhatsApp. The messaging app accumulates and even duplicates all these files, easily filling up your device’s memory. For this reason, it’s a good idea to install an automatic cleaning tool like Cleaner for WhatsApp that gets rid of information you don’t need.

For more convenience, it’s worth mentioning that the new versions of WhatsApp already offer a tool that lets you free up space. Thanks to “Storage usage” you can manage how chats store your information and thus, optimize your phone’s resources without installing extra apps.

Adding 500 contacts by hand was never an option

The dreaded moment has arrived. Your mom has now brought out her old address book from the 90’s along with that pencil that’s been sharpened down to a nub. Yes, she wants you to help her put all her contacts on her phone. Once against, she’s lost all her contacts, and now is your chance to make a backup and finally send that address book straight to the recycling bin.

Thanks to Google Contacts you can easily migrate all the phone numbers on your SIM card to a Google account so you always have your contacts stored on the cloud. This way, all you have to do is have your device synced with the Google Account in question so you never lose another phone number ever again.

Currently, Google Contacts has updated to detect and merge all the duplicate contacts automatically in a single account.

I see ‘something weird’ and I didn’t touch anything

And now to finally put an end to this endless list of common problems. Your dad’s notification bar is more packed than Miami beach in the summer, and that’s most likely due to his continuous ‘unintentional’ clicks on bloatware on the device.

We can solve this drama by deleting all those pesky apps that come installed by default by the brands of different devices. To do this, companies like Huawei already offer the possibility to disable the apps that you don’t find necessary like HiCare, the Swiftkey keyboard, and Phone Clone. Just go to Settings > Apps.

There are also more complex possibilities to delete bloatware without needing to have a rooted phone, based on installing ADB drivers and opening the shell through the command console.

Thanks to all these apps, your parents’s phones should now be clean and optimized to get the most out of the Android universe. Now, maybe your parents will be better at ma… “Son, install something on here to see the World Cup results!”