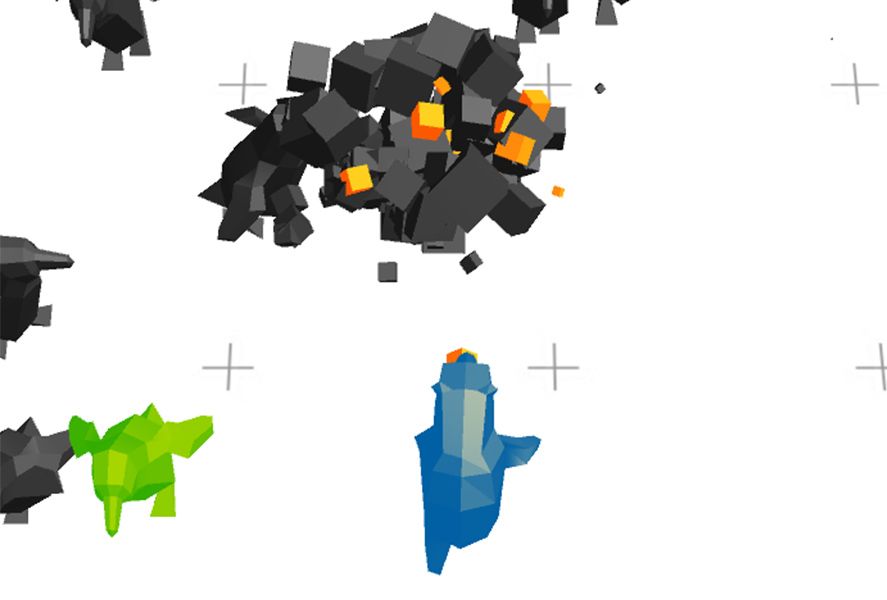 Arcade games are going through a second youth thanks to the advent of smartphones. If you’re like me you’ve surely spent an infinite number of coins in arcades – and now the genre probably keeps you glued to your device. If the game is good it can bring you back again and again for instant fun. Time Locker is a member of this select club. And it manages that with much force and originality thanks to its look and its premise: time stops when you stop playing. Time Locker is an undercover shoot ’em up thanks to the characters in the game. The cast includes penguins, monkeys, dogs, and tanks – to name just a few – that you have to shoot with your own character, who is also part of your unusual and surreal gang. All designed in low poly style where every volley of bullets is followed by an explosion of voxels that makes you score go up and up and up. A fun premise in itself that gets a new dimension thanks to the fact that the time stops in the game when you’re not doing anything.

This gameplay with time stoppage is influenced by the brilliant SUPERHOT, a third-person shooter where the clock ticks only when you move your character. The same thing happens in Time Locker, adding an element of strategy to each move you make so you alway have to be asking yourself what you’re going to do next. Time Locker makes this feature very much its own in this intense and addictive game. The controls in Time Locker couldn’t be simpler or more effective. One finger serves to move your character around the level – forward, backward, and side to side. All with the aim of keeping the enemy hordes from touching you, as that would mean the end of the game. Your character automatically shoots at all times so all you have to worry about is taking care of his moves.

The fact that the action stops when you’re not touching the screen shouldn’t make you overconfident. Although you can plan your next moves, you can’t take too long to do it as some sort of black mass is chasing you at all times, whether the time is stopped or not. As you can imagine, if this dark chunk manages to touch you it spells the end for you. Like this Time Locker forces you to make quick decisions and rewards continuous action. Time Locker gets intense as you advance given that there will be more obstacles that can put an end to your game: the cohort of absurd enemies grows tremendously, with static rocks and huge cubes that try to stop you. You’ll even have to deal with cannon shots and fire from more enemies. Just when you think you can breathe easy, you’ll suffer vicious attacks from gigantic final bosses. The game will do its damnedest to finish you off early.

Luckily you’ll find objects that help you on your journey. Whether they’re new weapons that you can collect after killing the blue bad guys or coins to do lots of things with: restarting the game right where you’ve died or unlocking new characters or random stuff when you start a new game. The coins aren’t at all scarce, though you can also view ads to get a bunch more. Time Locker really is genius. And not just for its fun development, but because it manages to marry gameplays from other titles (SUPERHOT, Crossy Road) and still make them its own. An essential and free title from the Android catalog that has become one of my faves of 2016. Fun, addictive, and with loads of personality. The first game developed by sotaro otsuka is an experience not to miss.