We’ve sort of grown accustomed to mobile PvP games that follow a similar pattern of gameplay. Games like Hearthstone, Clash Royale, and others all exist within the same boundaries with a few small changes to differentiate them from each other. The problem is that these differences aren’t enough to truly constitute a paradigm change for the genre. Fortunately, there are games that try to break the mold like Super Senso, a new kind of competitive game that wants to take the throne of mobile PvP games. 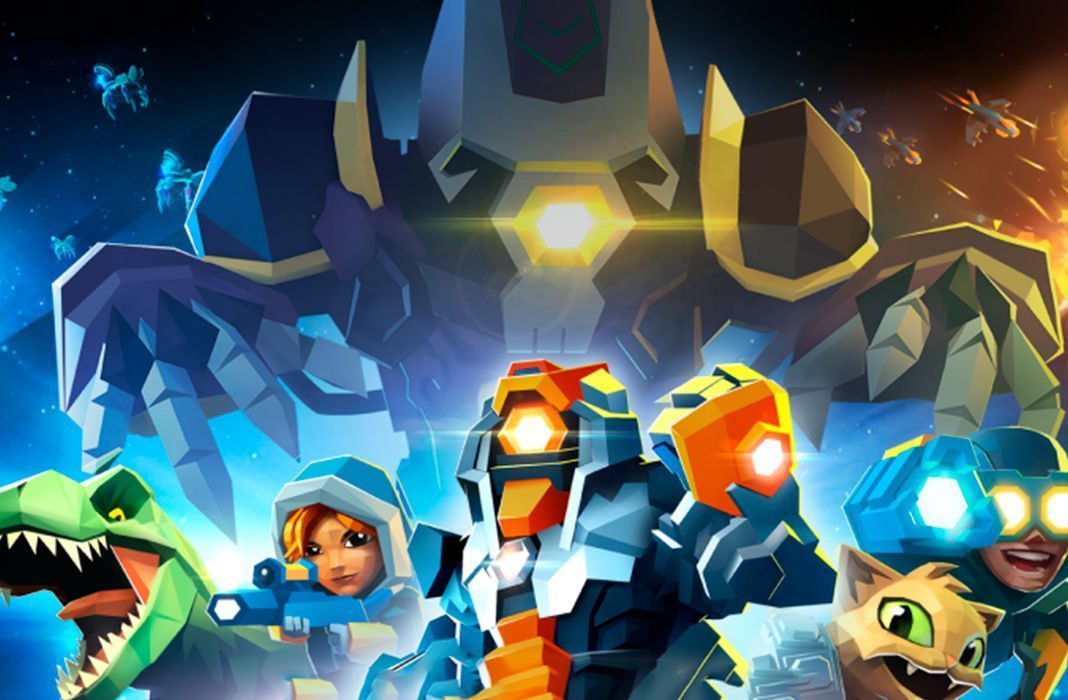 Starting to play Super Senso can come with a sense of deja vu. Doing battle on a square map by deploying your units brings back memories of ancient games like chess. But if you think about the current world of interactive entertainment another title comes to mind: Advance Wars. Nintendo’s classic title is clearly a source of inspiration for Super Senso, but fortunately Turbo Studios managed to make their title stand out with new ideas thought up exclusively for the mobile gaming market.

The point of Super Senso is to destroy the base of your rival, called a ‘Senso-Portal’, while making sure that yours isn’t destroyed first. To do so you have to launch units and special abilities onto the battlefield that you have assembled into a deck of cards. Until this point there isn’t that much different from Clash Royale and others, but Super Senso distances itself from the competition with a huge strategic element more similar to titles like XCOM, Fire Emblem, or Advance Wars. You’ll notice the difference immediately with diverse maps of 11×9 tiles that you must conquer to move forward. 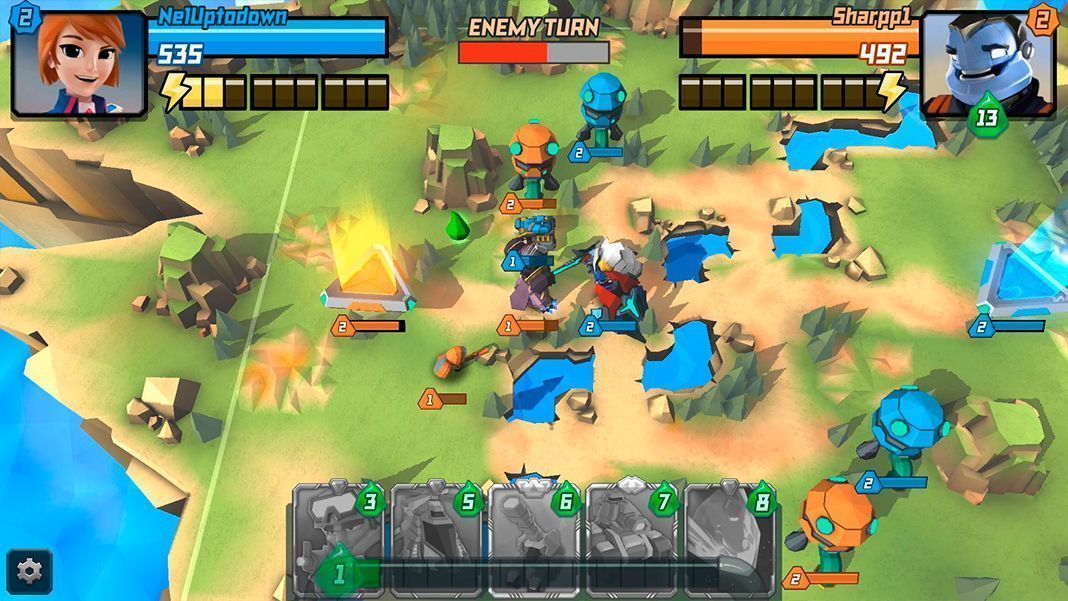 Sending out all of your units at once will probably not do away with your opponent quickly, in fact it will likely do the opposite. Each action you take needs to be well thought out, so you are given a good amount of time to execute them each turn. Of course, you also can’t take the backseat, since matches only last 5 minutes. You start each match with special unit called a ‘Senso’, which is a giant mech that’s much stronger than the rest of the units. There are also two buildings that are important to taking down your enemy. Although the true objective is to take down the enemy base structure, you can also do so indirectly by destroying enemy units and buildings to fill your combo meter. At the end of your turn you deal damage to the enemy Senso-Portal depending on how full the meter is. You should pay attention to it, since it’s a vital part of the game.

Bringing turn based strategy to the world of eSports

Although no one will dispute that strategy is also fundamental in games like Clash Royale, the quick and aggressive strategies of recent versions has nothing to do with the kind of strategy required in Super Senso. As stated above, each action on your turn has an effect, but your deck composition and card synergy are equally as important. There are all kinds of characters and you’ll need to adapt your strategy well to come out victorious. For example, there are ranged units and others with even more destructive power than your Senso. Plus, there are several Senso to choose from, each with their own strengths and abilities. 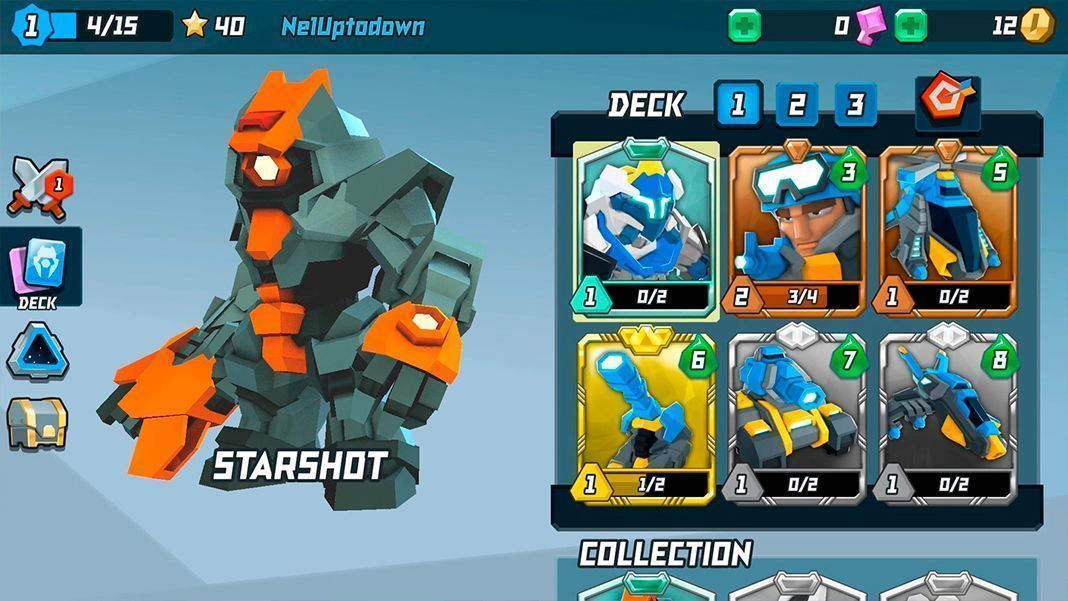 This strong strategic element makes the game unique among its peers, which was the main goal of Turbo Studios when they began to develop the game in 2013. But that doesn’t eliminate the usual suspects of mobile games, like leveling up cards, random rewards from loot boxes, and a standard shop. These familiar elements are a good way to attract new players, which is critical since the game wants to become the king of online PvP games. In an interview with Venture Beat, Yohei Ishii, the CEO of Turbo Studios, stated that ‘Our genesis and our north star has been to bring competitive gaming to mobile, and not a diluted, watered down version of competitive gaming, but really something that is experienced best on mobile’.

This means that the matches don’t last any longer than 5 minutes, but still have all of the other gameplay aspects that make Super Senso so great. One of the best features is its excellent graphics. The game’s art director, Richard Liu, wanted to give the game a unique touch by using low-poly unit designs reminiscent of paper models. And that isn’t just limited to the characters. Even the stages look like little pieces of origami. It’s a fresh look that the game pulls off well. These cool visual elements are yet another characteristic intended to elevate the image of mobile gaming. And even more so in the world of eSports.

Will it reach the heights of Hearthstone or Clash Royale?

Super Senso doesn’t want to be ‘just another game’. Its objective is to match the popularity of games like Clash Royale and Hearthstone, and to do so it’s been in testing for a long time. It doesn’t just try to offer the best product possible, it also wants to provide a fair and balanced matchmaking experience that many other titles aren’t able to achieve. This long period of development has also given the game its fair share of ups and downs.

At first Nexon had the rights to launch Super Senso, which was initially scheduled for 2016, and obviously ran into numerous delays. Then, in 2016, Japanese gaming giant GungHo Online bought the rights to the game. It was an interesting change toward the long tradition of Japanese mecha culture with a company that had a lot of experience thanks to other titles like Puzzle & Dragons. Plus, Yohei Ishii was able to get a great deal for the international launch of Super Senso that included many events and tournaments in the future. 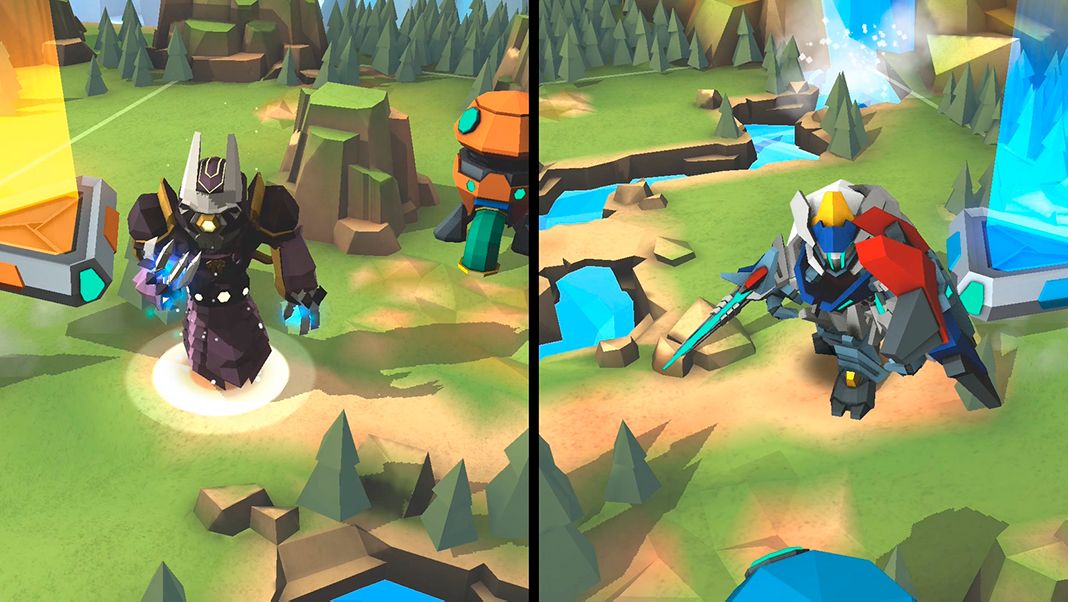 Super Senso is now available to be played by anyone all over the world. After it’s launch in North America on April 27, 2017, there were few places left to launch. It finally arrived in Europe and South America on January 24, 2018, and we’ve already been busy digging into it. It’s a great game with the potential to become huge due to the incredible amount of work invested into it. Hopefully it meets the expectations of the great developers at Turbo, who have previously worked on games like Eve Online, League of Legends, Clash Royale, and Battlefield. You can never have enough giant mecha games, especially when they are as spectacular as Super Senso. 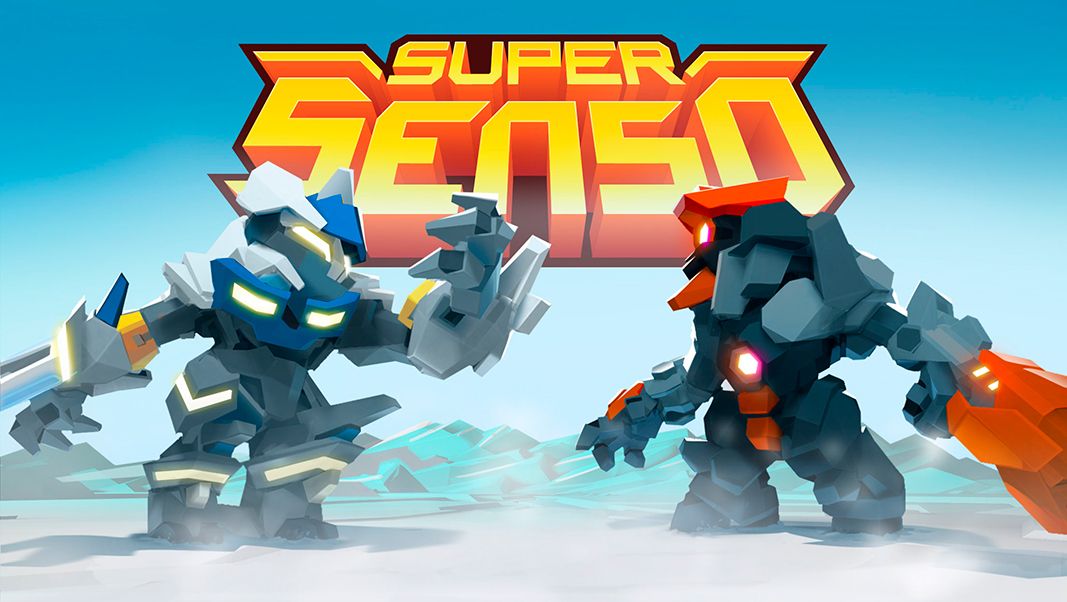