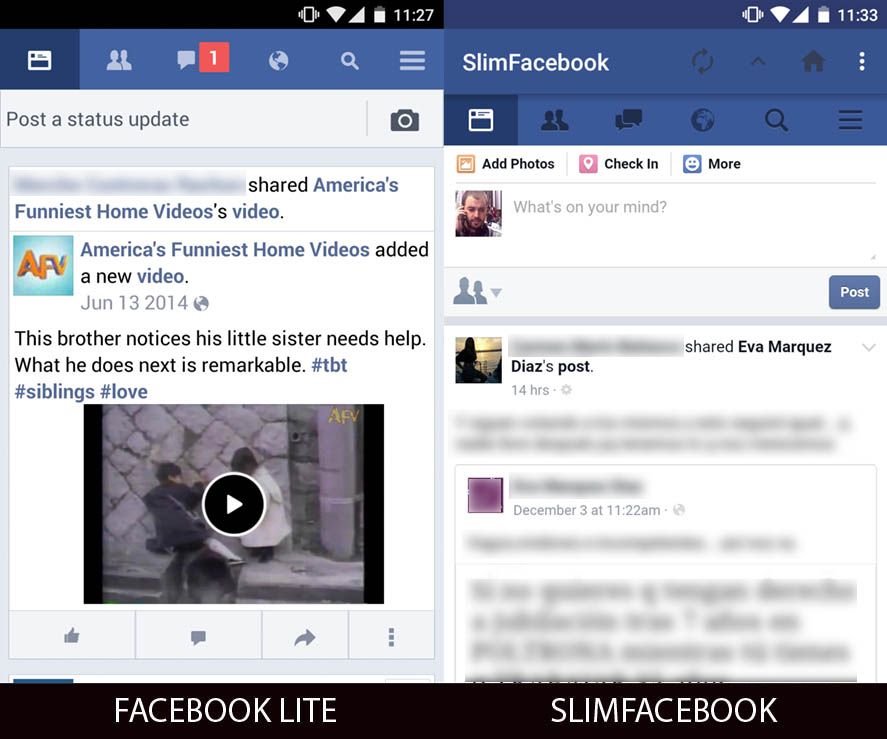 There’s no debate here: The official Facebook client is getting worse and worse in terms of resource consumption and performance. Luckily, Facebook Lite appeared as an alternative official app that uses much less data and enormously improves on performance by using the web interface of the social network. Now, though, Facebook Lite is facing a significant new competitor: SlimFacebook. This is an unofficial client that also builds from the mobile web version but enormously improves on its interface.

From the depths of the XDA forums appears this project that currently weighs only 680 kilobytes and requires no installation permissions (compared to the 465 kilobytes of FBL with its enormous string of permissions). The biggest problem with Facebook is that, as you view the mobile web version almost exactly as it looks from your mobile browser, its aesthetic leaves a lot be desired in terms of the size of the page elements and the position of the menus. SlimFacebook resolves this problem, even managing to make it look like you’re not looking at the web client. The upper bar is laid out in a much more elegant way, with a double menu that lets you quickly access the home screen, reload the page, or scroll up to the top of your feed. In addition, from there you can access a special menu from which you can tick the option to organize posts in chronological order rather than by importance.

The page views are much more coherent and come closer to the organization of the official app. In terms of the integrated chat, its look is lightyears away from Facebook Lite, getting rid of those crude balloons and inverting the order of the conversation. The details are uncountable. The left drop-down menu also makes much more sense, placing your favorites and most-visited pages up top instead of leaving the layout up to luck with irrelevant or redundant shortcuts that already appear in the top bar.