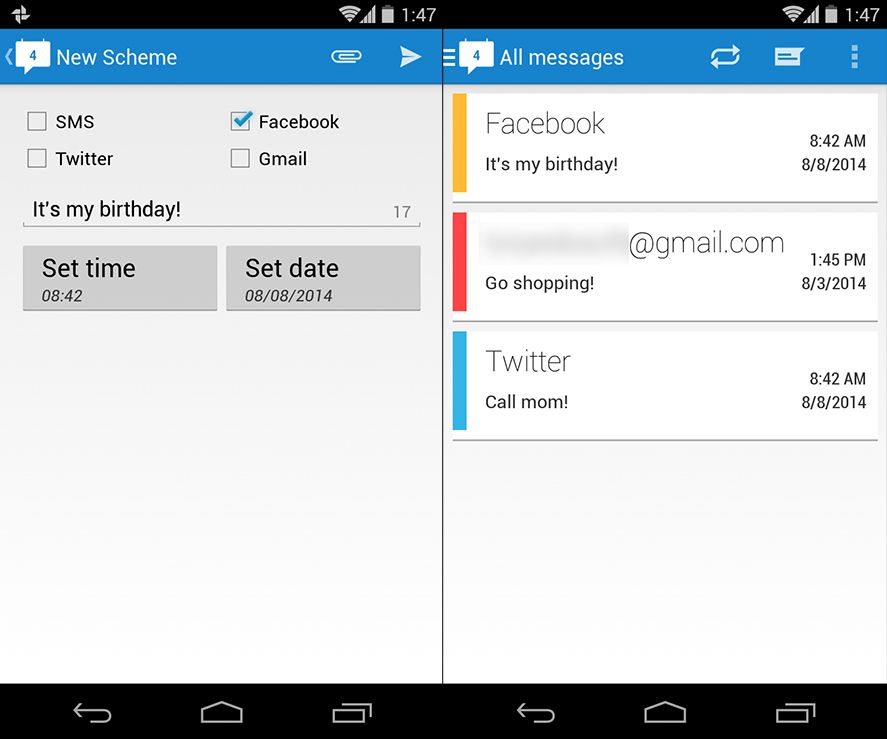 Whether because you want to personally manage your social network accounts or for any other reason, scheduling future posts is a feature that’s currently enjoying high demand. While there are certain apps that offer this option (which does not appear in the official apps for Facebook and Twitter) few of them let you do everything in the same place. Schemes – Scheduled Networkingis an app that lets you program the date and time you want to publish posts on Facebook, Twitter, Gmail emails, or even SMS messages.

The first time you log in to the service it will ask you for your Facebook, Twitter, and Google credentials to associate the program with the accounts you’re going to use. After that, you’ll go to the main program window where the list of programmed posts will appear (initially empty, obviously). When you click on the speech bubble in the upper right part of the screen you’ll access the posting menu, where you can tick which networks you want to post content to, the recipient if it’s an SMS or email, and the date and time of publication. Nevertheless, once they’re scheduled you can also edit them or remove them from the main window.

The tool’s uses are as wide-ranging as your imagination or needs permit. While its most obvious function is scheduling social media posts on Facebook or Twitter, it could also, for instance, serve as an alarm system to send you an email when you have to remember a particular event or task. While the free version of the program already includes all these features, the paid one (which costs just €0.99) lets you schedule repeat posts, that is, so you can make a post every five days without fail. It also lets you attach images and access your posting history.