Home Software Reviews Assassin’s Creed Rebellion: A brotherhood of assassins in your pocket 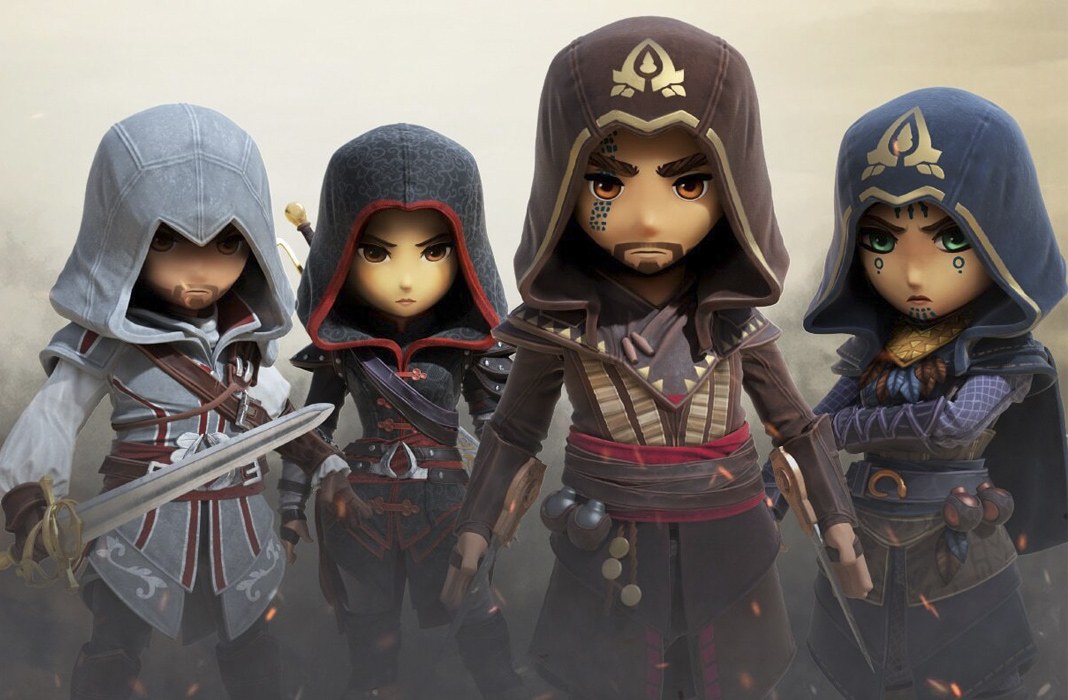 Assassin’s Creed Rebellion is proof that the ever-increasing power of mobile devices over the years has been accompanied by the appearance of increasingly ambitious games.

What started out as modest 2D recreations of console hits have, over time, evolved into the releases we can find today, capable of offering the same gaming experience as on desktop computers.

Unlike their parents before them, kids who have grown up with a cell phone in their hands are able to easily control an FPS using a touchscreen with the same expertise as they would with a handheld controller.

But not everyone has these same skills or possibilities. So, in order to not lose that huge market share, developers are always looking for new formulas to exploit existing franchises through other genres that are easier to play on a smartphone. 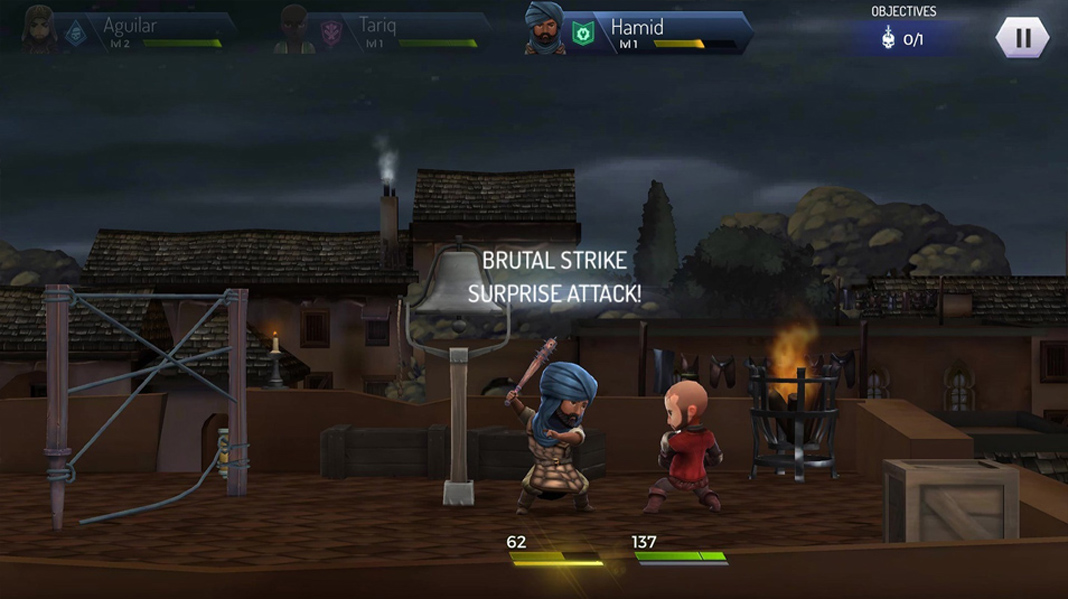 Ubisoft and Assassin’s Creed are good examples of this, with releases including AC Recollection, AC Memories and AC Rearmed. But none of those titles were as ambitious as Assassin’s Creed Rebellion, a game that combines RPG elements, strategy and management through a gameplay designed for mobile devices. And it does all this without sacrificing its impressiveness nor the hallmarks that have always defined this franchise that came into existence all the way back in 2007.

This creation from Behaviour Entertainment brings together some of the most renowned assassins from the numerous installments of the Ubisoft franchise to give shape to an authentic dream team of silent execution; from the unforgettable Ezio Auditore da Firenze to Shao Jun and Aguilar de Nerja (the character played by Michael Fassbender in the 2016 film adaptation).

Up to 86 assassins to choose from

As a user of a new version of the Animus, you’ll be able to recruit and manage up to 86 different assassins on your touchscreen. When Assassin’s Creed Rebellion was released in 2018, the roster of characters reached just over 40, but since then, Ubisoft has been adding more and more characters, many of them created exclusively for this title, along with new missions and campaigns based on the successive Assassin’s Creed installments that have been making their way onto the console market. 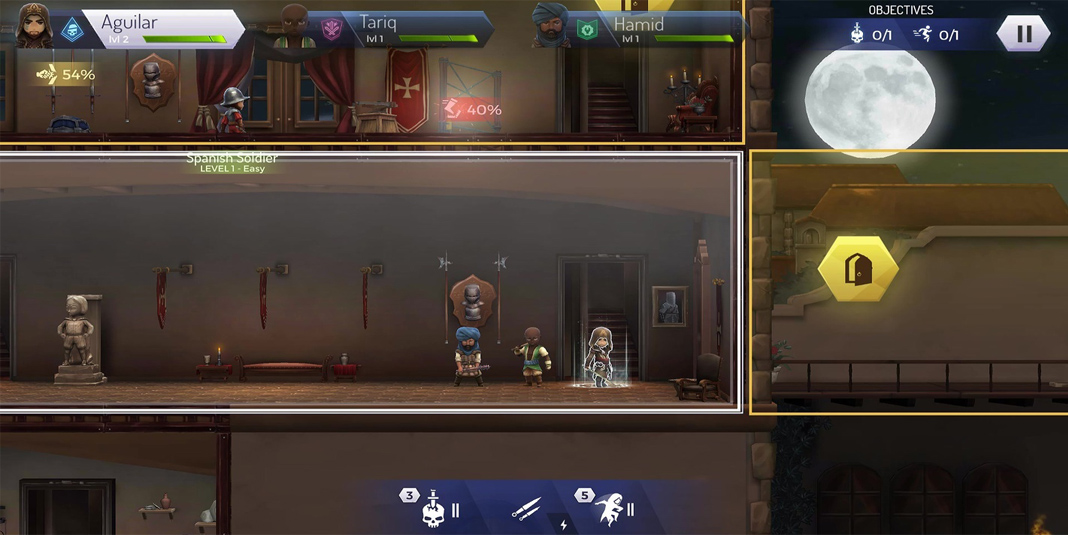 Your objective is to recruit, level up and manage this troop of assassins and set them on successive missions. It’s all set in a campaign that starts in 15th century Spain, with Torquemada and his Holy Inquisition as the main enemies.

Using the touchscreen, you’ll select three assassins from your Brotherhood to make up the squad that will take on the next mission. Once on the ground, you’ll see all the settings with a side perspective, but you’ll only get a glimpse of the interior of the following room. Inside, you’ll find traps, treasures and, of course, enemies.

Stealth as an option in Assassin’s Creed Rebellion

Anyone who’s played an Assassin’s Creed game knows well that stealth and treacherous assassinations are preferable to direct confrontation. Characters like Ezio and Aguilar offer the option to kill stealthily by default, but you’ll also have the opportunity to perform these actions (hiding in a haystack or on a windowsill) while controlling other characters, depending on the characteristics of the room in question. For example, from inside a confessional.

You won’t have to deal with an awkward touchpad or anything like that. You just need to tap on the enemy and decide how you want to assassinate him.

The fun part of the game is that each fortress, manor and castle have its own room layout, so in many cases you’ll have the opportunity to choose from a variety of routes to take. Some will lead you to extra treasures, others to traps and some will be a shortcut to the specific person you have to kill in order to complete the mission. 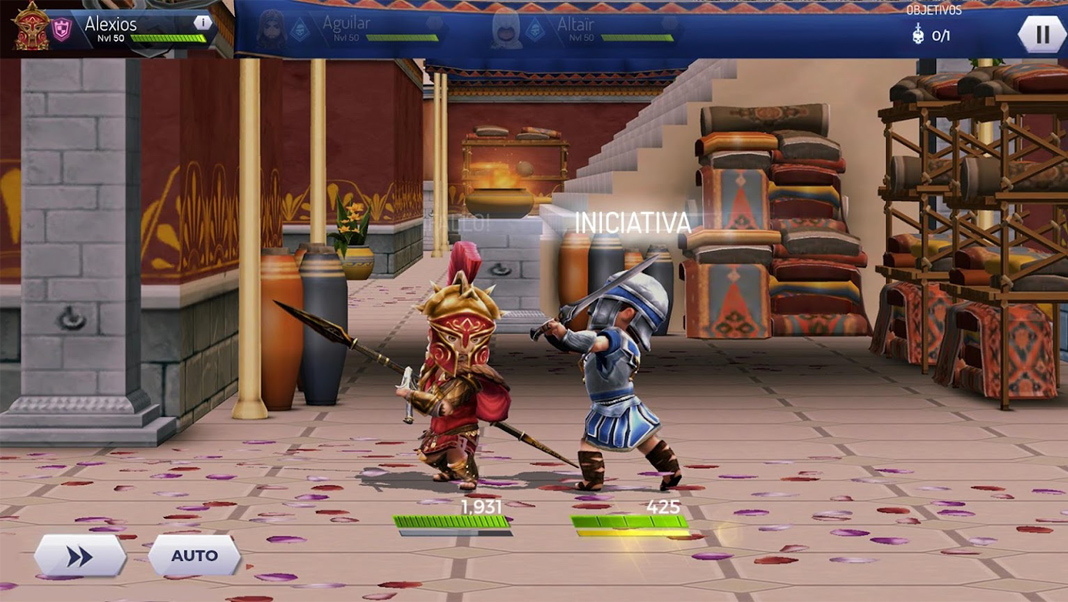 You’ll also find a certain degree of ‘randomness’ in the game; depending on the stats and abilities of each assassin, you’ll find that they won’t always get it right the first time. Sometimes they’ll fall down when climbing or descending, or they’ll fail when trying to kill stealthily.

After a few missions, you’ll see that not everything is as simple as it seemed at the beginning. The enemies will be increasingly difficult to beat and will kill off your three characters one by one in successive clashes. This is where one of the most important aspects of Assassin’s Creed Rebellion comes into play: management.

You’ll have a fortress for your Brotherhood, but you’ll have to assign each of its rooms to different functions. Whether it’s a room to train your men, a forge to create new weapons and armor, a treasury or the necessary rooms for your characters to gradually recover the life bar they lost in previous missions.

With each mission you complete, you’ll earn gold and resources that you can use to improve and expand your fortress, as well as optimize your assassins’ equipment. The DNA fragments will be the key to unlocking new characters and every day, you’ll be presented with challenges that will give you new rewards.

Of course, since it’s free-to-play, Assassin’s Creed Rebellion will tempt you with loot boxes (in the form of DNA cubes filled with rewards) as well as the opportunity to get more characters and resources in exchange for real money. In fact, Ubisoft offers you the opportunity to subscribe monthly to the Animus Premium Access, which significantly accelerates the evolution of your Brotherhood.

That said, the entire game experience can be enjoyed without spending a dime, although for this you will need time and quite a bit of patience.

Each assassin has his own stats that you can use to perform a specific task. So if you’ve assigned a character to the forge, you won’t be able to select him for a mission until he’s finished creating a weapon or armor (in real-time).

Assassin’s Creed Rebellion has a charming visual style, with “big-headed” versions of historical characters and legendary assassins from Ubisoft’s franchise, in the tradition of Japanese super-deformed style. The settings are wonderfully detailed and the quality of the oil paintings hanging on the walls is impressive.

In addition, all texts are localized into English, although given the tiny size of the letters and the amount of information displayed in each menu, you’d better have a phone with a big screen or have excellent eyesight. Otherwise, you’ll probably find it difficult to read some of the texts.

A personality of its own

Far from being a “light” version of the Assassin’s Creed experience we all know from PC or consoles, Assassin’s Creed Rebellion has a personality of its own that will dazzle anyone looking for a gaming experience that can last for months or even years, playing short rounds on your daily train commute or lying on the couch at home.

At first, it can be a little frustrating due to its steep difficulty curve, but you just have to be patient and assume that stealth and murder are just one more element within a much more ambitious “big picture.”