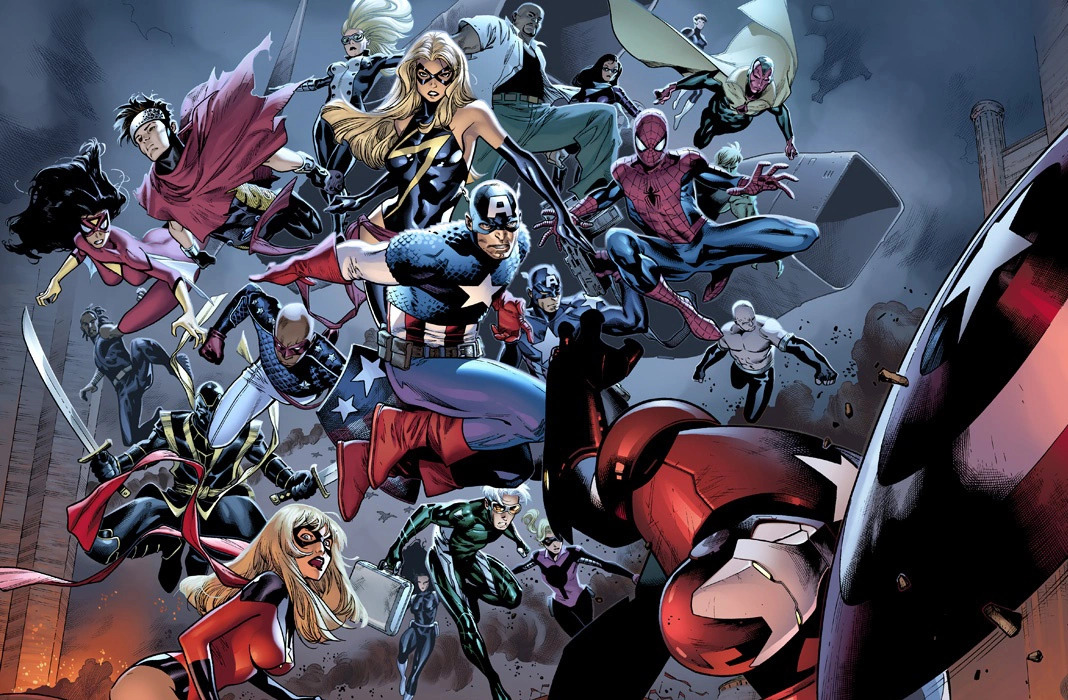 Nothing will ever replace the pleasure, and the smell, of flipping through the pages of a comic book. However, if you’re a fan of comics, you have the possibility of enjoying your favorite comics anywhere, right on the screen of your Android smartphone or tablet.

We’re here today to give you a few different options, all 100% legal, to enjoy both free and paid authentic gems of the ninth art. You’ll be able to read classics from the DC and Marvel catalogs, all the greatest independent comics and, of course, the best that the manga industry has to offer.

Distribution agreements vary depending on the region. Publishers are very careful when it comes to protecting their licensees, and if there are agreements to publish some titles in print, they won’t be available in the digital version.

That said, it’s definitely still worth taking a look at the following apps. You’ll find plenty of unpublished and out-of-print comics for all tastes.

Of course, “The House of Ideas” has its own app to download and read comics. In its catalog you’ll find more than 13,500 comics from all eras, from classic issues to the most current releases. 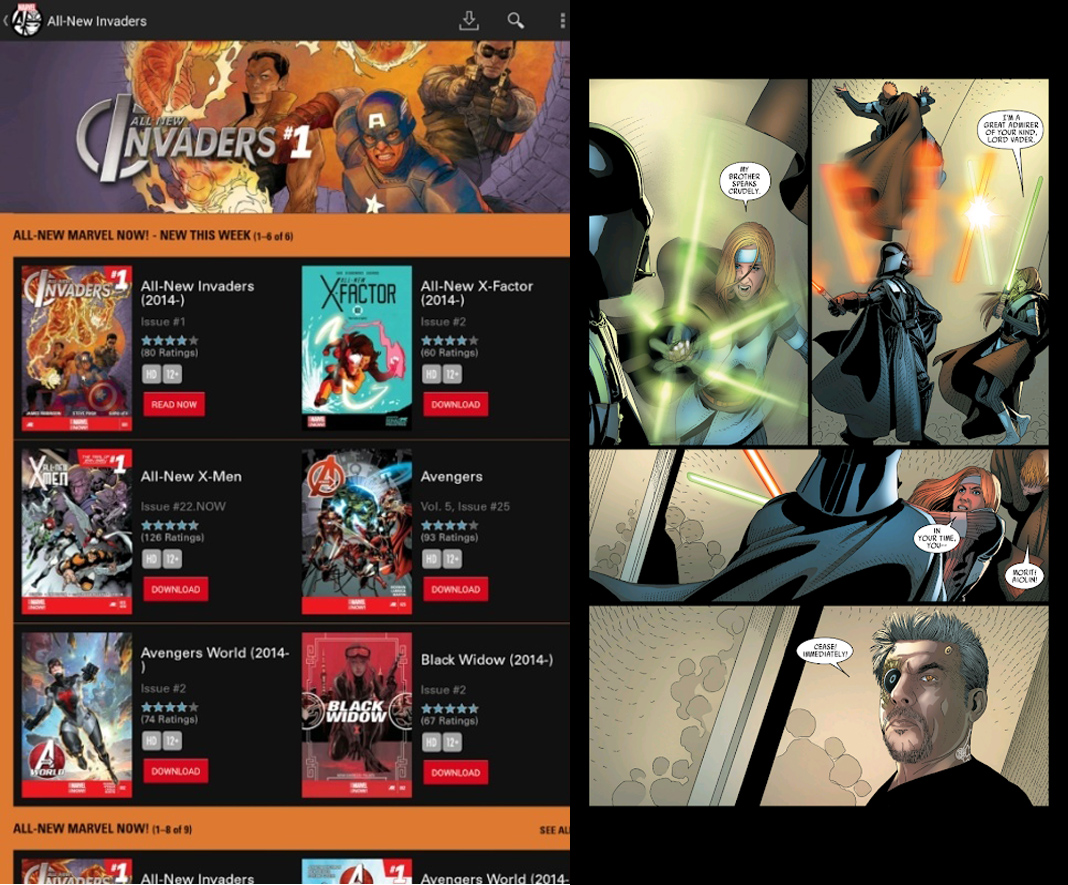 After creating an account in the app, you’ll be able to enjoy the comics you’ve downloaded on any device, simply by entering your email and password. You can also enjoy a selection of free comics, which is updated weekly. However, it goes without saying that in order to access all the comics in the app, you’ll need to fork up some cash first. 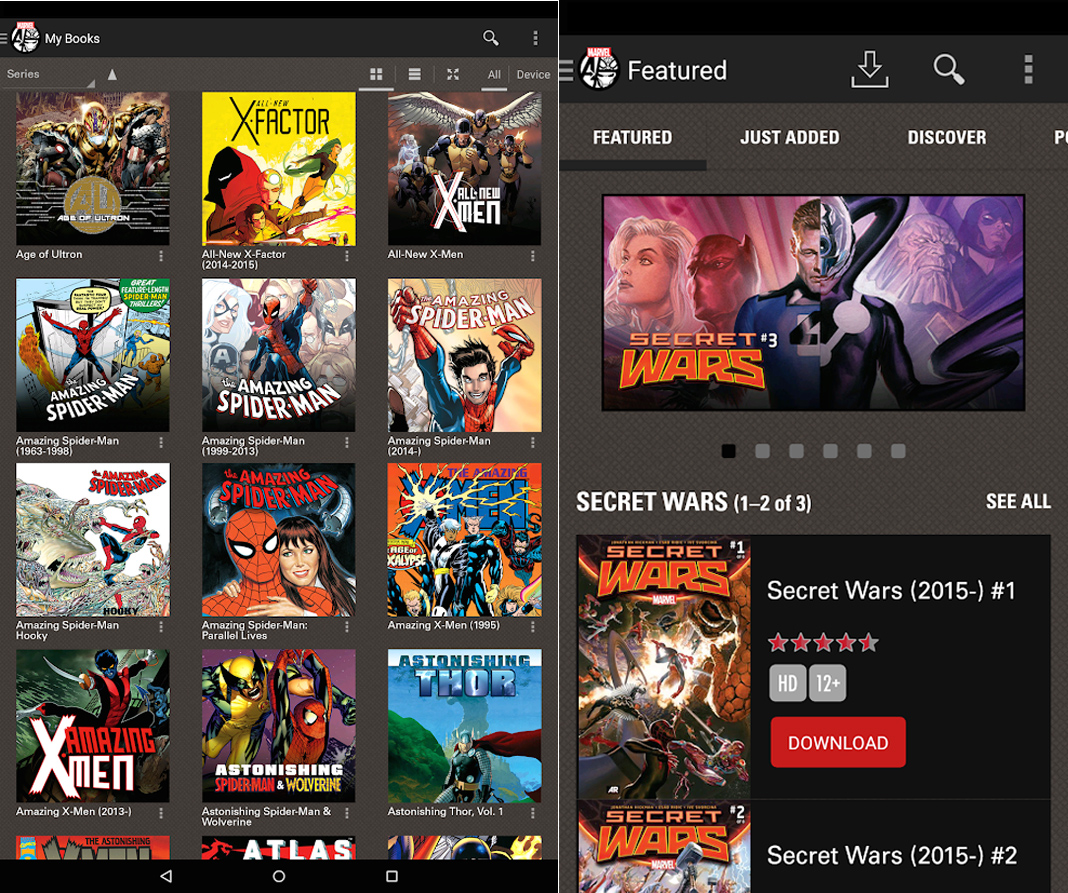 One advantage this app offers in comparison with those of other publishers is the possibility of reading the comics page by page or one panel at a time. This comes in extra handy if your device doesn’t have a very large screen (of course you also have the possibility of zooming in on the images).

This app by Comixology will open the doors to more than 100,000 comics, 100% legally, from the catalog of Marvel, DC, Dark Horse and Image, among other publishers.

Until last summer, DC Comics had its own Android app, but it was replaced by DC Universe, which doesn’t currently work in all countries. So if you’re a fan of the “Distinguished Competition,” you’ll have to download this app to enjoy the adventures of Batman, Superman and other DC icons. 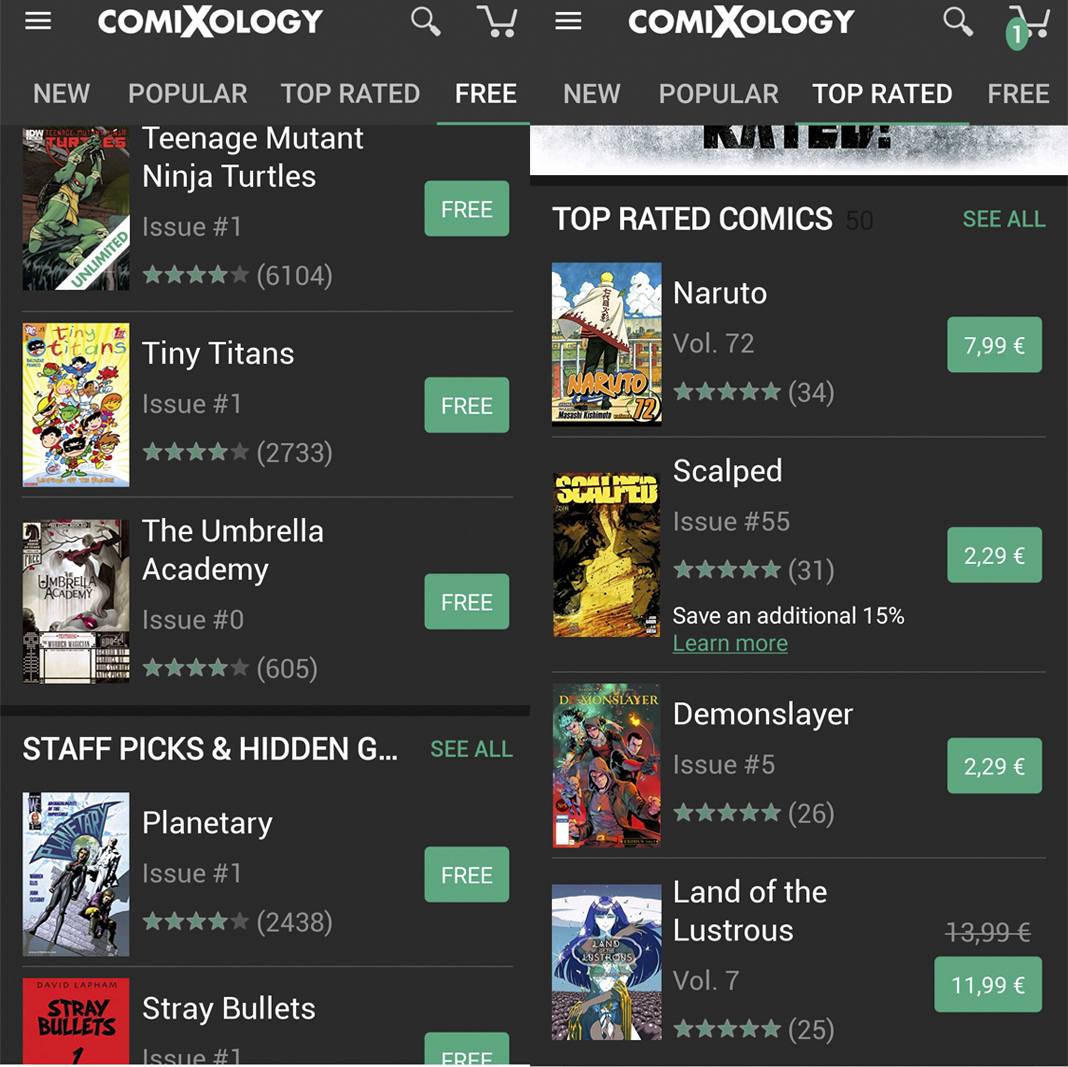 Comics allows you to purchase issues separately, and even link your account with your Kindle device. However, it also offers free issues, which you can access quickly and easily from the menu at the top of the screen. 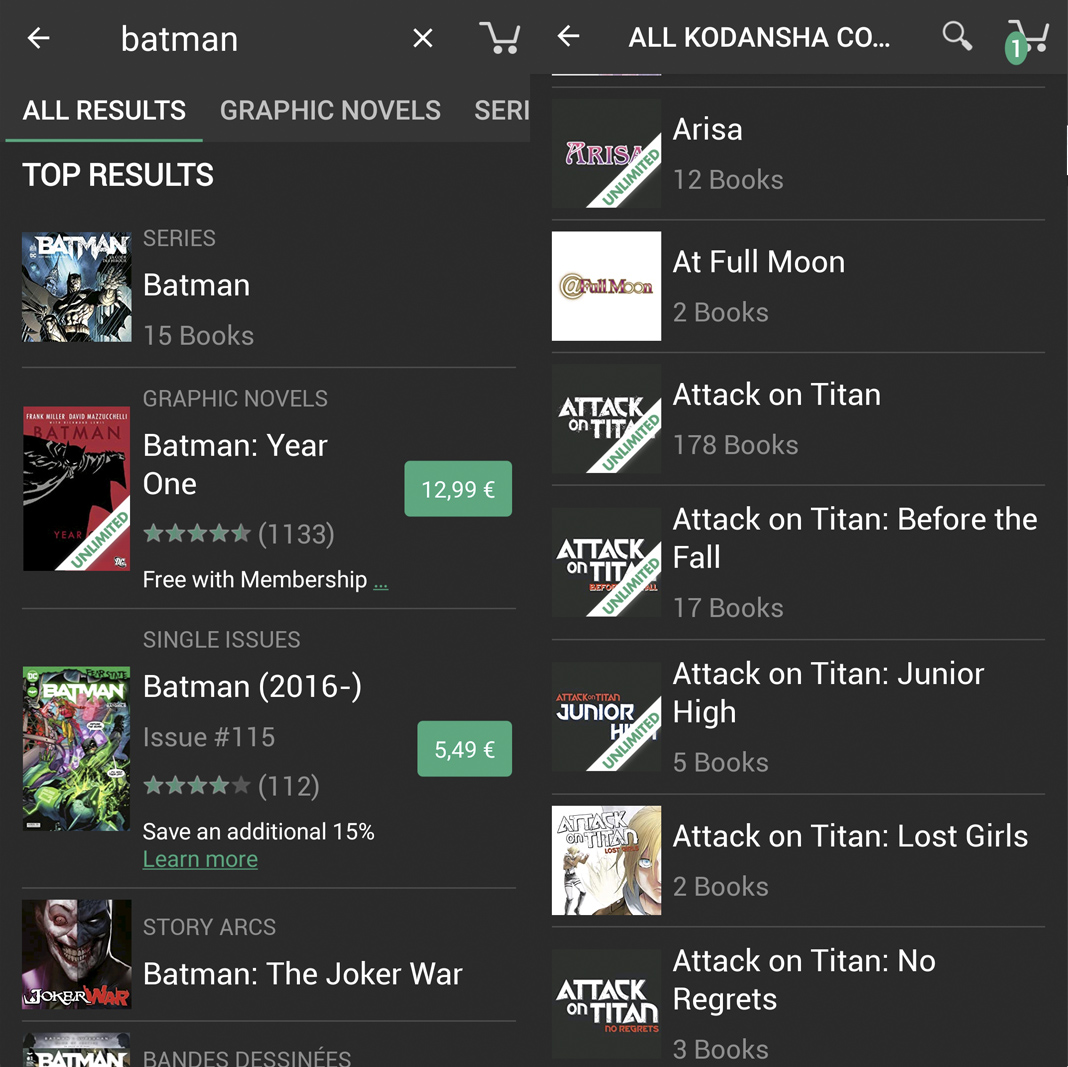 One of the great things about using this app is that it goes beyond the superhero genre to also include comics from Teenage Mutant Ninja Turtles, Judge Dreed, Adventure Time, Transformers and Bone.

There’s an exciting universe beyond Marvel and DC, and here you’ll find the best from the catalogs of IDW, BOOM!, Dynamite, Valiant, Archie Comics, Fantagraphics and even Japan’s Kodansha.

Manga Plus by Shueisha

This app is brought to us by the publisher responsible for the legendary magazine Shonen Jump. It offers tons of manga, both classic and current, in several languages, for free. You’ll find everything from Dragon Ball, Captain Tsubasa and Naruto to One Piece and My Hero Academia. 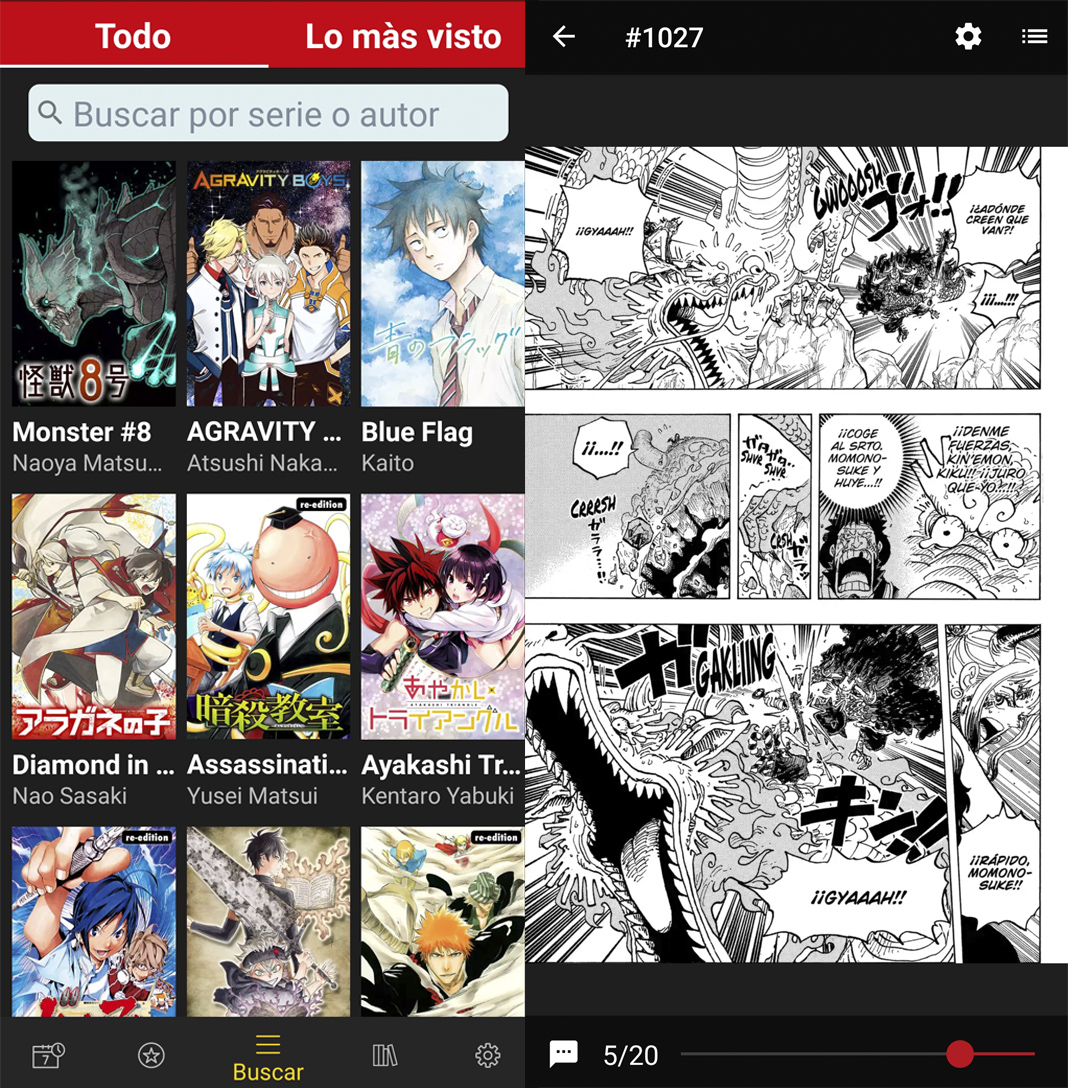 The problem is that if any of the manga, especially the most popular ones, are being published in a country, the app will only allow you to read the first and the last issues that have been published, if they’re currently still being published in their native Japan.

You won’t have access to everything published in between, so as not to undermine the respective publishers that own the marketing rights in each region. 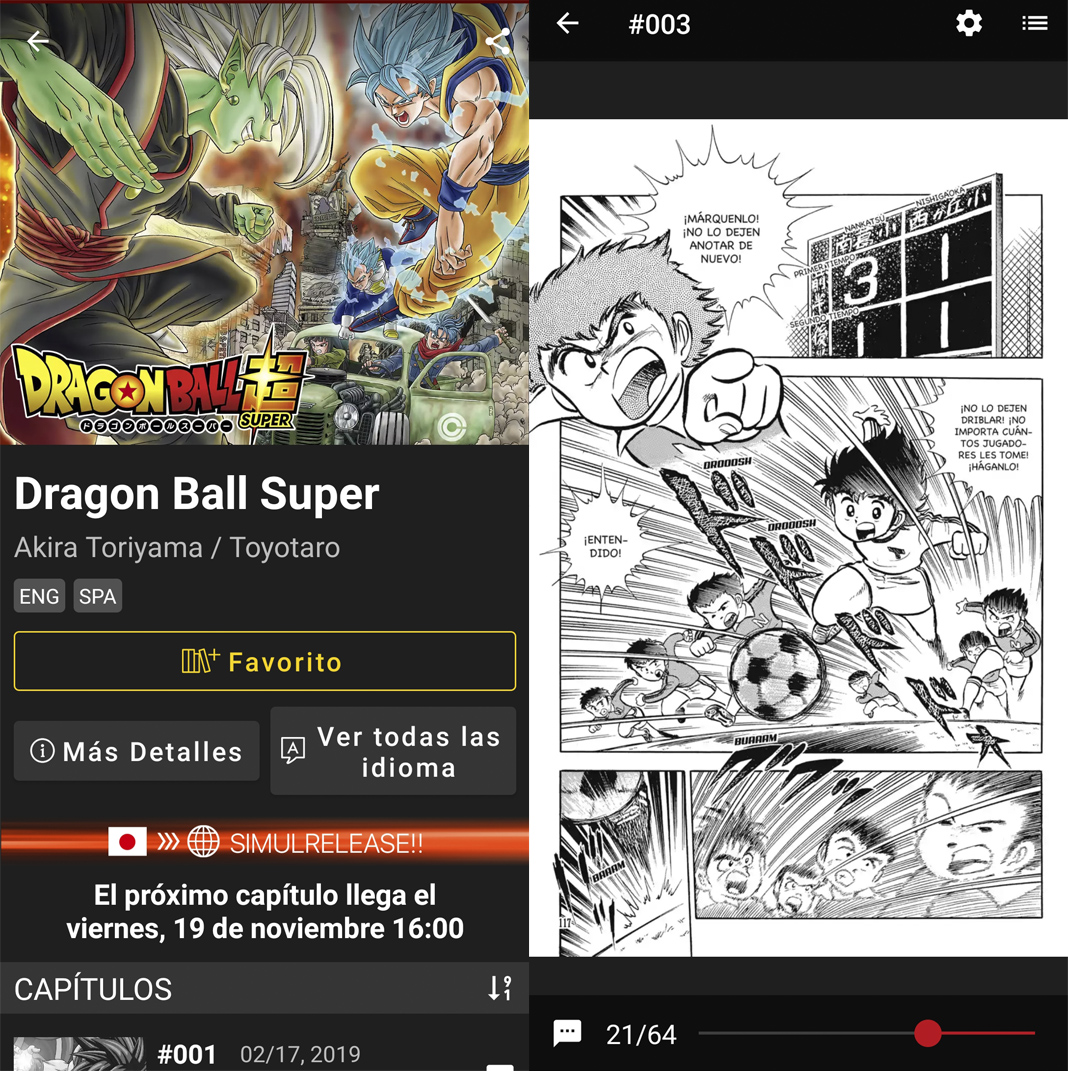 It’s a logical decision that doesn’t affect the titles that aren’t currently being published in each country. So if you like manga, with this app you can find authentic unpublished gems that you can read easily and totally free of charge.

Manga Plus by Shueisha for Android on Uptodown | Download

If you’re an anime fan, you’re probably familiar with Crunchyroll, the popular video-on-demand service that offers a huge catalog of Japanese anime through apps for smartphones (including one for Android), Smart TVs and consoles. Its sister, Crunchyroll Manga, works in the same way, but is entirely dedicated to Japanese comics. 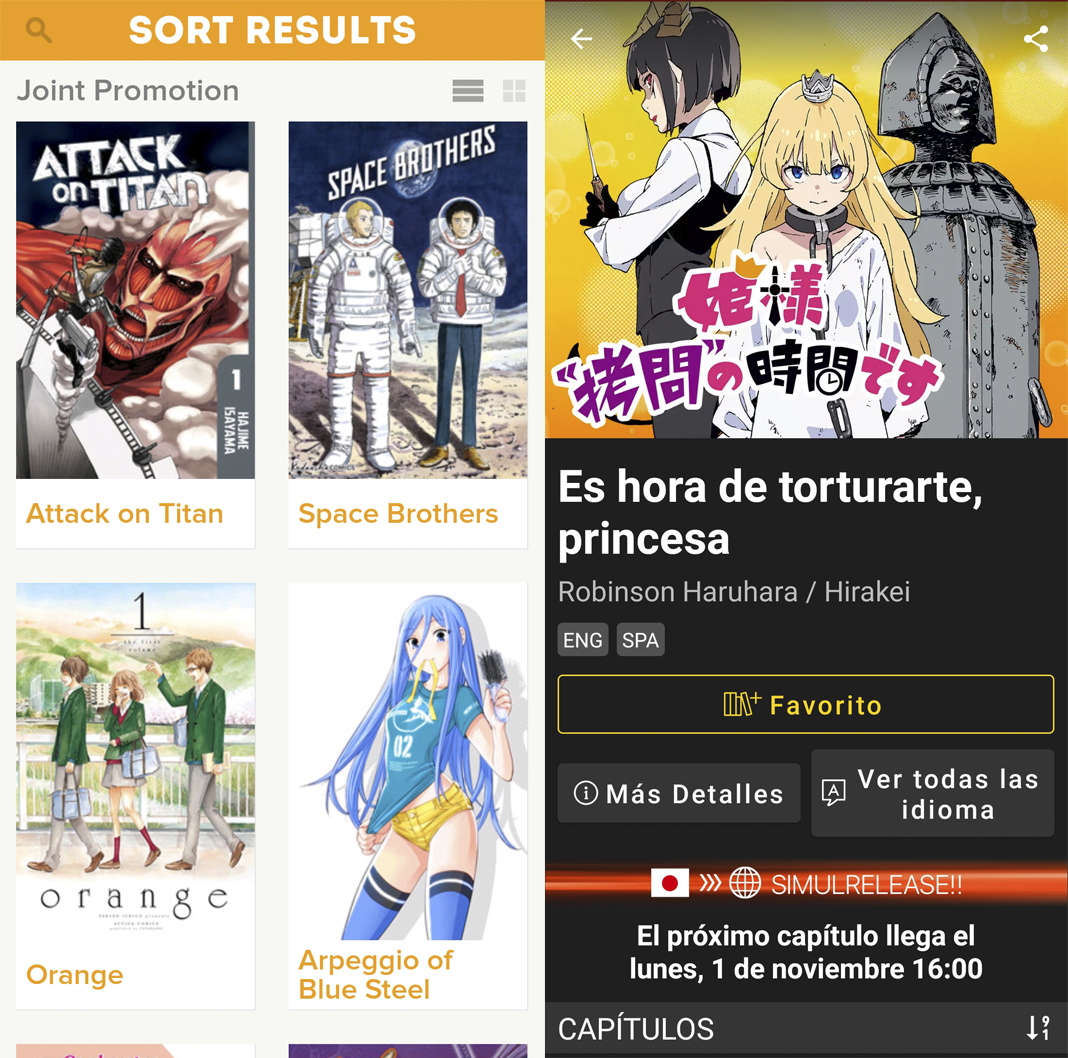 Unlike Manga Plus, however, in order to access the entire Chunchyroll Manga catalog you’ll need to pay a subscription of $7.99 per month. It will even ask you to register in the app just to be able to dive into everything it offers, although in exchange, you’ll be able to see the first issue of each collection for free.

While Shueisha’s app offers manga in Spanish, all the content of Crunchyroll Manga is in English. On the bright side, it gives you the possibility of reading all your favorite mangas as soon as they’re published on the Japanese market.

Here’s another app that manga fans are sure to love, even though MangaToon specializes in webtoons, comics were originally created to be enjoyed from a computer screen (or a handheld device). 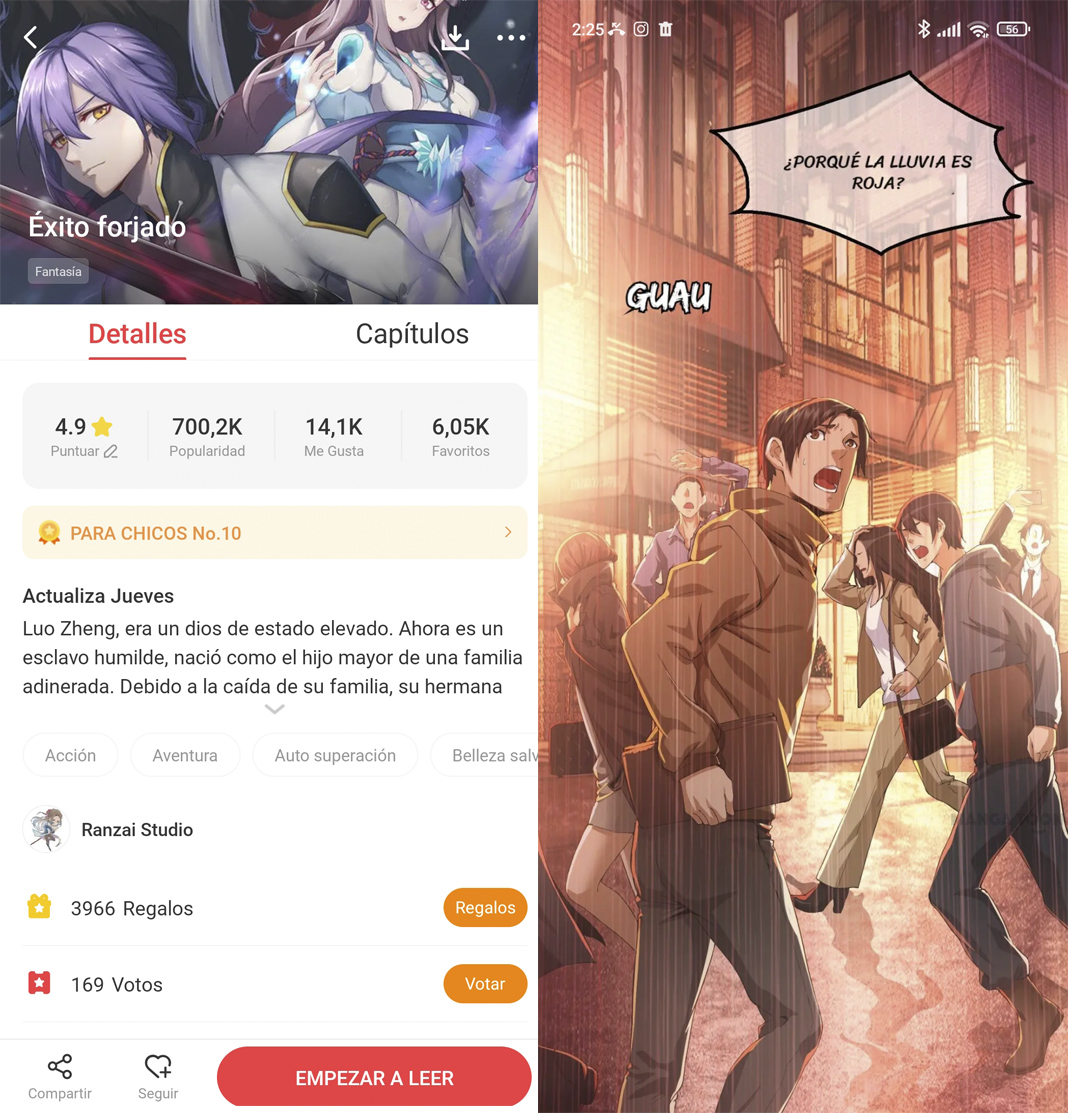 In MangaToon you’ll find mangas from every imaginable genre: action, humor, horror, Yaoi, Yuri, etc. Although they also include paid issues, most of the comics offered are free and are updated weekly. 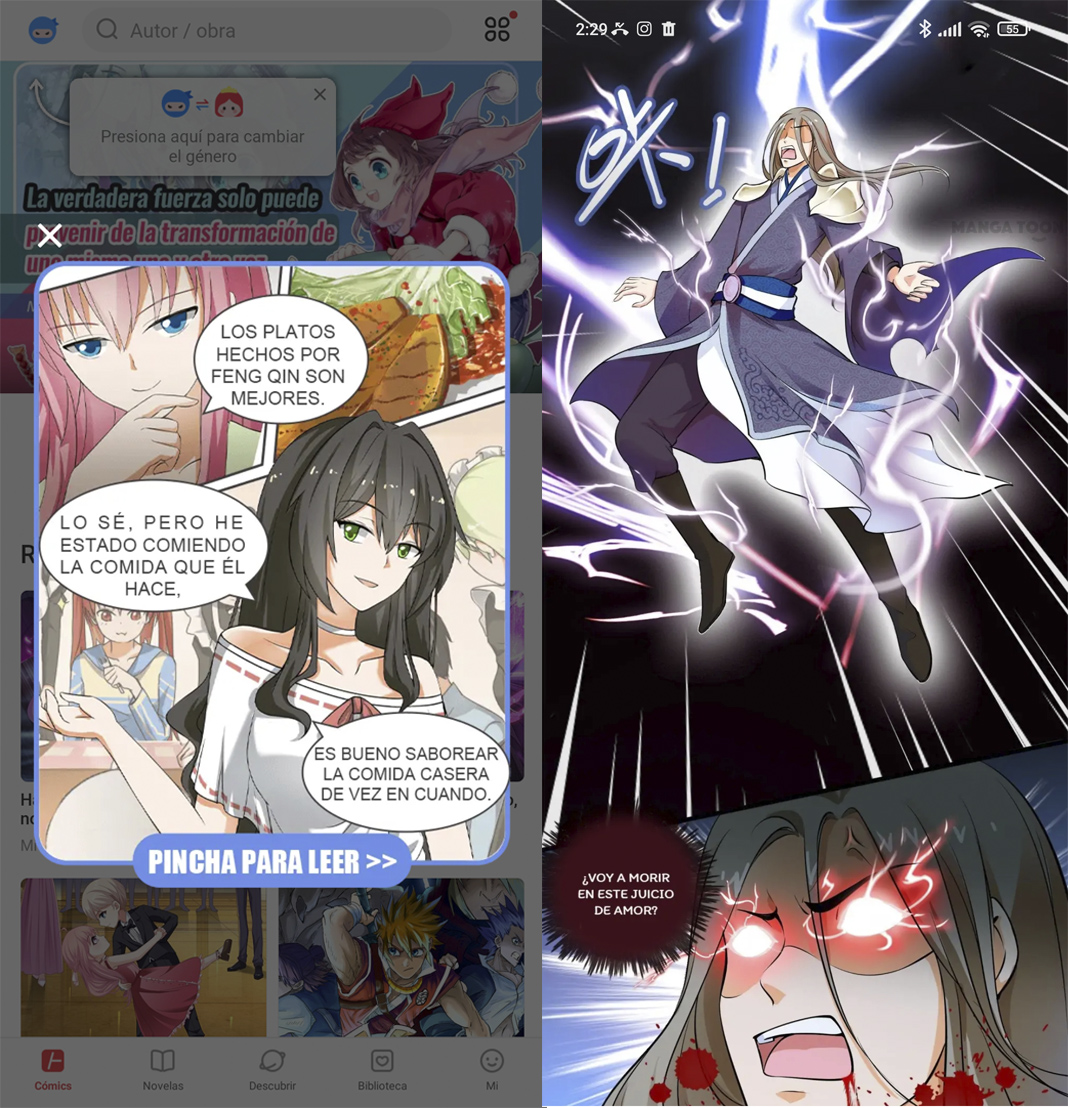 Unlike comics and mangas originally designed for paper format, the works featured in MangaToon are specifically designed to take advantage of the visual possibilities offered by mobile devices, so be prepared to swipe between simply spectacular splash pages.

Read the best manga legally and for free with MANGA Plus