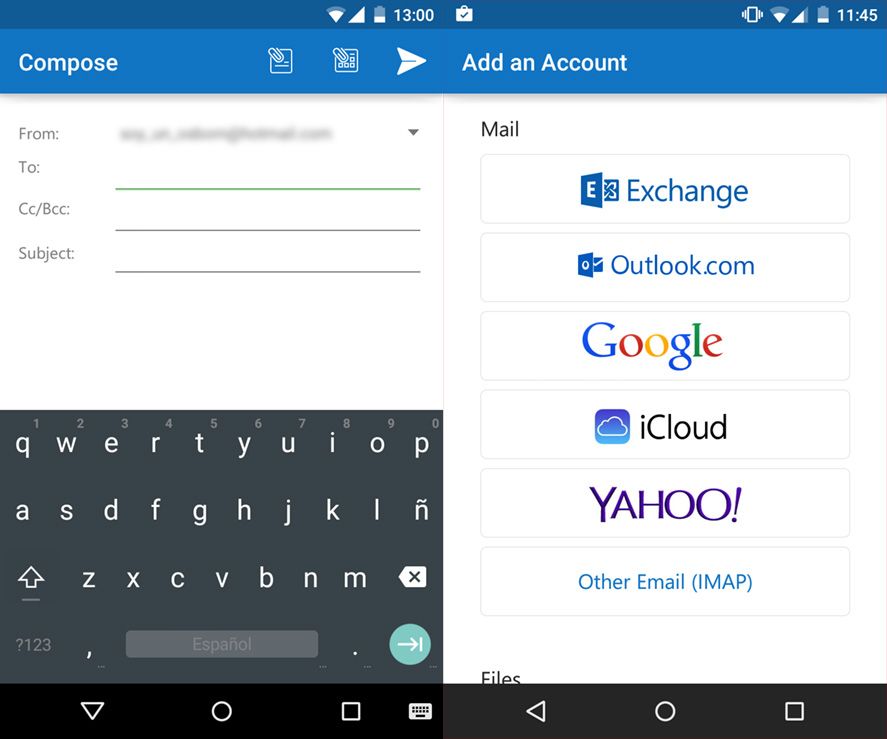 Somebody somehow has to try to battle Gmail and its colossal market share, and Microsoft is clearly giving the job its best shot. It’s recently launched a new revamp of its official Outlook for Android client that’s designed to serve as your main email app for all accounts. Its option to add external accounts and its integration with other MS services like Office and OneDrive are a few of its strong points.

When you go to add a new account you’ll key in on Microsoft’s intentions: it has native and automatic support to add Google, Yahoo, and even iCloud accounts, and you can also associate and sync it with cloud storage services like the aforementioned OneDrive or DropBox. Obviously it also serves as a generic email client via POP and IMAP protocols. The other novelty lies in its division of your inbox into two main groups, splitting your emails into ‘Spotlight’ and ‘Other’. The first covers notifications, alerts, alarms, and non-automated emails in general, while the other will hold any newsletters or promotions. Everyone’s Hotmail and Outlook accounts have always tended to be their secondary inboxes where they accumulate a lot of junk, but this maneuver aims to shake up that tendency. This move leaves the previous Android app (called Outlook.com) out of the loop, despite the fact that it was only a few months ago that it received a facelift itself, and unifies all of Microsoft’s main services for Android into this new version. In fact, when you add a native account it will ask you if you want to sync all your stored data, including calendar alerts or your contacts history (where you might find a whole army of undead friends from your old MSN Messenger days). Microsoft continues to have a hard time keeping a brand alive with so many years now behind it, and so do its users. That said, it’s not for lack of trying.

Outlook 2.0 for Android gets a complete design revamp