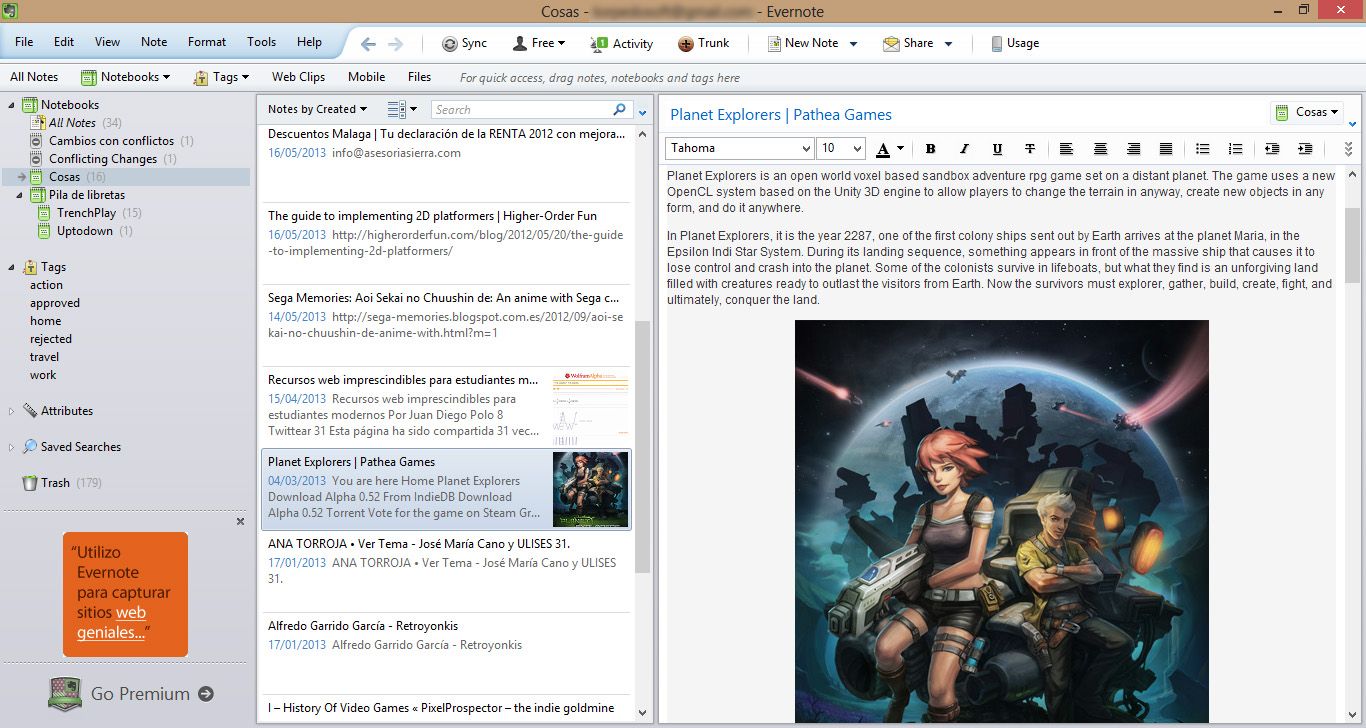 Although thanks to the Internet you have all the information you can possibly imagine at hand, sometimes it turns out to be rather difficult to categorize and remember everything you’ve seen online later. Hundreds of links, photos, and reminders can eventually make the “favorites” folder in your browser too unwieldy to handle. A good way to organize all this content in one place is to use Evernote, the best personal information organizer out there today, which has recently released its new version 5.0.

These days you can find Evernote on practically any platform as well as through its own web app, with current versions for Windows, MacOS X and mobile versions of iOS, Android, Windows Mobile, or BlackBerry OS, on top of its own browser extension called “Web Clipper.” The latter is without a doubt one of the most interesting ways to comfortably use the app while browsing. In fact, recently several unofficial clones have appeared for unsupported platforms such as NixNote for Ubuntu.

Basically, Evernote is a resource cataloger that can instantly and tidily store in organized lists all your links to external web pages, pictures, or your own notes. When you first open the app, you’ll quickly realize that it operates using two key elements: Notebooks and notes. The first of these are the containers or “folders” that you can create to hold all the information you want. So, for instance, you could create Notebooks called “Recipes,” “College Notes,” or “Office documents.” Within each you can put all the notes you want and even create Notebooks Stacks just like you’d use a standard folder system. By clicking on the “File” dropdown menu on the top menu bar, you can create your first note in the desired Notebook. This will bring up a writing space not unlike the interface of any word processor. You can name the note and add whatever content you want, whether it’s written text you’ve written yourself, links, or photos. For the latter, you simply have to drag the desired media content to the window with the new note, or use the clipboard.

This lets you keep all your stuff organized and cataloged, and most importantly—the feature that makes Evernote so useful—you can sync all your Notebooks and notes on all your devices, so if you capture a link on your smartphone or add any note on it, you can later access that content from any other device using any of the other versions of Evernote.

The potential of Evernote Web Clipper

Although it’s also a powerful tool to keep those hard-drive folders called “My Stuff” from getting out of hand, the main point of Evernote is to compile information as you browse in order to keep your browser bookmarks from falling into utter chaos. For this, the best alternative is to use its official browser extension, which is available for Chrome, Firefox, Opera, Safari, and Internet Explorer.

Once the add-on is installed, you can right-click on any text or image and capture this information to enter it directly into Evernote without even opening the app, so you can easily store all the content you want while browsing and sync it automatically with the application.

You can also adjust the format of the information that you want to capture: if, for example, you’re reading an interesting article on a webpage, you can copy the entire webpage into an Evernote note, or just the text box where the text in question is located. Customization is the name of the game here.

This text capture feature is an ideal way to store texts and then read them offline later. As you can see from all the options available on Evernote, the program isn’t actually confined to performing one specific task; rather, you adapt the program to your needs: bookmarker, notepad, or image gallery can be some of its many uses. If you add to all this Evernote’s social capabilities, which allow you to share your Notebooks and notes with other users, as well as the paid version for businesses that facilitates online team projects, it becomes clear that this service is an all-purpose tool.