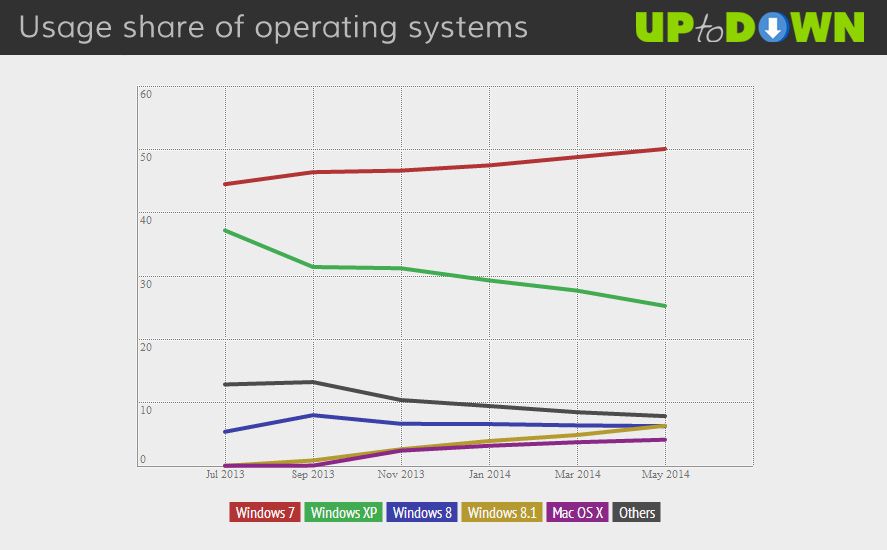 It will soon be two months since official support for Windows XP was withdrawn, and according to NetMarketShare figures, user migration to more modern operating systems is going slower than expected. As of May, Windows XP remained installed on some 25% of desktop computers, with Windows 7 instead of 8 seeing its share of migrating users increase.

The graph below shows that the fall in the number of XP users has not been linear, and it almost seems like the decrease in users will soon stabilize at around 20% of the total. At the beginning of 2013, this number was practically at 50%, but the decrease in the last six months has been less than six percentage points. It’s clear that many users aren’t even aware of the withdrawal of support, or simply haven’t gotten carried away in the panic that Microsoft is apparently trying to spread. Of course, the truly interesting thing is that the natural successor is not turning out to be the one planned. If you focus on the increase in the share of Windows 7 and 8, you’ll see that the growth is occuring at the same rate for both. Taking into account that Windows 7 was launched in 2009, the result is that users are getting cozy with an operating system that has already gone through practically half of its life cycle.

The most worrisome thing is that Windows 9 (or whatever it turns out to be called) will arrive to the market in less than a year, while the 8.1 update has only been snapped up by half of all Windows 8 users despite the fact that it’s free. Is the life cycle of its operating systems starting to get out of Microsoft’s hands? Are users getting sick of having to update their computers to end up with the same thing—or even worse performance if their hardware is not up to scratch?

We’ve already seen that this situation is not for lack of alternatives, and in most cases, if you want to use computers with obsolete architecture, the best option is to turn to operating systems aimed at modest computers, since the requirements for the most recent versions of Windows will make them unfeasible. Instead, the recent Linux Mint 17 and Elementary OS step in as worthy successors. Check them out.

Linux Mint 17, the most popular distribution, is now available for download

How to install Elementary OS, the trendiest Linux distro