Home News and Updates A new, totally revamped client for Tumblr on iOS and Android 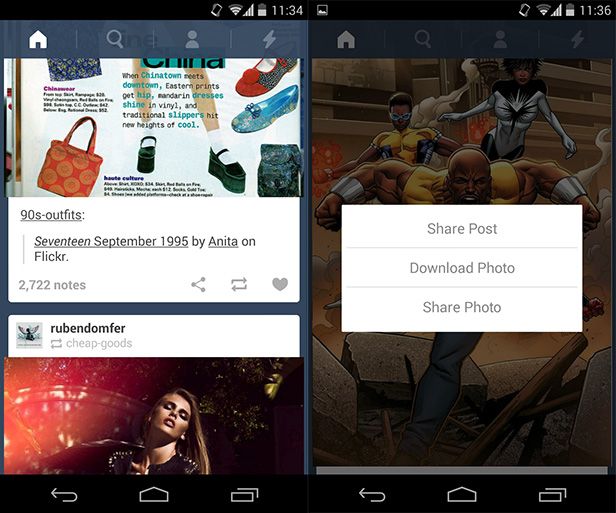 The Tumblr microblogging platform seemed not to care much about its old interface look, but they’ve just given a complete facelift to its app on both the visual and the internal operation levels. The new 3.6 version is now available for iOS and Android with improved battery management, new customization options and features that till now had been reserved to the desktop version.

Novelties in the new Tumblr app

The interface’s complete revamp, besides making the app easier to handle and nicer to look at, and your timeline loads much faster and those annoying failed loads and even unexpected app shutdowns that used to happen disappear. Now when you click on an image a new context menu will appear where you can share the image or download it to your device. The “Discover” menu has also been reorganized, making it much more practical to search for content.

But undoubtedly one of the most welcome improvements comes to the custom options for your channel, limited till now to the desktop version. Although you can’t completely personalize it, you can at least edit your “featured” header image from your phone, as well as your profile picture and description.

What is Tumblr so awesome?

“Wasting time” in the broadest (and sweetest) sense of the word. If you’ve ever been on Tumblr it’s more than likely that you’ve fallen into the trap of a scroll-down that becomes almost infinite with its cat videos, animated film gifs, and ridiculous montages made by people with way too much time on their hands. This comforting experience of consuming multimedia content in a linear format and in small doses has not been able to make the leap to smartphones, something that other similar networks like Instagram and Pinterest have managed to do perfectly. Now it appears that Yahoo has taken the reins after its acquisition of Tumblr last year and introduced this new design.

At the beginning of 2014 some 160 million Tumblr blogs were counted, with a growth of 120,000 new users per day. Microblogging is trendy, and even more in this case if you take into account that this multipurpose platform lets you mold content to your needs. Whether you use it as a personal blog, an image gallery or just to post various bits and bobs, Tumblr still has a lot of mileage left in it.

Tumblr now includes stickers and filters in its app

Tumblr will start including advertising on its mobile applications