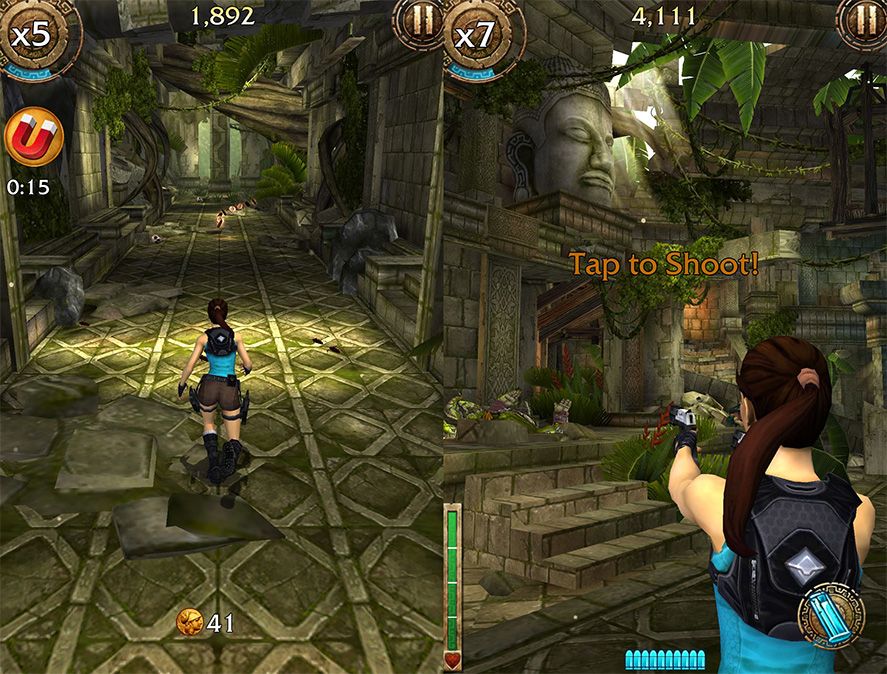 The endless runner subgenre has became a favorite on mobile devices thanks to games like Jetpack Joyride, Subway Surfers, and, above all, Temple Run. Precisely the setting of the latter perfectly matches those sexy pulp adventures that we usually see in the Tomb Raider saga—hence the recent launch of Relic Run, a free-to-play game for Android starring Lara Croft, who jumps, shoots, and drives vehicles in randomly generated linear settings.

The premise of this kind of game is the same as always. You do touch gestures to dodge obstacles, although in this case the gameplay avoids the tedium of repetition by going even further, as besides moving laterally to swerve from one lane to the other, duck, jump, or do parkour on the side walls, there will be sections that put you in all kinds of other situations: sometimes you’ll drive a buggy or a motorcycle, other times be chased by the mythic T-rex from the first installment or hang by a rope from a cliff and run along the side of a mountain, or even, for a complete change of gameplay, shoot the bad guys as if you were in a shooting range. During the advance you’ll find coins to increase your wealth, with which you can buy credits in the ingame shop such as weapons upgrades or outfits, which, as usual, you can also get with real money. Nothing new under the sun beyond the possibility to link your Facebook account to send ‘curses’ to your contacts and spice up the social component and competitiveness of the game. The game is not composed of a single setting: when you’ve collected a certain number of the idols randomly scattered around the scene you can unlock new levels. At the moment there are three available, but these should expand with time. The appeal of this kind of game is obviously offering new content over the long term to snag the assiduous gamer. The Santa hats are sure to come out soon for Lara and the other stories in this much-exploited business model. Even still, the game is nice-looking, challenging, and fun, which is something to be said for a game these days.