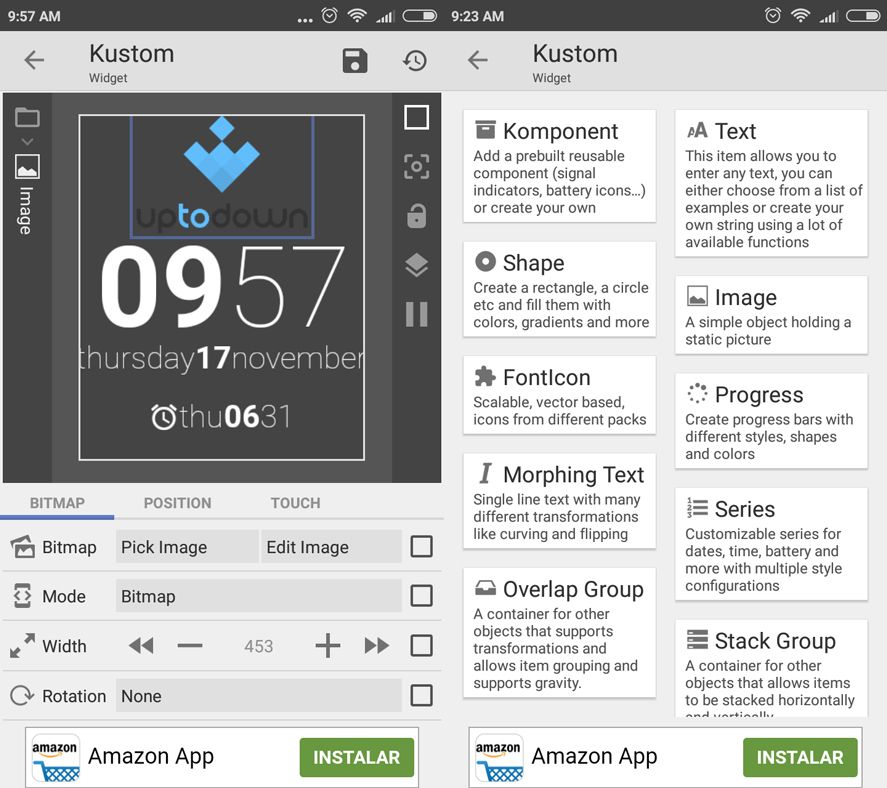 The Android system offers broad scope for customizing your device. The number of features that can be configured to your tastes is gargantuan. The sole “but” is that your creations depend on other people. Lots of time you can’t achieve what you have in mind because creating it is beyond your technical knowledge. But with KWGT Kustom Widget Maker you know longer have an excuse: this complete system lets you create widgets to use on your desktop or lock screen. KWGT Kustom Widget Maker lets you create widgets that are fully configurable to your needs. And I do mean fully – it’s actually incredible how many things can be done with this app. The editor is super complete and the possibilities very broad. You can fiddle with all sorts of attributes to create the design you want for your system parameters like the time, date, calendar, time, or battery status, among other things.

The first step is to create a widget based on one of the available ones in the series and set in on your device’s home screen. It’s later, when you tap that widget, that you enter the magic world of KWGT Kustom Widget Maker. It’s got a good set of presets to pick from and start working on an existing widget, but you can also start from scratch if you want. The editor works with a layer system that’s reminiscent of Photoshop. Each of the graphic elements that make up part of your widget gets configured individually. The customizable fields range from the graphic components (images, text) to other parameters like the position and size and whether it’s touch-interactive. The array of things you can do is really quite jaw-dropping. You can also import PNG, JPG, WEBp, and SVG images so you can bring your own designs to the application.

Its user community is in constant growth, and if you get stuck somebody can throw you a line, whether by sending you to one of the available tutorials or explaining a solution directly. You can’t really get a good idea of the possibilities in KWGT Kustom Widget Maker until you check out what other people have done with it. KWGT Kustom Widget Maker is surprising because it makes a simple task of something most people assume is complicated. I never thought I’d find myself creating a widget in my life as I always thought it would involve fiddling with a million bits and bobs, and to a certain extent that’s true, but the interface on this app makes things simple and clear. The app has ads but you can always opt for the PRO version to get rid of them and there are also certain Premium packages with extra features. But it’s nothing dramatic given that 95% of its potential is open in the free version. As Biggie Smalls would say: The sky is the limit.