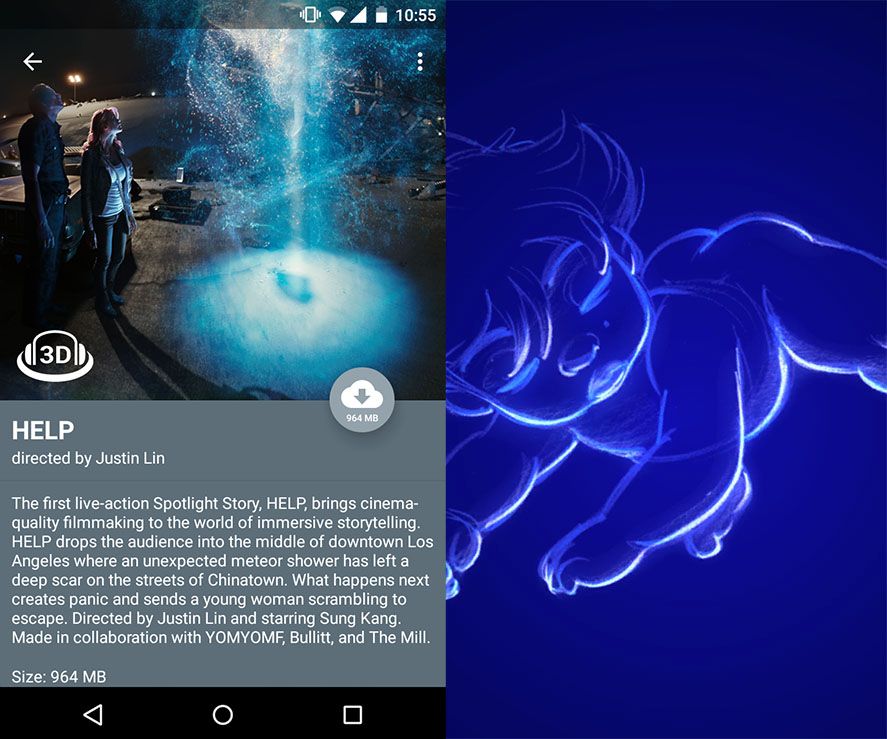 Several months ago everyone was talking about immersive video for mobile devices. This technology is in line with virtual-reality glasses in terms of the movement of the camera controlled by gyroscopic sensors. This makes it possible to play 360-degree videos where you can control the framing of the image in real time. In this new Spotlight Stories application Google has brought together several short films that use this technology, and to view them you only need your smartphone.

Anyone who’s flirted with Google Cardboard, also known as a ‘piece of cardboard stuck to your phone,’ will have seen that short with the mouse and the hat in the forest. Windy Day was born a couple years ago as a technical demonstration of Moto X from Motorola, and is now one of the videos included in the app, Buggy Dayo Duet by Glen Keane, an adaptation of this technology to a short done with artisanal animation than can also be seen on YouTube. But the main attraction that they’ve been using to promote the launch of this app is another film. Help is an ambitious short filmed by Justin Lin, famous for, among other things, directing the latest installments of the Fast & Furious saga. This live-image science fiction short was filmed exclusively for use with this technology using nothing less than cranes mounted with four cameras that cover all angles with 6K resolution. Although the download takes up almost 1GB, the experience is incredible and gives you an idea of what the future could hold if this idea of immersive filming really takes hold. This technology was baptized the ‘Spotlight Stories’ and elaborated by the development group ATAP (Advanced Technologies and Projects), the development and innovation department of the company born in the bosom of Motorola and folded into Mountain View before being acquired by Lenovo. These business maneuvers aside, it’s true that this technology could open the door to creating virtual reality experiences without needing expensive devices like the Oculus Rift. In fact, a good real-time streaming system together with a gyroscope control mapper could make for a more than acceptable immersive experience with the hardware you have at home. The future of virtual reality lies in making it economical.