Home Tutorials and Guides How to uninstall an antivirus from your computer without dying in the... 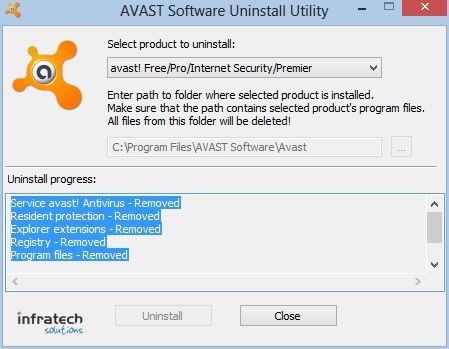 Antiviruses and other tools for getting rid of malware are a very “special” type of software. Being deeply integrated into your operating system so that they can correctly fulfill their disinfectant function, they tend to be highly tricky when it comes to uninstalling them, not to mention the conflicts that can arise when you have several installed at once. Here are a few tips and tools to rid yourself of them once and for all.

For the first try, CCleaner is your friend

Before moving onto the heavy artillery, you can try to uninstall the program manually. If you can’t do from the “Add or remove programs” menu in Windows, you can try using CCleaner, the essential tool from Piriform that we’ve already mentioned on this blog countless times.

The first thing you have to do is start your computer in safe mode, and once you’re there, deactivate the firewall in real time for the antivirus you want to remove. Depending on which antivirus you’re using, you’ll likely find this command somewhere on the interface, although in most cases it’s as simple as right-clicking on the taskbar icon and searching for that option on the context menu.

After this, you’ll access Tools > Uninstall Programs and proceed to the uninstall process. Next, it’s more than sensible to clear out your system registry of obselete entries. To do so, you’ll start the cleaning process in Registry > Search for problems. After this, taking advantage of your momentum, you can clear out your temporary files by going to Cleaner > Analyze.

Then, after all this, you’ll restart your computer in normal mode and double-check the results. What a sec, is that goddamn program still installed? This means war!

If all the foregoing hasn’t worked, there’s no need to throw in the towel: there are still a huge number of specialized uninstall utilities for particular antiviruses. In fact, in most cases these are programs created by the antivirus developers themselves in full knowledge of the problems their softwares sometimes cause. Look no further than AVAST!, which has its own self-made tool for erasing its products. The official Microsoft Answers website has compiled an enormous list with all the uninstall programs for the most popular antiviruses, such as AVG, BitDefender, Avira Antivirus or McAfee; in total, 26 well-known companies with their different versions.

Another good alternative is to use specialized tools to delete this type of software. One of these is AppRemover, which can get rid of all sorts of anti-malware in one fell swoop, as well as other types of “conflicting” software such as file-download programs and tools for creating backup files or toolbars. Given that it’s much better to prevent than cure, it’s always helpful to remember a few things before you have to turn to the foregoing advice. The most important and fundamental thing: Don’t have more than two malware-removal tools of the same type running at the same time. That is, it’s perfectly fine to have one antivirus, one anti-spyware, and one external firewall, but not two of any of these.

A final word of advice comes from good common sense: you should completely eliminate the tool you want to uninstall before proceeding to replace it with another, which entails getting rid of every trace of its existence by using the aforementioned CCleaner and the specific uninstall programs. Even still, unforeseen incompatibilities can arise anyway between an antivirus and any other type of software. When that happens, not even the cleverest of techies can avoid consulting our best mate Google to find out what other users have done.