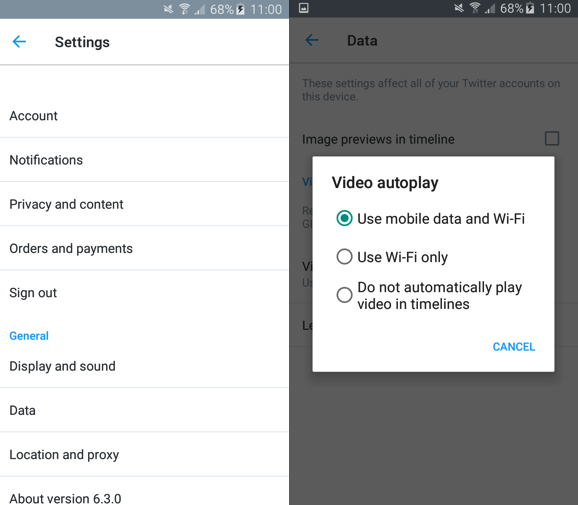 If you’re on Twitter more often than not, you’ll likely have noticed that the official Twitter client for Android eats through your monthly data plan like there’s no tomorrow. One of the main culprits here is the app’s indiscriminate consumption, especially now that video is now more widely supported in the insidious form of GIFs and other animations that are all the rage. But, did you know there is a way to opt out of this? By default multimedia data saving settings are deactivated upon installing, but this is easily straighten out with just a few quick taps on your settings menu. Above is our main evidence to the crime. Head to Settings > Data Usage, and have a quick look at the list of apps below this graph, and you’ll soon notice that Twitter is among the highest on this list. If you tap on it you’ll gain insight to the percentage of data usage compared to your overall total data usage. In this case, over the past 30 days about 45% of my data plan was eaten up by Twitter. In net numbers that’s around 517Mb of the 1.14Gb of my whole plan. Even more surprising is the fact that of these over 500Mb, a whopping 63Mb were used when Twitter was running in the background. Evidently this number varies depending on the number of accounts tied to your app. That being said, head on over to your to settings menu with Twitter and hit Settings > Data. You’ll soon discover that sure enough, the most worrisome part of this process is that it’s automatically set up to download and play every single video that shows up on your timeline–whether you’re on WiFi or not. From there, tap on the dropdown menu and select whichever preference caters to your particular needs. In this case, it might be a good idea to switch off automatic video replay in order to avoid a certain intrusiveness on your browsing. If you want to watch something, I’m sure you can handle tapping on the video yourself in order to start streaming it.

Taking things a step further, from the same Data menu, you’ll also be able to hide images that are shown as a preview, but this one is only really helpful if you’re under a data or connectivity crisis and can’t handle or for other reasons relating to decontextualizing