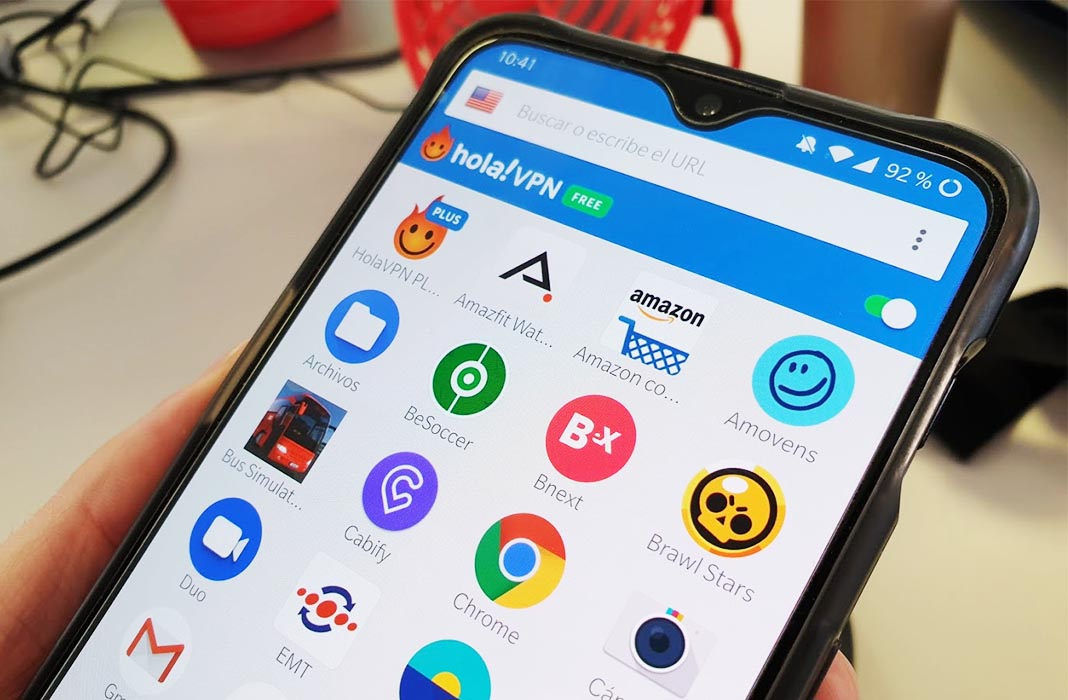 There’s probably been a time or two when you’ve worried about your safety when browsing using a public connection. That’s why it’s highly recommended to use a VPN. A virtual private network is a technology that allows the creation of an encrypted internet connection, making WiFi connections much more secure. We’ll explain the multiple uses of this type of service and some of the most well-known apps to use on Android. 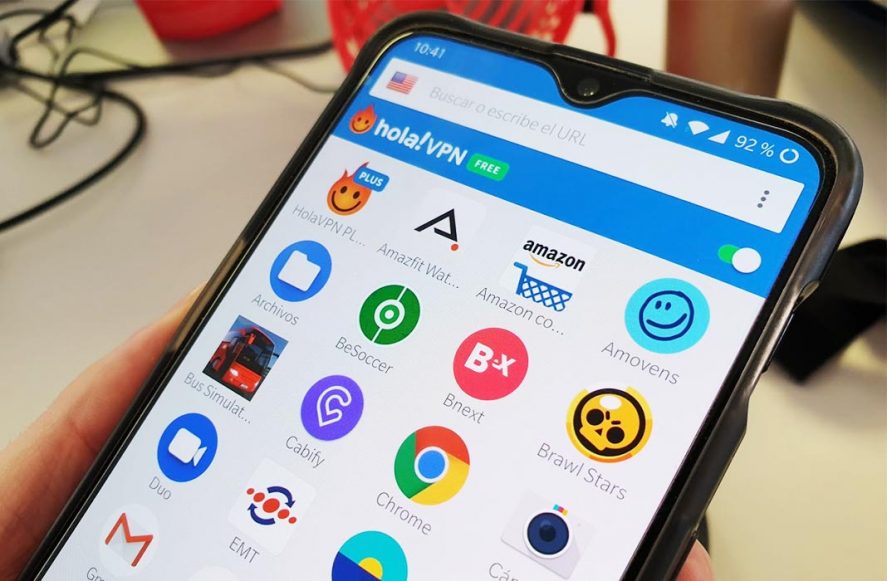 Functions of a VPN

How to start your own VPN connection from an Android device

Creating your own connection to a VPN server is easier than you may think. There are different apps to help you do so, but you have to carefully choose the best one for your circumstances.

You can find apps with different features, paid or free, with or without traffic limitations. But the main thing to consider is that the free ones tend to require in their “terms and conditions” the user’s consent to use their own IP. From this moment on, your IP can be used by users from other countries who want to connect to the country of this IP. Lets just say the price is to use your own location as an external node of the VPN. “Today for you, tomorrow for me.”

We’re going to explain the process to get connected using the three most famous programs:

Also known as Hola Better Internet, it’s a private browsing tool for Android. One of the app’s strong points is that it doesn’t have any limitations in terms of the traffic you can use. Plus, it has a great number of servers from numerous countries to choose from to connect through, and a user-friendly interface where you can associate a virtual location with each one of the apps you have installed. 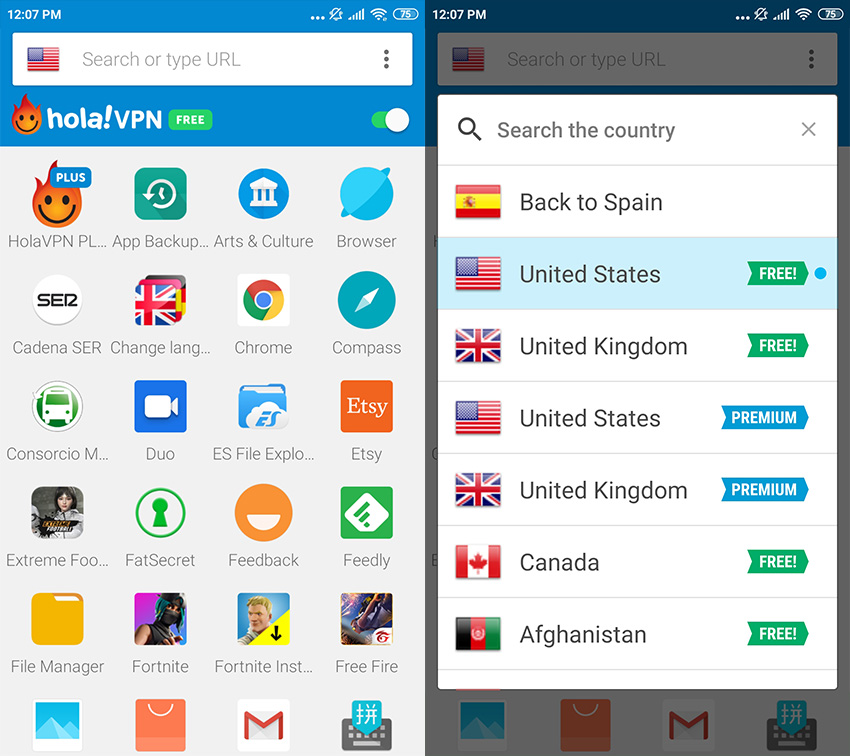 The app works as a browser thanks to the address bar at the top, but its biggest strength is in the possibility to use a VPN from a specific country for some of the apps you have installed. To do this, you simply have to choose the app in question and then the country you want to appear to be connected from.

This app is widely renowned since it doesn’t make a traffic exchange to fund its free version. In this case, it gives you a limited number of megabytes to use per month (currently 500MB), so if you run out, your only option is to access one of its paid plans. You have the option to pay annually, reducing the monthly cost to about five dollars. 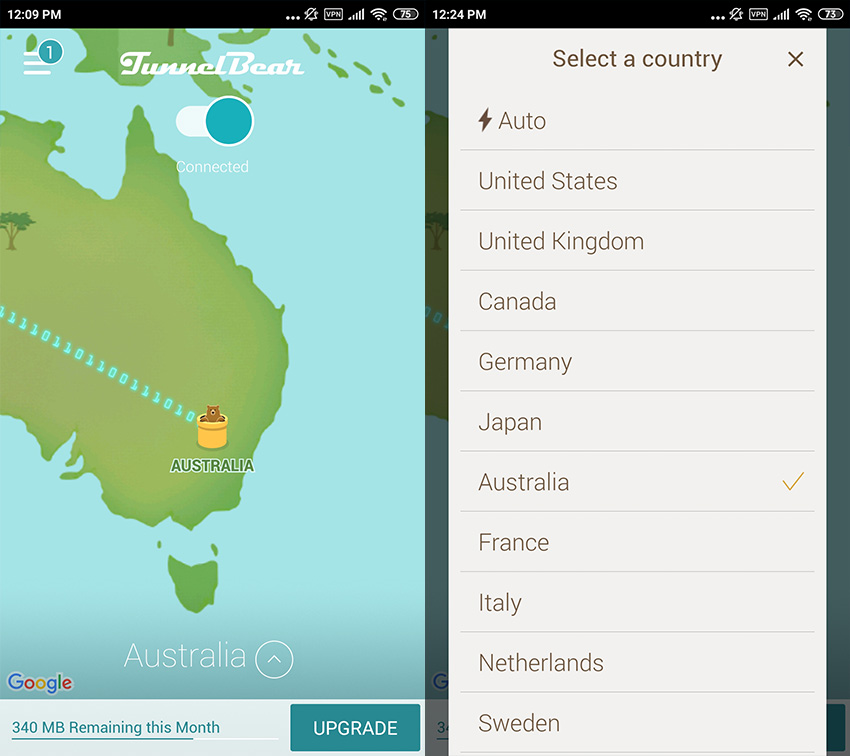 Once you’ve signed up, you’ll see a map of the world and a bear standing on the country where you’re located, along with a series of tunnels on the countries where the app is supported. To the left, there’s a slide-out menu where you can see “Free TunnelBear,” referring to the fact that you’re using the free version of the app. From there, you can change some settings, like the apps on your phone that you want to use with TunnelBear, sound options, the possibility to interrupt the connection if you run out of megas, add trusted networks, etc.

To create your VPN, you just have to choose the country where you intend to simulate a connection from, find it on the map, and tap on it. Once you’ve done this, the app will ask you if you want to create a tunnel to this location. If you accept, the bear will start digging a tunnel from your country to the one you’ve chosen through a simulation. From that moment on, as far as your phone is concerned, you’re physically in the country you’ve selected.

In recent times, its popularity has skyrocketed since it’s one of the few VPN services that has been able to make it possible to play the successive betas of the highly anticipated Call of Duty Mobile for Android. Its interface is similar to other other similar tools except that in addition to letting you connect to different geographic locations, the interface also includes some pre-set configurations for games with regional blocking like CoD Mobile or PUBG Mobile Lite. 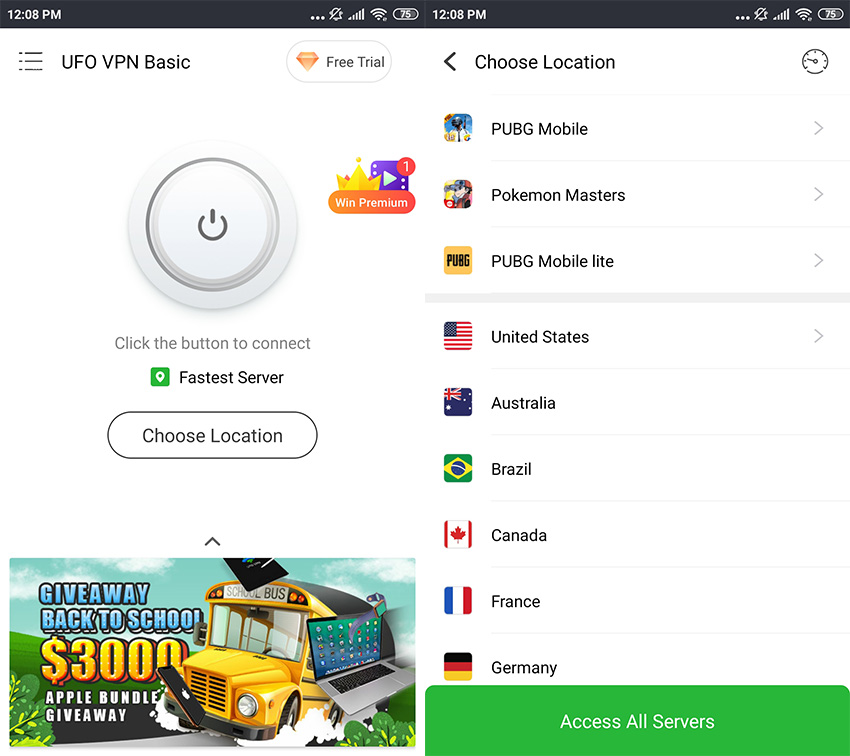 How to use Android apps that are blocked in your country

How to get around regional restrictions on a webpage