Home Internet How the iPhone 4S Will Change Mobile Gaming… 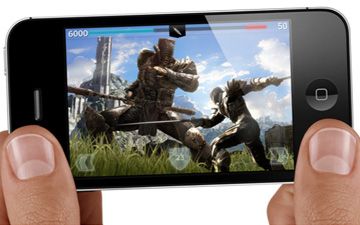 At the “Let’s Talk iPhone” event, Apple may have revealed an iPhone 4S physically similar to the iPhone 4, but which represents a major leap forward in smartphone performance. This will be most noticeable in gaming, the most used of smartphone apps. The iPhone 4S is powered by the A5 processor, which contains 512 MB of RAM, identical to the iPad 2. Apple claims the A5 has twice the processing power and seven times the graphics speed of the A4 chip that powered the iPhone 4, the original iPad and the iPod touch 4th generation.

What do today’s more powerful features mean for the future of iOS gaming? The A5 devices can now accommodate games that rival the graphics and complexity found on consoles. Furthermore, many current games will now be able to support better graphics on the A5 chip; games such as Infinity Blade and Dead Space were updated to support the improved capabilities of the A5 when the iPad 2 was released. It’s likely other games will get similar updates with the release of the iPhone 4S.

Three particular technologies will highlight the A5 chip’s capabilities.

First, the Unreal Development Kit allows developers to utilize the powerful Unreal Engine, which powers many PC and console games (most notably the Gears of War series), for iOS games. The Infinity Blade 2 demo at the “Let’s talk iPhone” event demonstrated the console-quality detail users can look forward to. Alongside more powerful hardware, full-fledged console and PC-style Unreal Engine games on iOS are now a reality.

The second technology is Unity. While this engine has been used in iOS games for years, one recently released game illustrated the engine’s console-quality capabilities: Shadowgun. This game features an impressive level of detail, even on A4 devices, but even greater quality when played on the iPad 2′s A5 chip. Hundreds of 3D games use Unity as well; look forward to their impressive visuals thanks to A5 chip technology.

The third and somewhat unlikely candidate is Flash-based gaming through Adobe AIR. The point-and-click adventure game Machinarium was recently ported to the iPad 2 using Adobe AIR. These types of games may need the A5 chip to run properly on iOS, so the new iPhone 4S will open a much bigger market for them. And, Machinarium managed to reached number one in the iPad App Store, despite being limited to iPad 2. So restricting support to only A5 devices is not necessarily a detriment to sales. More popular hardware-intensive Flash games will be making their way to iOS.