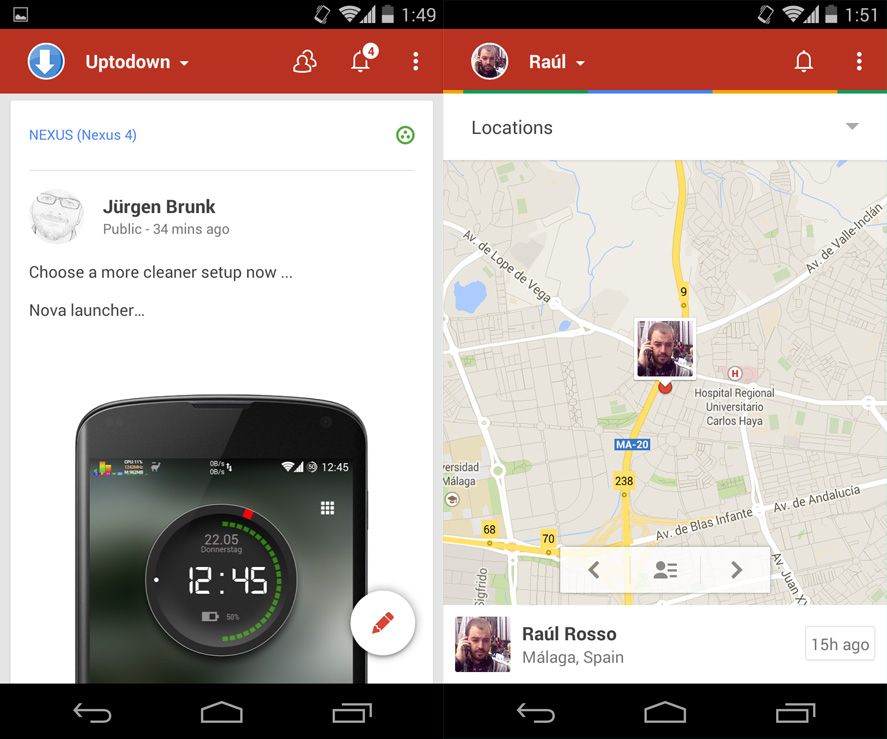 Google Plus has been going through a small internal crisis recently after the departure of its creator Vic Gundotra from Google. After this first big leadership shakeup in the company comes the launch of the new mobile version of Google+, which includes a thorough redesign and new features.

Say goodbye to the left pull-out menu, which is now integrated into the upper toolbar in the form of a drop-down browsing menu where you can access each of the sections and switch between the different acccounts you administer as well as the three complementary tools: photos, locations, and events.

When it comes to browsing, the experience is much more immersive since the upper bar now disappears when you scroll. Space has also been freed up by the redesign of the posting bubble as a small floating icon from which you can pull out the post form to share text, photos, videos, and links. This new feature aims to consolidate the relationship between Google Plus and your smartphone’s features. If you have photo-syncing and location services activated, you’ll have the option to generate dynamic galleries based on life events.Have a look here to see what this feature can do.

You’ll see the event photos alongside the time, date, and place each one was taken, and the comments referring to each snapshot, all laid out as a multimedia album visible from both your smartphone and your browser.

A similar feature has also been added for videos to create so-called Auto Awesome Movies that will be automatically put together in the background based on the audiovisual content you’ve posted, in order to generate a complete video that can be uploaded instantly to YouTube. It would be impossible to imagine greater synergy between services.

Browsing through the app, you’ll come across many more new features, with some of them quite hidden in the absence of a firm development decision on whether they’re worth emphasizing. In the locations section, if you have Location Services enabled on your phone, you can view the location of your contacts on the map and even look up routes to take you to where they are.

With regard to your image collection, many photo galleries will now load much faster, and there are new filter options to find what you’re looking for by date or event. A ticker has also been added to show you how many members of your circles have viewed each photo. Alongside the images you’ll also see a new tool to create animated GIFs. This update marks a continuity break that changes the direction of many of the tool’s features in order to strengthen particular aspects like the photo system or the use of maps, possibly to bring the social networking app more into line with the basic functions of Android in an attempt to associate with the daily usage habits of smartphone users.