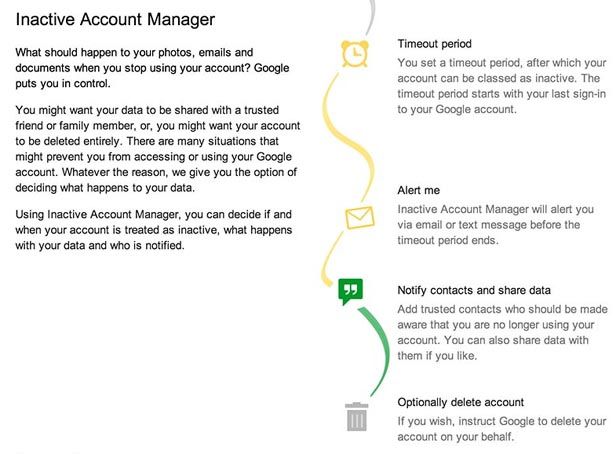 Not to make things gloomy, but it really is an important topic. What happens to your Internet life when you die? We’ve already talked about this topic when it comes to social networks, but there was still a largely unexplored part remaining: Google, which probably owns many of your accounts that have personal stuff (Gmail, YouTube, Picasa) and a lot of other information about you through Android, gives you options.

Google has created an option for exactly this reason, what they have called, rather unfortunately, Inactive Account Manager. It is a new service that allows you establish guidelines that Google will follow to the letter once your user account goes inactive for a certain period of time, whether it be three, six, or twelve months.

There are many options for what to do with your information. The most logical is that your information be erased from Google’s servers, which, on one hand, will keep a deceased individual from appearing on its services, and on the other, will help Google free up space on its servers. Even more interesting is the option to give all your information, from Picasa photos to emails from Gmail, to certain contacts. That is, you can leave a testament with a very important amount of information about your online life to whomever you choose. It’s a smart option, and within a few years it will undoubtedly create a controversy here and there.

So that there aren’t any problems with the service, it’s necessary that you do all this beforehand and that you confirm what you’re doing with Google through your associated email accounts, and also by SMS. That is, it doesn’t work once the person has died, but rather a way for each of us to organize what happens beforehand. Ultimately, it’s all very useful, but grim.