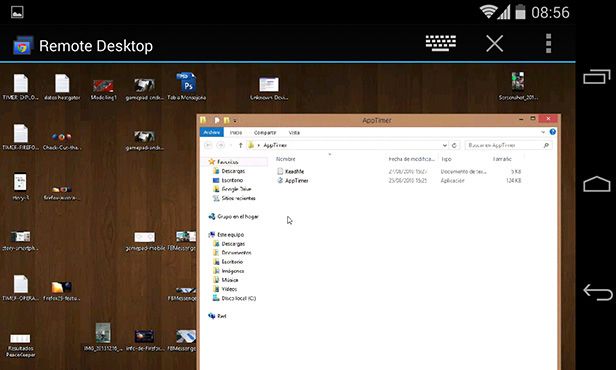 Although there are already several remote desktop applications out there, few are as intuitive as the new Chrome Remote Desktop, the new free tool from Google that lets you control any PC from another computer or Android device using a small Chrome extension.

What does it offer?

This is a cross-platform service, that is, it’s supported by various systems that can interconnect amongst themselves. Because it’s a Chrome extension independent of the operating system it’s installed on, it can run on both Windows and Mac OS or Linux,even if the computers involved have different operating systems. Another of the hidden weapons of Chrome Desktop is that you can connect to several computers from the same device, and can alternate between one system and another using the app itself.

The streaming system is very efficient, working just as well on mobile networks as on WiFi to the point that you can fluidly watch videos and even play certain games. Although the control is embedded in a Chrome extension, the viewing system takes up the entire desktop, even if you have more than one monitor connected. It shows practically everything that happens on the screen. The other advantage, besides the option to control the app from a smartphone, is the management of remote computers from a browser tab on another PC, making it an ideal tool to manage and repair computers remotely as you would with other tools such as TeamViewer.

How does it work?

Once you have the app installed on your Android device, you’ll have to install the Chrome extension on the PC that you want to connect. When you do, it will ask you for a six-digit PIN code that you have to insert from the app or PC from which you’re taking control when you start the connection.

When you use the mobile app, you’ll be able to control the mouse from your touchscreen, which you can move as desired to interact with the desktop. You can also pull out a virtual keyboard and even use the shortcut Ctrl + Alt + Supr from the context menu in the upper right part of the screen. You can also zoom in or out on the screen by pinching or separating two fingers in the area you want to see. One of the biggest problems with remote desktop tools is how uncomfortable they are to use when working with a touchscreen. But the ease of transitions on Chrome Remote Desktop makes working with windows or forms much more comfortable.

How to control your PC from your Android