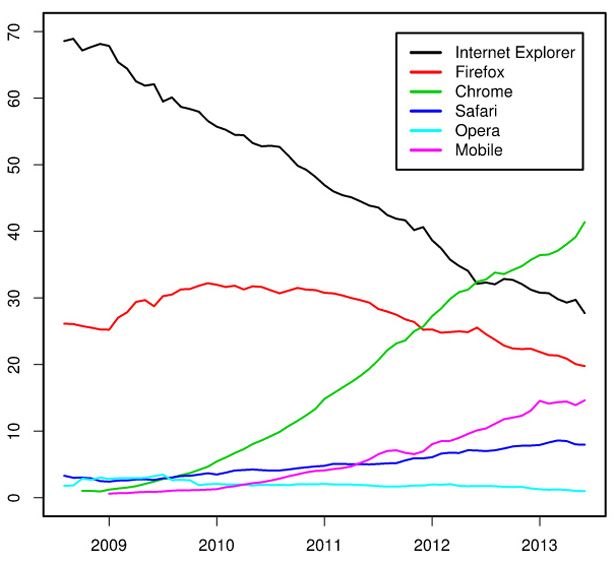 Google Chrome turns 5 this week. On this day in 2008, Google released the first beta of its own web browser for Windows. Since version 0.2.149, the browser has received hundreds of updates; has come out for Android, iOS, OS X, Linux, and Android operating systems; and has been translated to more than 50 different languages, having now become the world’s most-used web browser.

The early days of Google Chrome weren’t the easiest. All the competition had at least five years’ head start in which they’d jockeyed to build user bases ranging from small to large, with Internet Explorer in the lead. In its first two years, Chrome barely managed to win over 10% of Internet users.

The comfort, speed, and ease of use that Chrome offers made it slowly gain ground over other browsers, until in November 2011 it surpassed the number of users of the great Mozilla Firefox. Just a few months later, in mid-2012, the steep (and steady) decline of Internet Explorer, together with the continual progress of Google Chrome, finally resulted in Chrome’s accession to the top spot—a spot that it still occupies and seems set to hold for a good while, if the trends of the last few years are any indication.

One of the causes of the rapid climb in the number of Google Chrome users was the so-called Chrome Web Store. Thanks to this browser “app shop,” users had the opportunity to add loads of apps to their browsers with a single click. And, importantly, the developers could distribute their apps simply and quickly through an online shop with millions of potential customers. The success of the Chrome Web Store has been such that some high-profile videogame releases, such as those of Bastion (Warner Bros.) or From Dust (Ubisoft), have also been distributed through the platform. The enormous impact of the Chrome Web Store also helped Chrome become Google’s principal warhorse in its crusade to advocate the concept of the “cloud.” Google Drive, Google Music, Google Play Movies, Google Keep, and Google Play Games are just a few of the new fronts opened by the U.S. giant. All of them, to a greater or lesser degree, are grounded on the power of Chrome, which these days is the browser most used in the United States, South America, practically all of Europe, a good chunk of Asia, Oceania, and the north of Africa. Only China and central and southern are still resistant to Chrome—for now.

Although it was developed totally independently, the version of Chrome for Android devices deserves a special mention. Barely a year and a half after its release, it has already been downloaded more than 100 million times. Or to put it another way, Google Chrome for Android has been downloaded more than all the other browsers (Mozilla Firefox, Opera, Safari…) put together.