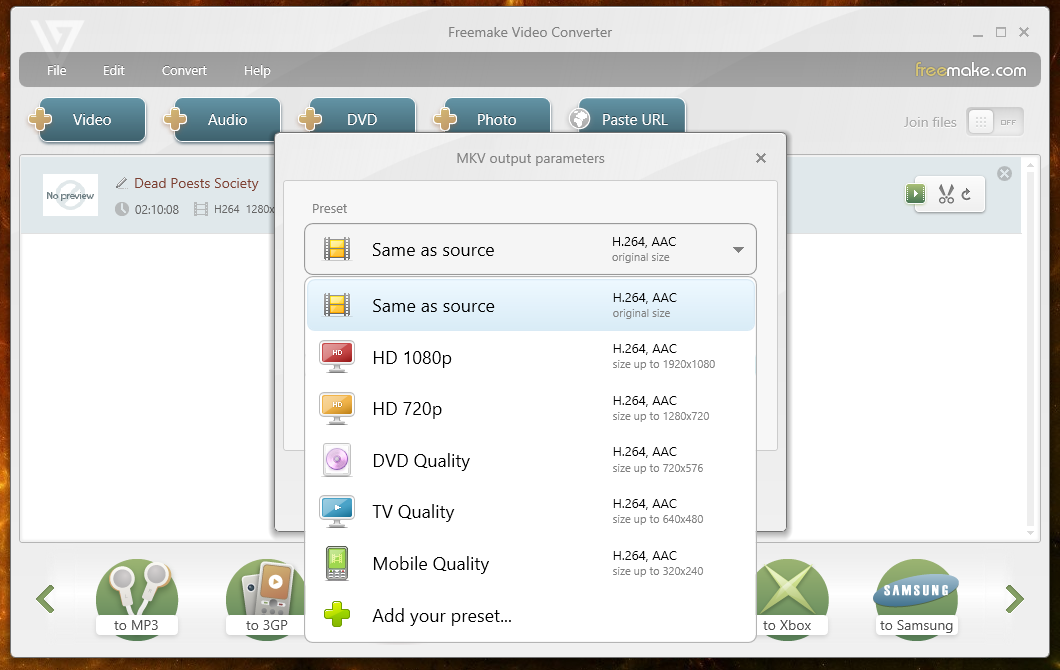 On Uptodown we have loads of conversion and video recode tools; so many in fact that in the end you might get a bit lost when you’re looking for a simple and efficient program for these tasks. Freemake Video Converter is one of them, and can change the format of your video or audio to countless different formats and containers, with dozens of included presets and a high recode speed for large-size files.

Its interface is admittedly a bit sparse on the flourishes. In the upper part of the window you’ll select the entry format in the multimedia file to be modified, whether from a video or audio file directly, a DVD, or a URL. Once the content has been added to the conversion list, you can select which part of the track you want to convert using the multimedia player itself. The third step consists of selecting an output configuration from among nearly a hundred included by default, organized by category. You can also convert to formats specific to certain mobile phones (Samsung, Nokia, BlackBerry, etc), videogame consoles (PlayStation 3, PSP, Xbox 360), FLV, MKV containers, HTML5, or Blu-Ray, among many others.

In addition, when you access each section there will be a drop-down menu from which you can select the output format, for both resolution and codec. Nevertheless, if you don’t find a preset that suits your needs you can always create your own, specifying the resolution, video and audio codecs, and number of encoding passes. Luckily, it supports modern encoders, such as the standard H.264, currently the one that offers the best results. Freemake Video Converter is available in 20 languages and is completely free. Its monetization system is based on the inclusion of suggested programs in the installer and the ability to acquire a Pro version with certain extra characteristics. All this makes this tool tower over other alternatives if, for instance, you want to reduce the size of a file or adapt its format to one compatible with a device.

The one thing left to mention is that it doesn’t include the option to rip from Blu-Ray disks, but other options for this do exist (such as Handbrake). Nevertheless, you should still take into account that many commercial disks include anti-piracy protection, meaning that you’ll need a hardware or software (in the majority of cases a paid version) to get around that barrier.

How to rotate videos shot on your smartphone